Before the U.S. Navy Blue Angels' aviation display at the Milwaukee Air and Water Show this weekend, the astonishingly agile Fat Albert will showcase its maximum-performance capabilities during a 10-minute demonstration. I flew on the support plane Friday, and it was incredible.

Don’t let the name fool you; Fat Albert can move.

The United States Marine Corps C-130T Hercules, affectionately known as Fat Albert, is the beloved behemoth without which U.S. Navy Blue Angels aviation performances wouldn’t be possible at events like the Milwaukee Air and Water Show.

The Blue Angels’ support plane, a four-engine turboprop military transport aircraft that weighs 155,000 pounds fully loaded, mostly carries logistical equipment from show to show, but its jaw-dropping (or, more accurately, stomach-dropping) routine has become a must-see attraction on its own.

Before the famous jet team’s display, the astonishingly agile Fat Albert – nearly 100 feet long, with a 132-foot wingspan and a max speed of 370 mph – showcases its maximum-performance capabilities during a 10-minute demonstration. I had the opportunity to fly inside the gargantuan aircraft on Friday afternoon, in advance of the Air and Water Show.

After signing medical waivers, listening to several different briefings and getting seatbelted along the perimeter of the massive cargo load, we were all handed the requisite motion sickness bags to keep our "souvenirs," as Demonstration Pilot Marine Maj. Mark Montgomery said. Our C-130, built in 1991, was the sixth edition of Fat Albert, as there's only ever one in service at a time.

As "Bert" taxied down the runway at the 128th Air Refueling Wing – a unit of the Wisconsin Air National Guard, stationed at General Mitchell Air National Guard Base – we watched in (eager, at least for me) anticipation out the still-open hinged loading ramp at the rear of the fuselage.

Eventually, the rear ramp closed up, and crew members took up their positions, standing, around the inside of the aircraft. Since you really can’t see out of Fat Albert – save through a few small porthole windows – and apart from looking at the either exhilarated or nauseated faces of your fellow passengers, these officers made for the best entertainment on the flight, as they fully exhibited the zero-gravity effect we experienced in the air. 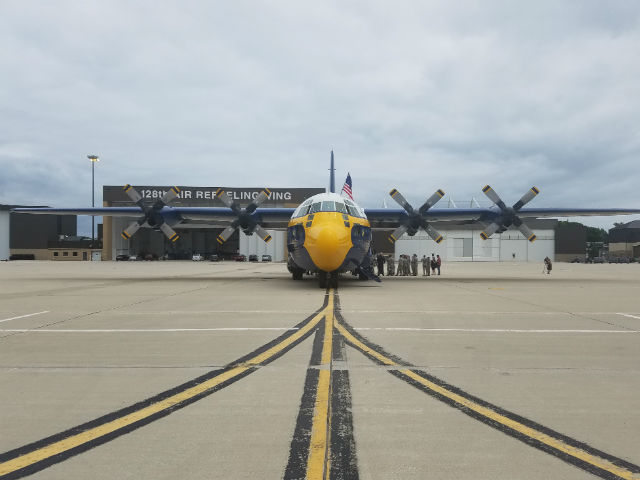 On the fierce takeoff, which simulates sudden escape from a hostile combat situation, the big-boned aircraft immediately went into a maximum-effort climb, nosing up at a 45-degree angle to an altitude of 1,000 feet. It was an immediate white-knuckle adrenaline rush, but once Fat Albert leveled out, it was a relatively calm next couple of minutes – surprisingly smooth and quiet, allowing everyone to look around, smile and laugh, presumably thinking, "that wasn’t so bad." As Marines took selfies, I chatted with the Air Force member sitting next to me about how it was fun but disorienting not to be able to see where we were going.

Mid-sentence, I was interrupted by the first major tactical move, a sneak maneuver from "behind the crowd" – the shoreline where the show-attendees will be watching this weekend – in which we suddenly dropped to 500 feet, and then did a parade pass along the lakefront. Once out over the water, away from the "show box" and with less-restrictive FA rules, Fat Albert was able to do a flat pass and get down low – really low, as in 60 feet over the water, and we could practically see those damned invasive zebra mussels.

After numerous hard banks, tight turns and sheer pulls, which are intended to avoid radar, got us to 2 g-force, our weights doubled and bodies pressed into the seats – my ribs felt like they were in my lap and my back was compressed – and a few people were using additional motion sickness bags. And then we had one last high-performance climb, a hard-striving ascent where we reached a maximum altitude of 1,400 feet (the clouds were at about 2,000).

Upon cresting at the top, on the pushover, we got our best zero-g – ultimate actual elation –a wondrous feeling of weightless floating, where anything that wasn’t held or strapped down zoomed toward the back of the plane. As one passenger’s loose ID and credit cards flew away, the officers standing in the middle of the aircraft, only holding onto a bolted ladder, flipped fully upside-down, gleefully whooping as they were inverted. It truly was an awesome experience.

Fat Albert concluded its flight with a short-field landing demonstration, a push-to-land approach downward at 25-degrees into a theoretical safe zone, coming to a full stop in less than 1,000 feet back on the 128th Air Refueling Wing runway. Once deplaned, we exchanged incredulous expressions, shook hands with the pilots and took photos with the crew.

Afterward, Montgomery talked about Fat Albert’s role, the representative purpose of the Blue Angels and what Milwaukeeans can expect this weekend.

"We represent the other services in the DOD – Army, Navy, Marine Corps, Air Force. They are people that are away from their families, people that are out there enduring hardships right now, in combat areas, and we represent them. This is a great chance to expose us to other parts of America that aren’t as familiar with the military.

"What we did today is the exact same thing that the guys can do in the fleet – that they do in Afghanistan, Iraq. We do it a little bit lower and in front of a crowd. We want people to enjoy themselves and relax and know that what they see is representative of what their armed forces are doing all across the country and around the world."