Let's talk about patriotism and the national anthem

The arranged marriage of patriotism, the national anthem and the American flag is completely broken. Anyone who can't see this isn't looking hard enough. So let's not just stand and mumble our way through the national anthem anymore. Let's follow our hearts and our consciences, and respect those who have a different viewpoint than we do.

I really didn’t want to write this. Even though it’s been on my mind since about 2001, I’ve held back, because I knew what kind of criticism I was in for. But it’s time.

The arranged marriage of patriotism, the national anthem and the American flag is completely broken. Anyone who can’t see this isn’t looking hard enough.

It first struck me when baseball teams asked us after 9/11 to stand and remove our caps for the singing of "God Bless America" during the seventh inning stretch. Irving Berlin's moving song, written 99 years ago, is great. But the national anthem it is not.

It’s a good question. There’s no reason patriotism should be displayed only before sporting events. And now we must consider whether standing, removing our caps and putting our hands over our hearts really demonstrates one’s patriotism at all.

In some countries, of course it does. Their flags are a symbol for absolutism: Either you love your country or not, because you’re not going to change it. Take it or leave it, assuming you’re allowed to.

But in America, we have a more upstart mentality in our young democracy. We hold our freedoms so dear that even the seemingly untouchable Second Amendment represents more than just the right to shoot guns. The Bill of Rights – and the Constitution as a whole – is so important because it protects our right to free speech and self-expression. We protect even the most ridiculous things people say, because we’ve decided that the government isn’t smart enough to tell us how to believe. Yes, even the idiot neo-Nazis have the right to march – and the counter protestors sure do, too.

Americans so much braver than I am have fought and died for that right, and part of the reason that the U.S. Constitution is such a perfect document is because it leaves room for improvement on our democracy. We see things we don’t like, and we speak out in the ways we choose. Even when people kneel during the national anthem or burn the flag as a political statement.

I look at professional athletes who kneel before games – or even just stay in the locker room – and I’m proud of them, regardless of how I personally feel about the issues they’re protesting. They know the potentially career-ending consequences of their actions, as has been the case with Milwaukee native Colin Kaepernick, and have decided it’s worth the risk. Talk to many ex-athletes, and they’ll tell you their sport is their only marketable skill. Many of these young players are not "set for life" if they are blacklisted from their respective leagues.

For them, it’s worth jeopardizing that huge paycheck. These are young men, mostly in their early 20s, and they are taking an actual stand in something they believe. How can we, as a society, not applaud this?

Patriotism isn’t about blind faith in your country. It’s about taking action and participating in making a more perfect union. Kneeling isn't just a symbol for these men and women, it’s using their place in the spotlight to raise awareness and effect change.

To me, patriots aren’t just athletes or veterans, either. As the always-wise Bob Costas said this week, patriots are teachers and doctors and social workers and community activists. I'll add to that farmers and journalists and Twitter smart-asses and anyone else who cares about the values our country protects.

That includes people who don’t like where this nation is now or where it’s heading. Just "stick to sports" and keep your head down? That’s not the American way.

Even as flawed as this country is right now, for many of us, it’s easily the best place in the world we can live. It’s probably pretty great for professional athletes, too. But that doesn’t mean they – or any of us – should turn a blind eye to those among us who aren’t getting a fair shake at making the best of their lives.

If it starts with taking a knee, then leads to conversation and ultimately to change, the people who pause to consider why they’re standing or sitting are the most patriotic of us all.

Let’s cherish, and not deride, the people exercising their First Amendment rights. Disagreement and dissent, and the freedom to do so without threat of reprisal, is the very essence of our democracy. To diminish that right and that privilege is really the greatest insult to our flag – and what it stands for. 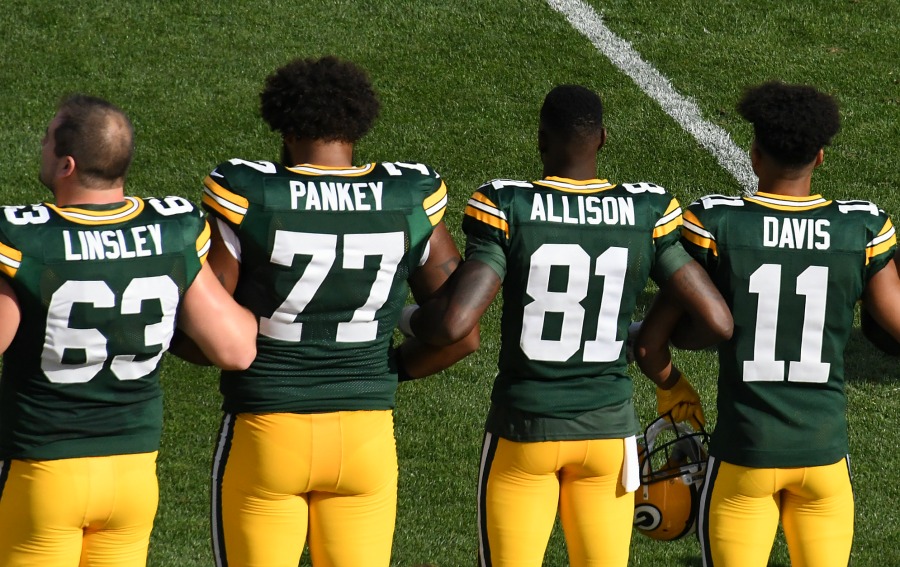 Americans who don’t stand idly by are the ones who renew my faith in Alexis de Tocqueville’s quote, "The greatness of America lies not in being more enlightened than any other nation, but rather in her ability to repair her faults."

Let’s not just stand and mumble our way through the national anthem anymore. Let’s follow our hearts and our conscience, and respect those who have a different viewpoint than we do. Let’s consider the words of Francis Scott Key’s "The Star-Spangled Banner," and decide what they mean to us.

That’s the patriotism our Founding Fathers sought to protect. We honor them by striving to improve, now and in the future.

O, say can you scream?