When Neighborhood Draft opened its doors to the public last November, the Washington Heights bar and restaurant was still somewhat of a work in progress. But, thanks to the work of Brian Felten and a host of others, the casual bar and eatery is well on its way to becoming a popular neighborhood hang-out.

When Neighborhood Draft opened its doors to the public at 5921 W. Vliet St. last November, the Washington Heights bar and restaurant was still somewhat of a work in progress. But, two months in, and you’d never be the wiser.

Thanks to the welcoming vibe and casual menu created by Brian Felten, and the work put in by staff, friends and colleagues, the casual bar and eatery is well on its way to becoming a popular neighborhood hang-out. 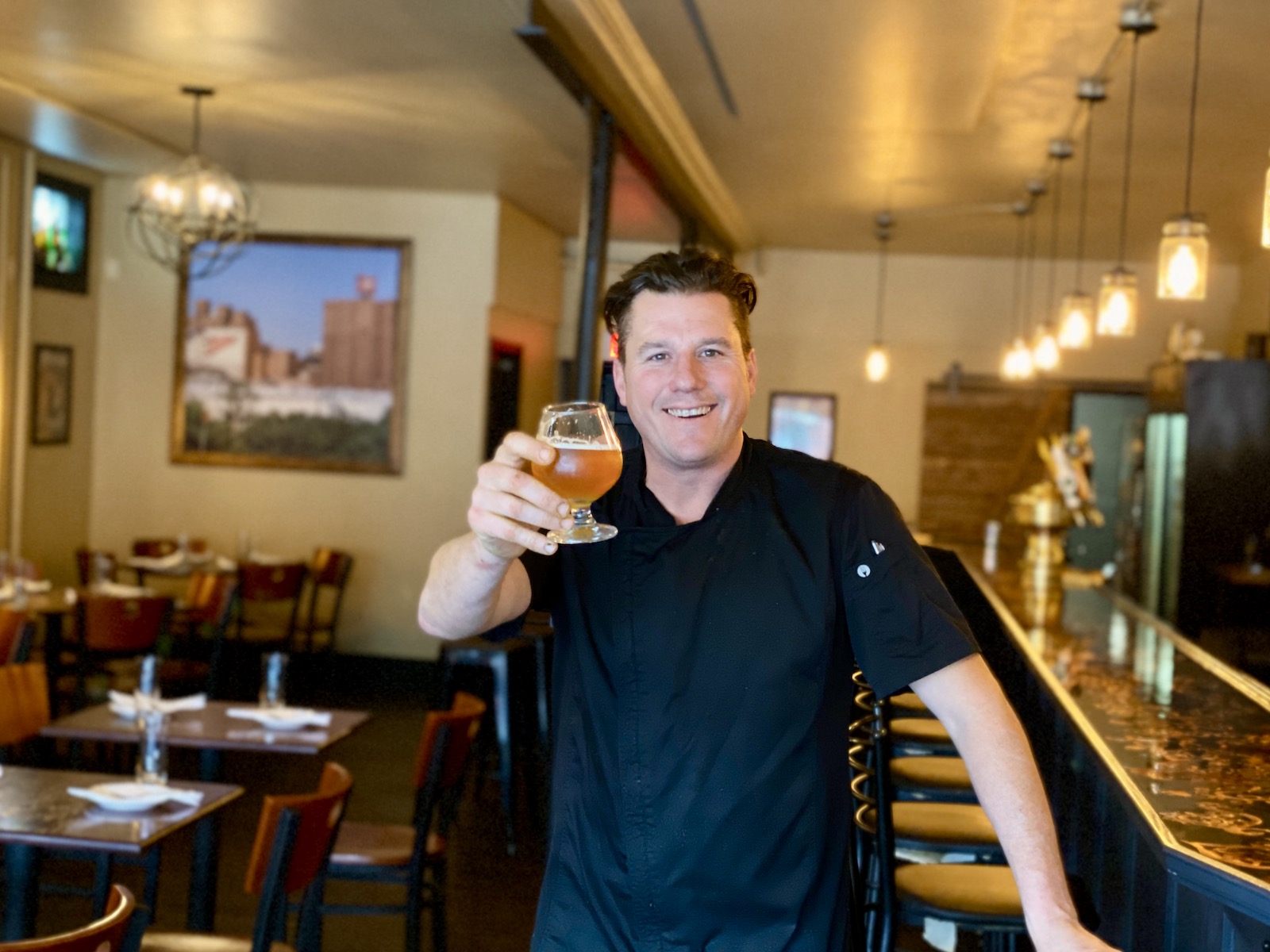 "I’m so grateful for the reception we’ve gotten from the neighborhood," says Felten. "Opening a restaurant here was the best decision of my life. I’m at the three corners of the greatest places in the city … The Heights, Highlands and Tosa. And it’s been really great to deal with the folks from all the local Milwaukee breweries, especially the small neighborhood ones like Stock House and Vennture Brew Co."

He pauses, and then adds: "I’ve been in the industry for a long time, and I also have the best service staff I’ve ever had. They just caught on really quickly and everything has been great."

Built by a village

Inside Neighborhood Draft, you’ll find a welcoming, comfortable environment with seating at low-top tables, a larger community style table and at the long, congenial bar against the western wall. Modern lighting keeps the place comfortably bright, but cozy. And a slew of details were made and contributed by a small entourage of Felten’s friends and colleagues. 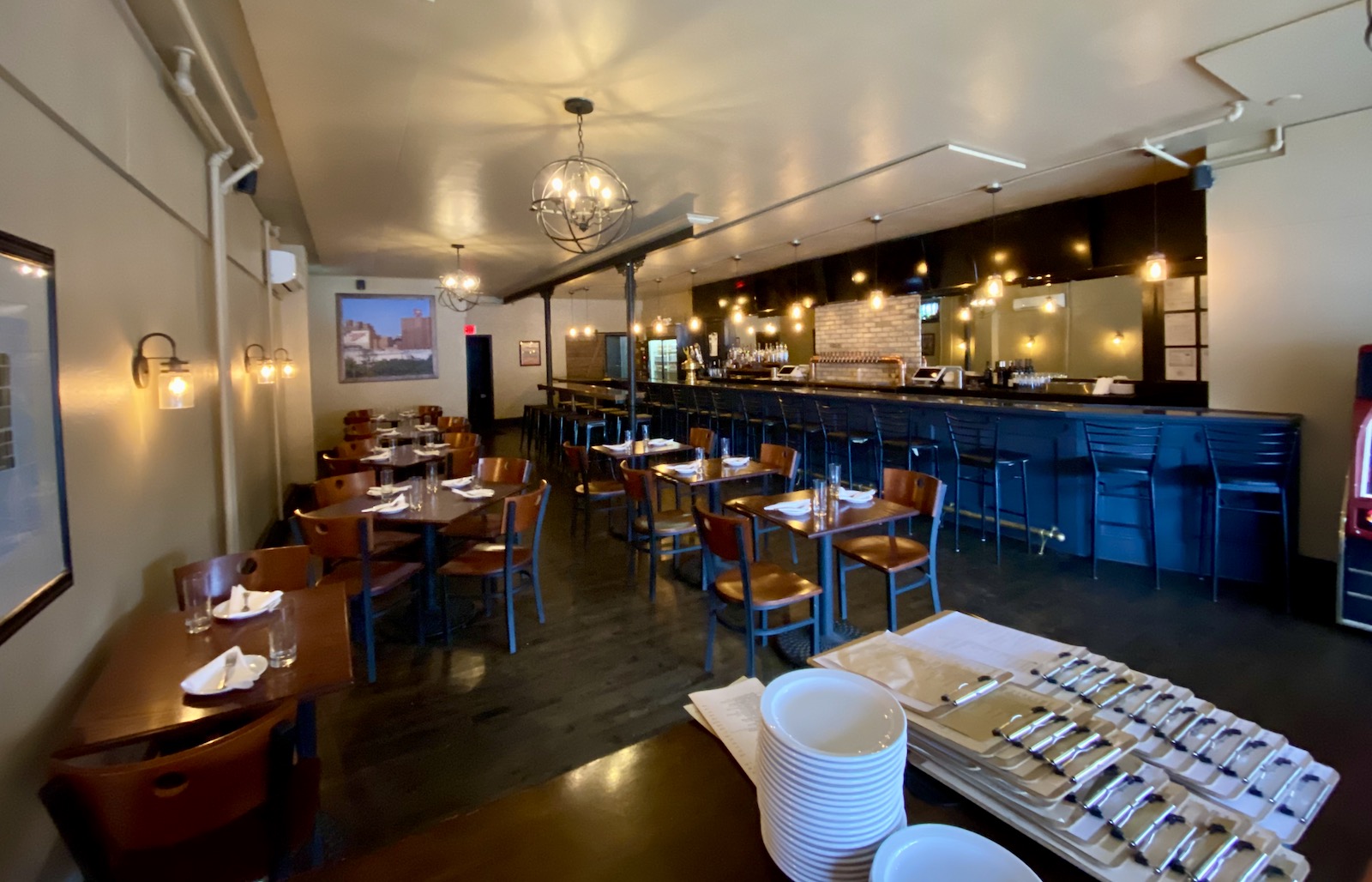 Take for instance the brand new communal bar height seating area toward the back of the restaurant which boasts a beautiful bar top in-layed with brick and repurposed boards that was made by Felten’s father-in-law Les Rhines. 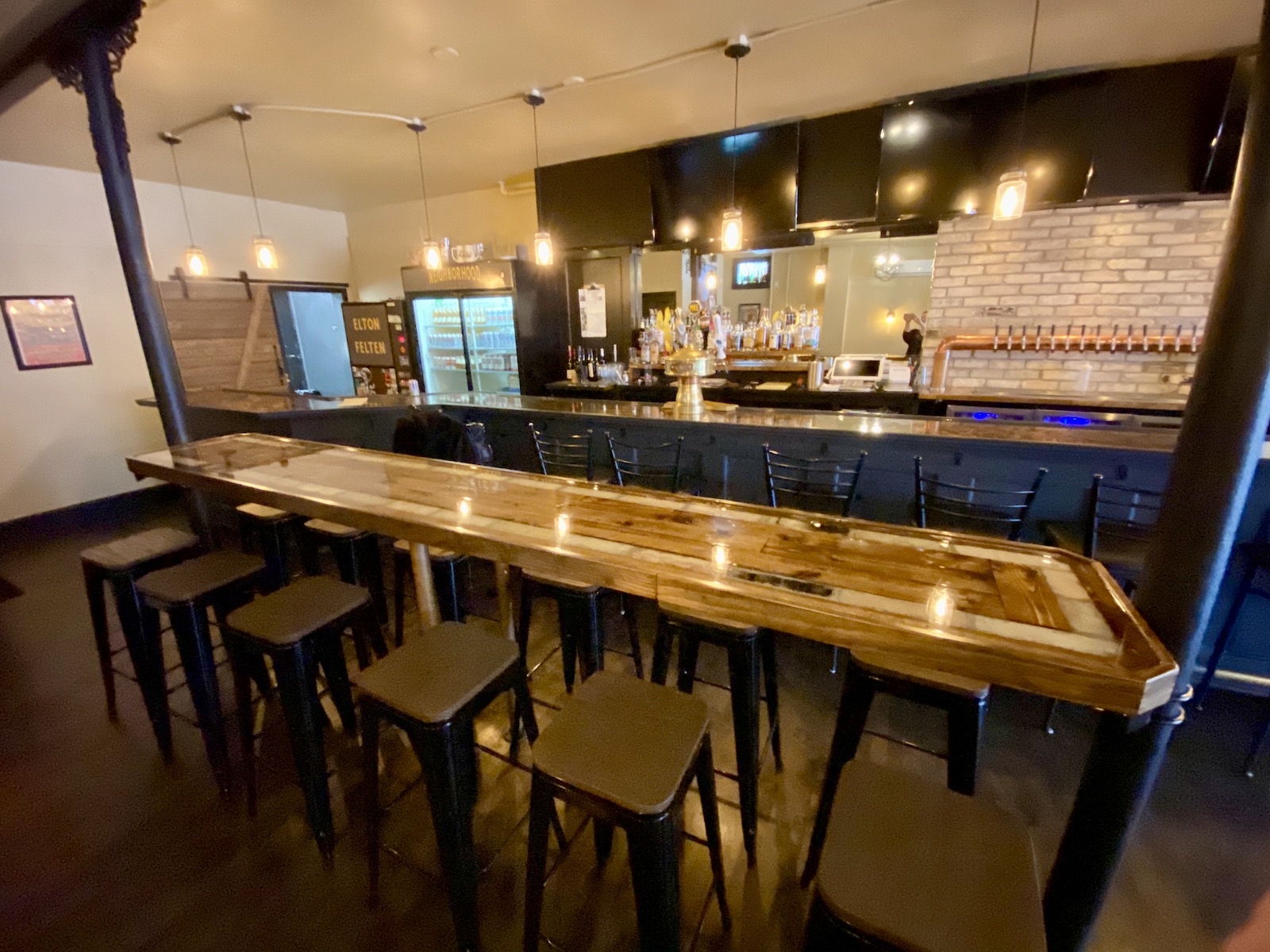 "Lee built the bar to match the Cream City Brick, the farm door and the epoxy on the bar," says Felten. "In a way, it’s the centerpiece of the place."

The new seating is also in good proximity to the increasingly sticker-clad "Elton Felten," a repurposed soda machine stocked with a grab bag of random domestic cans, along with select specialty brews. If you’re an adventurous drinker, you can insert $2 and press one of the buttons to reveal your mystery brew. 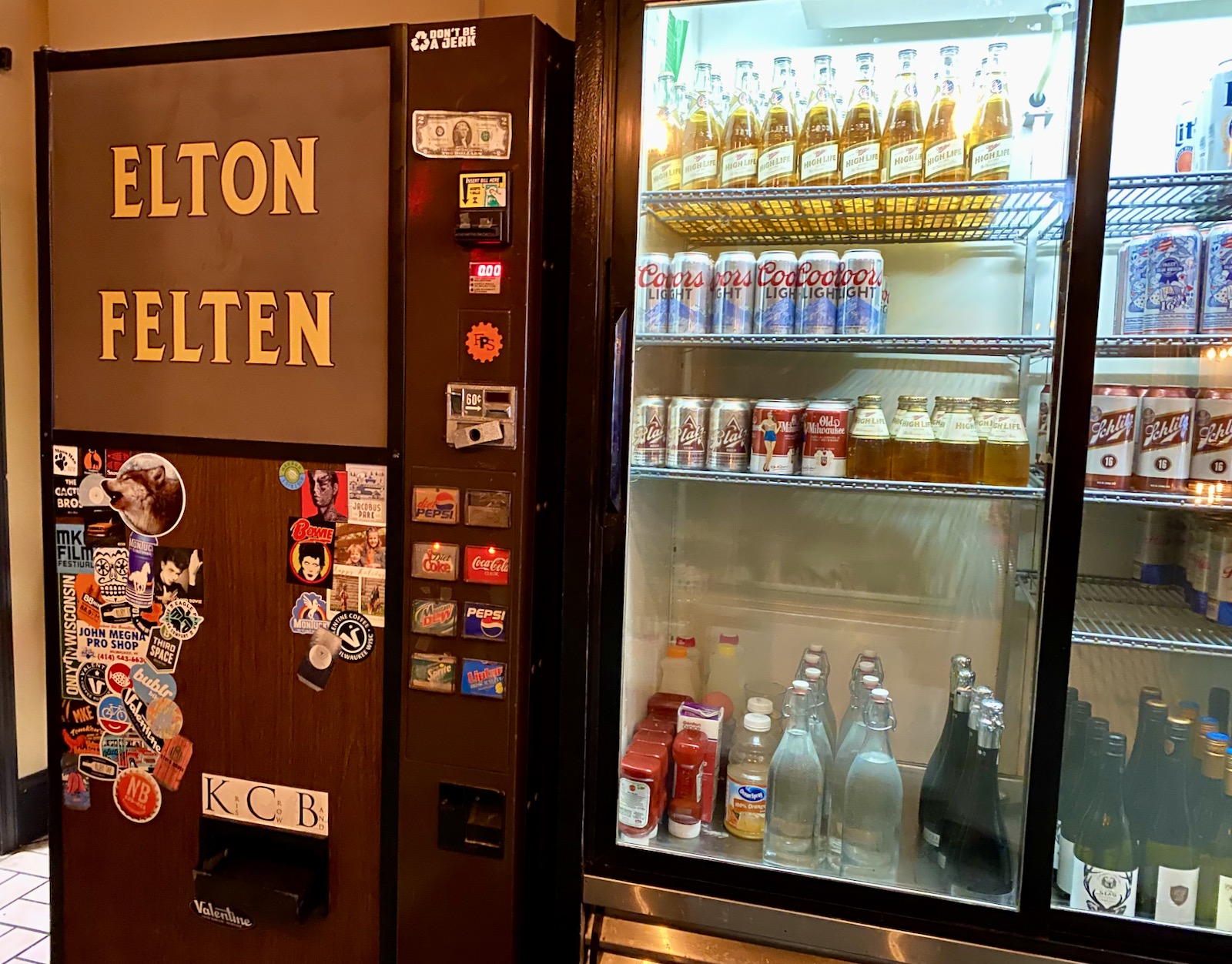 The draft tower itself, which mimics the bar with its coppery sheen, was built by Dustin Schilz of FPS Solutions and FPS employee Mike Cychosz. 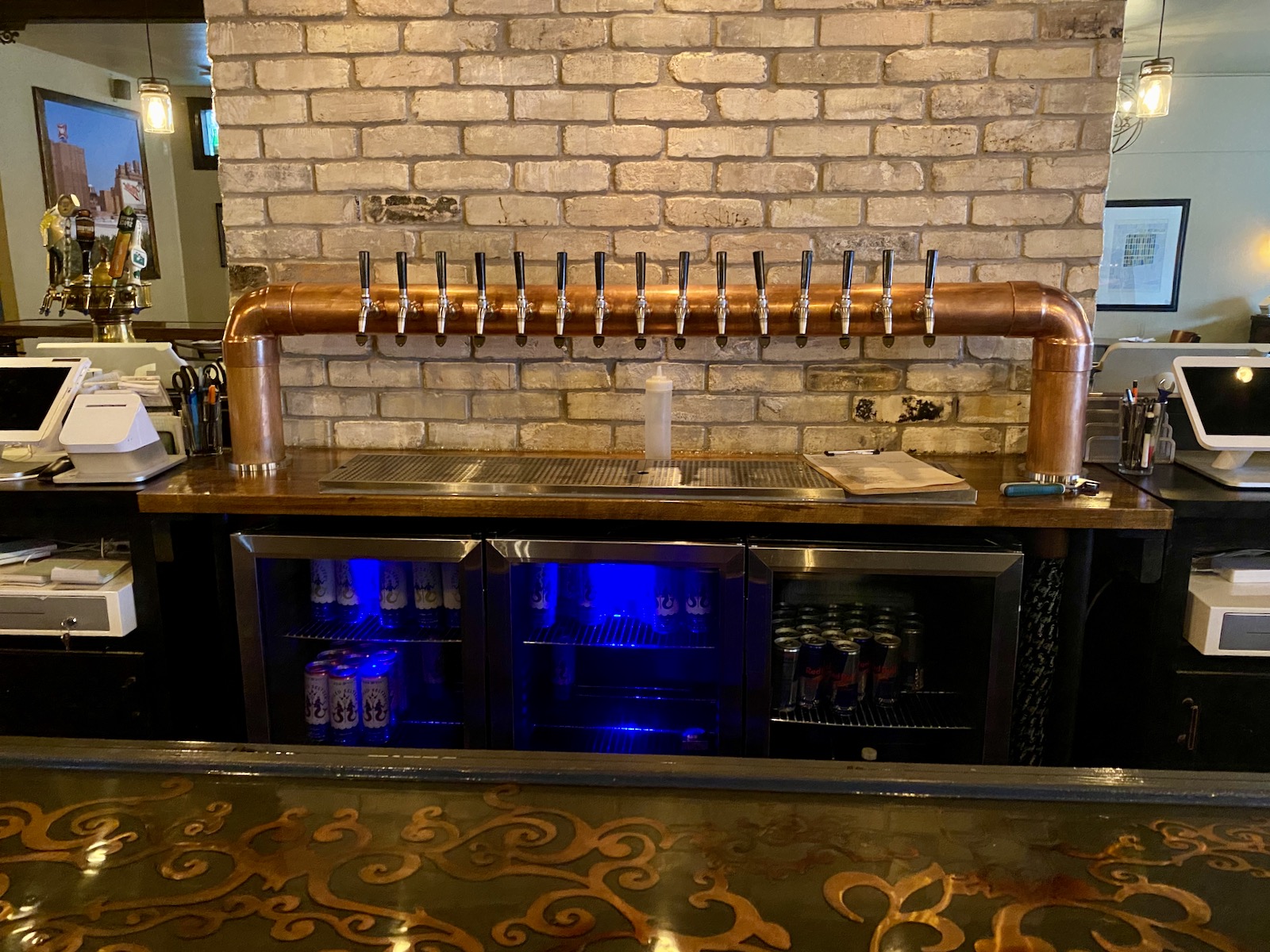 The walls are also hung with a variety of photos that pay homage to Milwaukee, including a large portrait showcasing a view of Miller Coors. The photos were printed on canvas by Billy Hoag of All City Screen and the frames are pieces of handiwork built by bar manager Michael Ernst’s father Jeff.

Be sure to keep your eye out for the oh-so-classic photo of Laverne and Shirley standing behind the beer line at Schotz Brewery. 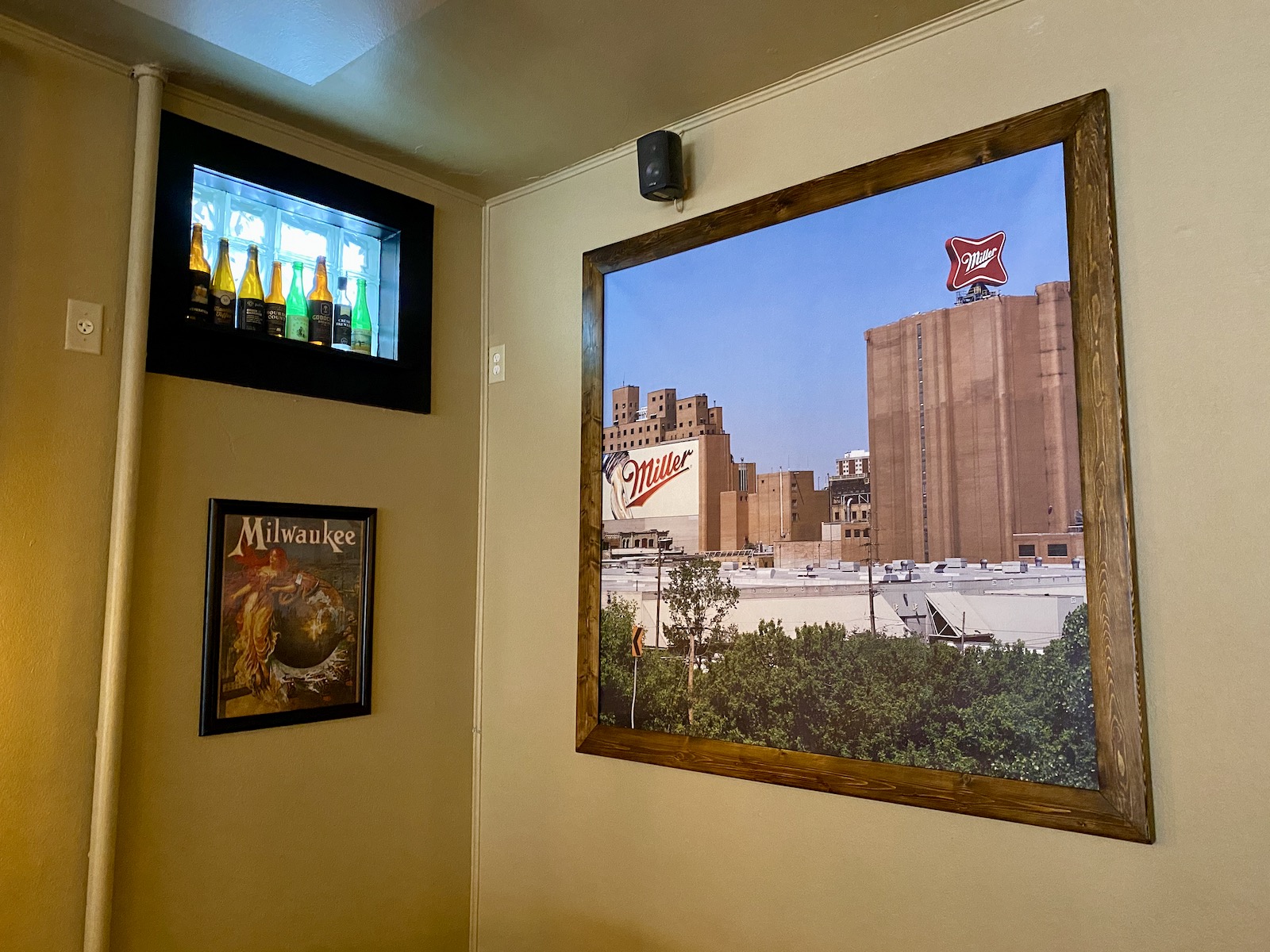 "This place took a village…" remarks Felten who says he’s indebted to so many people for assisting him in opening Neighborhood Draft. "There’s my mom, with her generous offer as investor. There’s Joe Cefalu and Matt Nissen, Adam Kimmel, Chris Rainer for rehabbing the building … and most of all my wife for putting up with long hours, taking care of our kids and being altogether supportive.

"Honestly, there are so many people I could thank … but I can’t mention them all because the story would get way too long …" He chuckles.

Of course, guests have Felten and his kitchen staff to thank for the menu of delicious dishes coming out of the Neighborhood Draft kitchen. The ever-evolving selection includes seven or eight core items plus a rotating cast of five or six additional dishes like beef carpaccio with sage truffle oil, shallots, capers and shaved parmesan (available now for $10.25); a mushroom gratin featuring cremini, oyster, shiitake and portabella mushrooms cooked with madeira, parmesan and panko ($7); and housemade chimichangas (currently made with brisket, black beans, chihuahua and cheddar cheeses, cilantro and Cholula sour cream; a vegetarian option also available), $7.

Among the staples are Felten’s wings, which are created with a proprietary three-step process that infuses flavor, while achieving a perfectly grilled exterior and tender interior meat. Wings are available five for $6.75 with a choice of seven sauces: Ginger pom, buff garlic, Greek Freak, CB2s, Charo (dry rub) and Tobacco Jack. 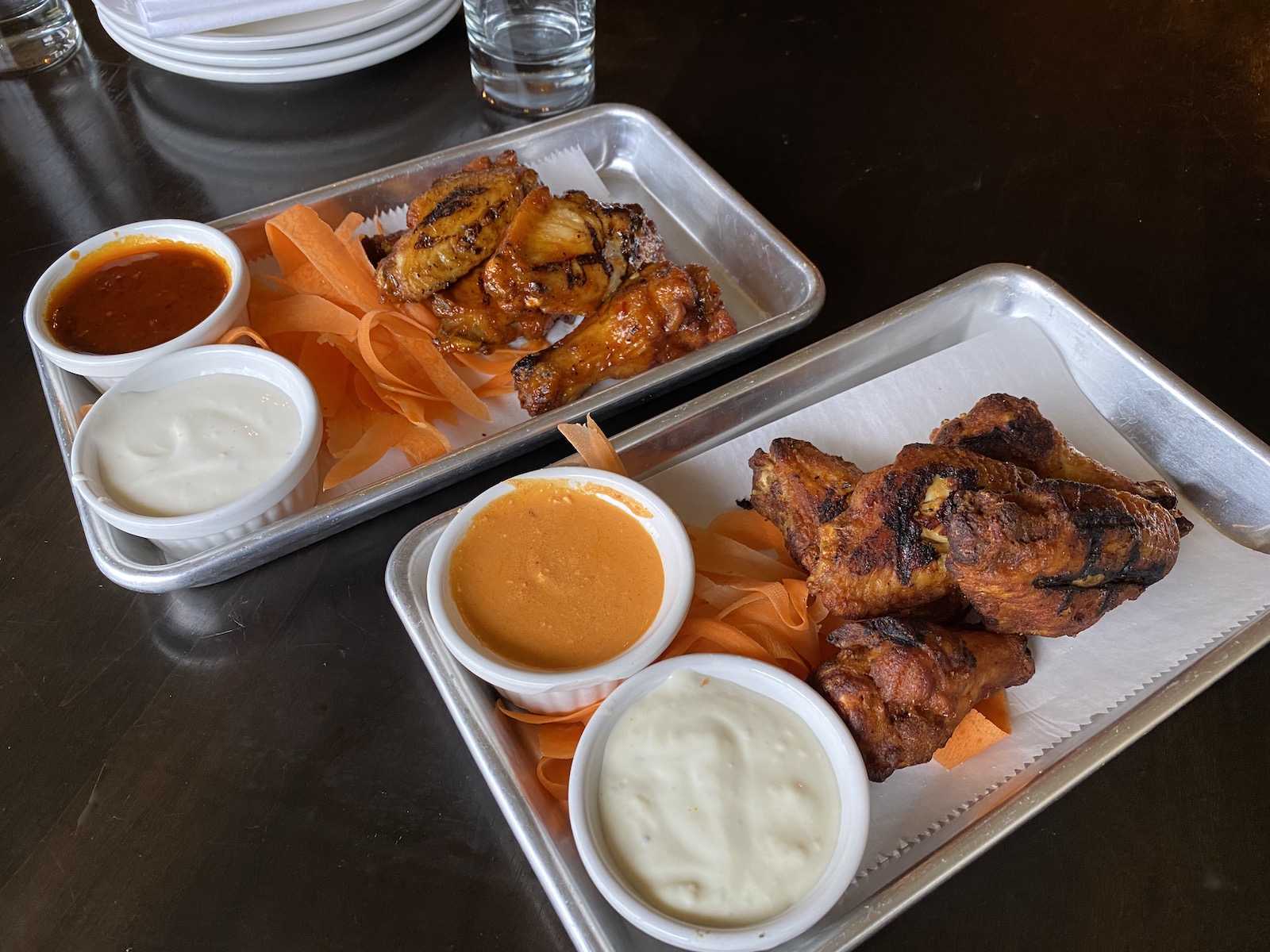 Pictured above are the CB2 wings with a sauce made from Chulula, brown sugar and bourbon; and Felten’s personal favorite, the roasted buff garlic, a variation on Buffalo sauce incorporated a healthy dose of roasted garlic.

Pair them up with an order of fresh housemade fries, made with Russet potatoes that have been shaved fairly thinly on a mandoline before being fried, giving them a crisp exterior and just enough fluffy potato on the inside (eat them quickly; they’re best eaten hot). They come plain or seasoned with parmesan and herbs, lemon pepper or curry ($5-6). 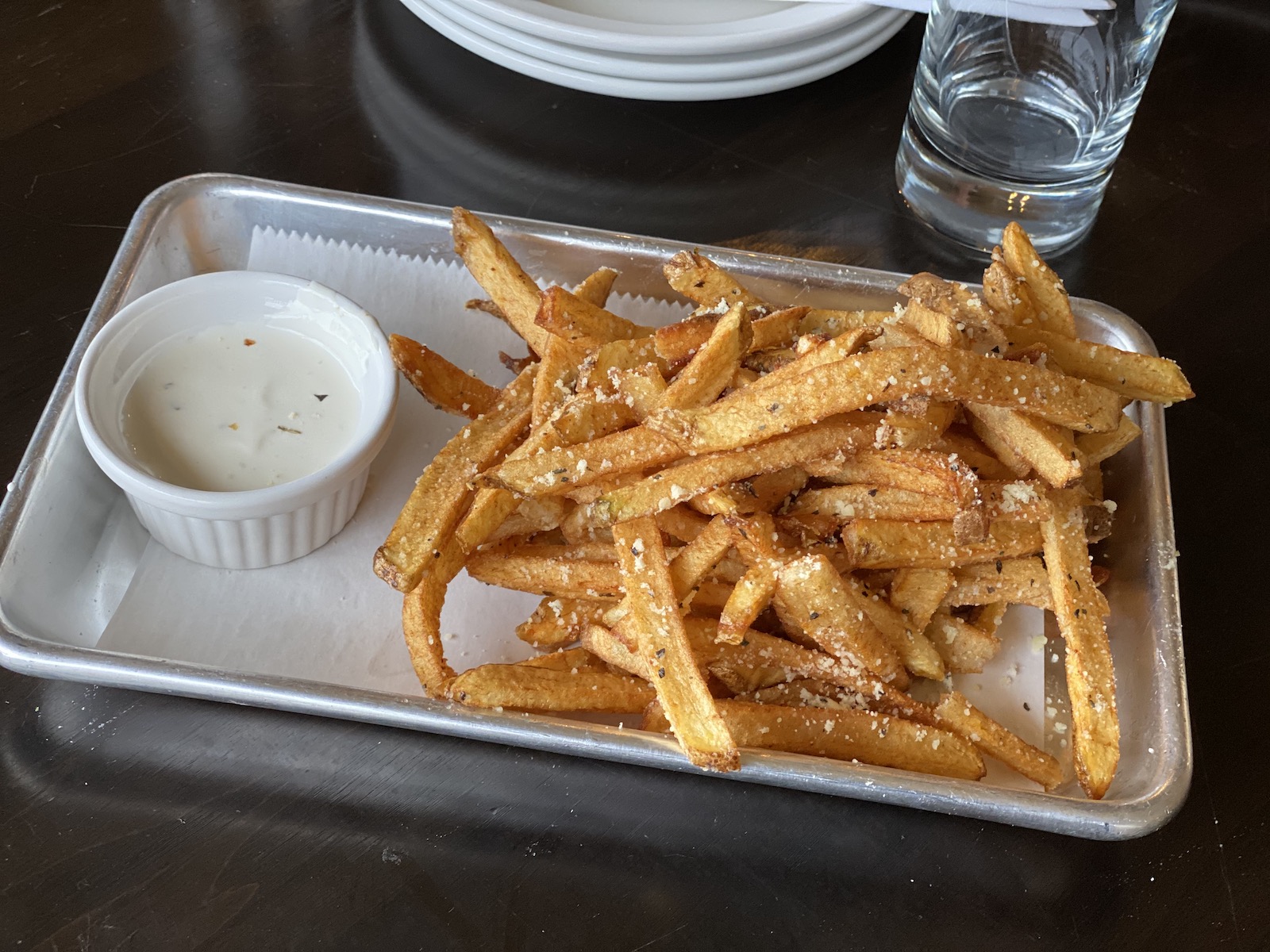 The Vlliet Street tacos are also a staple, though the fillings change out weekly. One week they might include pork belly or shortribs. Currently, they’re filled with seasoned Angus ground beef, avocado de  gallo, queso fresco and Cholula sour cream, three tacos for $7.25 (A vegetarian option is also always available). 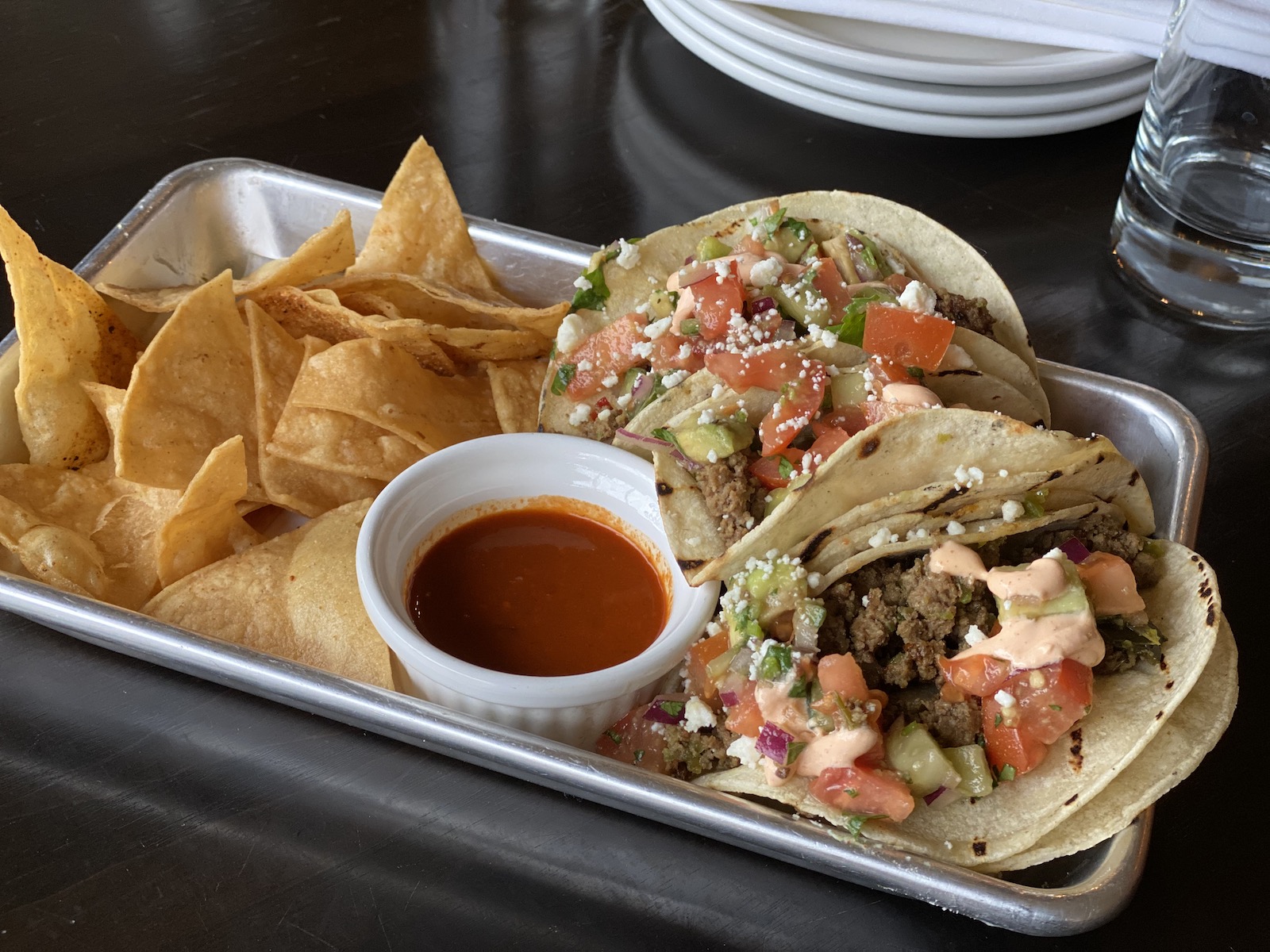 There are also beer-worthy snacks based on Milwaukee classics like the Friday Fish Fry bites featuring high life battered cod ($7); and the Sunday ham sticks: fried wonton wrappers filled with ham and cheddar and served with spicy mustard ($7). Both are available every day. 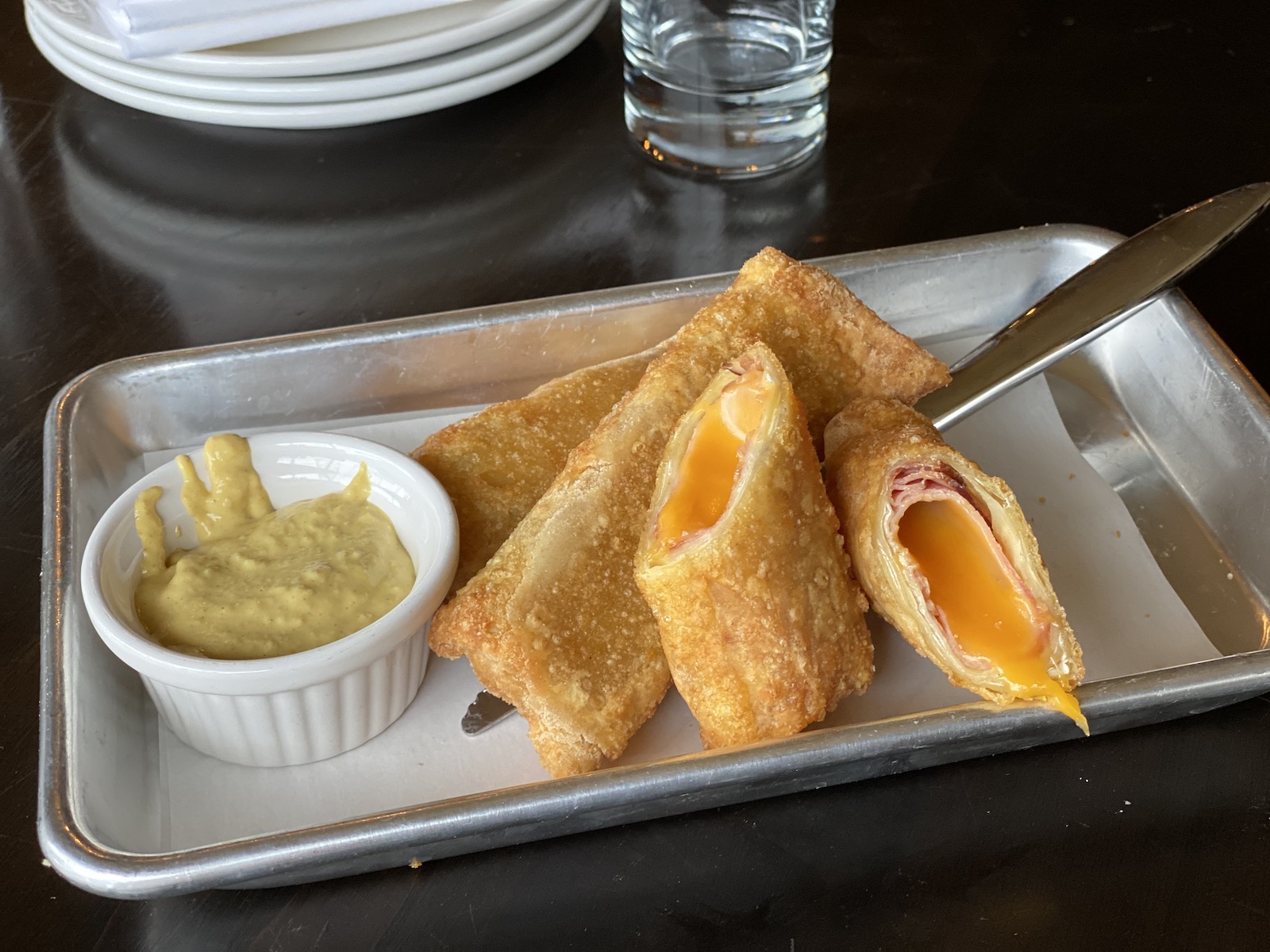 And just in case you need to warm up on a cold night, there’s also delicious housemade soup, including cheesy bacon potato ($5) and baked French onion complete with a crisp bruleed top ($5). 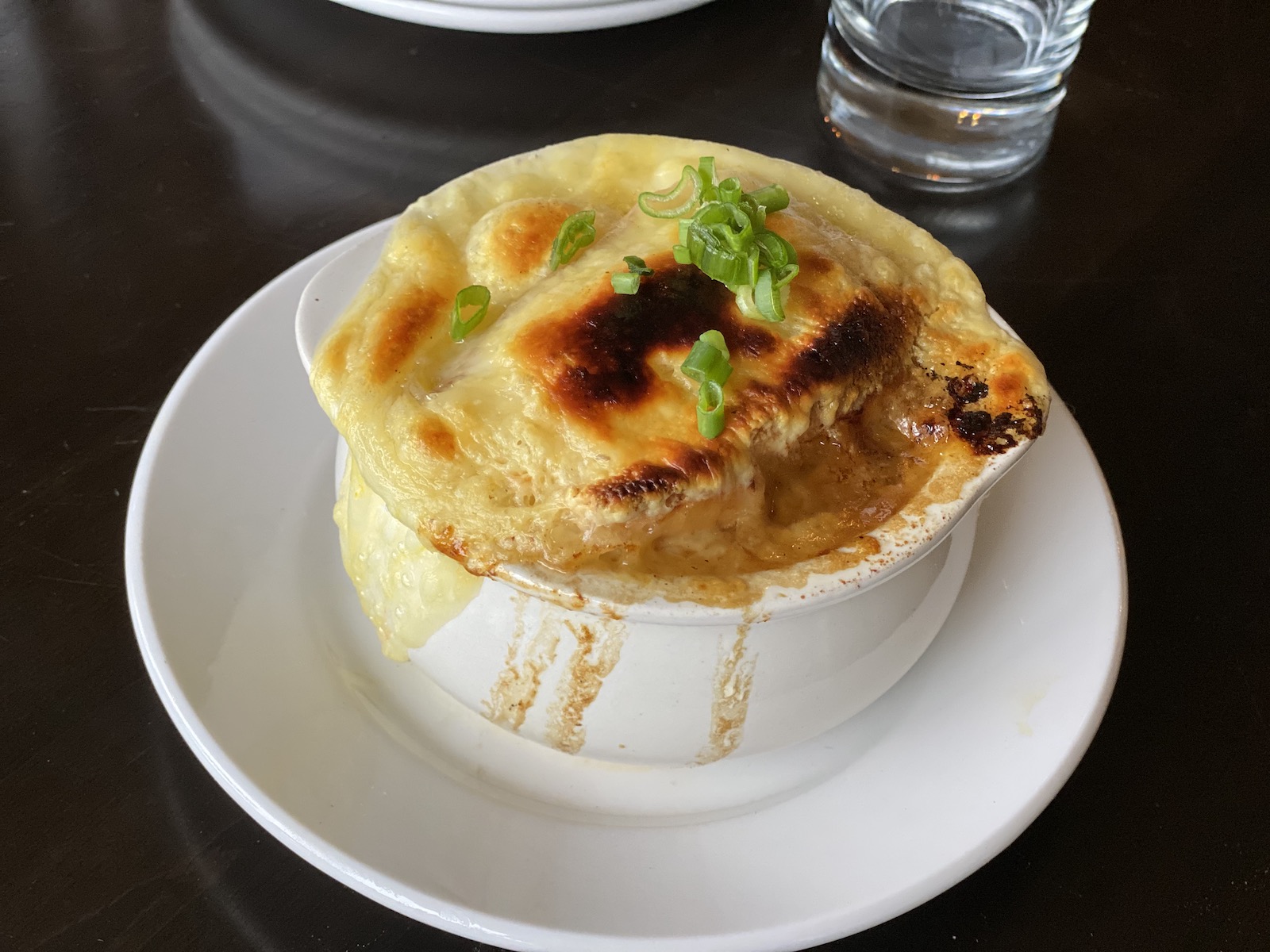 You might also want to save room for dessert. Options include a chocolate, peanut butter and pretzel waffle with Cold Spoon vanilla gelato ($6.50) and That’s Bananas, a delicious take on bananas foster featuring cream cheese stuffed French toast topped with caramelized bananas and rum sauce and served alongside vanilla gelato ($7).

Looking for something other than a beer to enjoy with your food? Neighborhood Draft also offers a short list of wine. And don’t miss the house old fashioned made with ginger and orange zest infused brandy ($7) and the So Fresh Bloody Mary (featuring a housemade tomato and veggie puree) on Saturdays and Sundays ($8)