For more than two hours Wednesday night, Neil deGrasse Tyson systematically went through 11 scientific categories and gave examples of movies - and the occasional beer commercial - that did those concepts well, and ones that did them disastrously wrong.

Though the majority of his two-hour talk was about the science – both good and bad – in popular movies, Neil deGrasse Tyson opened his Wednesday night show at the Riverside with a bit unique to Milwaukee. First, as many a Wisconsinite has done, he questioned our food science by asking what kind of cheese makes up the infamous Cheesehead. Is it cheddar? Then why the holes, since only swiss cheese has those? But it's too orange to be swiss.

For the next two hours, he systematically went through 11 scientific categories and gave examples of movies – and the occasional beer commercial – that did those concepts well and ones that did them disastrously wrong. "It's as if we go to the movies together, and I'm whispering in your ear. All the things they get wrong. But also what they get right." I've been with my physics professor husband for almost twenty years, so this was like every trip to the movies for me, though with more laugh out loud moments. 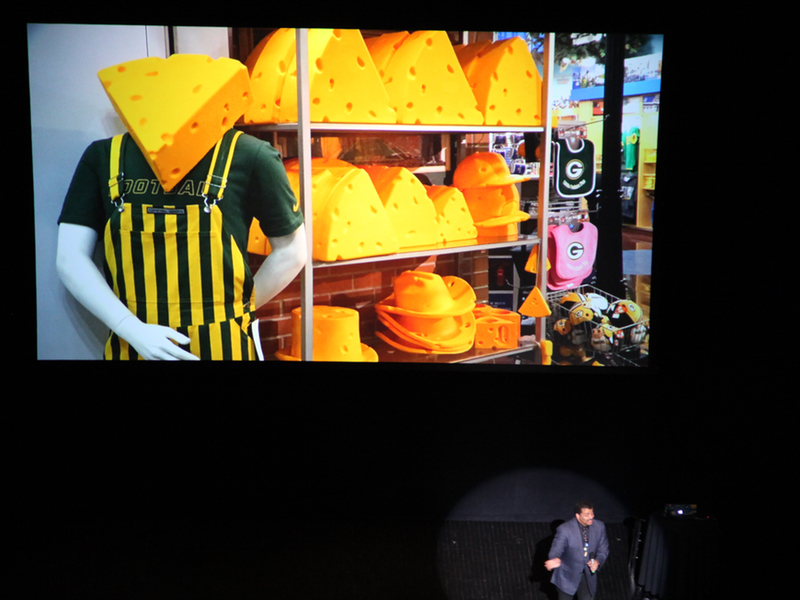 While this show did take place in a performance venue, centered around popular culture, Tyson enhanced his talk with PowerPoint slides, including video clips, lest we forget he is, first and foremost, a physics professor. But for every equation or scientific definition he put on the screen, he delivered five laughs. He's a funny man with the right amount of self-deprecation and awareness of his own nerdiness, mixed with excellent comedic timing. He manages to entertain in a way such that I found myself interested in concepts like thermodynamics and surface tension. That's more than I can say for any professor I ever had.

Tyson also entertained by sharing stories of how he's used science to indulge his nerdy curiosity. He's always wondered how heavy Mjölnir, Thor's hammer, is. Upon hearing Anthony Hopkins' line in the movie "Thor" about the hammer being forged from a star, Tyson used that to calculate a weight. He then tweeted that he estimates it's approximately the weight of "300 billion elephants." Of course, Twitter and the blogosphere exploded with criticism, as happens frequently to him these days.

As he did in an interview with OnMilwaukee earlier this week, Tyson expressed frustration with reactions to his tweets, which he views as a way to help the general public become more scientifically literate. A handful of barely-critical tweets about "Star Wars: The Force Awakens" caused headlines saying he'd "ruined" the movie. Tonight, he asked an eight-year-old in the audience if he had ruined the movie for her and, of course, she said no.

His best moments of the night, however, were more serious in nature, coming at the very end during a short question and answer segment. An astrophysics student asked if he had any advice, and he told her to take the hardest classes she can even if she might not get as high a grade. "If everything you've learned is what everyone already knows, no one will beat a path to your door." He advised her not to fear hard things and to keep working at it, and eventually she would rise to the top.

In response to another question, Tyson said he often gets asked by parents how they can help their kids get better at science. And his answer is always, "Learn science yourself!"

As for the above-mentioned beer commercials? They aren't always perfect, but Heineken had their details right about the Mars Rover, Corona Light knew the finer points of sunset and moonrise in the tropics, and Guinness nailed it on evolution. "We live in a world where our beer commercials are more scientifically literate than certain people who run for president."

If that's ever going to change, we need more people like Neil deGrasse Tyson, who can engage us and make complex science relevant – all while making us laugh.

Liz Lincoln Steiner Editorial Assistant @LizLincolnMKE
Liz has been in Milwaukee for almost a decade, after growing up in Madison. It's possible she might like her adopted hometown better, but she would never admit that to her mom. When she's not slaving away at OnMilwaukee, she's probably watching a football game, cross stitching something profane, writing one of the romance novels she publishes under the highly secret nome de plume, Eliza Madison, or some combination thereof. Whatever she's doing, she's drinking Diet Coke.