If you live in Wisconsin, it's likely you've indulged in a Wisconsin style old fashioned, complete with muddled fruit, Korbel brandy and a splash of soda. But, have you ever had a brandy old fashioned served up in a crockpot?

If you live in Wisconsin, it’s likely you’ve indulged in a Wisconsin style old fashioned, complete with muddled fruit, Korbel brandy and a splash of soda.

But, have you ever had a brandy old fashioned served up in a crockpot?

You can do just that at Don’s Diner & Cocktails, 1100 S. 1st St., where crockpots are becoming a vessel nearly as popular as traditional rocks glasses.

Ryan DeRosa, beverage director for Stand Eat Drink says the crockpot idea was meant to capture the quirky, old school vibe at both the diner and Naughty Angel, which was created to have the look and feel of your grandparents’ basement bar. But it was also a products of his own memories of making due with drinking vessels

"When you’re in a place where you just don’t have the normal things to use, you make due," he says. "And this makes me think of some of the ridiculous things we bartenders do when we get together."

The drink itself, he says is a straightforward representation of the Wisconsin style brandy old fashioned, served sweet.

"We muddle orange and cherry with bitters and demerara syrup and then finish off the cocktail in the traditional manner with Korbel brandy. 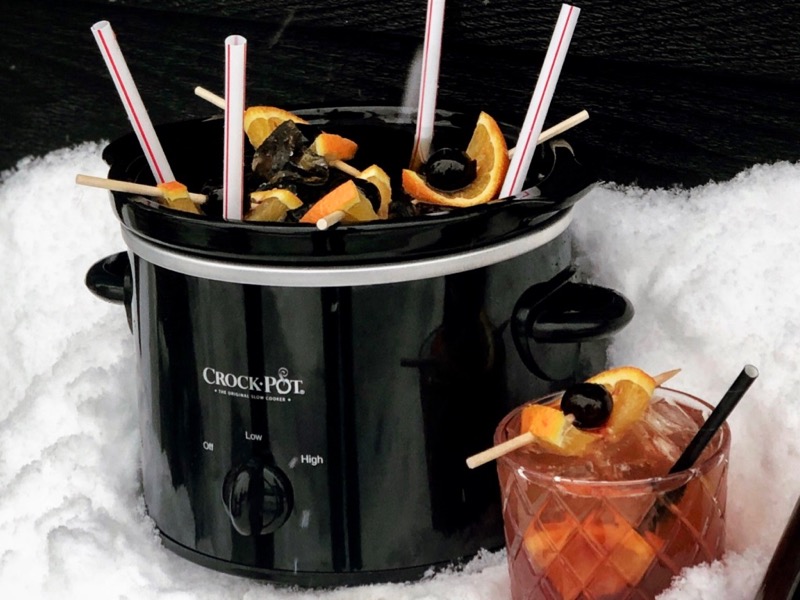 The Crockpot Old Fashioned serves two to four people and is priced at $30. However, you can score it for just $15 during Don’s Diner & Cocktails’ Old Fashioned Happy Hour, which takes place at Don’s bar and inside Naughty Angel Wednesday through Sunday from 3 to 6 p.m. Happy hour also includes $5 house old fashioneds and old fashioned milkshakes.

As far as how you approach drinking the cocktail, it’s pretty much up to you.

"You can pick it up and drink it if you want to," DeRosa says with a smile, "…but we do serve it with straws."

The Crockpot Old Fashioned is just the tip of the iceberg. As of this month, Naughty Angel has fully embraced the old fashioned culture, transforming its menu to include not only the classic Wisconsin old fashioned, but a rotating selection of delicious newfangled versions of the classic cocktail.

Among renditions DeRosa is cooking up is a tiki-inspired old fashioned featuring muddled grapefruit and cherry, a bit of lime, pineapple juice and Old Forester whiskey.

"We make a lot of old fashioneds here… more than I’ve ever made before," says DeRosa. "And it only makes sense, since it’s such an old fashioned feeling bar."
Naughty Angel is open Wednesday through Friday from 5 to midnight and Saturday and Sunday from noon to midnight.