A couple weeks ago, Plum Media turned the dirt to ceremoniously launch $1.85 million in renovation work to turn a former Milwaukee Casket Company shipping and receiving building into its new headquarters. Today, we step inside to take a look around.

A couple weeks ago, Plum Media turned the dirt to ceremoniously launch $1.85 million in renovation work to turn a former Milwaukee Casket Company shipping and receiving building into its new headquarters.

The video- and event-production company is currently located in the Third Ward, with about 20 employees spread over two floors. This new home, which also has two stories, will have its production studios on the top floor and offices on both levels. 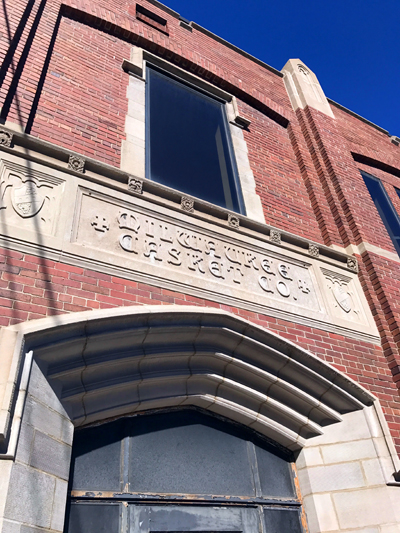 Design 2 Construct drew the project for Plum, which hopes to move into the new space at 1418 W. St. Paul Ave. by autumn.

The building was designed by architect A.C. Runzler and erected in 1929 for the casket company, which had long occupied the northeast corner of 15th and St. Paul.

The Milwaukee Casket Company was founded as the Berlin Coffin Co. in 1875 by D. B. Johnson, who ran it until his death in 1907. James Pringle took over as president in January 1919 after the passing of his brother Thomas, who had been president.

According to William George Bruce’s 1922 "History of Milwaukee City and County Vol. 2":

"The secretary and treasurer of the company is H. Nauman, who has been associated with the business for more than 30 years, while one of the employes has been with the house for 47 years, and a number of others have been in the employ of the concern from 20 to 30 years. There has never been a labor strike during the entire existence of the business. The company always insures the lives of its employes and the most harmonious relations have always existed because a good wage has always been paid. The business is now one of the large industrial interests of Milwaukee and Mr. Pringle is proving himself a splendid executive in control of the enterprise as its president."

T.J. Pringle, James’ son, later ran the place for many years until his retirement in 1971.

An 1894 insurance map (below) shows how the complex – which at that time sat adjacent to the Cream City Brick Co. kilns – looked at that time. 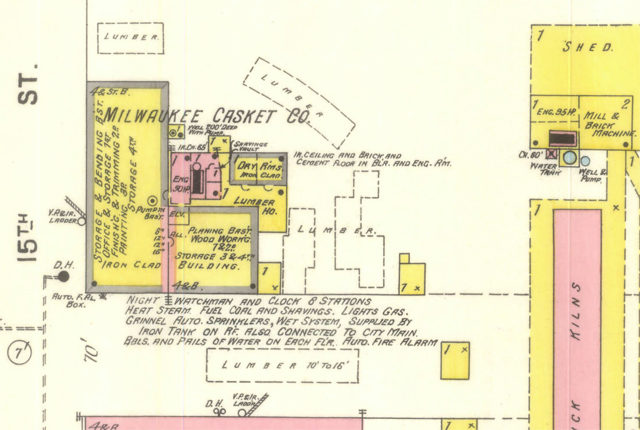 There was lumber storage where the current building is located, plus a couple other structures to the west that served as wood shops, finishing shops, offices and storage. All of those buildings are now gone.

The 1910 map (below) shows much of that 1894 complex extant, but with the addition of a 1901 cream city brick building to the north and some lumber sheds and some changes to the kiln and other areas. In more recent years, the 1901 building was home to The Scratch Pad and Trounce record shops. 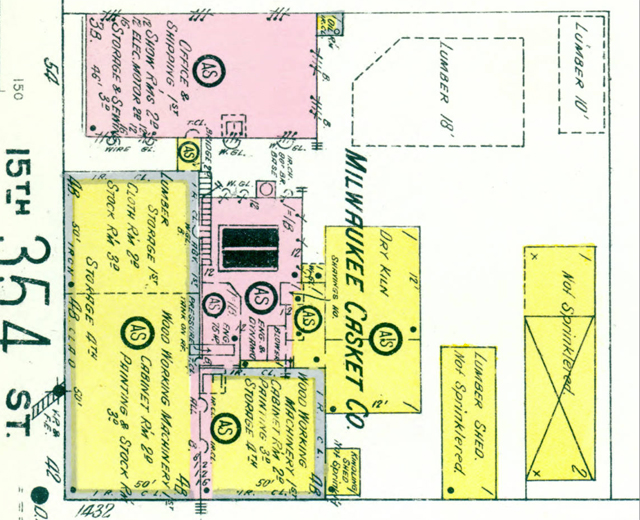 Even most of this is gone today, too. That 1901 building (pictured below) – designed by Charles Lesser – still stands and is owned by Plum, which is currently listing it for sale. 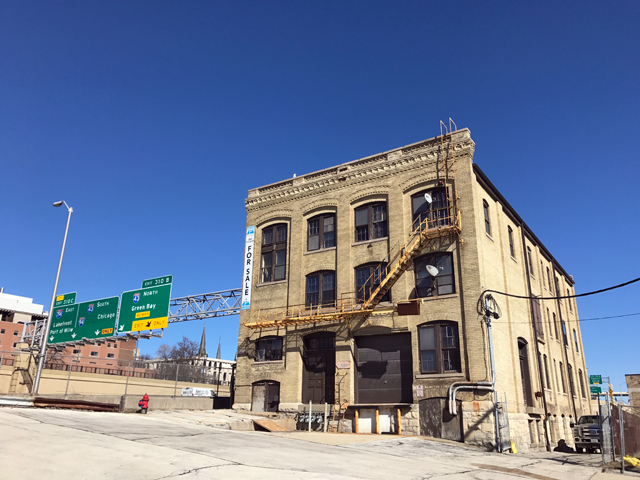 And it seems that the building marked "dry kiln" also survives (pictured below, courtesy of Plum) and will become the new entrance when Plum moves in. 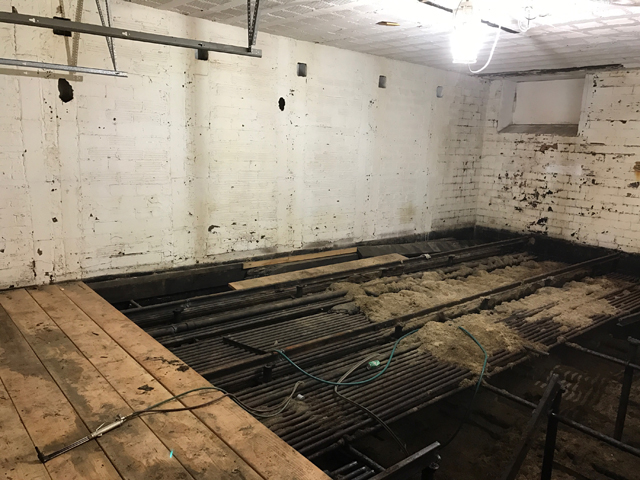 A four-story building on the corner, likely designed by Ferry & Clas, was demolished in 1986. A few small, single-story buildings on the west end of the complex (pictured below) will come down as part of the renovation, too. 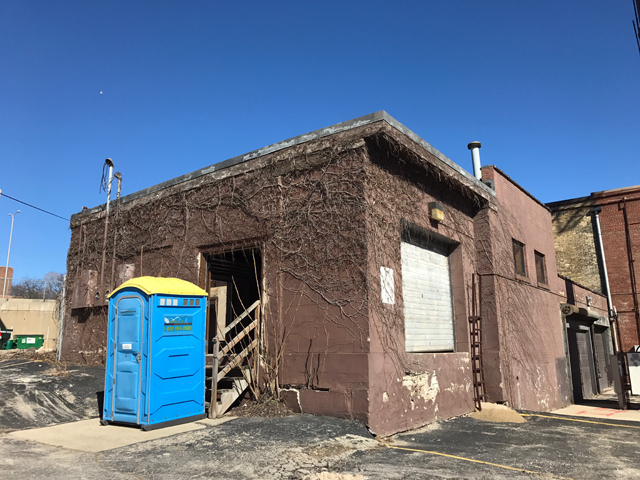 The 15,000-square foot, neo-Gothic building that is currently being renovated was most recently home to Action Heating and Cooling, which is now headquartered in the Haymarket neighborhood. Milwaukee Casket is located in Menomonee Falls.

The Wisconsin Historical Society’s Architectural Inventory describes the building as a, "two-story brick building with stone accents. Trefoil carved blocks atop brick pilasters adorn the south facade, and the recessed Tudor arch entryway has stone quoins and archivolts, flanked by lantern sconces. A secondary entrance is located on the west elevation. A stone water table wraps around the southwest corner." 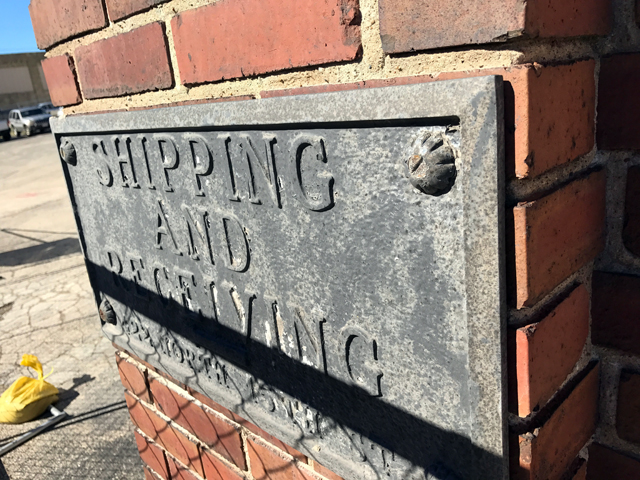 The most noticeable feature outside is the carved stone "Milwaukee Casket Co." sign embedded above what was the main entrance. To the left of the door is a plaque marked "Shipping and Receiving" and bearing the address "422 N. 15th St."

Though there’s not a ton of striking vintage detail inside, there is some, and, thankfully, the folks at Plum are keeping as much of it as possible, according to video editor Eric Conley, who showed me around. 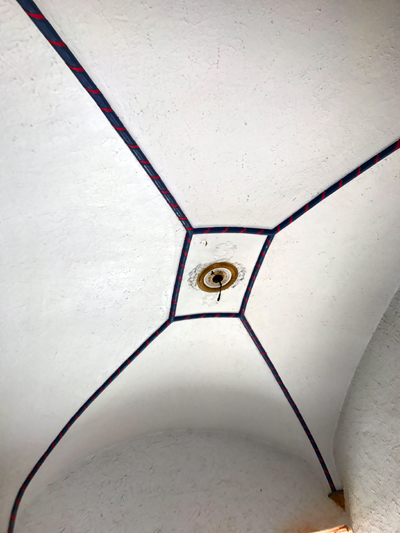 We walked into that old entrance where there’s a pointed Gothic portal with sidelights and a transom window. There’s a terrazzo floor and above, a vaulted ceiling with decorative tracery and plasterwork.

"The intent is to maintain some of the original character of the place," Conley confirms.

"They want to keep the ceilings in here," he says of the small lobby. "The texture on the walls, that I'm not sure about, but the ceilings."

In the main space down here he adds, "they're re-doing this terrazzo because there were walls that went up that left holes. So they're filling it all in."

That area also has terrazzo sills on the front windows. 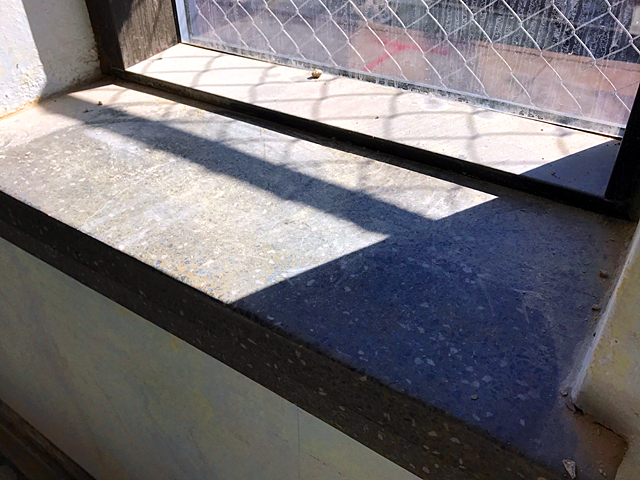 Toward the back of the area there’s a walk-in vault that will remain. There will be bathrooms and a kitchen added down here, with some offices right up near the St. Paul side and also toward the back. 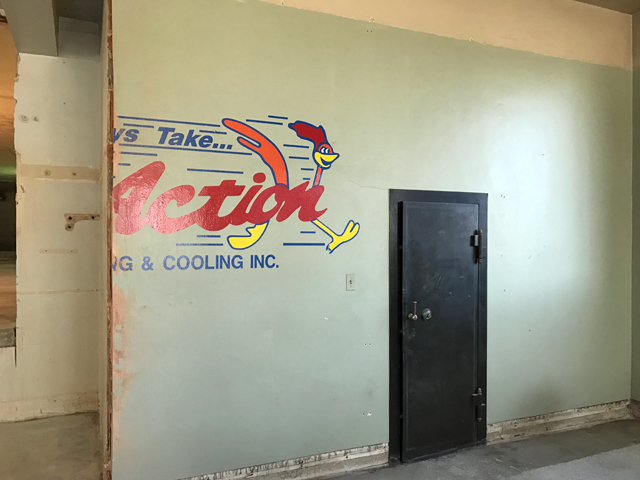 Sounds like the radio and tape player embedded into the wall will not survive the renovations. 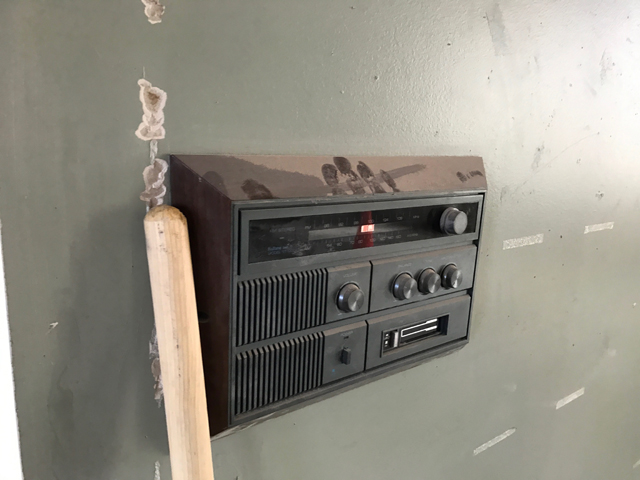 A conference area – or "war room" – is also being created. Conley describes it as, "a common area for all the employees to get together for bigger meetings."

Off to the left is the former kiln area, which had a series of pipes running a few feet above the floor with open areas below, where the wood for the caskets was dried. Those pipes have been removed and one of the two rooms will be the entrance and lobby.

Back toward the front there’s a terrazzo staircase with a nice iron railing capped with a wood banister. 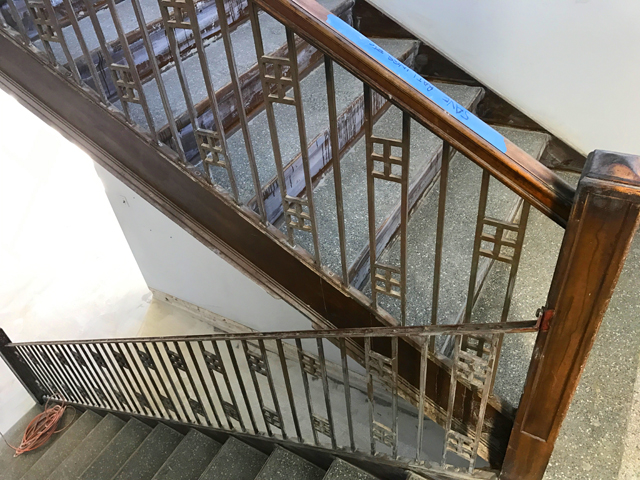 Upstairs, where there will be offices at the front and a big production studio at the back, has the coolest feature: a sort of mod Gothic arched ceiling that will remain. Offices here will have shorter walls to allow preservation of this great detail. 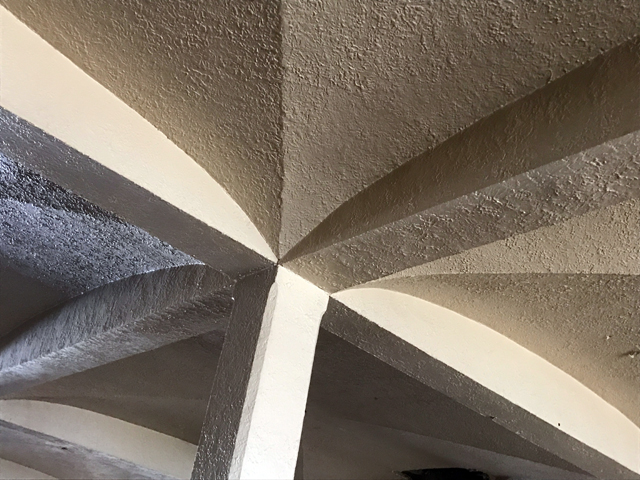 The building looks like it offers copious space for 20 employees. It is bigger than the current digs, says Conley, who adds, "I tell you what, it disappears quickly. When you start putting in all your needs. 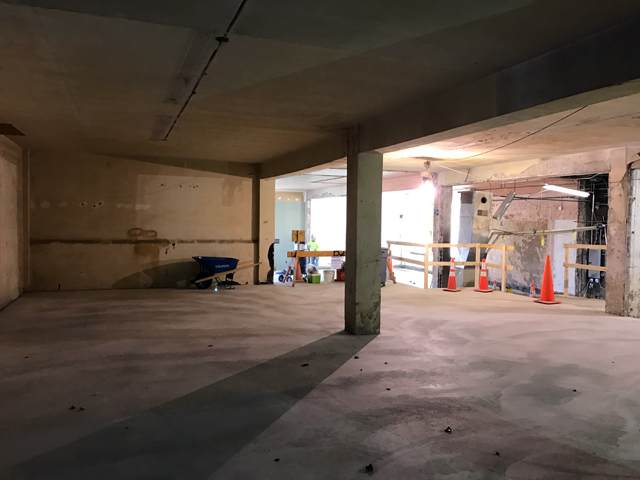 "This brings us definitely together, but also you know, now we have things like bathrooms that we didn't have to worry about before because they were out in the common area (of their current building)."

Conley says no one at Plum appears to be freaked out about the product initially made in its new home. But everyone is excited about the project.

"Oh yeah, definitely, especially because every day it keeps changing," he says. "In the beginning, there’s all the demolition, and we have videos of all the stuff going on, and then to see the changes along the way, it's kind of cool."