MPS breaks ground this week on a new Vincent Stadium

Milwaukee Public Schools will break ground on a new stadium at Vincent High School on the city's northwest side on Thursday, May 10.

Milwaukee Public Schools will break ground Thursday on a new stadium at Vincent High School on the city's northwest side.

In 2015, the district rebuilt South Stadium at 9th and Windlake on the South Side and renovated Custer Stadium, adjacent to Barack Obama School of Career and Technical Education, on Sherman Boulevard.

The district stopped holding varsity soccer and football games at Vincent in 2016 due to the poor field conditions and spectator seating, as well as a lack of restrooms and a press box.

The new stadium – designed by Graef, and expected to be ready for use by next spring – will include an eight-lane track that meets the requirements for hosting Wisconsin Interscholastic Athletic Association (WIAA) events, as well as synthetic turf on a regular field for football and soccer matches. 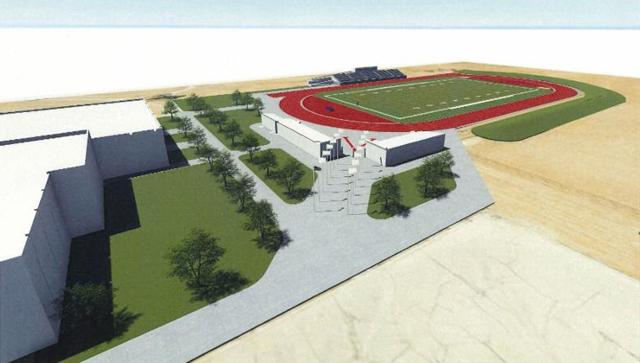 Other amenities include outdoor lighting, home and away team rooms, shotput and discus throw stations, new ADA accessible bleachers for up to 1,200 spectators, a locker room for officials, a press box, restrooms, a concession stand and a new scoreboard.

Out front there will be a new entry plaza with a new box office.

The total cost of the new stadium – a contract for which has been awarded to Nicholas & Associates, Inc. – is estimated at $5,656,791, including design, construction and inspection. It will be paid for via the district’s construction fund, as well as from district borrowed funds and qualified school construction bonds.

The district is also seeking to sell naming rights and sponsorships for the new venue.

In the coming year, MPS says it will invest more than $11 million to improve its athletic and recreation facilities. It says a new stadium at Vincent will allow the district to schedule sporting events across the city.

The district expects that a new stadium will create more opportunities for MPS to host WIAA tournament soccer, football and track competitions, as well as its own conference relays and conference outdoor track meets.

MPS will allow some students to attend virtually next year