There are nearly 70 new foods in which you can indulge at this year's State Fair. But, which ones are worth trying? I've ranked 12 reader-selected foods from worst to best (12 being the worst) and included my tasting notes for your reading enjoyment.

There are nearly 70 new foods in which you can indulge at the 2017 Wisconsin State Fair (get the full list here). But, which ones are worth trying?

I spent a good portion of opening day dodging raindrops and working my way through a list of reader-suggested foods, tasting every single one. I've ranked 12 of them from worst to best (12 being the worst) and included my tasting notes for your reading enjoyment.

Note: In the spirit of fairness, I chose to leave Sporkies finalists off of this list. I'll be judging the Sporkies competition on Wednesday, Aug. 9 at the Bank Mutual Amphitheater at 11 am., so stay tuned for my report on the winners. 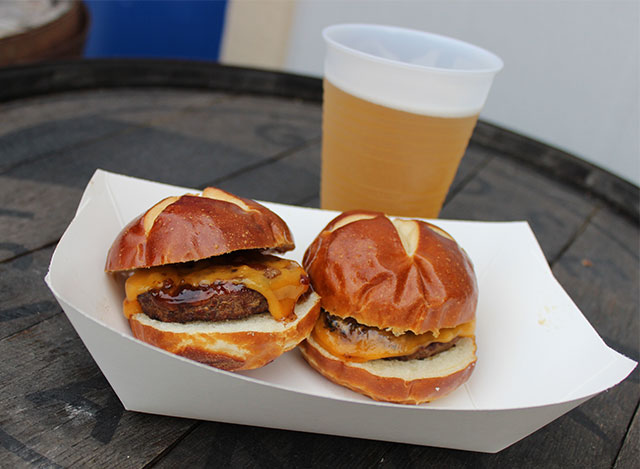 Where to find them: Budweiser Pavilion Grill, $8

Bourbon and bacon-gilded burgers? These sounded like a great idea. Unfortunately, they fell far short of any expectations I may have had. The pretzel buns (maybe the best part) were too much for these little dry hockey-puck-esque burgers that reaped only a hint of cloying sweetness (and maybe a smidge of bourbon) from the sauce, which contained sad measly pieces of limp bacon bits. Even the Wisconsin (?) cheese could not save them. If you must try them, get a beer; you'll need it to wash them down. 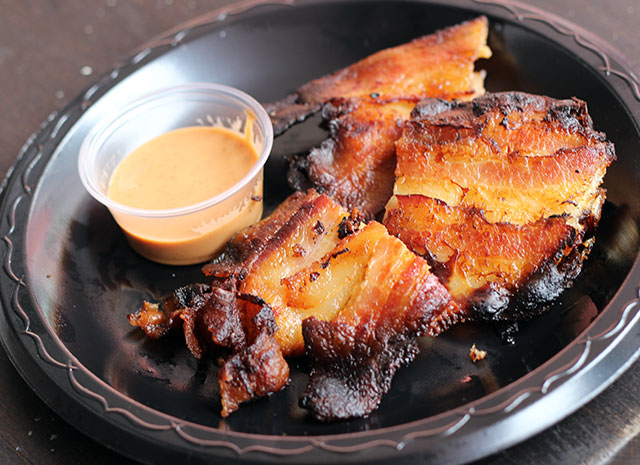 This great-idea-turned-bad wasn’t worth the price tag or the calories. The bacon, which should have been unctuous, smoky and crisp, was lackluster. The underside was burnt, and the ricotta cheese filling, while offering a creamy texture, couldn’t undo the damage caused by the bitterly charred meat. The tangy sauce, a bit like a creamy Russian dressing, was an even bigger miss. Just lipstick on the burnt pig. 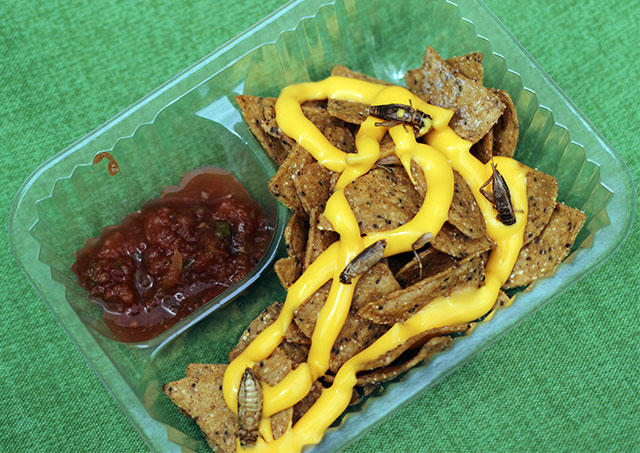 Where to find it: All Things Jerky, $8

I’ll admit I wasn’t fond of the idea of eating crickets. But, I’m open-minded. And the idea that crickets (and cricket flour) are a sustainable, protein-packed food item gave me the gumption to at least give them a try. Getting over my phobia of eating bugs -- with their crunchy bodies and errant legs -- was a feat in itself. But, in the end, they weren’t nearly as awful as I’d envisioned. In fact, both the chips and the crickets themselves (I got about five critters total on my nachos, including one particularly fat one) were nutty, with a flavor I’d liken to sunflower seeds. In fact, they come in at number 10 purely because I was pleasantly surprised. A little grossed out, but pleasantly surprised. Sadly, they were ruined by sub-par salsa and nasty nacho cheese sauce that was probably made from some of the most unsustainable vegetable oil on the planet. My advice? If you want to try crickets (which is a worthy dare for the Fair), just get the chips. 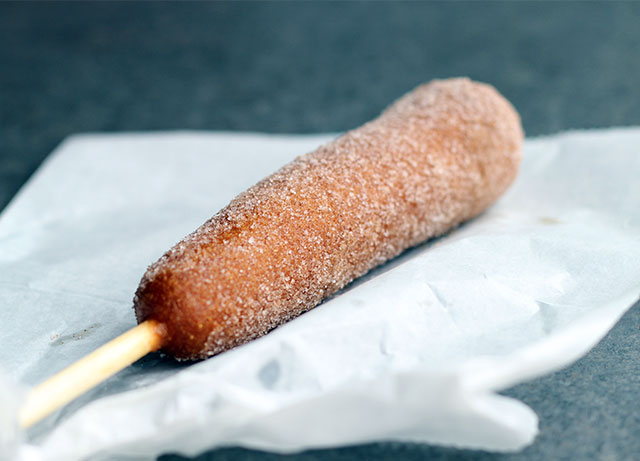 I had high hopes for this outside-the-box creation, a cinnamon and sugar coated corn dog that promised to marry both sweet and savory components. And, to its credit, the concept almost worked. If you imagine a cinnamon cornmeal doughnut wrapped around a salty, tender hot dog, you’ve pretty much got the idea. What killed it for me was the hotdog itself. It was tender and salty; but a higher quality dog with a more meaty flavor would’ve taken this creative food-on-a-stick to the next level.

8. Sangria on a stick 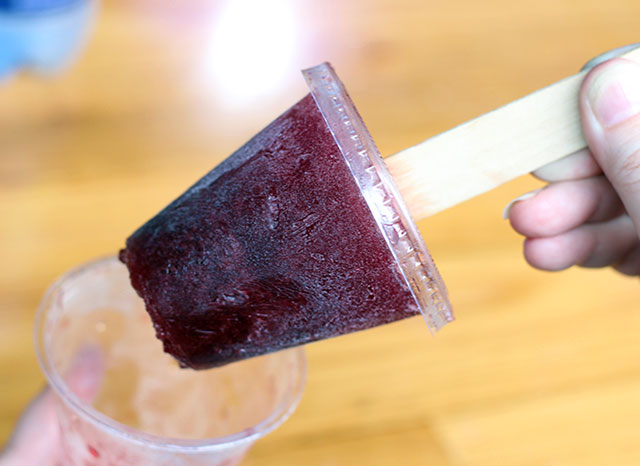 Where to find it: Leadfoots Race Bar & Grill, $7 (choice of red or white)

I was pleasantly surprised by these refreshing wine-forward pops, which were pretty spot-on in their sangria flavor. I opted for the red, which was flavorful but not cloyingly sweet. However, the pops are pretty small for the price, which is the primary reason why they’re not ranked higher on my list.
Pro tip: The container it's served in makes it a bit awkward to eat. Instead of struggling with the pop, leave it in its cup, wait for it to thaw, and make it into a mini slushee. It's just as delicious and easier to eat. 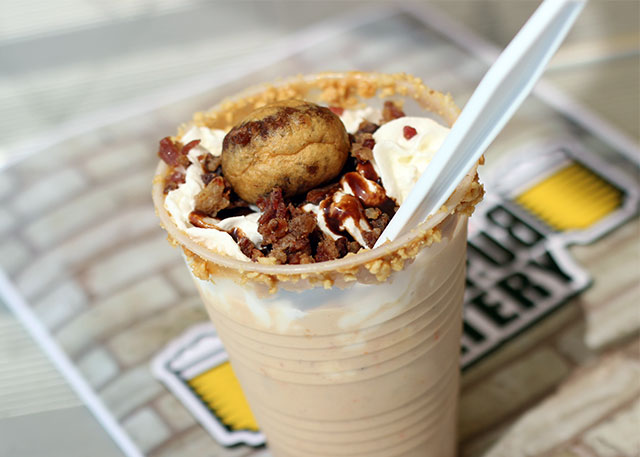 If you love bananas and peanut butter, this shake might just be your jam. It was cool and creamy with plenty of both. A precious few sips even offered up the surprise of crispy salty bacon bits and crushed peanut butter cups, which were a nice touch (though they’re also a good reason not to drink this with a straw). It was a tad on the small side for its price, but it's a cool sweet diversion on a hot Fair day. My biggest disappointment was that the "mini deep fried Elvis" on top of the shake (a mini deep-fried peanut butter cup) wasn’t actually shaped like Elvis, an element which would have made this fantastic on so many levels.

6. Deep-fried bacon-wrapped olives on a stick 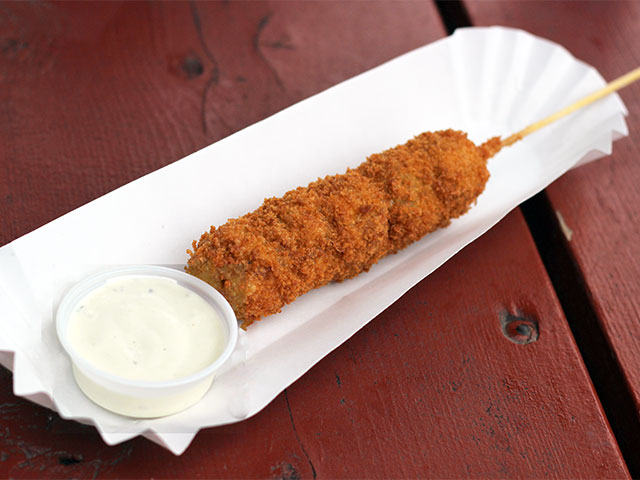 Where to find it: Fried Fruit & Fried Olives, $9

Briny, salty, smoky, creamy and crispy. All those things come together in these deep-fried bacon-wrapped cream cheese-filled olives on a stick. Last year’s version (sans bacon) made the top of my list for State Fair Foods. But, this is one of those cases where adding bacon to something that’s already delicious doesn’t necessarily make it better. In fact, I felt like the bacon just made the olives saltier; and the meaty punch didn’t really add anything spectacular. So, get the olives (they’re delicious), but skip the bacon. Pro tip: These are salty, so be sure to grab a beer to accompany. Miller Lite is a good choice, as the carbonation helps cut the fat and cleanse the saltiness from your palate. 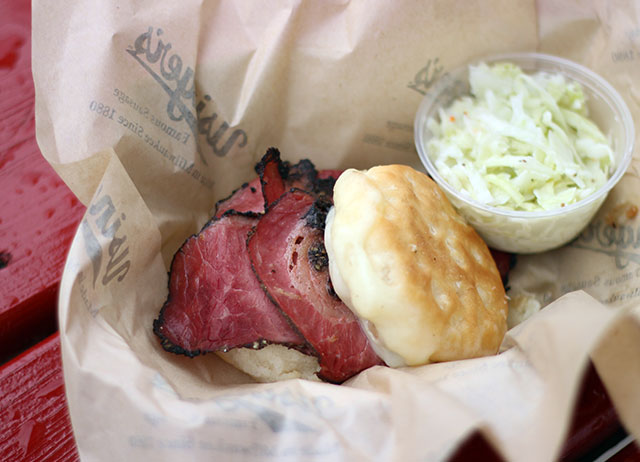 Where to find it: Usinger’s at the Wisconsin Products Pavilion, $5

I was actually compelled to try this one based on its cleverly poetic description on the Wisconsin State Fair site, which reads: "Don’t miss our brisket, don’t even risk it; to make it even better, we serve it on a biscuit!" And I’m glad I did. This tasty sandwich is not only delicious, but at $5 it’s a pretty good deal. What you’ll find is a deliciously tender biscuit that's flaky and buttery. It’s topped with a fair amount of thinly sliced pastrami and accompanied by a cup of delicious, creamy coleslaw. Pro tip: the coleslaw is great eaten on its own; but it’s also delicious tucked inside the biscuit. 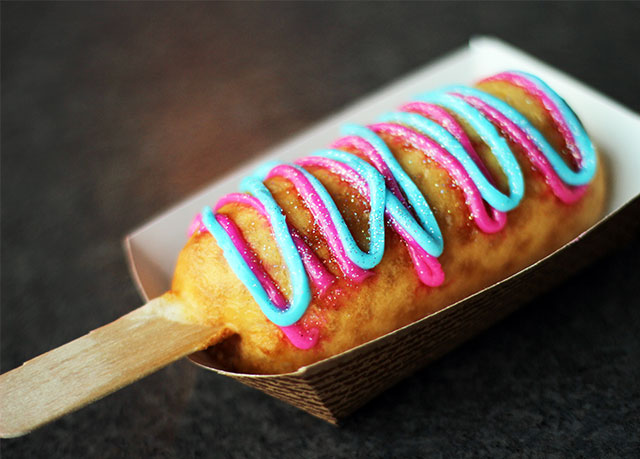 I had no idea this pastel and glitter-coated wonder would end up so high on my list of State Fair food picks. But, I have to give it its due. This warm, fragrant, deep fried-Twinkie is filled with sweet, almost iridescently pink cotton candy filling. It’s slightly fruity with a vanilla-heavy flavor not unlike the popular confetti cake. It’s an enchanting treat that wreaks of magic and rainbows: a great pick for children of all ages. 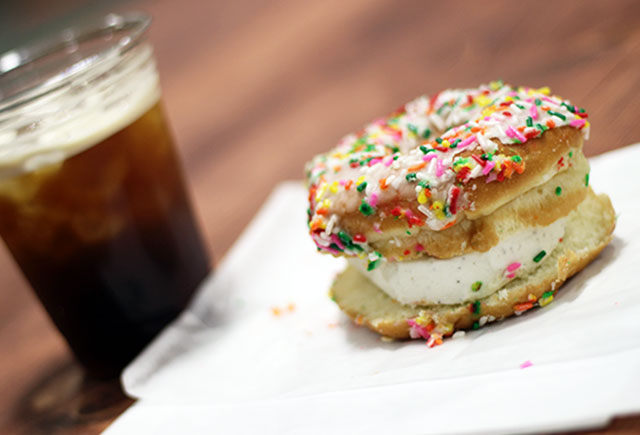 Where to find it: Grebe’s Bakery on the south end of the Expo Center, $5

What could possibly be bad about a Grebe's doughnut stuffed with Tahitian vanilla ice cream? Absolutely nothing. In fact, this treat is a perfect dessert to cap off all those other fried treats in which you’ve indulged. I opted for a vanilla frosted doughnut with colorful jimmies … because, why not? But, you can choose from among four or five types of doughnuts in the case, from glazed yeast to long johns with vanilla or chocolate frosting. Need a pick-me-up? Pair it with an Anodyne nitro cold brew for $4. 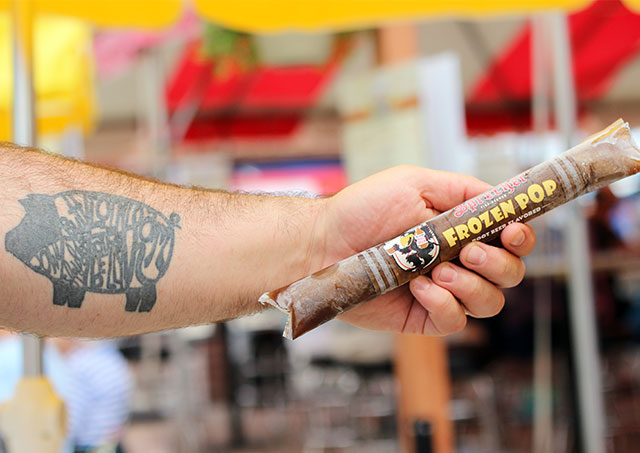 Where to find it: Sprecher Root Beer Everything, $4

Now this. This should be one of your State Fair go-to's, particularly on a hot day. Few words are needed to describe this simple treat, which comes ice cold and tastes just like a root beer float. It’s simple and delicious, and it will bring back fond memories of black cows and root beer pops of yore. 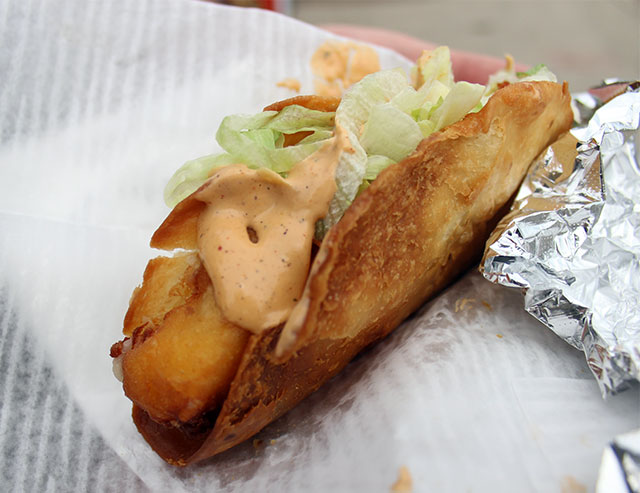 At the top of my list is an item that's delightfully deep-fried and oh-so-Wisconsin. Crispy and cheesy, this is one deep-fried food you can definitely put on your list. The flour shell was sheer crispy goodness (think chimi-changa). Meanwhile, the breaded fried cheese curds from Wisconsin's Ellsworth Creamery were on point; they would have been good, even on their own. In fact, my biggest complaint was that the brat pieces -- which were more or less overwhelmed by the cheese -- were few and far between. But, that was no deal-breaker; this cheesy fried treat was a thing of beauty even without a strong meaty presence. Be sure to add lettuce; this gut bomb needs the freshness and crisp texture to keep things balanced. And the optional sauce, which is tangy and spicy, is a delicious no-brainer you shouldn’t pass up. Pro tip: These are a bit pricey on their own, so order two. I still wish I would've tried their second cheese curd taco offering, which featured chorizo.