During today's Build the Future Community Tailgate, the Milwaukee Bucks released two new rendered images of the new Downtown arena -- this time the inside. Here's what we noticed.

During the Build the Future Community Tailgate before the Bucks-Nets game at the BMO Harris Bradley Center on Saturday, the team released two rendered images of the new Downtown arena – this time of the inside of the future facility.

The first image is a view of the court and seating bowl inside the arena. In addition to placing the majority of the crowd in the lower seating tier, the new arena bowl will feature open concourses, signature towers and a fan area – what appears to be the Panorama Club in the rendered image – located above the seating areas. 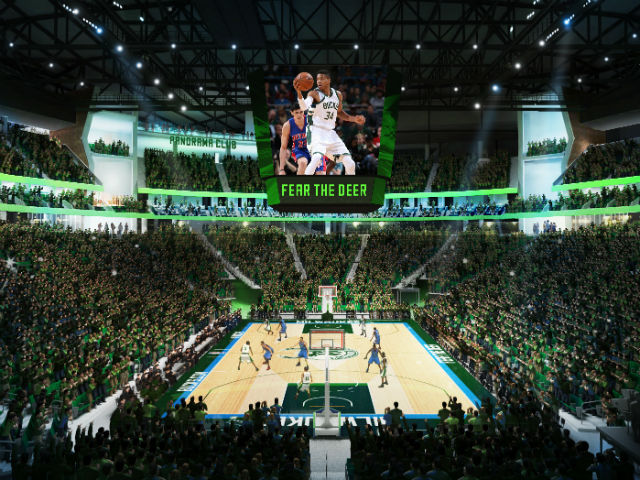 The second rendering shows inside the arena's main lobby, highlighted by a spacious atrium and a wall of glass facing east. 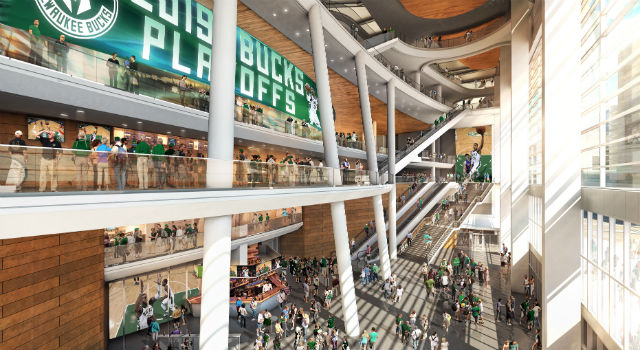 The Bucks aim to have the new arena, set to be built north of the BMO Harris Bradley Center on the Park East land, finished and ready for the start of the 2018-'19 NBA season.

It's only two renderings of a future facility for which ground hasn't even been broken, but we thought – what the heck – let's really squint at them and see if we can't see the future. Here are some things that stuck out:

The Bradley Center is notoriously spacious, with the upper seating section stretching way up and very far back, which results in terrible views and the feeling that you're a million miles away from the action. In the first rendering, there appear to be only about 15 to 20 (or so) rows in the upper level. The Bucks are touting the fact that the lower bowl will contain most of the seating, and that's wise. To fill an arena, there can't be upper-level nosebleed seats that no one wants to sit in; reducing those clearly appears to be an aim. Additionally, a less capacious arena should result in better acoustics for the crucially lucrative, non-basketball entertainment – though it can never be enough to make a Miley Cyrus concert sound good.

An exclusive area stuck in the corner of the upper level feels like a tough sell as a VIP section. The rendered Panorama Club certainly does have a view; it just appears to be one of the worst in the arena, at least for anyone who actually cares about closely watching the game. Remember: in basketball, corner views are the worst; that's one of the biggest problems with the Bradley Center, which was built for an NHL team and has hockey sight lines that are especially awful in the corners. But while it may not be ideal for hardcore fans, with the right food and drink – especially drinks at the right price – the Panorama Club could succeed the way Miller Park's right-field TGI Fridays does with a younger, thirstier crowd at Brewers games.

Ennis and Mayo still on the team

Looking at the players the Bucks have on the court in the image, we can see No. 3 (who appears to have the ball) and No. 11. For the current roster, those jerseys would correspond to guards O.J. Mayo and Tyler Ennis, respectively. That's interesting. They appear to be breaking a full-court press, which is fairly unusual in the NBA, but maybe it's en vogue in 2018-19. Also, judging from the Jumbotron, the Bucks are playing the Pistons (even though the away-team uniforms look more like those of the Magic or Thunder) and our old friend Ersan Ilyasova is still in Detroit! He even seems to be playing defense in this weird future!

The crowd's really into it

Almost no one is on their phone, which is refreshing and quite unbelievable. Perhaps the Bucks are counting on the action being so riveting that even millennials will have to look up from Facebook. Or maybe everyone has the new Smart Brain, where they've got the internet and text messaging inside their heads and their eyes are cameras and ... um, sorry. Also, everyone is standing, suggesting the game is close or exciting, which, if they're playing the Pistons, well that just doesn't make any sense.

Judging from the people shown in the second rendering, the Bucks are drastically under-representing the number of jersey-wearers that go to their games, while drastically over-representing the number of white-haired old folks that go to their games. One of those old guys also appears to be lost, confused and looking into the sun for some reason (maybe it's an afternoon game)?

The glass atrium depicted here very closely resembles that at Lambeau Field, which is gorgeous from the outside and allows people to actually see out of it from the inside. Hopefully, in the new arena, people looking out from the glass atrium will be able to see something besides parking lots, as is the case currently in the Bradley Center.

One of the coolest elements in the renderings is the dynamic, interrelated feel of everything. In the lobby, the escalators, stairs and balconies all work to visually connect with each other and the other areas of the arena's interior. The grand entryway and the soaring towers further support that feeling of sweeping openness. Additionally, an accessible bar in the front concourse – that isn't a behind-closed-doors VIP club or up the escalators – would be a nice incentive to get fans (who might otherwise stay at the bars until the last minute) in the doors and mingling before tip-off.