What to expect from Nine Below golf tavern, opening below Beans & Barley

This summer, David and Marla Poytinger - who also own Splash Studio - plan to open Nine Below, a "maker's golf tavern" in the space below Beans & Barley, 1905 E. North Ave. See renderings of the 7,000-square foot space after the renovation process.

In August of 2016, David and Marla Poytinger plan to open Nine Below, a "maker’s golf tavern" in the area below Beans & Barley, 1905 E. North Ave. The name is inspired by the fact the space is, roughly, nine feet below ground as well as a reference to nine holes of golf and nine below par. (No, it's not a prediction of Wisconsin temperatures this winter.)

"We’re taking the concept of mini-golf and the concept of maker’s space and mashing them together to create something that is unique and exciting every time you come," says David.

The 7,000-square foot, lower-level space which formerly housed numerous nightclubs including Esoteria, Mantra Lounge, Decibel and most recently The Library Club, will undergo a major demolition and emerge as two nine-hole indoor miniature golf courses and a bar that will look and feel like being outdoors at dusk.

"We idolize places like Disney World and Universal Studios for the way that they not only transport you to a different world, but also manage the logistics of the experience so well," says David.

Guest golfers – which can include up to six per group – will come for a two-hour golf experience and customize or "make" a hole.

"We’re really trying not to be overtly sexual when talking about our business, but it’s not always easy," says David.

Mini golfers will be assigned a 150-square foot green plot and will receive 45 minutes to customize it. There will be three options for hole location, the option of rocks or sand, a choice of edging and a large selection of obstacle pieces ranging from ramps to classic windmills to a miniature Hoan Bridge or U.S. Bank Building.

After creating their green space, groups play a whole round of nine holes of golf. If there are not enough groups also creating holes, the staff will set up some of the plots themselves.

"It doesn’t matter if you come one time or 20 times, every time will be different," says Marla.

The Poytingers also own Splash Studio, a bar offering a live painting experience led by a trained artist, in the Third Ward.

"We believe people are looking for options like Splash Studio and Nine Below that provide a better value proposition than just dinner and drinks," says David.

Nine Below will also feature a full bar, accessible to mini golfers and non-mini golfers alike. In between the holes, there will be small counters with swing-out stools for golfers to take a break and / or rest their drinks.

A golf cart will also deliver drinks and snacks right to the holes.

Nine Below will offer a variety of beer, wine and cocktails, including golf-themed libations. Snacks will include pretzels from the Milwaukee Pretzel Company, nachos, doughnut holes and more. Eventually, the Poytingers hope to set up a catering relationship with Beans & Barley for corporate events and private parties which include use of an on-site "club house."

"We’re hoping to bring a different and new clientele to the East Side," says David.

Brookwater Construction will handle the build-out – using as much of the wood and materials already in the space as possible – to create pergolas, fences, canvas "sun shades" hanging from the ceiling, umbrellas and an abundance of strung patio lights to create what Marla refers to as "the beautiful soft glow of an outdoor beer garden."

All Nine Below guests must be at least 15 years old to golf and, of course, 21 to consume alcohol. The cost for a two-hour golfing experience will be $15-20, depending on day, time and number of people in the group.

Nine Below, like Splash, will be a tip-free bar. Instead, the absence of tips will be reflected in employees' hourly wages.

"We’ve found that when people aren’t competing for certain shifts or tables it creates a team environment among the staff," says Marla.

"The success of Splash Studio has taught us that if you build something creative and combine it with excellent execution, great customer service and a fair price point, the people of Milwaukee will support it," says David.

Here are three renderings of the space: 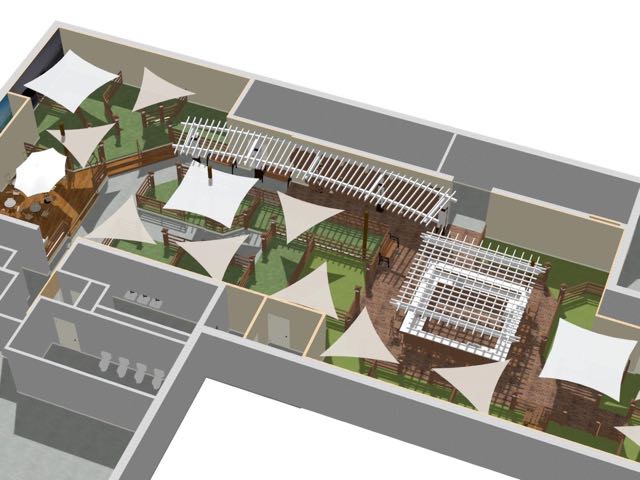 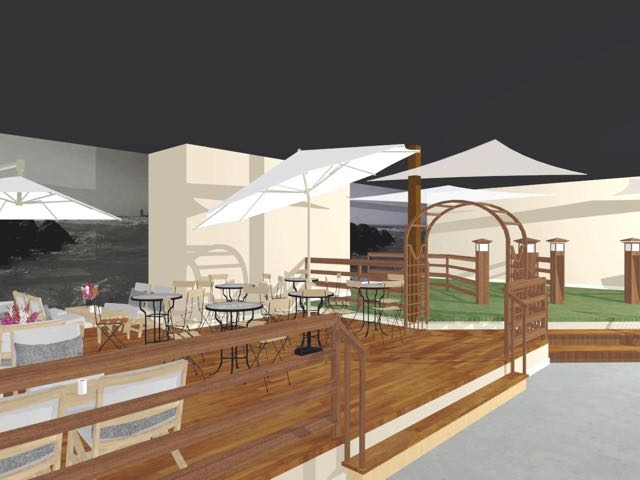 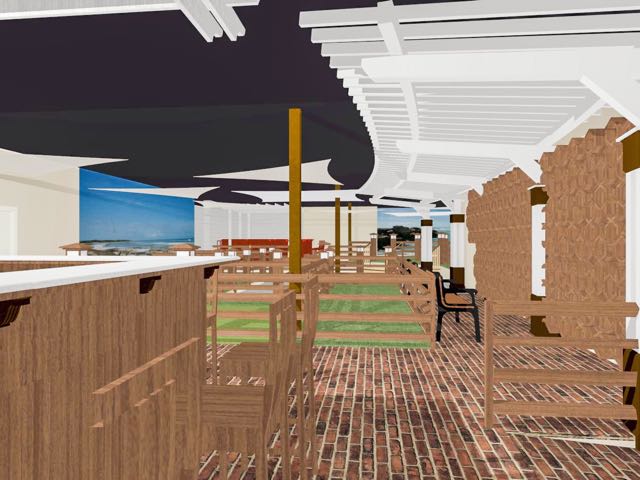