Milwaukee ranked poorly on a YWCA-commissioned assessment of employers' willingness to hire people with an irregular work history and limited "soft skills," such as showing up on time and getting along with supervisors.

Milwaukee ranked poorly on an assessment of employers’ willingness to hire people with an irregular work history and limited "soft skills," such as showing up on time and getting along with supervisors. The Community Readiness assessment was commissioned by YWCA Southeast Wisconsin, which released the results at a recent Employer Summit at the BMO Harris Bradley Center.

Community readiness is the degree to which a community is ready to take action on a specific issue. Readiness can range from zero, meaning the community is not aware of the issue, to nine, meaning that it has successful programs in place to address it.

Milwaukee scored at a level three, indicating that there is only a "vague level of awareness" of the challenges facing the city’s unemployed residents. The nine readiness stages are: (1) No awareness, (2) Denial/Resistance, (3) Vague awareness, (4) Pre-planning, (5) Preparation, (6) Initiation, (7) Stabilization, (8) Confirmation/Expansion, (9) Community Ownership.

"There is local concern, but no immediate motive to do anything about it," said Gary Hollander, an employer who attended the summit. "That needs to change."

The Community Readiness model was developed by the Tri-Ethnic Center for Prevention Research at Colorado State University and adapted by YWCA to fit Milwaukee’s needs. 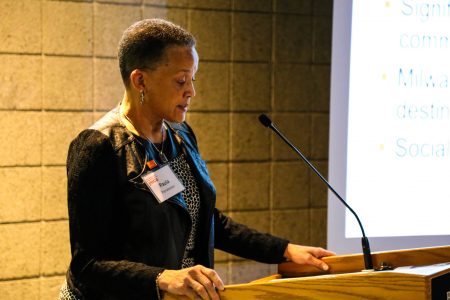 An analysis of the survey results determined Milwaukee’s score.

YWCA also organized focus groups of job seekers from its own program participants and other workers. The participants were asked what they perceived to be barriers to employment, how their employers view them and their personal experiences in the workforce. Their answers challenged the following assumptions: unemployed residents don’t want to work; seek jobs that they are under-qualified for; and don’t hold themselves accountable for employment challenges, according to a report on the Community Readiness assessment.

Job seekers expressed high levels of optimism and effort, despite lack of success.

One male job seeker reminded himself, "You cannot give up, Brother. Dust yourself off. You messed up in the past, but you got to tell yourself every day, ‘This one will turn that corner. This one. Hang in there.’"

The summit’s main goal was to help bridge the gap between employers’ readiness to hire outside the box and workers’ willingness to develop the soft skills they need to be hired.

"I grew frustrated with the statement, ‘We have tons of jobs and nobody to fill them,'" said Paula Penebaker, president and CEO of YWCA Southeast Wisconsin. "There are pools of prospective workers … but the people showing up lack soft skills," she added.

"Everyone says, ‘It’s not my problem,’ but I say it is. It’s all of our problem," said Theresa Jones, a member of Parklawn Assembly of God. "It’s going to take a village to move the needle on unemployment."

About 21 percent of unemployed people in Milwaukee are African-American, about 12 percent are Latino; 10 percent are Asian-American and 7 percent are white, according to the U.S. Census Bureau’s 2014 American Community Survey.

The assessment showed some employers recognized that racial segregation and income disparities reinforce biases against those seeking work. However, they had no solutions to these issues.

Ed Seaberg, vice president of Rockwell Automation and president of the Milwaukee Repertory, said that employers are to blame for these biases.

To address these questions, Seaberg conducted a bias class at Rockwell with senior management workers and some entry-level workers. The class members evaluated resumes and were asked, "Would you bring this person in for an interview?"

The resumes contained all the same information: the same skills, work experience and background. The only differences were the photograph and the name, yet the responses ranged from 30 to 90 on a scale from 1 to 100.

"We usually think through the lens of our own world, and when people come in who are outside of that lens, we view them harshly," Seaberg said to summit attendees.

She said that Parklawn Assembly of God decided to address the unemployment issue by partnering with the Department of Workforce Development to host a job fair on Sept. 20 attended by approximately 80 people; 25 individuals were hired on the spot, she said.

The church was inspired to help community members get jobs after an incident in August, shortly after the unrest in Sherman Park, in which more than 100 members from several churches gathered for a prayer walk at the park near Sherman and Auer streets. They circled together, praying over the community, its members and the high unemployment rates plaguing Milwaukee.

The group was deep in prayer when two young men walked over from a barbeque in a nearby yard. The men got into the circle and approached Bishop Walter Harvey, pastor at Parklawn Assembly of God, Jones recalled.

"We have been looking for you. Where have you been? Why are you over here praying for us when we are all over there?" the men said. "We need your help." As the conversation between Harvey and the men played out, the prayer circle shifted. In the middle were Harvey and the two young men, and on the outskirts were the church members.

"That’s when I realized, there is a difference between being in the community and being with the community," said Jones.

According to Penebaker, the YWCA is working on follow-up strategies. "We plan to make employers across Milwaukee aware of the report, and do as the readiness assessment suggests: create communication and motivation for change."

Pick 'n Save and Metro Market are seeking to hire up to 2,500 people