Turns out the prominent "That's All Folks! See you in 2017" graphic on the Alpine Valley website is only half right. According to MyWalworthCounty.com, Live Nation says that Alpine Valley Music Theatre in East Troy will not host concerts this season, due to a paucity of available artists.

Turns out the prominent "That’s all Folks! See you in 2017" graphic on a ticket broker's Alpine Valley website is only half right.

According to MyWalworthCounty.com, Live Nation says that Alpine Valley Music Theatre in East Troy will not host concerts this season, due to a paucity of available artists.

Hard to imagine that the sprawling green and forested grounds with the 37,000-seat capacity will remain quiet all summer, but apparently it's so. At press time, neither the venue's website nor its Facebook page is yet reporting this news.

Despite months of efforts to book the outdoor amphitheater, a Live Nation veep told Tracy Ouellette at MyWalworthCounty.com that it simply couldn’t get the deals done for 2017. 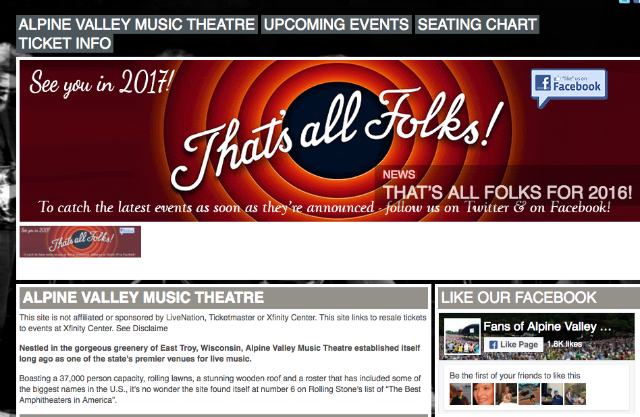 "It’s an unusual year in that a lot of artists we’ve traditionally hosted are playing in other buildings or not playing at all this season," Jon Reens, Live Nation vice-president of marketing for Midwest music, told Ouellette. "Whether it was touring schedules, or production design where they can’t fit on our stage, or other things, they were not able to confirm for 2017.

"Either they’re not coming through Wisconsin or are playing at places like Wrigley Field instead of Alpine Valley. Dave Matthews, the band, isn’t touring this year. Dave Matthews and Tim Reynolds are touring together, but they’re playing at Huntington Bank Pavilion at Northerly Island in Chicago."

The Matthews gig, which has become an Alpine Valley staple, takes place June 10-11 at the Huntington. Meanwhile, Phish, another East Troy favorite, has a slew of summer gigs this year, but they’re pretty much all at Madison Square Garden in New York City.

Ouellette reports that Live Nation will make the most of the quiet time to do maintenance work, upgrades and repairs, and plans to reopen next year.

"We have absolutely zero intention of abandoning the facility," Reens told her. "We are refocusing on 2018 to build a more robust schedule. We had to make a difficult decision to not open for this year, but we’re focusing on 2018."

Widespread Panic strikes Milwaukee - and the city couldn't be happier