There's a new bar and restaurant opening this week on Old World Third Street. Oak Barrel Public House will officially open its doors to the public on Friday, Feb. 9. In the meantime, we got a look at both the space and the food.

There’s a new bar and restaurant opening this week on Old World Third Street. Oak Barrel Public House will officially open its doors to the public on Friday, Feb. 9 at 1033 N. Old World Third St. in the space which formerly housed Giovanni’s and Comedy Cafe.

The concept for the venue began with a desire to focus on craft beer and whiskey, notes Bobby Wiltgen, managing partner at the The Who’s on Third Group. "Before refrigeration, both beer and whiskey were stored underground in barrels," he says, "and the concept is really built around that."

As a result, the interior of the new bar and restaurant, envisioned by Flux Design, showcases numerous oak barrels and oak barrel covers in numerous places, including above the bar.

"In the 1800s this was one of the largest hardware stores in the city," notes Wiltgen. "So we really wanted ties back to that as well." In turn, upcycled wood paneling, beams and industrial metal accents are also part of the mix. 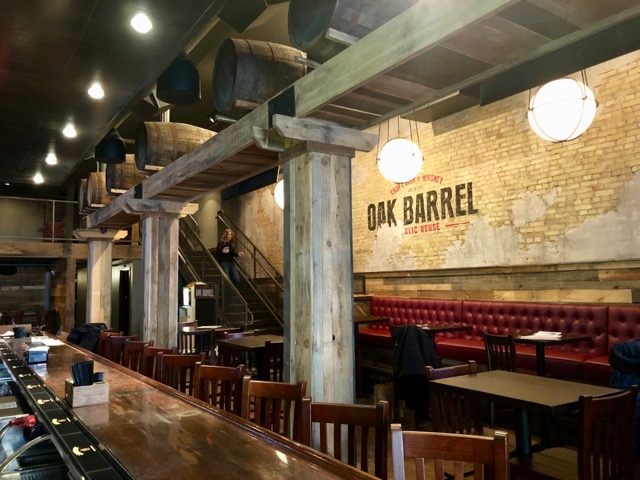 In addition to the first floor bar and dining area, the restaurant also features a semi-private dining area on the second floor mezzanine.

Wiltgen and his team also refurbished the second floor, which was home to Comedy Cafe, creating a space that can accommodate an additional 150 people. The space will function as overflow during busy times, as well as a space for private events. 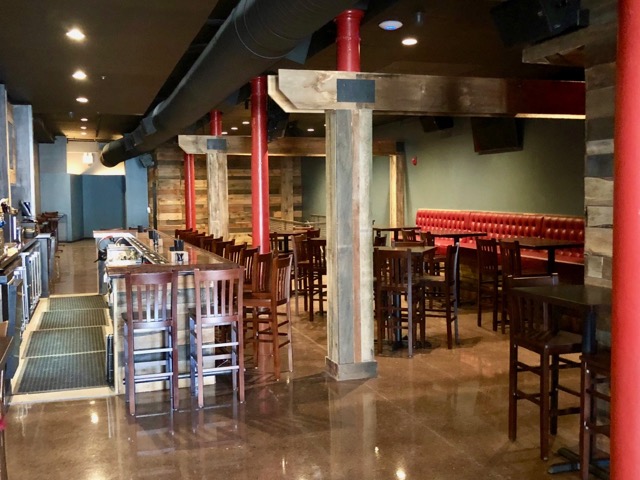 Chris Norton, who curated the selection of beer and whiskey for the Oak Barrel notes that the Oak Barrel will feature 16 taps with a focus on local craft beers, including a number of barrel aged brews. A nitro line will be dedicated to a seasonal beer; upon opening they will feature Central Waters Mud Puppy Porter.

Meanwhile, the bar will also stock 40-50 bottles of whiskey, including a large selection of bourbons, eight to ten Scotches and Irish Whiskey. Among highlights of the collection is Jefferson Aged at Sea, a bourbon that’s barrel aged on an ocean-bound ship, where temperature fluctuations, salt water air exposure, and constant motion create a unique flavor profile for the bourbon. "You can almost pick up on a sea salt flavor," says Norton.

Oak Barrel will also maintain a Jameson Caskmates program through which customers can purchase bottles of the Irish whiskey, which has been aged in either stout or IPA barrels – for $125 each. The bottles are displayed on the wall behind the bar, along with plaques engraved with the owner’s name. Once purchased, customers can drink free from their bottles on any future visit. There are 25 shots in a bottle, so purchasing a bottle saves the buyer anywhere between $30 and $40.

The menu at Oak Barrel focuses on American comfort foods, Wiltgen notes. "It’s all items that people love – including tacos, pizza and burgers – but that typically don’t appear on the same menu." 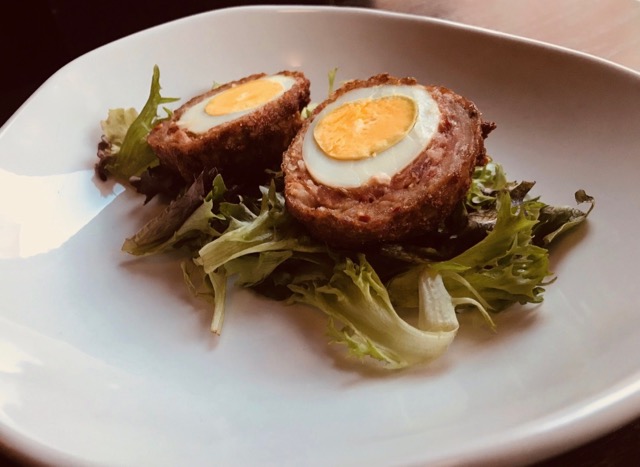 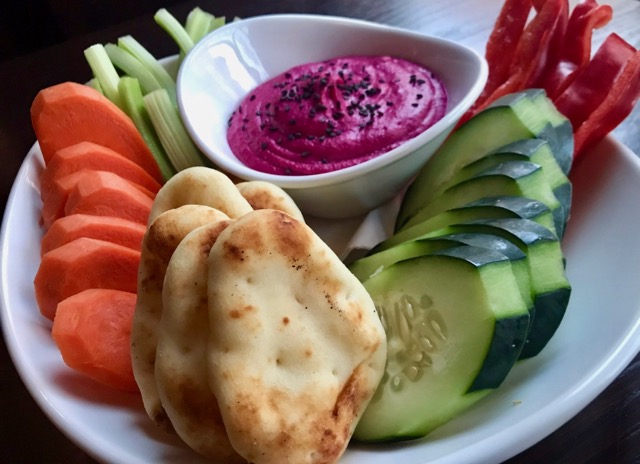 Thin-crust pizzas will be available in signature builds including meat lovers, bbq chicken and Thai chicken, along with the Caprizza, featuring house red sauce, fresh mozzarella, basil, tomatoes and balsamic glaze (12-inch for $13.95 and 16-inch for $16.95). Build-your-own pizzas will be a special offering on Thursday nights (after 6 p.m.) along with featured specials on pitchers of beer, bottles of wine and select whiskeys. 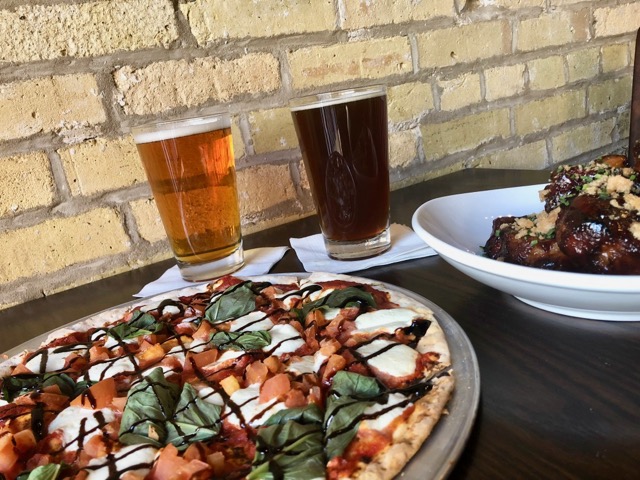 The Wisco Burger features a quarter-pound smashed butter burger with cheddar, muenster, bourbon cider thick cut bacon, pulled bacon and beer cheese sauce ($11.95). And yes, there is a burger in there, underneath all that cheese and pulled bacon. It's delicious. 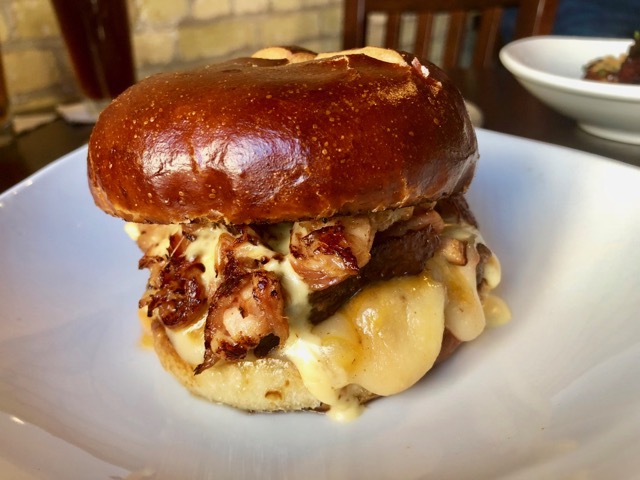 Among the taco selection (which also includes the option of substituting flour tortillas for a brown rice bowl), there are jackfruit carnitas (a delicious options for vegetarians), shrimp frita, pulled bacon and Korean bulgogi beef tacos along with Nashville hot chicken tacos served with house slaw and cilantro crema ($8.95). 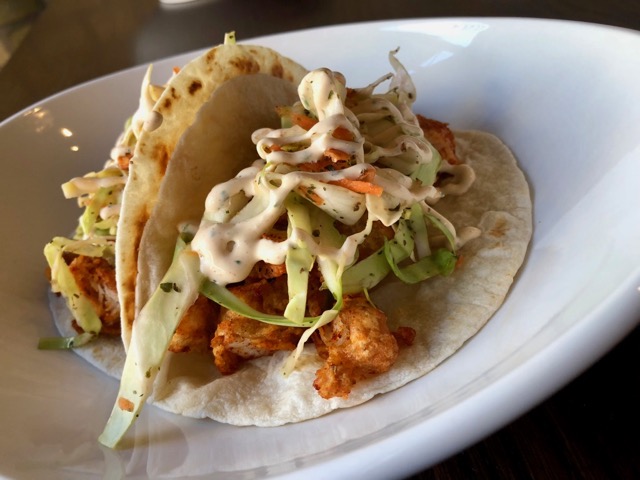 Beginning in about three weeks, Wiltgen says the Oak Barrel will also add brunch service on Saturday and Sundays.