Are these among Milwaukee's oldest sidewalks?

Will sidewalk replacement work in Washington Heights spell the end of some of the city's oldest surviving sidewalks?

This morning, my friend Barbara Haig sent me this news from her neighborhood:

"If you’ve walked the dog anywhere between Hi-Mount and 50th Street and Hawley from North Avenue to Vine Street, you’ve often had to navigate over broken sidewalks, uneven pathways and hunks of missing pavement.

"You’ve probably also seen the spray-painted marks indicating that something is going to be done about it.

"The city’s plan to reconstruct neighborhood sidewalks in Washington Heights was put on hold until now so construction wouldn’t disrupt school at Mount Olive and St. Sebastian. Some preliminary work was undertaken on Friday, and deconstruction is getting underway today.

"Gerard Berendt, the city’s sidewalk repair specialist, says the city is working a block at a time to get the 92,000 square feet of repaving done over about six weeks. The area near the schools will be done last.

"A removal crew from Snorek Paving will get rid of the bad areas, with the construction crew following.

"The plan is to close individual streets for less than a week at a time. Property owners will pay for the work – but they likely won’t get the special assessment for two years. If an owner sells the property, the assessment will come up in a title search."

One result of the work, however, is that what may be some of the oldest sidewalks – though there are a few that are a dozen years older – in the city might disappear. 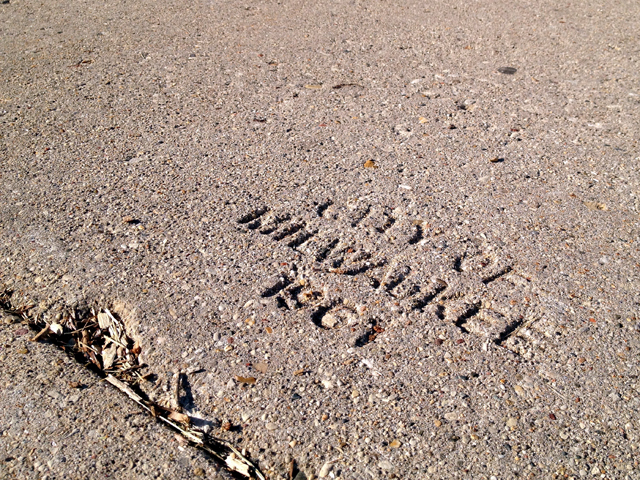 Some of the examples we've found in Washington Heights date to the 1920s, like the one pictured at the top.

That one was laid by Steigerwald Co., founded by German-born Edward Steigerwald, who came to Milwaukee around 1877 and launched his construction company in 1885.

Among the work completed by Steigerwald over the years were St. Sebastian and St. Michael's Churches, St. Mary's Academy, The Railway Exchange, The Enterprise Building and Gimbel's Downtown. Steigerwald also built buildings for Marquette University, Mount Mary College and Harley-Davidson. 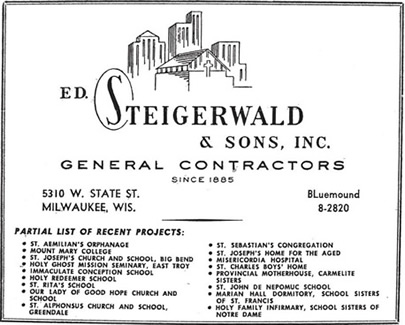 Steigerwald, who also served two terms as alderman in the city's old 19th Ward, died in 1937. His son John, who died in 1976, took over the business and ran it until his retirement in 1961. The company is still active as part of Dahlman Construction.

According to the Department of Public Works, there are a little more than two dozen sidewalks potentially dated earlier than 1922, however, it can be difficult to tell. And it's unclear what materials would've been used for those walks.

"Contractors are only required to 'stamp' the first and last concrete slabs in a project, not each slab in between," says the department's Communications Manager Sandra Rusch Walton. "So if either of those slabs have been replaced, you will see the new date stamps, yet the slabs in between may still be the older installations."

It's true that some vintage slabs aren't included on the list. Friends sent photos of a number of surviving examples from 1910 and 1917 that are not mentioned.

Also, some on the list might not survive. I tried to find the oldest walk on the DPW list – dating to 1870 – but the intersection where the list says it's located (8th and Hinman), was vacated in 2005, making it difficult, if not impossible, to find.

It's hard to say how many walks at other locations on the list suffered a similar fate.

Byron Kilbourn laid Milwaukee's first sidewalk – using wood planks rather than concrete – in 1836. Later, some sidewalks were paved with bricks.

According to a 1964 newspaper article, "The walks provided surer footing than gravel or mud, but also twisted ankle from loose boards and splinters for the unwary. And when pennies fell between the cracks, it was 'finders keepers.'"

"I have seen sidewalk markers, in bronze from the companies that did the concrete work – today’s contractors use city-approved stamps with which they stamp the concrete – going back to 1910, if my memory serves," says Carlen Hatala of the city's historic preservation office.

"There used to be many bronze markers (see below) in Bay View when we surveyed in 1990. Concrete sidewalks came in when concrete became economical to use." 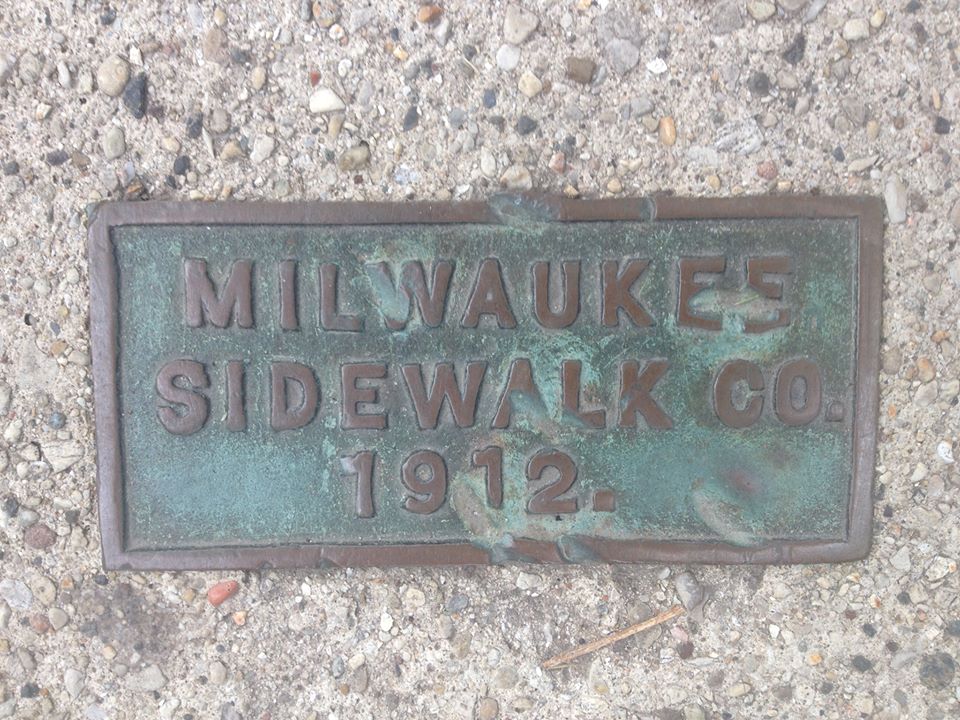 That 1964 newspaper article says the first cement sidewalks were laid in Milwaukee around the new central library building in 1898.

And as a bonus reminder that there's history to be found on every square inch of Milwaukee turf, here's a newspaper article about a horrific event near 8th and Hinman:

A case for Downer Avenue as my favorite Milwaukee street