You don't have to be THAT old to remember the days when Old Smoky used to serve Bay View. The neutered steam locomotive didn't go actually anywhere, but folks loved it just the same ... at least for a little while.

This article was first posted on May 22, 2002. We share it again today in conjunction with WUWM's Bubbler Talk spot on "Old Smoky."

You don't have to be THAT old to remember the days when Old Smoky used to serve Bay View. The neutered steam locomotive didn't go actually anywhere, but folks loved it just the same ... at least for a little while.

Kids would visit it and gaze in awe at the massive example of industrial achievement. Although some of us thought it was ancient, Smoky wasn't all that old.

It had a relatively short life hauling 80-90 freight cars between Milwaukee, Bensenville, Illinois, and Council Bluffs, Iowa. Smoky racked up 900,000 miles of service, which also included passenger service between Milwaukee and Minneapolis and Chicago and Omaha. 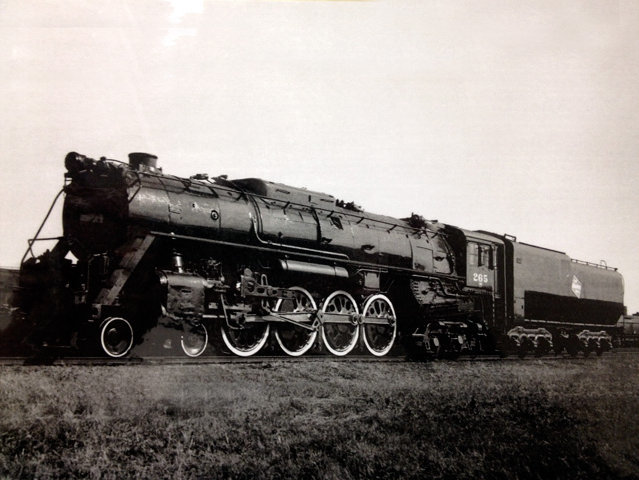 Just 10 years after it was delivered, Smoky was retired and the Milwaukee Road gave Smoky to Milwaukee to be used as an exhibit. She was placed on a spot near East Conway and South Bay Streets, west of the naval reserve armory, on Nov. 18, 1956. A dedication ceremony was held the following May.

The city erected a chain-link fence and some floodlighting and a life-like crew was installed in the cab by Milwaukee Public Museum artist Adolphe Seebach. A number of local labor unions donated time, effort and materials to set up the exhibit, at which two generations of kids would marvel.

The 4-8-4 engine (which meant it had four wheels up front, eight main drive wheels and four more smaller wheels at the back) was immediately popular and a group of citizens raised $7,000 for a fund created to maintain Old Smoky.

Although it sat immobile on a short section of track, behind a fence, the 412-ton Smoky was in full working order (oh, if only we kids had known THAT!).

Alas, all good things must come to an end and Smoky's tenure in Milwaukee was to be relatively short-lived.

In 1974, there was talk of moving the locomotive to Capitol Court, but that fell through, leading the Journal to write, "It is tough to get misty eyed over the fate of Old Smoky, though the decrepit steam locomotive's future has just taken a turn for the worse. Restoration of the giant engine to display quality appears an expensive and difficult job. The city, which will eventually have to move the powerless locomotive out of the path of the Lake Freeway, ought to think twice before it pours any money into this monument to vandalism."

The paper suggested the city find a group willing to restore the engine and donate it. And's that's exactly what happened.

In 1975, Smoky – which the Journal described as "Milwaukee's ignored and practically abandoned reminder of the great days of the steam locomotive"– was hitched up on April 7 and sent south – "dragged away to another final resting spot," in the words of the afternoon paper – to the Illinois Railway Museum in Union, Illinois, where it currently resides.