Oriental Theater is using shutdown to complete some much-needed work

In late June, Milwaukee Film announced that The Oriental Theatre, 2230 N. Farwell Ave., will remain closed until at least autumn, due to the coronavirus outbreak, but that it will use the time to make the next leap forward in its ongoing work to renovate and restore the 1927 movie palace.

In late June, Milwaukee Film announced that The Oriental Theatre, 2230 N. Farwell Ave., will remain closed until at least autumn, due to the coronavirus outbreak, but that it will use the time to make the next leap forward in its ongoing work to renovate and restore the 1927 movie palace.

This summer, work is being undertaken to replace the seats and carpeting in the east house and on the ground floor of the main house, to restore plaster on the ceiling and walls, improve sightlines and sound, and prepare for the future installation of the 1925 Wurlitzer theater organ Milwaukee Film has secured for the theater.

Plaster work on the ceiling has revealed bits of silver paint, which may be the original color and which may be recreated. 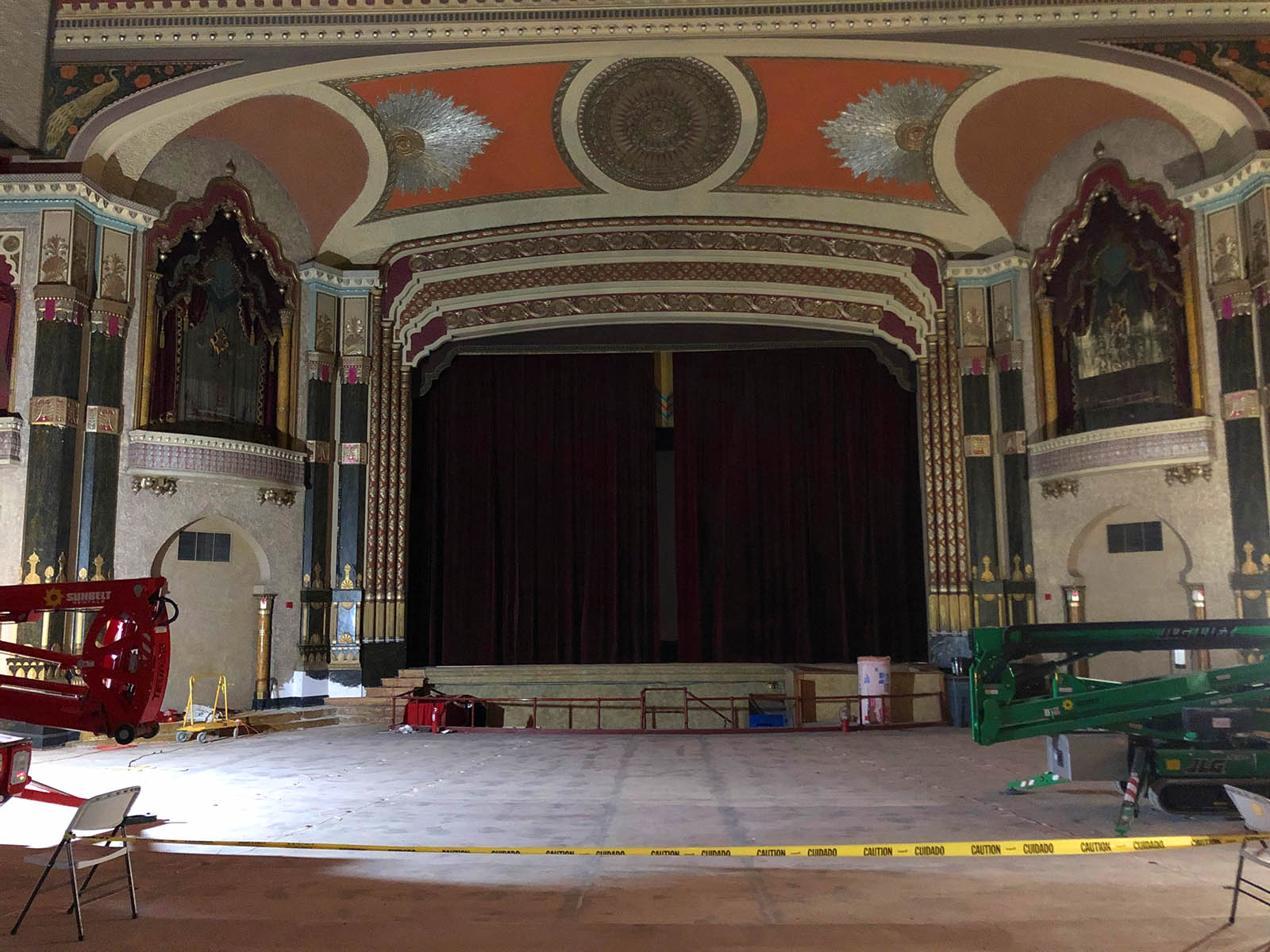 Phase two of the renovations, which you can read about here, were done in 2019. The work was begun in 2018, soon after Milwaukee Film acquired the long-term lease on the theater.

"This is the big one, the big kahuna," says Milwaukee Film's Sebastian Mei of the current work. "This has been the most challenging thing to figure out. It was going to be having to force us to close for up to four or five months to get all that plaster fixed. Now that we're forced to be closed, it's actually a good time to go ahead and do that."

In addition, says Mei, being closed is allowing the work to proceed at a lesser cost. 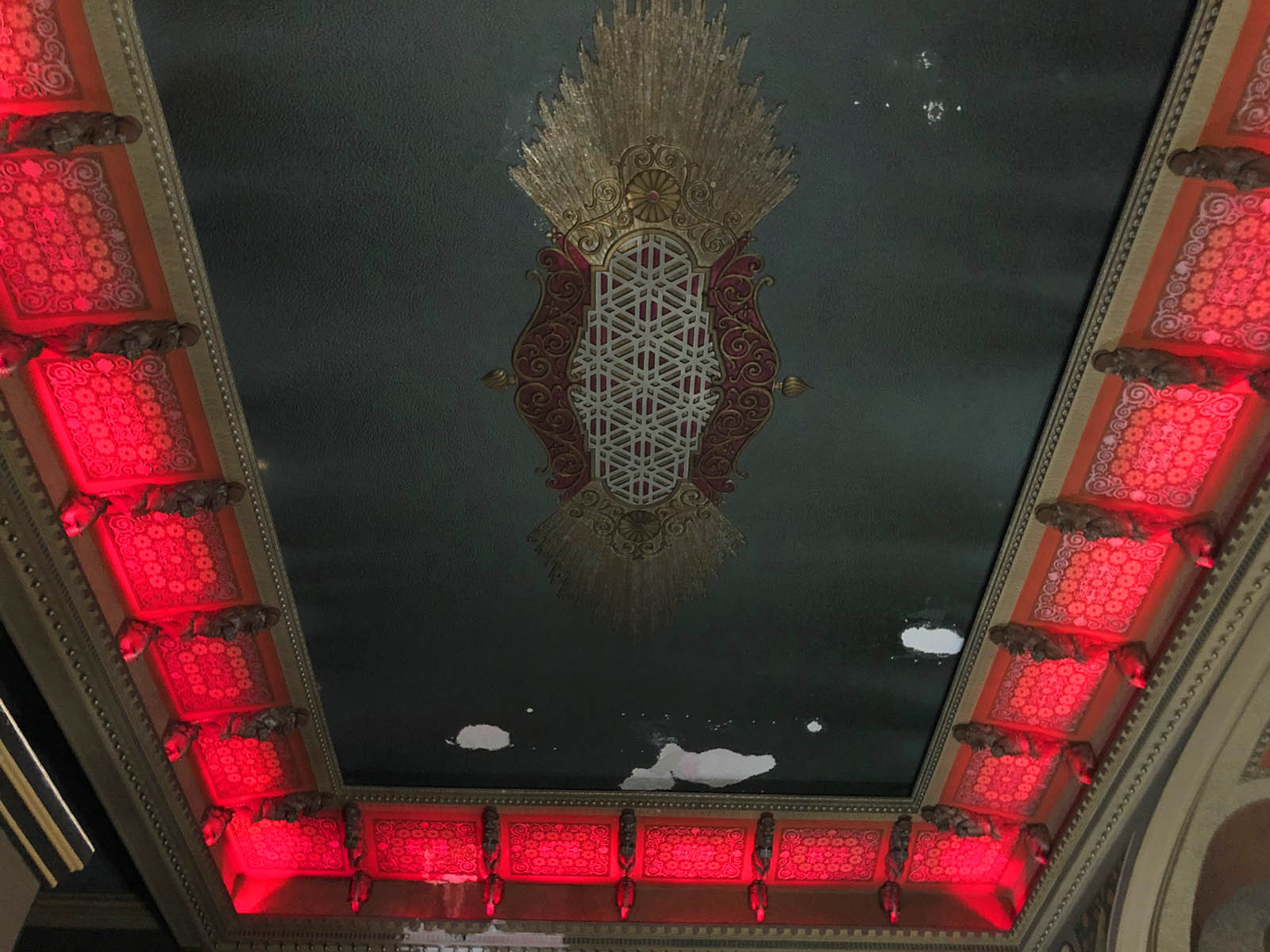 "They had also talked about putting in scaffolding all the way to the ceiling and call it a dance floor," he says with a smile. "We now, as you can see, have a sort of cherry-picker to do that work. It's a lot less intrusive and a little bit less expensive, as well."

It seems odd to say but at least in relation to the required renovations, the shutdown has been fortuitous.

"It's making lemons out of lemonade, as they say, and it's something that's been positive for us," says Mei.

"We would have worked in phases and we would've tried to figure out when the slow season would be for us, and we would have had to close again. The fact that we're forced to be closed now, we're trying to rush to get everything done as much as possible, so that when this all awfulness finally ends, we can actually open to a brand new shiny building that people are going to be impressed with." 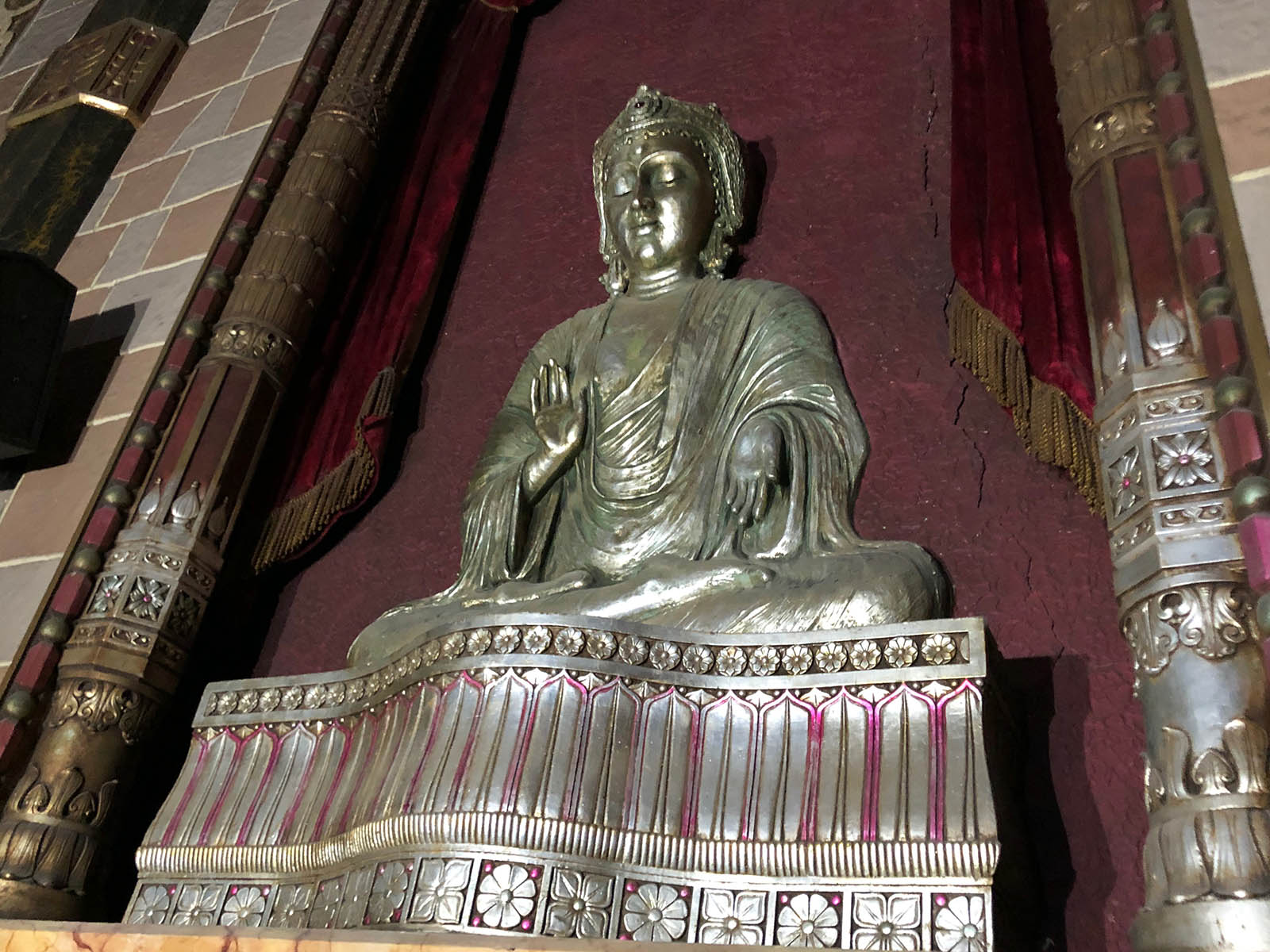 So, when is that reopening going to come?

"The plan for the construction to end is at the end of October," says Mei. "One of the things that we're going to be facing is lack of content, and that can be a little bit challenging in terms of what are we going to be screening. The theaters that are open now are playing old films from the '80s and '90s and throwbacks, the classics.

"So content is going to be a challenge for first run theaters, regardless of when our construction is done and when this pandemic passes, but in an ideal world, we'd be open in November."

And if that happens and there's no new content for the Oriental's three screens?

"So I think if it was safe to reopen for our staff and our patrons, we would most definitely reopen. We'd play ‘Goonies’ for 10 months if we had to. Just play ‘Goonies’ over and over."