9 memorable images from a Packers game we'd all rather forget

It wasn't all bad on Sunday night ... OK, it was about 97 percent bad. But here are a few of the more memorable moments and images from an ugly game we'll choose to never remember.

Indeed, Packers fans were stuck watching a rerun on Sunday night as the San Francisco 49ers once again boat-raced Green Bay in primetime, earning themselves a trip to the Super Bowl against the Kansas City Chiefs while the Pack  was sent back home. And while the final score was closer this time around, the actual game wasn't as the Niners ended the game pretty much by halftime with a 27-0 lead. It was so rough that I eventually went to see a movie about the death penalty just to lighten the mood.

Much like the Packers' last visit to the NFC Championship, I think we can all agree to toss this game into our mental trash baskets, never to be thought of and spoken of ever again. But it wasn't all bad on Sunday night ... OK, it was about 97 percent bad. But here are a few of the more memorable moments and images from an ugly game we'll choose to never remember. 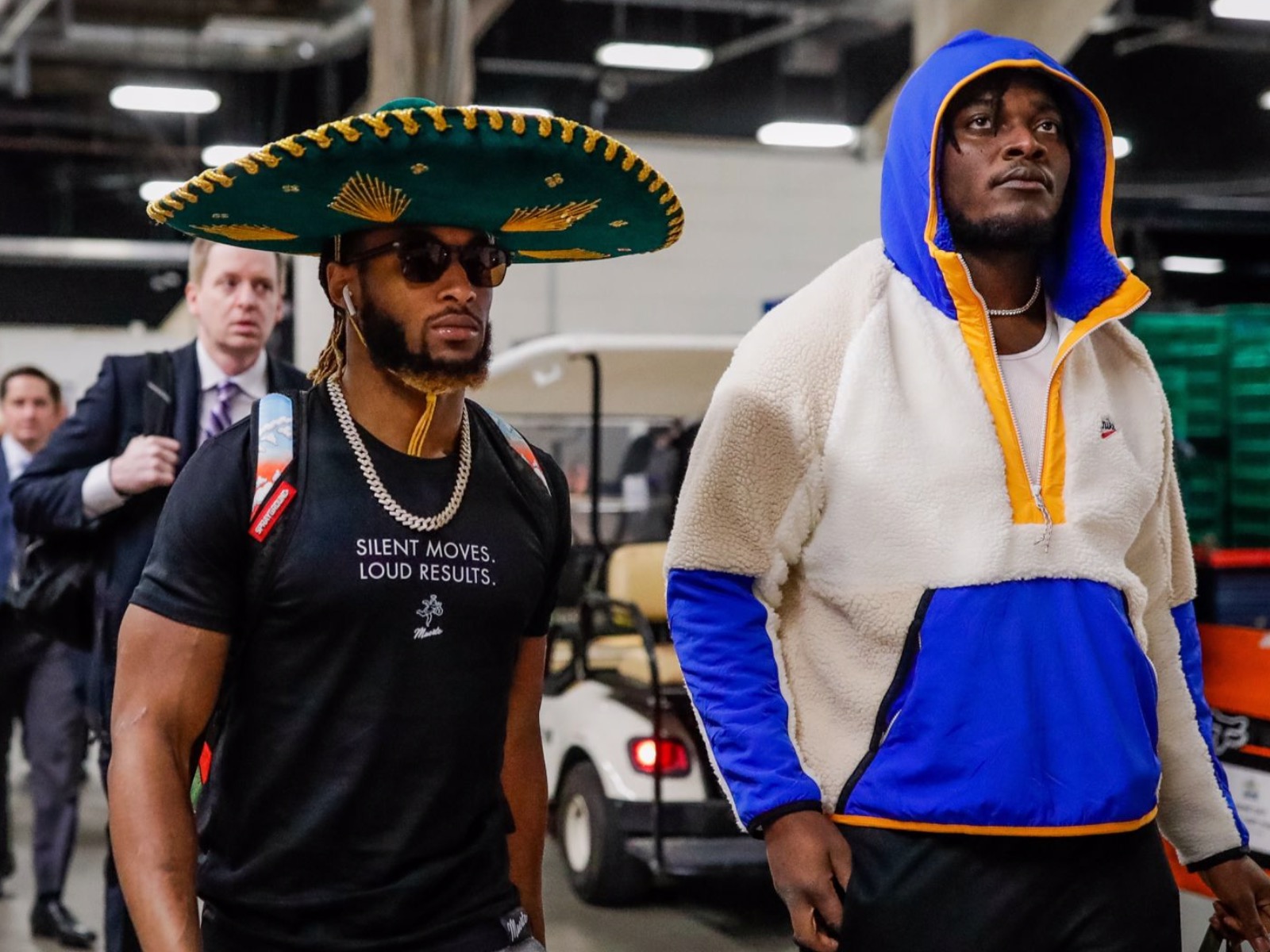 Of all the things I'll miss about the 2019-20 Green Bay Packers, the one I may miss the most is Aaron Jones' weekly pregame sombrero. I hope he chooses new iconic headwear every season. This year was a sombrero. Maybe next year he can bust out one of those tall black hats from Buckingham Palace or maybe a deerstalker cap a la Sherlock Holmes. The future is bright!

2. He forgot the ice

Indeed, while there was ice in the stadium hallways, the usual ice in Aaron Rodgers' veins was missing on Sunday as the quarterback coughed up the ball once to the 49ers on the ground (three times in all) and then, shockingly, tossed two interceptions – half of his total from the entire regular season. He did throw two touchdowns and 326 yards as well, but most of that came when the game was essentially over. Should've brought the ice!

3. A rare cameo from the defense 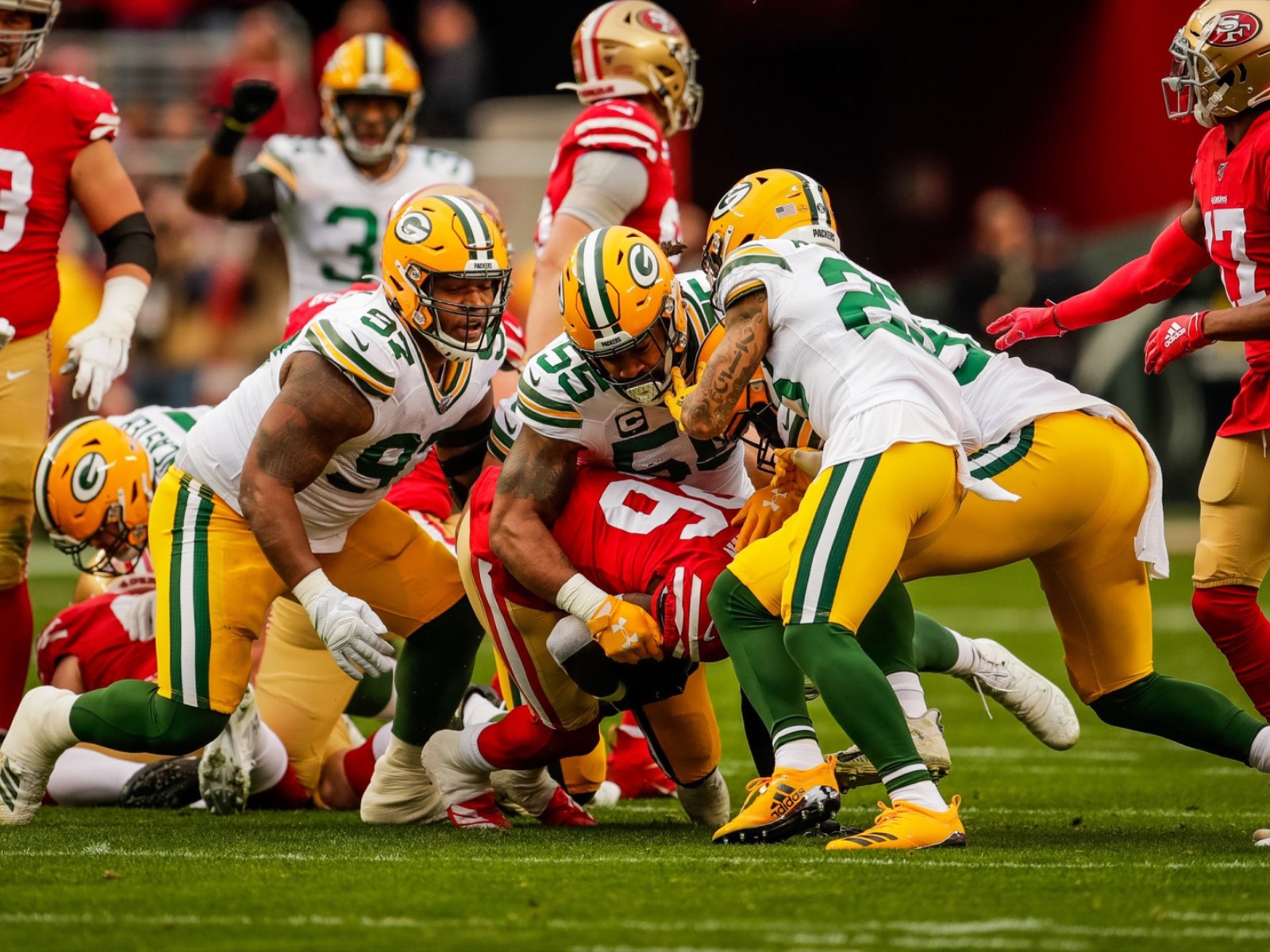 On the 49ers' first drive of the game, the Packers defense came up big handheld San Francisco to a three-and-out. And then who knows what happened after that because my brain has selectively blocked those three hours out of my memory.

A LIDS EMPLOYEE, ONE WEEK AGO: Are you sure, sir? No one's ever bought that one before. It's kinda just for display.
ROB LOWE: pic.twitter.com/dxsNYJuJIp — Chase Mitchell (@ChaseMit) January 20, 2020

"9-1-1: Lone Star" star Rob Lowe was in attendance for Sunday's big game, rooting for ... both teams to have a good time? Then again, what could be more Chris Traeger than choosing to not decide between the two teams and instead just rooting for sports in general.

Aaron Rodgers may not look like the star quarterback he once was – especially on Sunday night – but at least on this 65-yard dime to Davante Adams, he looked pretty vintage. Damn shame they were already down by three possessions at this point and I had resorted to watching the SAG Awards. 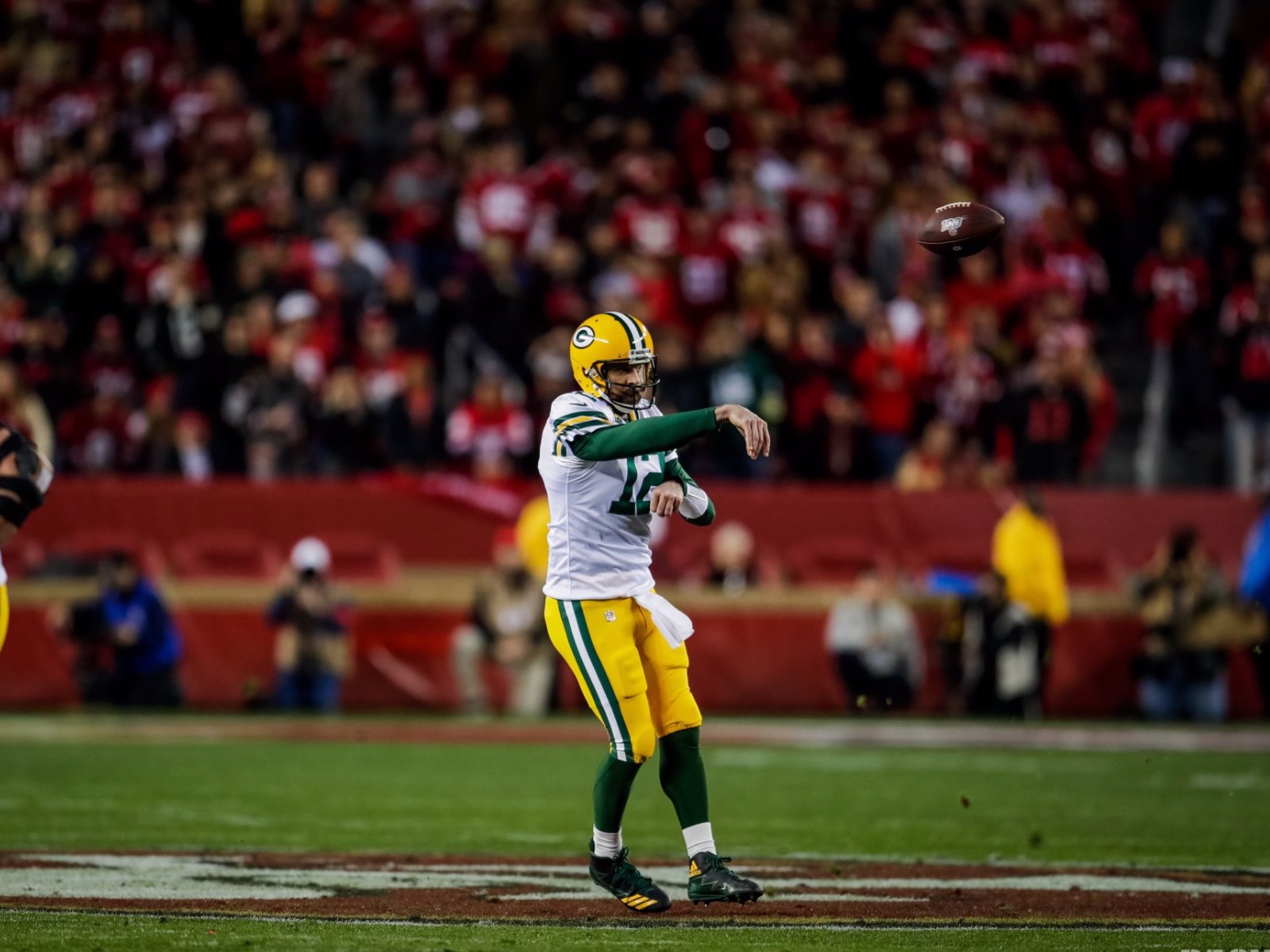 I don't know why, but these shots of Aaron Rodgers throwing a pass, complete with the crowd swirling, slurring and blurring into an impressionist backdrop, boggle my eyeballs in the best way possible. Here's a cool trick: If you hold this photo close to your face, slowly pull it away and cross your eyes, you can see a hidden Packers victory.

7. At least somebody had a good day

Well, at least one Packer had a Sunday to remember, as rookie tight end Jace Sternberger – who spent a majority of the season on the sideline injured – caught his first career NFL touchdown. Of course, he probably would've preferred it coming while not down 21 points in the fourth quarter – but hey, history happens when you least expect it, I guess.

8. Another rare appearance from the defense 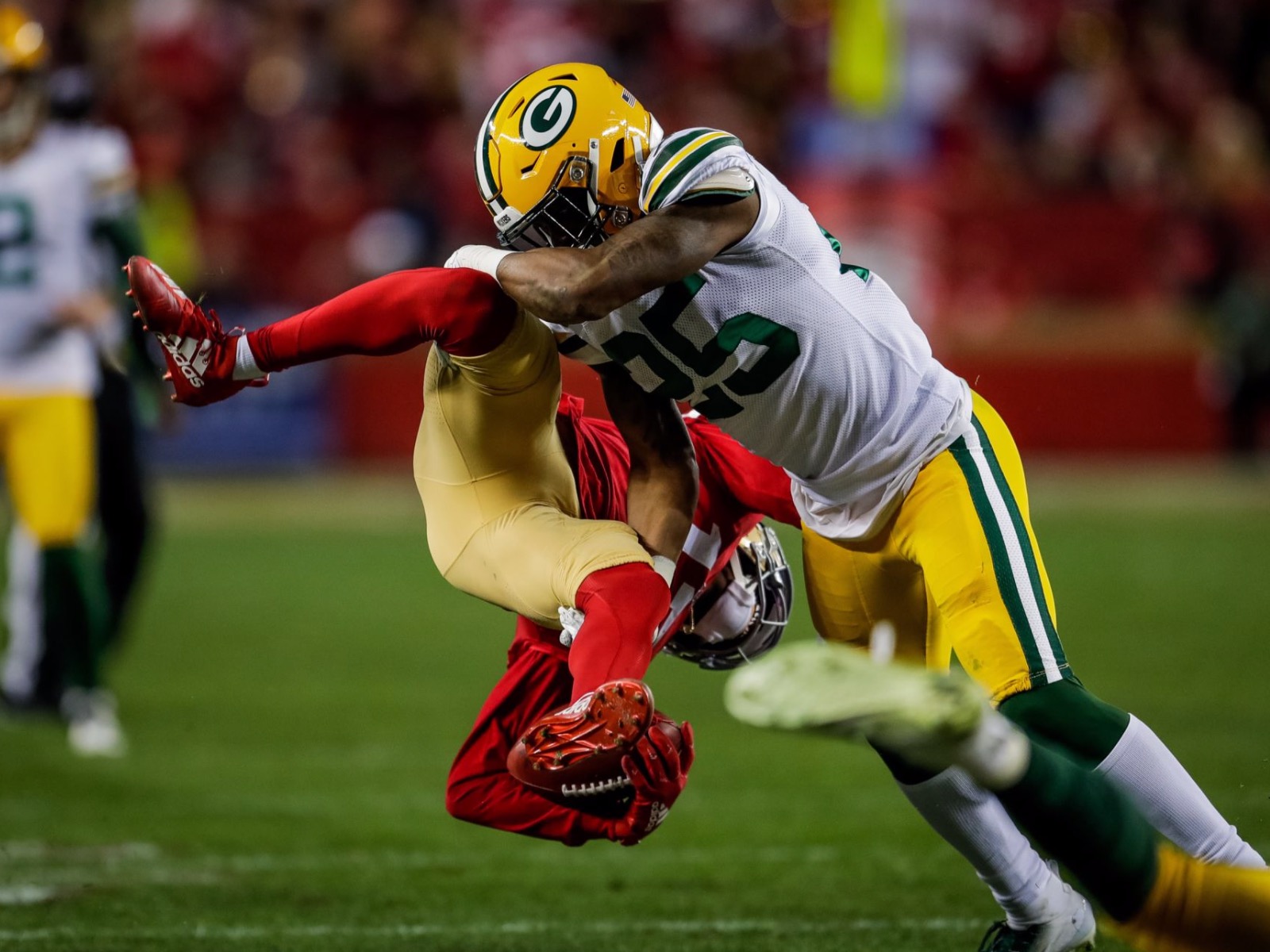 As cool is this photo looks, the Packers defense was getting hit far more than they were doing the hitting, as Green Bay wound up giving up 220 yards and four touchdowns to 49ers running back Raheem Mostert – a performance so demanding that Niners quarterback Jimmy Garoppolo only had to throw the ball eight times throughout the entire game. You'd think that the Packers defense would've expected the run at some point during the game and started scheming against it. You'd be wrong.

It may have come to an ugly end, but there's no questioning that the 2019-20 Green Bay Packers were a complete success.

The Packers were not supposed to win their division. They weren't supposed to make the NFC Championship game. They weren't even supposed to be that good, coming off a hapless 6-9-1 season and starting over with an unproven rookie head coach. This was supposed to just be a year of righting the ship; instead they sailed (through some admittedly rough waters) into the second best record in the conference and a game away from the Super Bowl.

There are certainly places to improve (*glares at Mike Pettine*), and 37-year-old Aaron Rodgers is almost certainly not going to return to his former MVP self in his remaining years. (We'll just have to settle for merely one of the ten best quarterbacks in the NFL, as opposed to the top five.) But hopefully the team next year will learn to play in a different A-Rod era and surround him with the best possible talent to maximize what he has left. Packers GM Brian Gutekunst has already proven that, unlike his predecessor, he's willing to spend to do that – and he doesn't even have to do that much considering the team's already got great pieces like Aaron Jones and Davante Adams ready to take the reins in a game when Aaron Rodgers can't.

Yes, it sucks to come this close yet fall short. (Again.) But I guess, until next football season, we'll just have to comfort ourselves in watching our two other MVP-led, playoff-caliber teams. Poor, poor us.