Even though it was a night to forget, at least it was a final result to remember, as the Green Bay Packers ground out a road win against a rattled and rusty Mitch Trubisky and the Chicago Bears, 10-3. Here are our favorite images from the night.

Indeed, the NFL started its 100th season with a game that felt 100 hours long, featuring a whole lot of punts, a whole lot of incomplete passes and a whole lot of shaky play. You almost get the impression it was the first game of the year for a lot of players who never stepped on the field during the preseason! We, as a country, owe soccer an apology for calling it boring when we sat and watched THAT for more than three hours.

But thankfully, if we're going to have to sit through a slog, at least there was a W on the other side of it. Yes, even though it was a night to forget, at least it was a final result to remember, as the Green Bay Packers ground out a road win against a rattled and rusty Mitch Trubisky and the Chicago Bears, 10-3. (For comparison's sake, over at Miller Park, the Cubs beat the Brewers, 10-5.) And while it was by no means pretty, there were some nice and notable moments to take in amongst the mess. So here are 10 of the few highlights and memorable images from Thursday night's kickoff non-classic.

1. What, you thought I was kidding about a punt being the highlight?

In a game mostly littered with incomplete passes, penalties and downright McCarthyian three-and-outs (don't forget our first regular season pass interference challenge, as well! That only felt like it took nine hours to resolve in the name of nothing!), yes, Packers punter JK Scott had the highlight of the night as, under two minutes left, boomed a 63-yard punt, forcing the Bears to start from their own 14 with the game on the line. (After, of course, a penalty call on the play, too.) Special teams AND defense playing well and delivering in the clutch? WHO ARE THESE PEOPLE AND WHAT HAVE THEY DONE WITH THE GREEN BAY PACKERS!?

Oh, and for a bonus image, this:

audibly gasped in the bar when this replay came on. jk scott is earning my only A+ of the night pic.twitter.com/0ntpvaw6Gw — Megan Schuster (@megschuster) September 6, 2019

My hamstrings hurt just looking at that.

2. The moment I knew the Bears would lose

I know this is a Bears coach Adam Nagy's tribute to Chicago great George Halas, but unless you're starring in a mobster movie, wearing a fedora in public should not be allowed. It is the double doink of fashion statements and is almost exclusively rocked by sad guys who try flirting with women by talking in over-literate 1920s slang and saying "m'lady" before complaining that girls don't like dating nice guys at the end of their lonely night. And it's not even a Stanzo brand fedora!

3. Halloween's not for another month

WHAT DID I SAY ABOUT WEARING FEDORAS IN PUBLIC!? Because tonight marked the start of the NFL's 100th year, the NBC crew decided to open the game up dressed as 1920s newspaper men, complete with three-piece suits and paper press badges wedged into dapper fedoras. Everybody looked pretty embarrassed about it, but at least it gave us all a chance to bust out our beset 1900s clipped-speech newspaper man impressions. EY MISTA GILROY, GOT A BIG OL' HUMDINGER OF A SCOOP, YA SEE, EY!

What you are currently looking at is the only touchdown of the current NFL season. Hey, at least it's ours! Aaron Rodgers connected with embattled tight end Jimmy Graham for this eight-yard touchdown strike that felt oddly Favre-ian coming from the usually risk-averse Rodgers. But thankfully, Rodgers' dangerous flip into the end zone found its way into Graham's arms for the only thing resembling excitement last night that didn't come off JK Scott's leg.

That is, unless you are the Chicago Bears. Then you should consider being someone else.

7. What am I looking at here 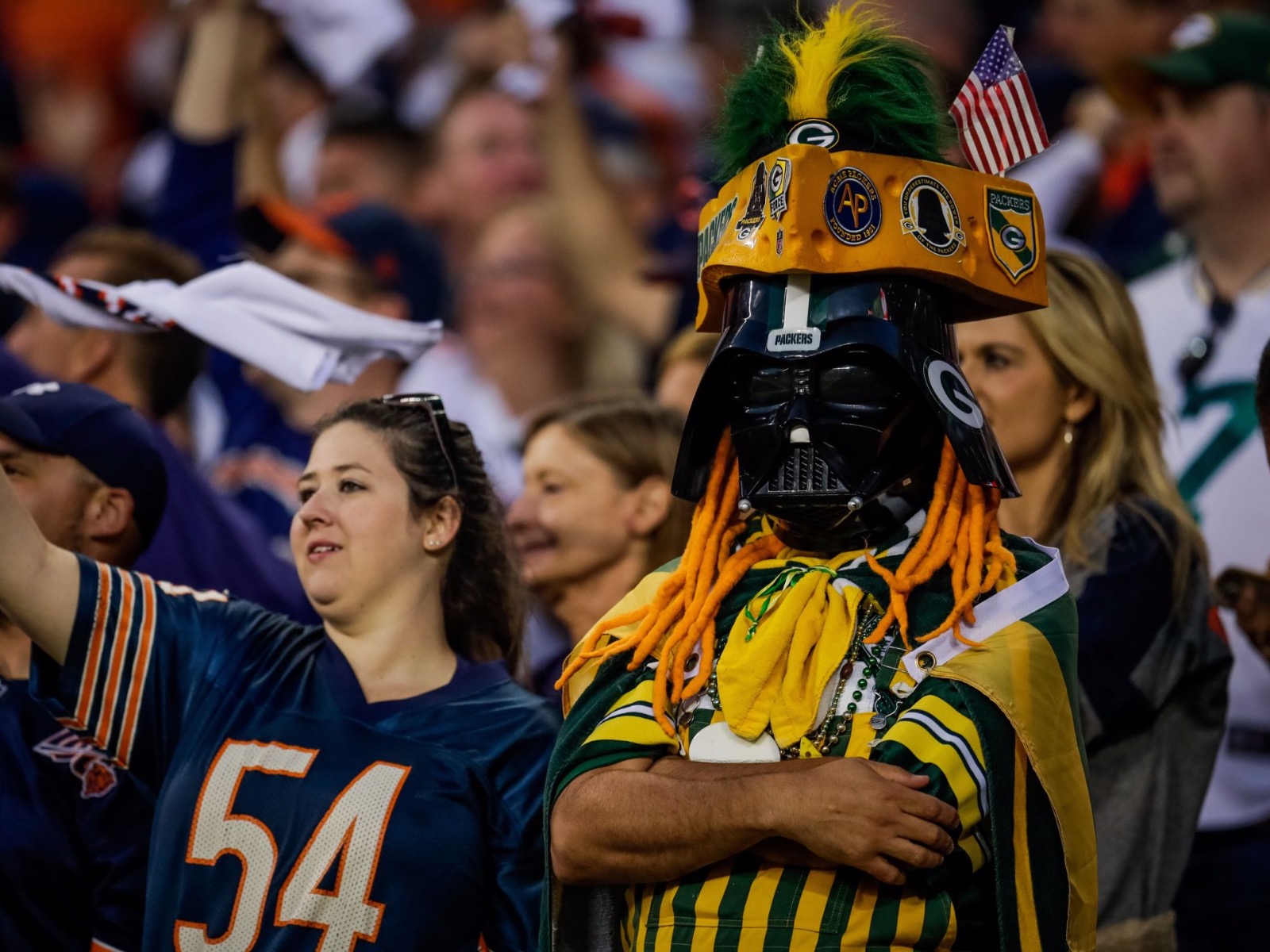 Why wear just a regular old cheesehead when you can wear a ... um ... a patriotic Darth Predator cheesehead with a dead skunk painted green and gold on top? Certainly points for creativity – though this fan does know that Darth Vader is, uh, the BAD guy in "Star Wars," right? But hey, at least it's not a fedora.

While the National Football League celebrated its history Thursday night, the Green Bay Packers quietly paid tribute to a little bit of its own as their helmets were decorated with small patches in remembrance of Bart Starr, the Packers great who led the team to some of their iconic early Super Bowl success and who passed away this past May at the age of 85 after a long, beloved and impactful life both on the field and off. I'd be fine seeing these patches on Green Bay's helmets for the rest of the season. It's a fine tribute – and plus they're currently undefeated.

Seeing a competent defense in Green Bay is like seeing an empty parking spot on a lawn by Lambeau Field on a Sunday or seeing Travis Shaw get a hit: It just doesn't happen. OR SO WE THOUGHT! After a massive overhaul involving multiple draft picks and some significant free agent signings, defensive coordinator Mike Pettine and his Green Bay Packers defense looked ... great? Is that even possible?

Sure, the Mitch Trubisky helped out by looking extraordinarily shaky, firing off target the entire night, but the defense deserves credit for keeping him off-balance the entire night and refusing to let the running game make up for his shortcomings Thursday night. Mike Pettine deserved every bit of the love he received at the end of the game, from his defense and from Aaron Rodgers.

It seemed like Mike Pettine was the one who just won his first game as head coach. #GBvCHI #NFL100 pic.twitter.com/aUjTb52cco — KellyiztheBest (@kellyizthebest) September 6, 2019 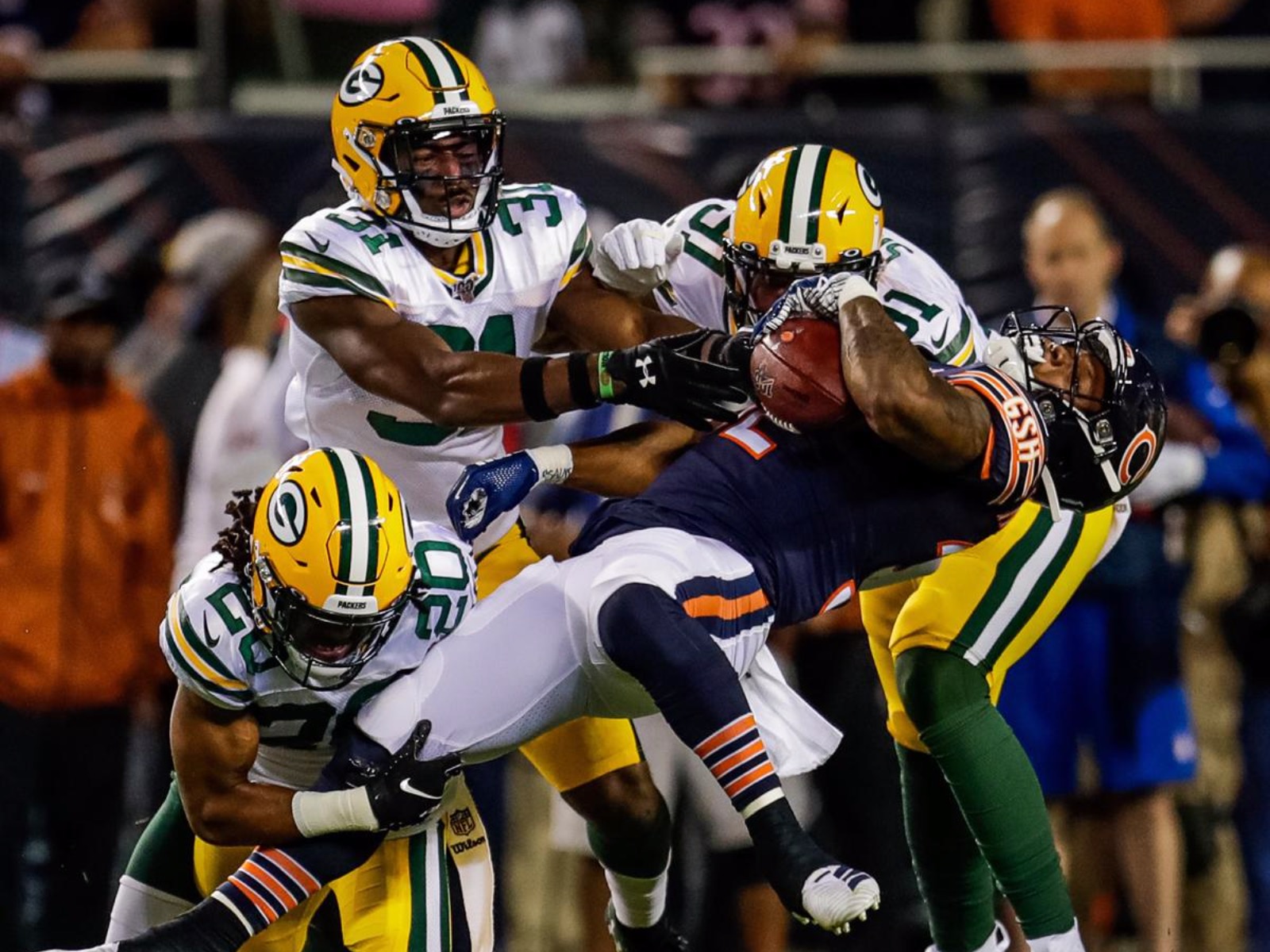 It's worth saying again: Finally. After years of a "bend-don't-break" approach that always broke and having to rely on Aaron Rodgers to outscore the other team, the Packers, indeed, have a defense – one that saw several of the new additions making key contributions, from rookie Darnell Savage's strong pass coverage to former Bear Adrian Amos' clutch interception and the game-sealing sack from free agent signing Preston Smith.

We'll see how they fare against less rusty teams with more proven offensive playmakers – but that's a concern for another week. (Probably next week, as the Pack will take on the far more concerning combination of Stefan Diggs, Adam Thielen, Kirk Cousins and the rounded Vikings offense.) In the meantime, let's just savor the fact that Rodgers doesn't have to put up 35 points singlehandedly and hope he gets the ball last to win football games anymore.

Though more than 10 would be nice next time.