Packers vs. Falcons: Who has the better celebrity fans?

The Packers will face the Atlanta Falcons on Sunday in the NFC Championship game, and while you can find plenty of analysis breaking down the two MVP-caliber quarterbacks and more, we're asking the hard question: Which team has the best celeb fans?

The Packers will face the Atlanta Falcons on Sunday in the NFC Championship Game, and while you can find plenty of analysis breaking down the two MVP-caliber quarterbacks, the impact of injuries to both sides, the quality of the Gatorade on both benches and more, we have a much bigger question to analyze going into this weekend's massive football clash.

Which team has the best famous fans?

We're using science – aka totally subjective opinion – to pair up some of the two teams' finest celebrity supporters and see whose are best. The team with the most winning celebrities will win Sunday's game. Obviously. Maybe. Probably unrelated outcomes, really, but let's do this!

Foster: Last May, the "Silence of the Lambs" star donned a cheesehead on "Conan," explaining why the "outfits" convinced her to become a fan and talking about her collection of Packers cheese merchandise.

Jackson: The coolest man in Hollywood is notably a huge Atlanta Falcons fan, showing up to games decked out in Falcons gear and providing the face and voice for the team's "Rise Up" campaign in 2014.

Verdict: It's hard to vote against Jackson, the most badass of badass motherf*ckers – especially when Foster admits in the "Conan" clip that she'll hop to a winning team if necessary (poor form). Then again, Foster has two Oscar wins as opposed to Jackson's one mere nomination. Also, the Binks-Christensen Doctrine of 1999 notes that no person involved with the "Star Wars" prequels can be claimed a winner at anything, so, sorry, Sam. We don't make the rules; we just enforce them. Point: Packers

Lil Wayne vs. Ludacris (and Big Boi and T.I.)


Lil Wayne: Despite being a New Orleans native, the famous rapper became a Packers fan after his father saw the green and gold win Super Bowl XXXI in the Superdome. Since then, he's been an avid fan, even remixing Wiz Khalifa's Steelers-based hit "Black and Yellow" to "Green and Yellow" for the Pack.

Ludacris/Big Boi/T.I.: Unsurprisingly, these three proud ATL natives have notably thrown their support behind the Falcons.

Verdict: Considering the state of the Green Bay rap scene (which is to say no state) having any major hip-hop support for the Pack is a win in its own right. But Atlanta just has more – and that's not even including Future, who recently showed up on the sidelines for the Falcons win over the Seahawks. Point: Falcons

Van Susteren: As a Wisconsin native, it's no surprise the veteran Fox News – now MSNBC – political host and commentator is a Packers fan.

Carter: According to the locals, the former president is apparently not just a staple at Braves games, but also can be found cheering on the Flyin' Matt Ryans.

Andrews: While she has to be impartial now, the famed Fox Sports sideline reporter told Southern Living magazine in an interview that she grew up watching the Packers, thanks to her dad. She also dressed up as Clay Matthews for Halloween one year. So much for that seeming impartial stuff.

Sager: Before his fashion choices became a NBA sideline staple, the dearly departed sports reporter was a major name in Atlanta team coverage – which makes sense that he would grow into a nationally familiar face on Atlanta-based Turner Sports.

Verdict: While we appreciate Andrews' sideline reporting skills – and that her subliminal childhood bias toward the Pack might help balance out that Buck/Aikman bias that TOTALLY exists (side eye for days) – you have to go with Sager. Previously, for the daredevil wardrobe, now for the sentimentality. Point: Falcons


Ortiz: Despite living in Patriots country, the retired Boston Red Sox slugger is actually a Packers fan, thanks to his wife, whom he met while he was playing in the minors with Appleton's own Wisconsin Timber Rattlers.

Newton: Last year's NFL MVP may play for the Carolina Panthers, but apparently he's a Falcons fan – at least when he's not trying to beat them twice a year.

Verdict: As impressive as it is to have a rival team's star quarterback claim you as a fan, it makes me grin from ear to ear that a Boston (pardon me, I mean, BAWSton) sports icon chooses the Packers over the Patriots. Imagine how deflating that must be for Tom Brady. Point: Packers


Cable Guy: When he's not shilling for heartburn medicine, Larry the Cable Guy is apparently a Packers fan, popping up in a 2010 "Fox and Friends" interview to claim his green and gold love.

Foxworthy: When he's not shilling for Golden Corral buffet meals, Jeff Foxworthy is apparently a Falcons fan, popping up in a 2011 Atlanta Falcons hype video with other celebs and stars.

Reynolds/Timberlake: The "Deadpool" star is Canadian, and since there's no NFL team up in Canada, we can only assume he found the next closest team to root for: ours. Apparently, he also has a man crush on Brett Favre.

One of my all time heroes. My father would have flipped to see this. Thanks @Favre4Official pic.twitter.com/emWoysMtZo — Ryan Reynolds (@VancityReynolds) February 6, 2016

Or at least that's just one of his man crushes.

We see you, Ryan Reynolds and Andrew Garfield. #GoldenGlobes pic.twitter.com/lNP0M3JJPq

And speaking of handsome Packer fans from surprising places, despite being typically tight with teams from his home state of Tennessee, Justin Timberlake is also a Packers fan (though judging from the tone in the People interview, it might be more of a hostage situation).

Usher: The Atlanta resident is a popular sight at Falcons games and most recently tweeted out a photo with him and fellow Falcon fans Ludacris and ...

Verdict: This Michael B. Jordan development does complicate things. But I mean, come on; how are you going to pick against Deadpool and half of the "D*ck in a Box" team? Point: Packers

Van Der Beek: Dawson is still a working actor – and also apparently a cheesehead! According to IMDB, when he wore No. 4 in the movie "Varsity Blues," it was a tribute to Favre, and he was seen tailgating at a Packers game in the past.

No, that's Justin Timberlake in a green shirt shotgunning a beer. 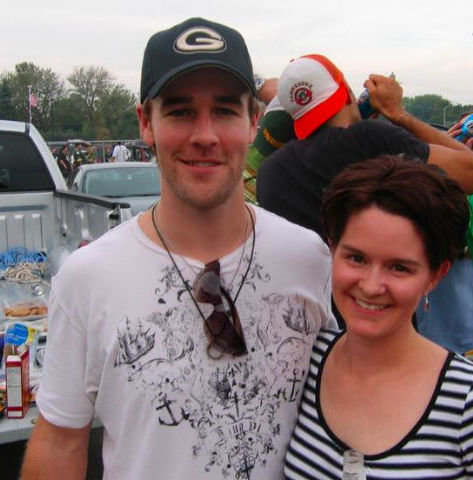 Patrick: Robert Patrick is most famous for playing the still-coolest special effect in Hollywood history, the T-1000 in "Terminator 2: Judgment Day." He was so cool, we honestly would've been OK if he pulled off killing John Connor (though Edward Furlong's performance might have had something to do with that). Nowadays, he's most famously popping up on "Scorpion," that show you see ads for during CBS football games that's not "NCIS."

... I kinda dig the post-famous James Van Der Beek career of appearing in sitcoms to make fun of himself ("Don't Trust The B in Apartment 23" shoutout; it's on Netflix and stars Jessica Jones!). It certainly beats Patrick's film career being in direct-to-video Westerns co-starring Frankie Muniz. Point: Packers

Leary: Talking with Rich Eisen, hardcore Bostonian Leary discussed his Packers fandom – apparently something he did just to troll his Patriots-loving brother, back when they were younger. Still, he stuck to it – even when the Packers were miserable.

Thompson: The SNL mainstay and "Good Burger" star has fun relaxing on Sundays after a hard night's work apparently by cheering on the Falcons. He was interviewed as a part of the Falcons' website for a mock draft article, and he's turned up on the sidelines.

Verdict: While Leary's a Packers fan, he's also loyal to the Patriots. And not only does that set up for a very uncomfortable potential Super Bowl matchup this year, but you're either all in or not. Point: Falcons

Munn: While Rodgers has been lighting up opponents' defenses, Munn – who started dating Rodgers in 2014 – has been lighting up the big screen. Unfortunately, in the likes of "Mortdecai," "X-Men: Apocalypse" and "Office Christmas Party," but hey, better IMDB credits than most. Also: She had the perfect GIF reaction for last weekend's epic Packers-Cowboys conclusion. Also also: She's good with swords.

Did I mention how much I just totally loved  "Mortdecai" and "X-Men: Apocalypse" and "Office Christmas Party"? (Please don't hurt me.)

Marshall: Marshall – who works with the WNBA's Atlanta Dream – met Ryan when the two went to school at Boston College and got married in 2011. And while Ryan gets all the athletic glory now, Marshall was apparently a sports star herself back in school, setting records in Maine high school basketball.

Styles: The One Direction heartthrob is a surprisingly vocal Packers fan for a guy who grew up a whole continent away from Lambeau, often cheering and decking himself out in Packers gear on social media, and even having a Packers tattoo. An odd, but appreciated, amount of passion for a guy who's probably more familiar with the other football.

Bieber: Just like his mentor Usher, the Biebz is also Falcons fan, appearing at a game with then-girlfriend Selena Gomez in 2011 and then for some other games too ... though the formerly fluffy-haired pop star isn't exactly known for his sports team loyalty. Check in with this dude when the Falcons go 4-12 again.

Verdict: No one wins this fight. Point: Nobody

And the final tally is ... a tie?! Thanks a lot, science. Well, hopefully Sunday's game won't be this close.

Chicag-owned: 8 cool images from the Packers' 24-14 win over the Bears