10 memorable images from the Packers' messy win over the Lions

While we go to give the social media intern at the Detroit Free Press a hug, take a look back at a memorably messy game (for literally everybody involved) with these ten key images from Monday night.

The Packers struggled Monday night at home against the Detroit Lions (blame it on the white jerseys; seriously, burn them). They couldn't catch the ball. They turned the ball over. They weren't particularly great at stopping the Lions on defense. And yet, as has become the storyline of this early season, Green Bay won anyway, 23-22, thanks to Mason Crosby's game-winning kick, some late-game heroics from a wide receiver you probably never heard of until Monday night and some, uh, debatable penalties, to put it generously. Let's see how the Detroit newspaper is handling things!

Lions blow a 13-point lead, settle for 5 field goals and have multiple blown calls go against them but, on the bright side, in 5 billion years the sun will swell into a red giant, vaporize the Earth and obliterate all evidence of this game happening — Detroit Free Press (@freep) October 15, 2019

Watching the Detroit Lions is like eating a sandwich

Except the sandwich is on fire

And you're in hell

Well, while we go to give the social media intern at the Detroit Free Press a hug, take a look back at a memorably messy game (for literally everybody involved) with these nine key images from Monday night.

Here are the two "hands to the face" penalties called against Lions DE Trey Flowers in the 4th quarter #DETvsGB pic.twitter.com/pxGlqowaDY

So ... what's everybody talking about this morning?

But you know what: Maybe this is payback for the first-half Lions rushing touchdown that sure never looked definitively like the running back broke the plane of the endzone. Or maybe it's payback from the Eagles game when their defensive back bear-hugged our receiver on a key final play. Or payback for the Fail Mary because, honestly, even years later, we still deserve reparations from that. As it turns out, things even out. Bad calls happen, and admittedly the ones Monday night certainly suck ... but maybe these backbreaking moments would've suck a little less if the Lions had scored touchdowns instead of settled for field goals throughout the game, keeping the Packers within spitting distance despite outplaying them for most of the game.

In conclusion, you hate to see a bad penalty call help change the outcome of a game, but the Lions did plenty to lose it all on their own Monday night.

Za'Darius Smith celebrated his sack by getting ready for school 🤣🤣 @TheRealZSmith pic.twitter.com/WSVS6czHEt — The Checkdown (@thecheckdown) October 15, 2019

It's a shame the referees are taking all the spotlight after the game from what should be the main postgame topic: Za'Darius Smith's utterly delightful sack celebration, waking up and hurrying off to school. (Or, according to him, to meetings, but we like the school storyline more.) We've now seen at least three memorable post-sack celebrations from Za'Darius Smith – the sneaky feed me, the   Ray Lewis response and now this – and considering the creativity involved (oh, and also the yardage lost for our opponent), I hope they never stop. Za'Darius Smith is the gift that keeps on giving – and GIFing in the case of these celebrations.

Talk about a comedown.

After last week's star-making turn scoring four touchdowns against the Dallas Cowboys and waving the rivals into dust, Aaron Jones ... did not have that kind of performance on Monday night. First, he coughed up the football on a rushing play, handing the Lions another chance to increase their early lead. Then he dropped an easy guaranteed touchdown that hit him right in the hands but apparently burned him like acid. He would seemingly disappear for the rest of the night after that frankly remarkable display of Teflon hands, while fellow running back Jamaal Williams – last seen alarmingly concussed on the field against Philadelphia – took over his role, getting three more carries than Jones, scampering for over 100 yards and actually catching a touchdown pass.

Here's to next week, Aaron.

Jones told Shepherd he would split the under money with him. pic.twitter.com/tWMUWSrEI2 — BETSPERTS (@betsperts) October 15, 2019

In fairness to Aaron Jones, nobody's hands on the Green Bay receiving corps had a good night – and Jones' night looked damn near spectacular as compared to backup receiver Darrius Shepherd, who also fumbled the ball away muffing a punt and also dropped a key redzone pass from Aaron Rodgers. But at least when Jones dropped a possible touchdown, he didn't let the pass hit him right in the mush, then gift the ball into the hands of a Lions defender.

In conclusion, get better soon, Davante. We miss you.

5. Brass knuckles ... because sure

Did anyone ask for Brantley Gilbert to perform on MNF?? Also why does he have brass knuckles on his mic? #pleasemakeitstop #MNF pic.twitter.com/RvrrCcJ4yf — Drew Zakmin (@1HLpodcast) October 15, 2019

I feel like punching someone with a brass-knuckled microphone is a good way to end up with a broken microphone. Anyways, it was around this time I switched channels to watch the St. Louis Cardinals get curb-stomped by the Nationals and go down 3-0 in the NLCS. What a great sports night! 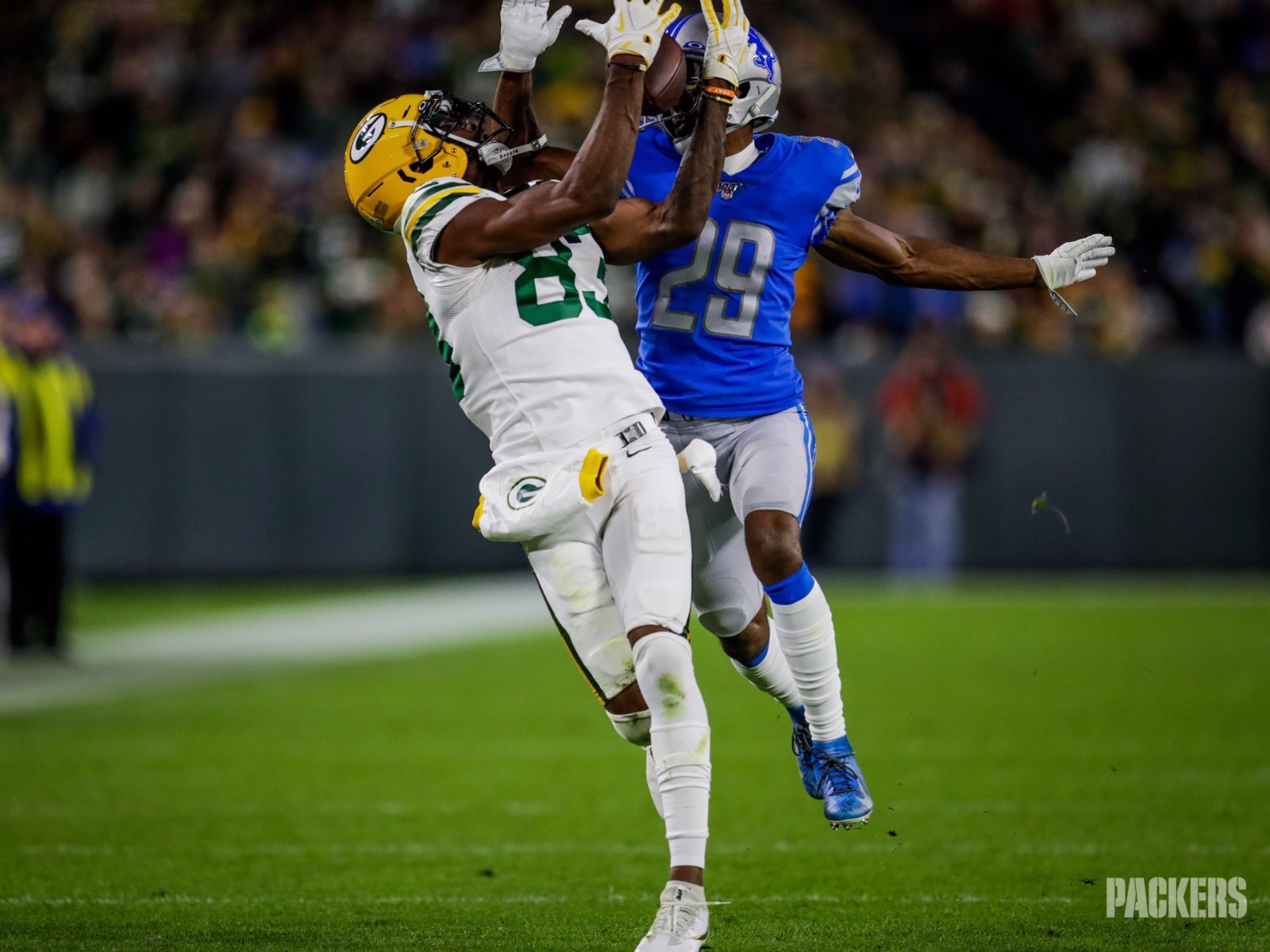 The trendy opinion on Aaron Rodgers these days is that he's not as good as he used to be, that he's lost a step and he misses more passes than he would've in his prime years. And sure, maybe Rodgers is in the backslide of his career ... but he can still drop perfect dimes like this gorgeous second-half pass to Marquez Valdes-Scantling. (And in an even more stunning development, the receiver caught the pass!) Rodgers may not be the unquestionable best in the game anymore, but he's still one of just a handful of great quarterbacks in the NFL who can make a pass like this and make it look easy. Don't take great quarterbacking for granted; just ask the Bears. 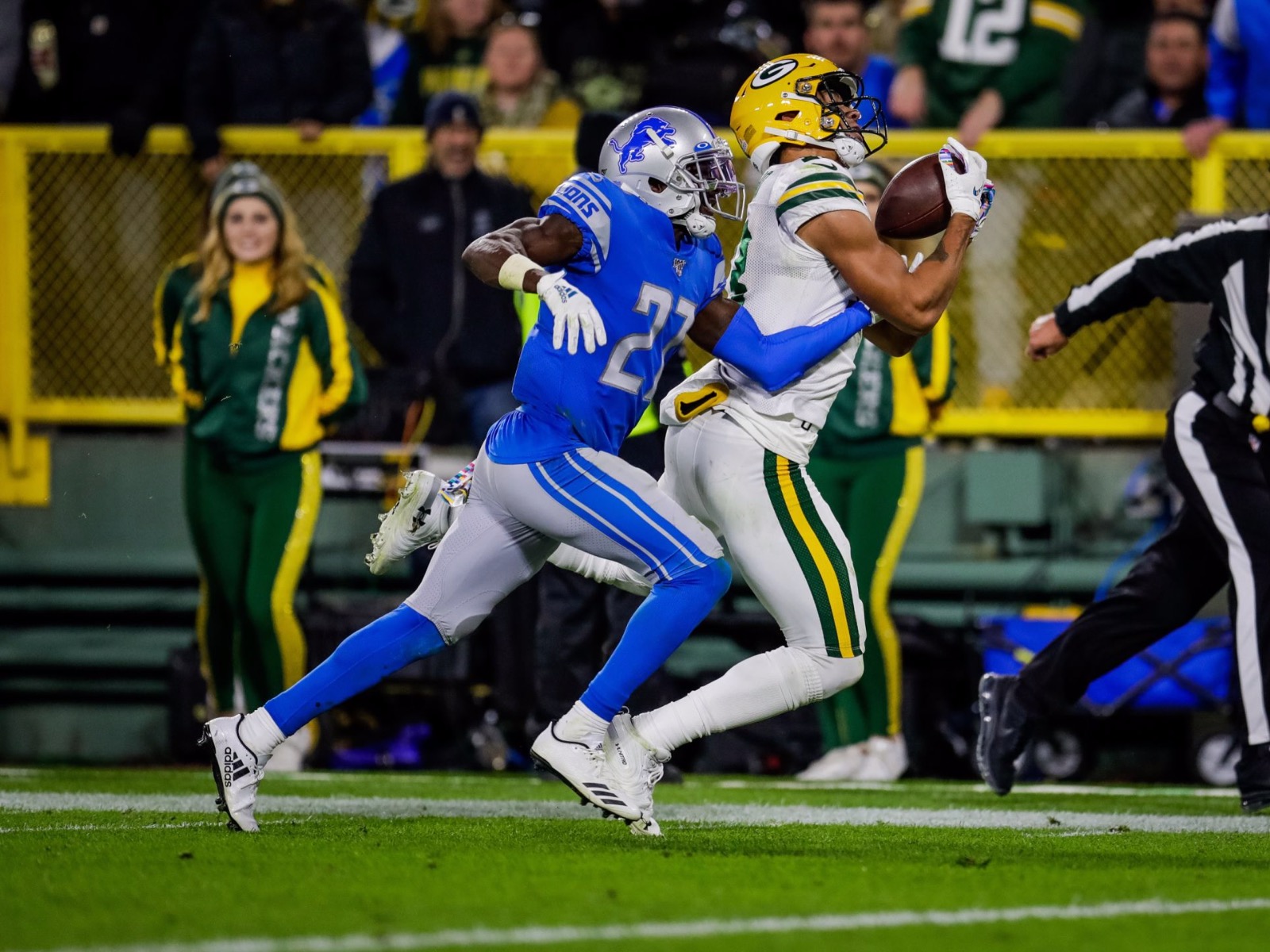 Meet Allen Lazard. Apparently he was the only receiver on the Green Bay Packers who remembered his Stickum on Monday night. Lazard finished the night with four catches for 65 yards – not monster stats, but each one of those catches, including a key touchdown in the final frame, seemed massive and provided at least somebody in the receiving corps who Aaron Rodgers could trust to catch the football.

8. Somebody stop hitting the lights

Dear Lambeau Field ... again: Please stop flickering the lights on and off when the Packers score a touchdown. My mind never thinks it's a celebration. I just always think the breaker blew. We already have a great scoring celebration – which speaking of ...

9. Crosby in the clutch

GET IN THE STANDS, OLD MAN!

Almost exactly a year ago, against these very Detroit Lions, Mason Crosby had the worst game of his otherwise impressive career, missing five kicks – the most missed in a single game in two decades. So Monday night provided all too perfect redemption for the team's all-time leading scorer, as he nailed all five of his kicks including the game-winner. And if that doesn't deserve a leap into the Lambeau seats, we don't know what does. 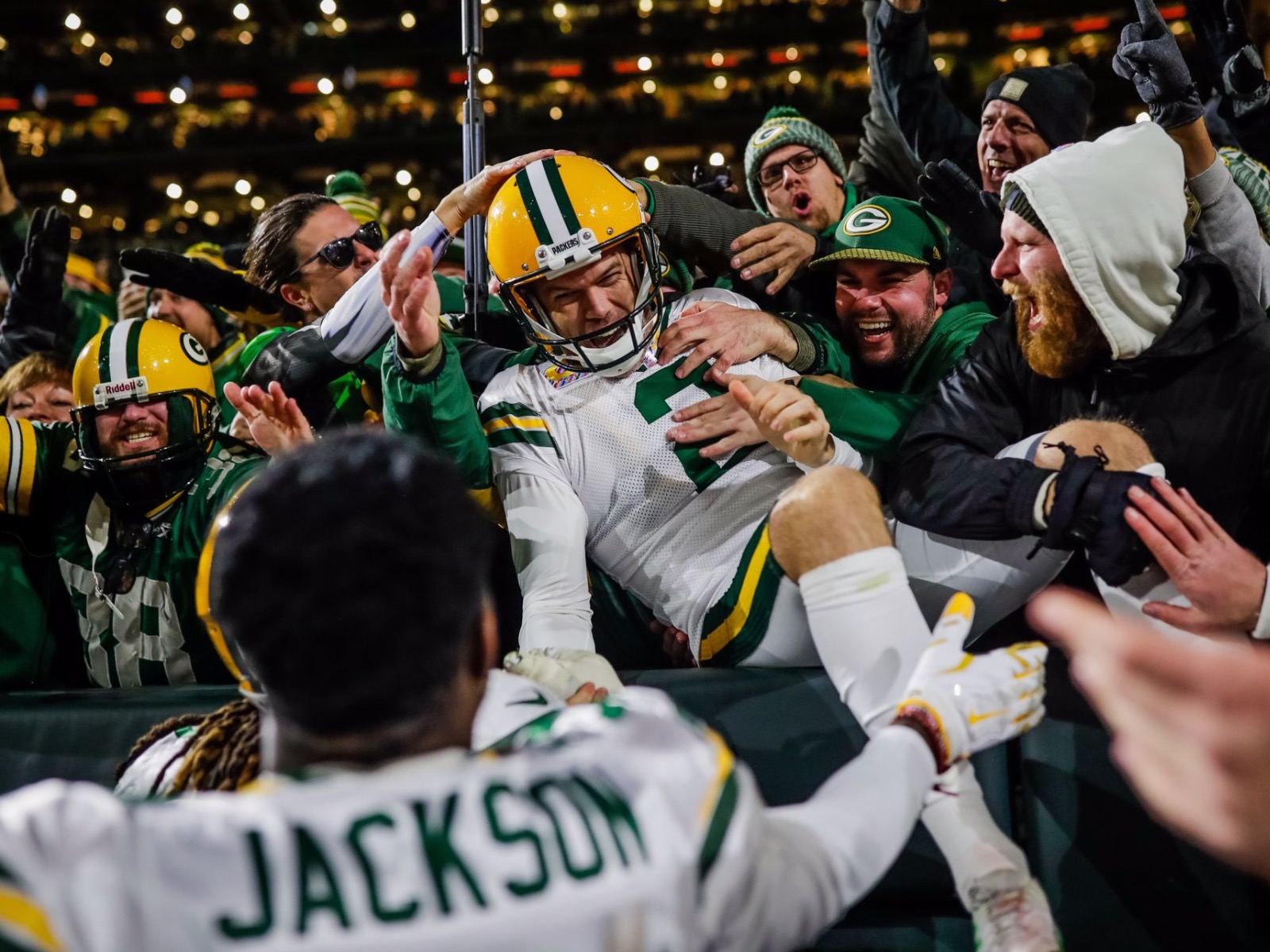