All week leading up to the Packers' Aaron Rodgers-less matchup with the Saints, Mike McCarthy and his players talked about how confident they were in Brett Hundley. After New Orleans' 26-17 win in Green Bay on Sunday, when McCarthy showed little belief in Hundley and the QB didn't earn it, what now?

All week, leading up to the Packers’ Aaron Rodgers-less matchup with the Saints, head coach Mike McCarthy and his players talked about how confident they were in backup Brett Hundley, stressing the quarterback’s familiarity with the offense, his talent and poise and the experienced team around him as reasons to be optimistic. Of course, they were never going to say anything negative, but it genuinely felt like they trusted Hundley, expected him to play well and believed in his success.

Not only did McCarthy seem to keep the training wheels on Hundley – or, since his feet were moving just fine, perhaps more aptly the kid gloves – handcuffing him with cautious and predictable playcalling, but also when Hundley did have chances to make plays as a passer, he was entirely ineffective. The combination of the coach’s conservatism and the quarterback’s struggles throwing the ball – as well as a defense that, once again, couldn’t stop the opponent at all in the second half – doomed the Packers on a day when they rushed for 181 yards, won the turnover battle and even blocked an extra point.

Indeed, if ever there was a game Green Bay should have won with a quarterback who wasn’t Rodgers, it was Sunday against the Saints at Lambeau Field. But without its two-time MVP quarterback, who is out indefinitely with a broken collarbone, the Packers just weren’t dynamic enough to score points on offense or get off the field on defense. Considering it was the first time in four seasons that Green Bay started the game with a quarterback other than Rodgers, the team actually played pretty well. But it certainly didn’t play well enough to beat a New Orleans opponent that’s now won four in a row. 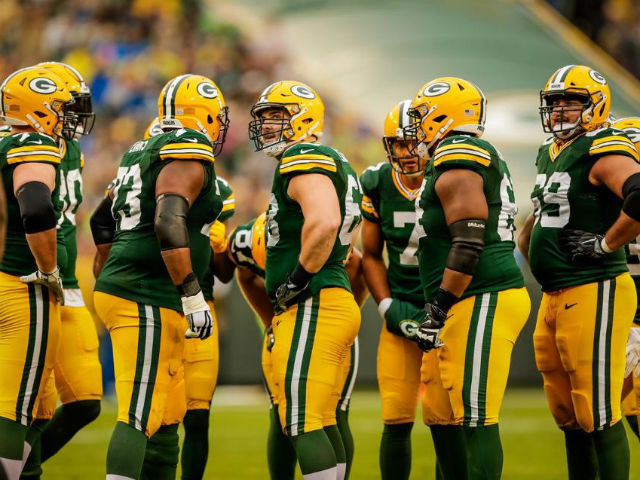 The word "confidence" was used more in the Packers’ locker room this week, in regard to Hundley, than "media" is uttered in the White House. But the third-year player completed just 12 of 25 passes for 87 yards, 3.48 yards per attempt, with one interception and zero touchdowns for a passer rating of 39.9. His top three receivers, Jordy Nelson, Davante Adams and Randall Cobb, combined for five catches for 40 yards, while Geronimo Allison added one for 14 yards, a missed assignment on a run play and a dropped ball, which didn’t help. Tight end Martellus Bennett led all pass-catchers with two receptions for 17 yards. Hundley never really found a rhythm, often rolling out of the pocket – and, it should be said, the pass protection Sunday was competent – and throwing the ball away.

McCarthy and the Packers game-planned to establish the running game, and they did, with rookie back Aaron Jones carrying 17 times for 131 yards and a 46-yard touchdown on the opening drive. And Hundley aided the ground game too, scrambling three times for 44 yards and a 14-yard score. But the rushing success didn’t help the Packers’ impotent passing game; Hundley completed just 4-of-10 passes for 32 yards on play-action, according to ESPN Stats & Info.

The last time Rodgers missed time due to injury, in 2013 when he broke the collarbone on his non-throwing arm, Green Bay went more than a month before its first victory without the future Hall of Famer. Despite going 2-4-1 with their backup quarterbacks, Rodgers came back late in that season and helped the Packers make the playoffs.

The most hopeful outlook this year for Rodgers, who underwent successful surgery during the week, has him potentially returning for Week 16 against the Vikings on Dec. 23. If that game is going to matter at all, Green Bay will need to find a way to be successful with Hundley and maximize his abilities. McCarthy and the Packers now have a bye week to try and figure it out.

Before we get too far ahead of ourselves, though, let’s look back at Green Bay’s Week 7 Week loss to the Saints.

Aaron Jones. He was it. That’s all there is to say. The fifth-round rookie out of Texas-El Paso, who carried 19 times for 125 yards two weeks ago in Dallas, was fantastic on Sunday, with 17 rushing attempts for 131 yards and a touchdown.

At 5-foot-9 and 208 pounds, Jones is shifty and quick, but he also possess tremendous vision, balance and patience, waiting behind the Packers’ blockers – who, again, were quite good as a unit against New Orleans; Bakhtiari and Bulaga both were instrumental in getting to the second level on Jones’ score – and then exploding through small holes for big plays. Besides the 46-yard score, Jones rushed for gains of 15 and 21 yards, finishing with a 7.7 yards-per-carry average. Going forward, the intuitive Jones has to be considered Green Bay’s No. 1 running back, supplanting Ty Montgomery, who had four carries for six yards and one catch for nine yards on Sunday. 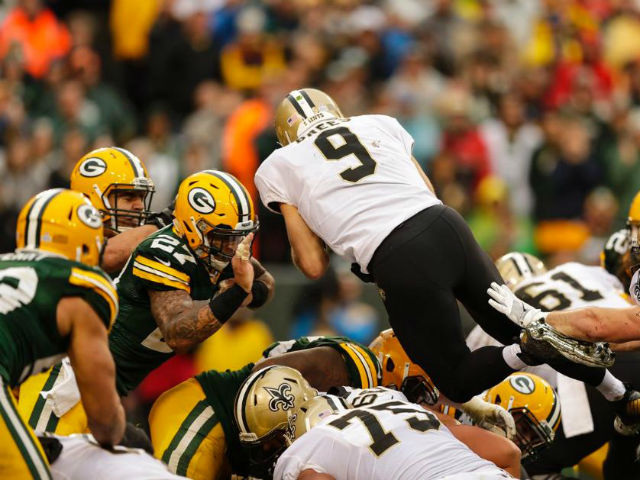 In his first career start, Hundley wasn’t good, and his numbers tell that story plainly. But on the other side of the ball, despite some big plays – two interceptions of future Hall of Famer Drew Brees, by cornerbacks Damarious Randall and Davon House; a blocked extra point by defensive tackle Kenny Clark – the defense was totally powerless in the second half.

On a defense that lives and dies on the big play – and, in Sunday’s case, died despite the big play – Blake Martinez is a steady, no-frills and sure-tackling presence. And the Packers sure need guys who can tackle.

The second-year inside linebacker finished with a game-high 16 tackles – more than twice the next-highest on the Packers – and often was the only player who seemed prepared and instinctive enough to be in position to make a stop. It was Martinez' fourth game this season with double-digit tackles

(Mike McCarthy isn't renowned for his play-calling, having fired and then rehired himself for that role in the past, but he does still call the plays. Here we rate his coaching performance, on a score from one to 10 McCarthy heads.)

Going into the game, but especially in comments afterward, it was clear McCarthy’s gameplan was to lean on the run game and limit Hundley’s passing exposure. They did that, but the head coach’s reluctance to open up the playbook in the fourth quarter – once Green Bay fell behind and needed a little juice to get its offense going – was disconcerting.

A microcosm: If ever there was a time to get creative and ambitious, to be truly confident in your quarterback – and a time that McCarthy’s lack of inventiveness was on display – it was on the Packers’ penultimate drive in the final quarter. New Orleans had just taken a 19-17 lead with a little more than 10 minutes remaining; Green Bay started with the ball at its own 10-yard line, and ran Jones left for three yards. With the ball already placed on the left hash marks, Jones ran again to the left – the short side of the field – and was forced out after losing two yards. Then, facing third-and-9, Hundley threw well short of the first down marker, connecting with Bennett for five yards. The Packers punted, the Saints took over with good field position and proceeded to score the clinching touchdown. Four heads.

"We don't have time. We've got to win games" – Randall Cobb on taking time to build chemistry with Brett Hundley

Hey, almost nobody got hurt! After weeks of starting offensive linemen hobbling off the field, of defensive backs limping to the sideline, of receivers being take away on a stretcher … the Packers got through Sunday pretty much unscathed. Safety Kentrell Brice and cornerback Davon House both went down with injuries, but both later returned. Linebacker Jake Ryan left the game with what the Packers called a migraine – not a concussion – and he did not return.

Green Bay came into the game Sunday with 14 players listed on its injury report, including four who were ruled out against the Saints, but goes into the bye without any new major medical issues to worry about (besides No. 12, of course).

We knew Hundley was going to have his ups and downs, and those of us who rag on McCarthy’s playcalling – read: most of Packer Nation – figured he'd be overly careful. But the failure of the defense – which has been coordinated by Dom Capers for eight years and has several high-profile players among its fairly well-established unit – continues to be a problem.

Game after game, Clay Matthews is mostly neutralized as a pass rusher; the secondary is often behind the play, with rookies like Kevin King and Josh Jones, as well as Randall, being opportunistic but also mistake-prone; the defensive line lost the line-of-scrimmage battle with the Saints, allowing bruising back Mark Ingram to rush for 105 yards and a touchdown on 22 carries. The situation around Hundley has to be nearly perfect for him to even remotely resemble Rodgers – and it was close on Sunday, with the running game's success, the turnovers, playing at home without a big deficit. The defense is accustomed to Rodgers covering up its mistakes; now, it has to be the reason the Packers win games, the way it was in 2010.

Mercifully, Green Bay is on a bye this week. The 4-3 Packers sit in second place in the NFC North division, one game back of the 5-2 Vikings, with the 3-3 Lions and 3-4 Bears not far behind. After their restful, and hopefully recuperative, week off, Green Bay returns to host Detroit at Lambeau Field Nov. 6 at 7:30 p.m. on Monday Night Football (ESPN).