Thankfully, while Sunday's Green Bay victory wasn't impressive by any stretch, there were plenty of impressive moments on and off the field. And here are nine of them - from sombreros to shoes and chugging suds.

Technically, the Green Bay Packers won on Sunday, beating Washington, 20-15, at Lambeau Field, scoring their 10th win of the season and getting ever so closer to returning to the playoffs for the first time since 2016. It sure didn't feel like it, though, as for the second straight week, the Packers scuffled their way to an uninspiring victory over an awful NFC East foe.

Would we much rather have this than what we had last season? Of course! Have Matt LaFleur and company totally outperformed all of our expectations for this year already? Without a doubt! Would it still be nice, just ONE TIME this season, to watch four quarters of quality consistent football from Green Bay? PLEASE GOD YES! At some point, the Packers will put together a complete game on both sides of the ball (let's not get crazy and include special teams for now), and my mind will fracture and break from the miraculous sight. But that day was not Sunday.

Thankfully, while the victory wasn't impressive by any stretch, there were plenty of impressive moments on and off the field. And here are nine of them – from sombreros to shoes and chugging suds.

1. What's better than one sombrero? 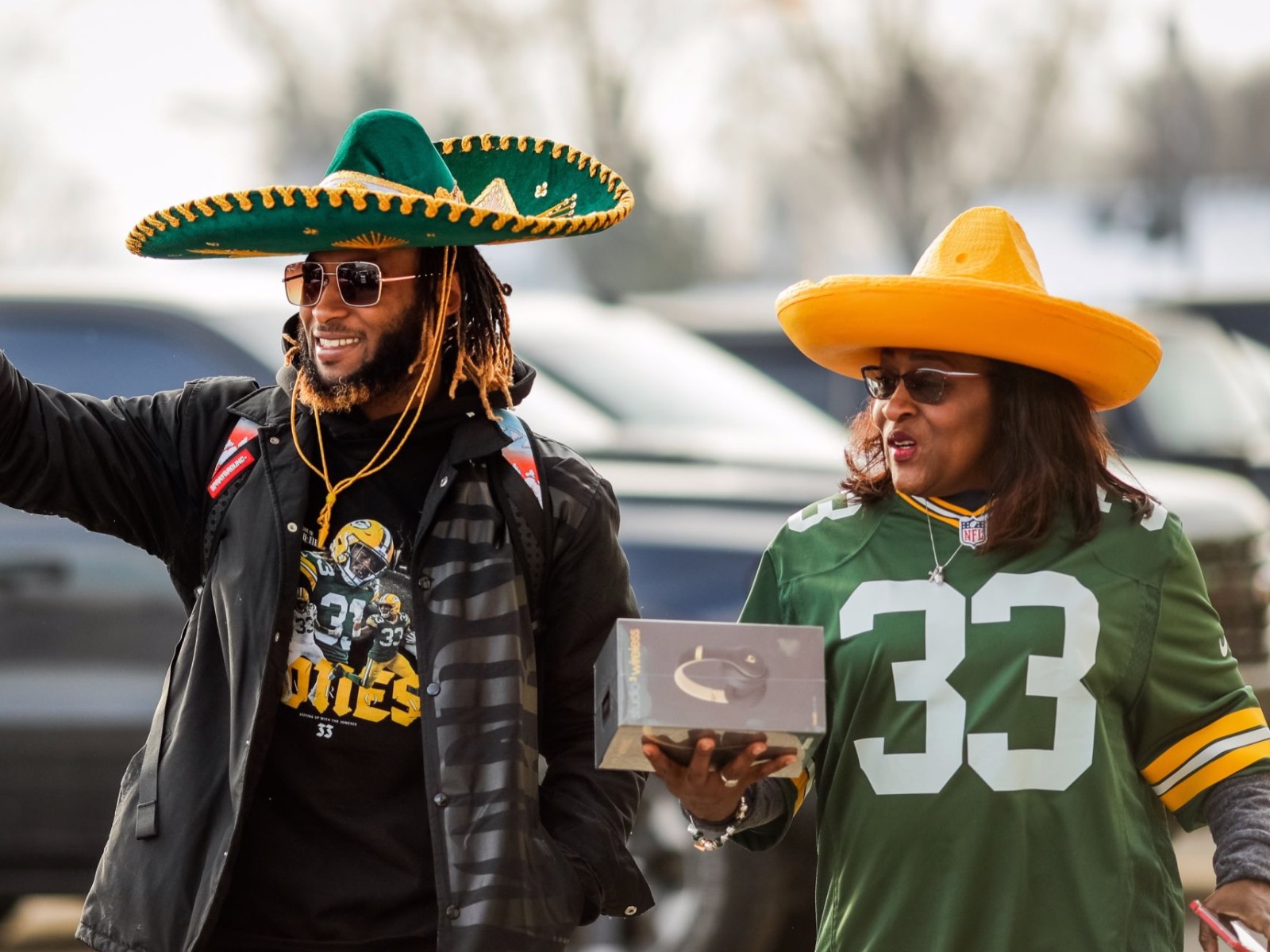 Two sombreros, of course! Packers star running back Aaron Jones arrived at Lambeau Field with his usual wide-brimmed sense of pregame spirit, but he was joined by another sombrero (a cheesehead one, at that) Sunday afternoon on his way into the stadium. And I think we can all agree that the bonus sombrero energy was exactly the push necessary for the Pack to earn the victory Sunday. It's basic sports science.

2. From Chile to chilly

This family traveled all the way from Chile to see the @packers play at @LambeauField 🙌#PackEverywhere 🌎 pic.twitter.com/yMtQqR75ie — Packers Everywhere (@packeverywhere) December 8, 2019

And you thought waking up early so you could drive up to Lambeau Field in time to tailgate and get into the stadium before kickoff was commitment. These fans came all the way from Chile to see the Pack score their tenth win of the season. Fun fact: Santiago, Chile had a high of 87 degrees on Sunday while Green Bay had a high of about 39 degrees – and during a Wisconsin winter, that qualifies as a NICE day. So yeah, these brave people are better, more dedicated fans than most of us.

I’m honored to be wearing these cleats to show my support for @northvalleycf Thank you, @theshoesurgeon for this one-of-a-kind masterpiece. @Bose #TeamBose #MyCauseMyCleats​

Did Sunday's game look a little more colorful and fashionable than usual? Then nice eye – yesterday marked the NFL's annual My Cause, My Cleats game, in which players are allowed to wear specially decorated cleats in honor of particular charities or causes close to their hearts. In the case of Aaron Rodgers, his cleats supported the North Valley Community Foundation and their ongoing work helping those misplaced or affected by the recent Camp Fire blaze. Mason Crosby, Adrian Amos, Oren Burks, Lucas Patrick and others also wore footwear with meaning behind the laces; for a closer look at the colorful designs and the causes they represent, check out this gallery.

Retired offensive linemen TJ Lang and Josh Sitton returned to Lambeau Field on Sunday for a final bow in front of the Packers faithful. Oh, and to pay their respects in the most Sconnie way humanly possible: chugging a beer on the field. I imagine the grounds crew had some STRONG WORDS for them on their way off the grass – and I also imagine Lang and Sitton gave exactly not one crap. 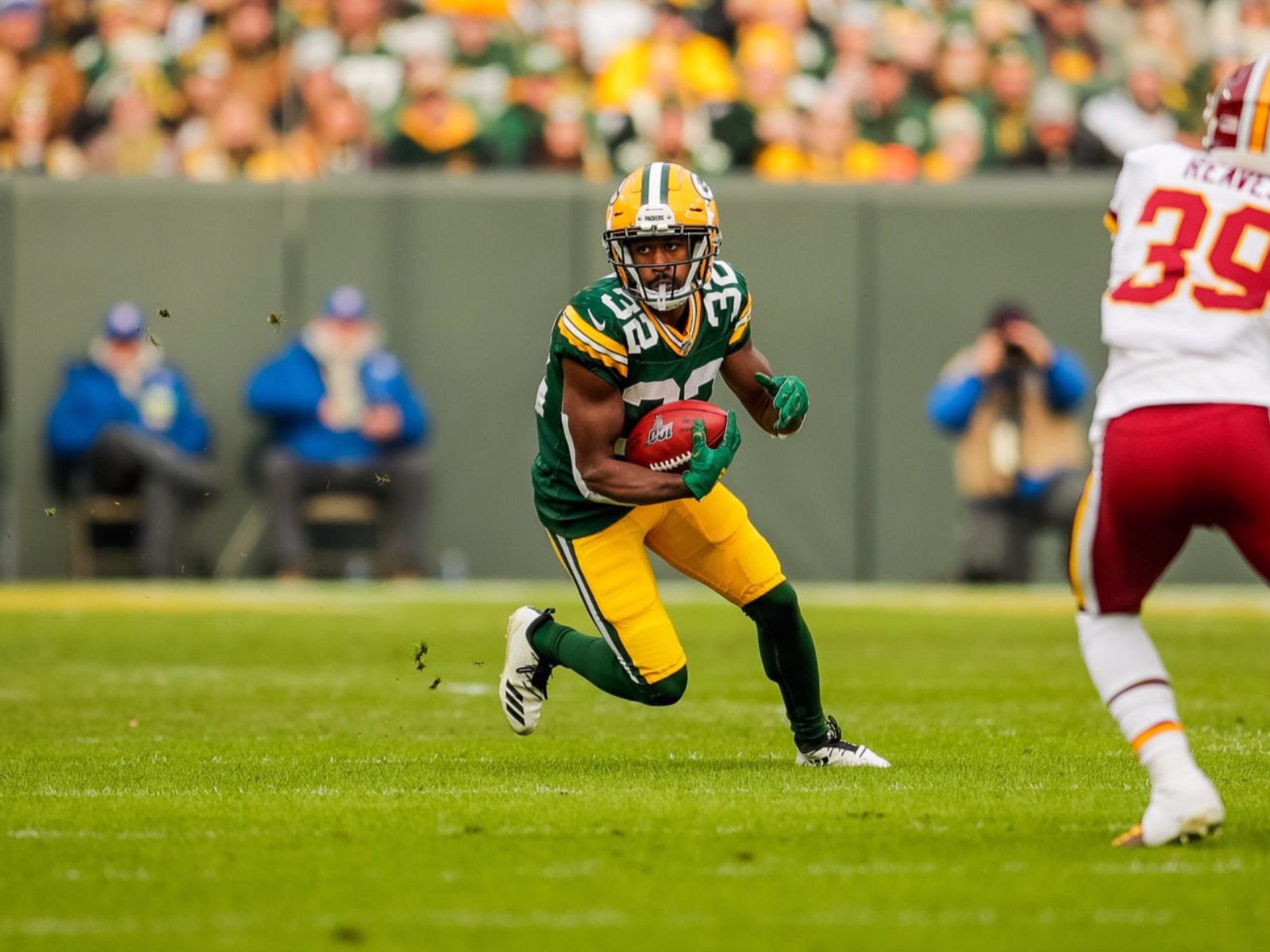 Hold on a second ... YOU CAN RETURN PUNTS!? FOR POSITIVE YARDAGE!?!?!? Indeed, after historic levels of ineptitude on special teams for most of the season, freshly signed Packer Tyler Ervin graced his new squad with a miraculous sight: the longest punt return of the year thus far ... an entire ten years, seven more than the season's previous record. The next punt return? TWELVE WHOLE YARDS! CAN YOU EVEN DO THAT!? By the end of the game, Ervin returned four punts for a total of 51 yards, finally nudging Green Bay onto the positive side of the ledger when it comes to punt return yardage on the season.

In conclusion, I'm not saying that Ervin's basically the second coming of Desmond Howard ... but yes, actually, that's exactly what I'm saying. 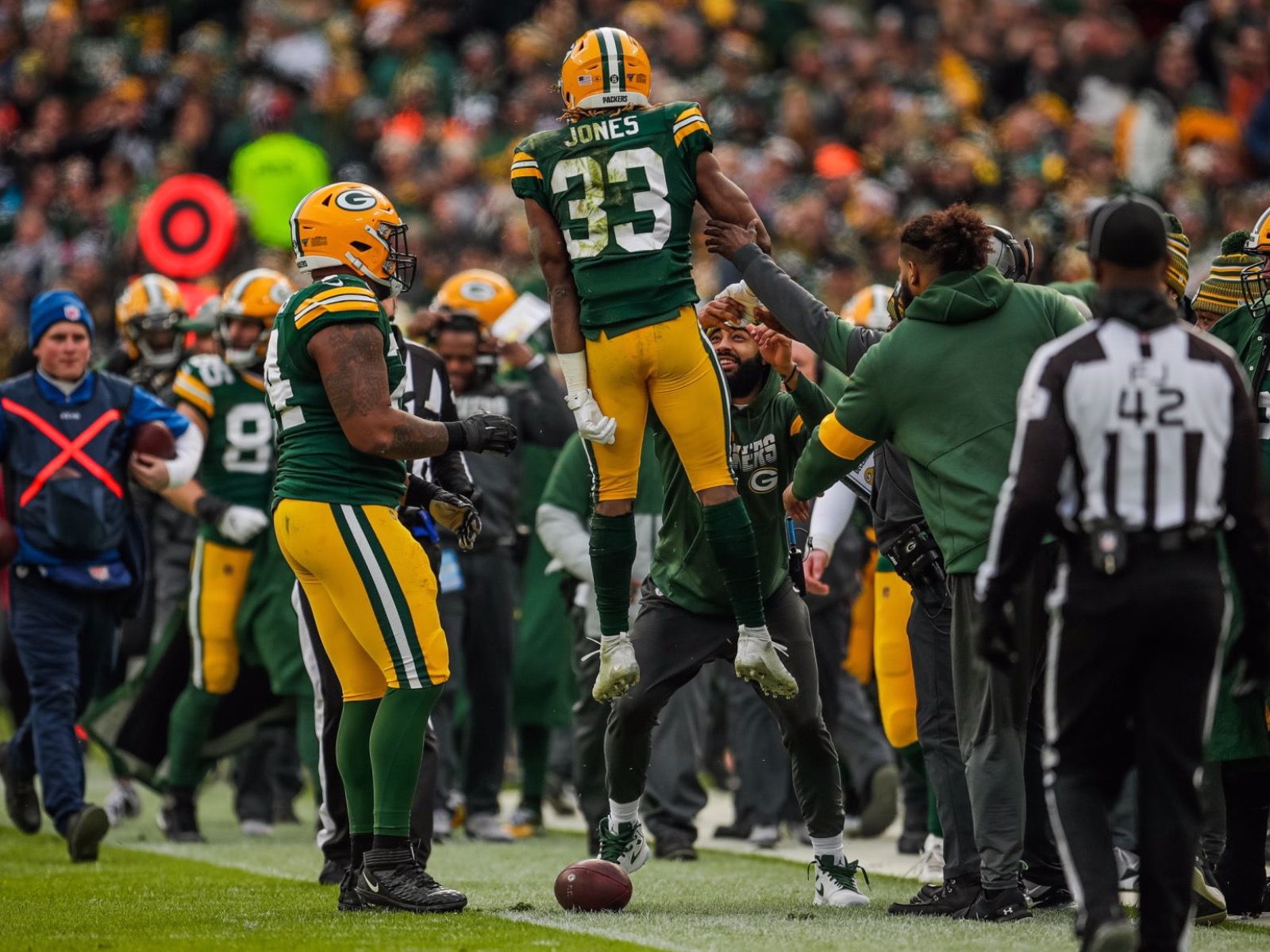 The only thing I like more than this photo of Aaron Jones seemingly being raptured and floating off into heaven? Aaron Jones' day at the office for the Packers. The standout running back notched another impressive box score, racking up 134 rushing yards (plus a touchdown) on just 16 carries as well as leading the team on the receiving side with six catches for 58 yards. I hope this dude never comes back down to earth (and that I never have to face him again in fantasy football this season).

7. A Sunday not-so-fun day for Haskins 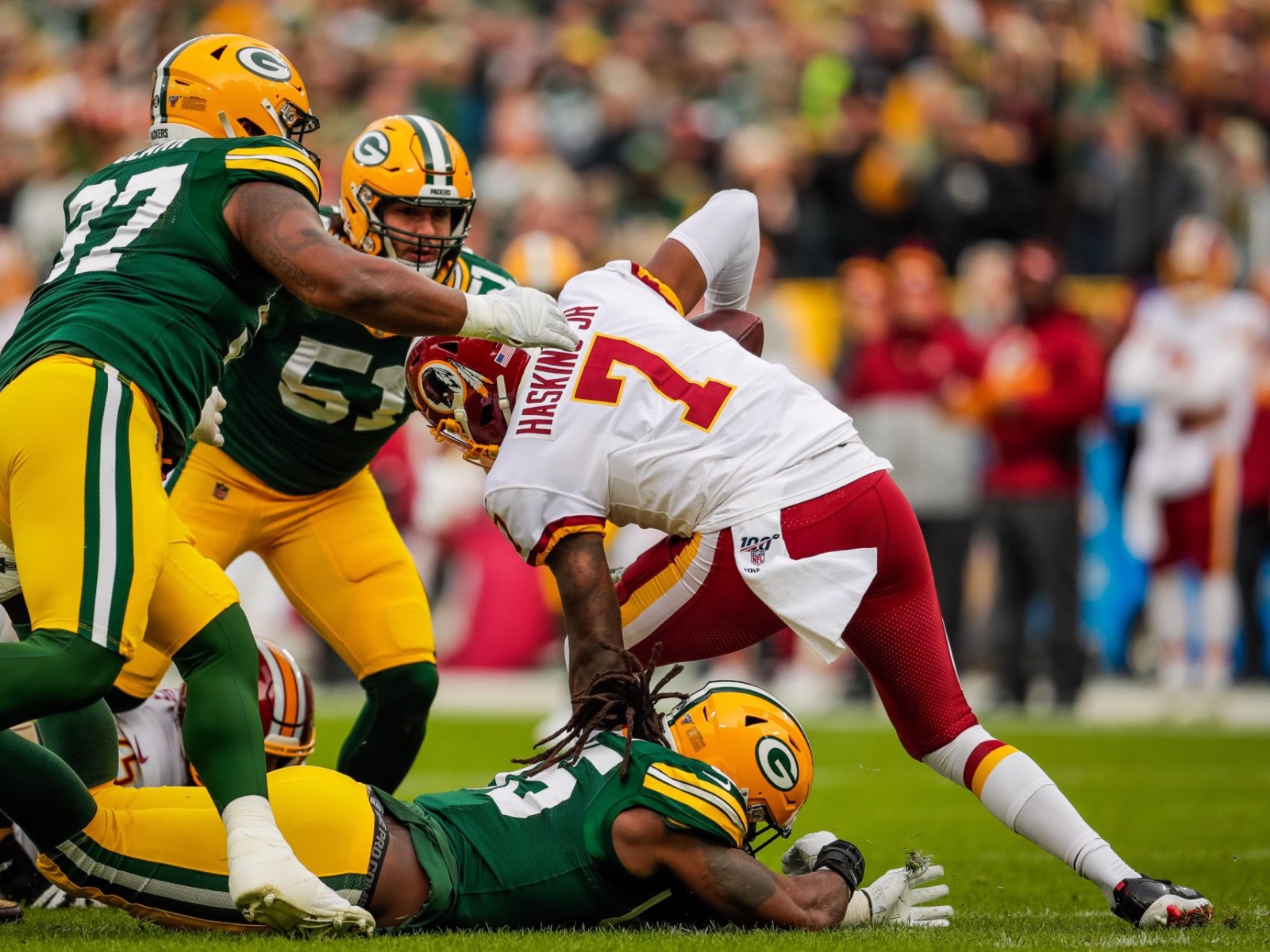 Quick question for Washington: Why was Dwayne Haskins still in this football game? The rookie quarterback was clearly hobbled for the second half of the game, painfully trotting around the field with what appeared to be a significantly injured ankle. This guy, your most recent first-round draft pick, is the potential future of your team, a player who wasn't even supposed to play this season and instead learn behind veterans – and you elect to keep him in a meaningless late-season game in which he's not even playing particularly great and the offensive line is giving him little support while he's gingerly walking down the field as if his foot could fall off at any moment merely due to the force of gravity, much less a hit from a 300-pound charging grown man? I mean, I guess thanks because it sure made the Packers' lives easier on Sunday playing 50 percent of a quarterback. But Washington, I will never understand you.

8. Credit where credit is due

If you're wondering why I'm posting a Washington highlight, well, frankly it's because there's not a ton of Green Bay ones to choose from. The Packers, especially on offense for 75 percent of the game, were uninspired, and the defense was more suffocating than spectacular to watch – a credit partly to the hobbled Haskins and their generally talent-low opponent as well.

But also, I'm posting this highlight because ... come on, this catch is kind of amazing, right!? When you spend an afternoon watching a team slowly and sloppily bleed out a bad 3-9 opponent, you gotta find joy where you can. Speaking of which ...

9. At least somebody's having fun

Here's a weird fact: WE WON YESTERDAY! Despite looking very sleepy against a bad football team (Hey *pokes Green Bay's offense with a stick* do something), the Packers came away with yet another win on the season – and last we checked, you don't get more wins for style points. All that matters is making the playoffs, and though it may not look pretty, the Packers are putting themselves in a great position to do exactly that. So indeed, Jamaal Williams: Go Pack Go. And now on to next week and the Chicago Bears, who suddenly think they're a respectable football team again. We should be able to fix that.