For a fan base as devotedly diehard as the Packers', it's been an unexpectedly wild start to NFL free agency, marked by a frenzy of player moves made in the first 96 hours. Whatever your opinion on the decisions, it's hard to argue Ted Thompson has been sitting out this offseason.

For a fan base as devotedly diehard but accustomed to offseason inaction as the Packers’, it’s been an unexpectedly wild start to NFL free agency, which only began March 9 and has already featured a frenzy of player moves made in the first 96 hours.

All of that happened in three days. Meanwhile, the Packers let linebacker Julius Peppers walk, as running back Eddie Lacy, special teams ace Jayrone Elliott and defensive end Datone Jones are talking to other organizations.

Whatever your opinion on the decisions' prudence, it’s hard to argue that polarizing general manager Ted Thompson has been hewing to his annual tradition of essentially just sitting out free agency. The understated 64-year-old personnel man has been, uncharacteristically, a lot more active – or inactive, depending on how you feel about Thompson not retaining some of his own players – this offseason. Might that be a response to Aaron Rodgers’ year-end entreaty that the Packers "reload" the roster and go "all-in"?

Indeed, it was a head-turning, up-and-down first few days. The biggest news was made Sunday, when Lang agreed to a three-year contract with the Lions. The move prompted a double-take from many insiders around the league – the dependable veteran had been a linchpin of the offensive line and repeatedly expressed his desire to stay in Green Bay – and provoked questions among fans about Thompson’s management, Lang’s potential replacement and the doomsday demise of the Packers’ offense, as well as perhaps even life worth living.

Lang had spent his eight-year career with Green Bay and last season, at age 29, he made his first Pro Bowl. He was considered one of the top free-agent offensive linemen on the market and has been extremely durable in his career, appearing in 119 of a possible 128 games. He played through a broken foot in 2016 and then underwent hip surgery after the season, but his increasing injuries may have concerned the Packers. 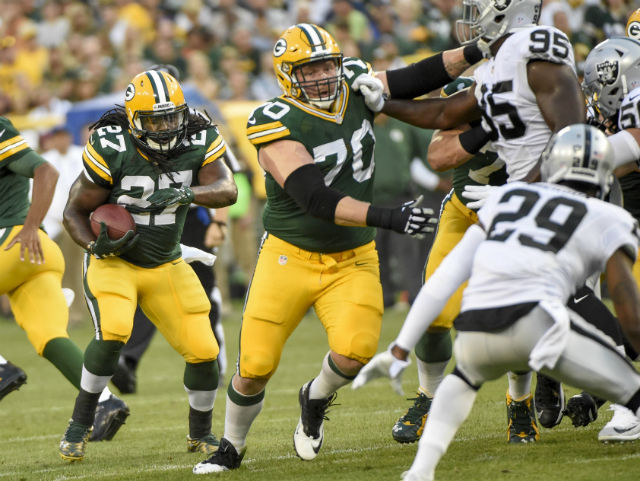 Last year, Lang became the most senior member of the line after Green Bay released All-Pro left guard Josh Sitton just before the season started. Apparently, Thompson doesn’t believe in paying a premium at the offensive guard position, because he could have negotiated agreeably with Lang, who was coming off a four-year, $20.8 million contract extension.

When the Packers cut Sitton, which was a hugely surprising move at the time, they believed backup Lane Taylor was ready to take over. Taylor had made a couple of starts the year before and, ultimately, he proved the Packers correct with a solid 2016 season. Behind Lang, though, there is no such player, no clear-cut option in waiting.

Barclay returned to Green Bay on a reported one-year, $1.3 million deal, but he’s a jack-of-all-trades, master-of-none utility man who’s valued for his versatility and doesn’t really offer much upside as a starter. Jason Spriggs was a second-round pick last year whom the Packers like, but at 6-foot-6 and 301 pounds, his natural position is at tackle.

There are also second-year guards Kyle Murphy and Lucas Patrick on the roster, but either would represent a significant drop-off as a starter. Bryan Bulaga had his best season at right tackle last season and is unlikely to move inside.

While they could sign a free agent, the NFL Draft is the Packers’ best bet for landing a successor to Lang. Thompson has proven adept at unearthing offensive-line talent – we’re purging our memory of Derek Sherrod – and especially in later rounds.

Could the Packers find another diamond in the rough, an overlooked titan in the trenches? At this point, Barclay is probably No. 1 on the depth chart at right guard, but it’s hard to envision him there in August.

During an interview Monday on a Detroit radio station, Lang said signing with the Lions "was a business decision" and Green Bay "made it easy on him" to leave.

Thompson may have opened up the Packers pocketbook for Perry’s five-year, $59 million contract – though it’s essentially a year-to-year deal, with the only guaranteed money the $18.5 million signing bonus, which makes it friendlier to the team.

But his other decisions, especially letting Lang and Hyde walk and choosing Bennett and Kendricks over Cook – despite Lang and Hyde seeming invaluable at their positions and Rodgers publicly stumping for Cook – indicate that Thompson still prefers a young bargain over an older asset.

Now, what will become of Lacy, Elliott and Jones? What of long-snapper Brett Goode and Green Bay’s restricted free agents? Will they address the deplorable defensive backfield, further depleted by the loss of Hyde, and how much can the draft help the current squad?

After the Packers’ emotional rollercoaster ride of a 2016 season ended with the NFC Championship Game loss to the Falcons, Rodgers made a public appeal to the front office. "I don’t think we need to rebuild. We need to reload," he said. "We've just got to make sure we're going all-in every year to win. And I think we can take a big step this offseason."

The Packers have taken a lot of steps already in the offseason – absolutely more than they usually do this time of year – but it’s hard to tell if those steps have been big or small, and if they're going forward, backward or merely in place.

Welp: 9 key images from the Packers' successful 37-30 loss to the Lions