Full speed ahead: Much faster offense could be Packers' best since 2011

After a bad, slow season, the Packers' 2016 offense should be much improved - possibly the best it's been since 2011. Why? Because speed. Speed all over the place again.

Back in August of 2011, fresh off winning the Super Bowl and before they began a regular season in which they’d roll out a historically prolific offense and finish with a 15-1 record, the Packers were already feeling pretty good about their ability to score points.

And, as was customary at the time, Jermichael Finley was the player best (or perhaps worst, depending on your perspective) suited to speak to that confidence. After a practice during training camp, the former tight end was characteristically brash about his expectations for the year.

"Put it like this: We should score every time we get the ball," Finley said in the locker room at the time. "So you add that up … I think we’ve got the deadliest offense in the league."

He was right. What it added up to was an NFL-high 560 total points, good for a league-leading 35.0 per game, and franchise records for total offense (6,482) passing yards (4,924) and touchdowns (70). With eventual MVP Aaron Rodgers at quarterback and half a dozen talented pass-catchers running all over the field, Green Bay was almost literally unstoppable, just as Finley had predicted, with the only offensive brakes applied when the team’s leads were so large that competitive courtesy compelled it to stop scoring.

As good as Rodgers and the Packers have been since then – four straight playoff appearances, three NFC North division titles, another MVP trophy for the quarterback – they haven’t again approached the prodigious production of that group.

What stands out to me about that team more than four years later – I covered the Packers then as a beat reporter for a different outlet – is not only the sheer number of weapons the offense had, but also the speed at which it played. In 2011, Mike McCarthy’s no-huddle attack was still relatively new, and with the surgically precise Rodgers at the controls, opponents were totally unprepared to scheme against, stop or even slow it.

The Packers ran 984 plays that year, an average of 61.5 per game, which is well below the 75 for which McCarthy strives and also lower than the total number of plays they ran in any of the subsequent four seasons. While the theoretical aim of the no-huddle offense is to run more plays – to be up-tempo, as McCarthy says – Green Bay’s hyper efficiency and big-play frequency meant they were actually taking far fewer snaps than usual.

The team figuratively just sprinted past its opponents every game.

Around Rodgers, that 2011 team’s offense was lightning fast and explosive. Outside of Finley, a seam-splitting attention-grabber up the middle, Jordy Nelson, Greg Jennings and James Jones were all dangerous downfield threats (13 receptions of at least 40 yards between them), with veteran Donald Driver and rookie Randall Cobb operating adeptly underneath from the slots. In the backfield, James Starks and Ryan Grant were elusive off-tackle runners who were both also capable receivers.

There was speed all over the field. Everyone was a potential game-breaker. 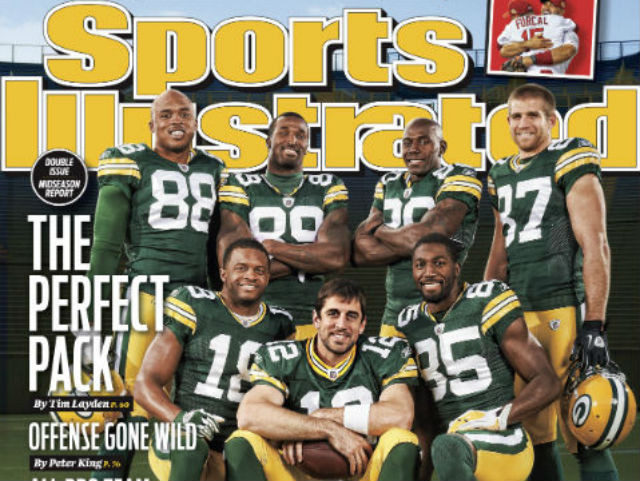 There hasn’t been just one factor that’s contributed to the offense’s decline since then, of course. Injuries, player departures and personnel changes, the rest of the league more or less figuring out how to defend the Packers (cough, double-high safety, cough), as well as many other reasons.

But clearly, by anecdotal and statistical evidence, the 2015 Packers offense was the worst it’s been in a while. Last season produced Green Bay's lowest points per game, yards per game, yards per play and third-down percentage since Rodgers became the starter in 2008. Whether you were watching with your eyes as plodding pass-catchers couldn’t get open or listening with your ears as Rodgers made veiled reference weekly to receivers needing to win their one-on-one matchups, you no doubt were saying with your mouth something like, "The offense really sucks."

With this week’s free-agency signing of tight end Jared Cook, who's a quantitatively better version of Finley, plus a few other positive developments, the Packers’ 2016 attack should be much improved – possibly the best since 2011.

Why? Because speed. Speed all across the offense again.

Cook ran a 4.50 40-yard dash in 2009 and is considered one of the most athletic tight ends in the NFL. He’ll likely play with incumbent Richard Rodgers in the two-tight end sets McCarthy loves, but, as a sound blocker and good receiver, he could also become the starter at the position. Cook is even faster than Finley was and should create coverage problems up the middle, where Rodgers’ pinpoint passes will be a welcome improvement over the throws Cook received in St. Louis.

On the outside, the Packers welcome back one of the best wide receivers in football. Jordy Nelson, who missed all of last season with a torn ACL, has become an elite deep threat – from 2010 through 2014, he tied for the third-most receptions of at least 25 yards in the league, according to STATS, Inc. – and his rapport with Rodgers cannot be replicated. Nelson’s mere presence is invaluable to the Packers’ passing offense, and the return of the No. 1 receiver will have a beneficial domino effect on the rest of the group.

Then there are two young receivers who didn’t do much last year but could have huge roles this season. Dynamic Ty Montgomery, a 2015 third-round draft pick who was limited to six games in his rookie campaign because of injuries, and popular Jeff Janis, a seventh-rounder in 2014 who barely played until bursting onto the scene with seven catches for 145 yards in the playoff loss to Arizona. Montgomery is more quick than fast and very strong; Janis, nicknamed "V12," can flat-out fly. Both should be better able to get open than James Jones (a free agent) or Davante Adams (a mixed bag), and both could dramatically increase the Packers’ offensive tempo.

While we're on the subject of wideouts, don't forget about Cobb, the crafty and nimble slot man who was out of his depth as Green Bay’s No. 1 receiver, often getting the defense’s best cornerback or being double-teamed. Nelson being back will have a major impact on Cobb, who’s excellent at working in smaller space inside and beating single coverage, and it should herald a return to a 14-yards-per-catch average.

And in the backfield, Eddie Lacy, who was fat (around 250 pounds) and underproductive (758 rushing yards) last season, is apparently now skinny. If that slender figure produces a spryer, more agile Lacy, the offense could have the effective ground game needed to balance the aerial attack defenses were able to concentrate on and control in 2015.

Since his first training camp as a second-round rookie in 2013, Lacy has battled weight issues; even during his good seasons, he’s been about 235 pounds. Would a Lacy in the greatest, or at least lightest, shape of his life be the best version of the running back we’ve ever seen?

Running back James Starks was re-signed to a two-year contract a couple weeks ago and, when not fumbling, he's a swift change-of-pace back and an above-average receiver. Among the other skill position players who will likely be back in 2016, Adams has been inconsistent, oft-injured Jared Abbrederis is unproven and Justin Perillo, Kennard Backman and Aaron Ripkowski are presumably nonfactors.

Coming off their worst offensive season since Rodgers became quarterback, the Packers should be much faster, and better, in 2016. Adding Nelson, Montgomery and Janis at wideout, Cook at tight end and skinny Lacy in the backfield – there’s wheels at every position. Even the offensive line ought to have more speed than that 2011 group, which used Chad Clifton and Marshall Newhouse at left tackle and had Scott Wells at center. The current iteration replaces those players with David Bakhtiari and Corey Linsley, who are younger and more mobile.

The statistics Green Bay put up in 2011 were historic and extraordinary; it’s possible the franchise never reproduces them. But considering the team nearly made it to the NFC Championship Game with a comparatively bad and slow offense, just seeing Packers receivers get open and their running back’s gut not hanging over his pants – plus a new tight end that might just be the difference maker – could mean even greater success and the renewed confidence of expecting to score every time they get the ball.