Healthy, confident Abbrederis ready for big role in biggest game of his life

After missing last year and the beginning of this season with injuries, former Badgers star receiver Jared Abbrederis is preparing to play a big part in Green Bay's playoff game against Arizona on Saturday.

GREEN BAY – If the moment is too big or the stakes too high for the hometown guy who grew up fantasizing about exactly this, Jared Abbrederis doesn’t show it.

Sitting in his stall at the far end of the Packers’ elliptic locker room, hands folded in his lap above the right knee with the long scar that signifies stolen time, preternaturally calm amid the uncommon commotion around him, the second-year wide receiver fields question after question about his health, confidence, excitement and chemistry with the quarterback.

And making earnest eye contact with every reporter, speaking straightforwardly, Abbrederis confirms he is, indeed, all of those things and in sync with Aaron Rodgers.

"It was a rough stretch there, a couple of unfortunate injuries that happened, but that’s football, so you’ve just got to move on and it’s been good to be out there playing," Abbrederis said. "Obviously, the more time you have, the more confident you get, and the more confidence (Rodgers) has in you.

"Like I always say, trust is hard to earn, but it’s easy to lose, so you’ve got to make sure you keep improving each day and aren’t making mistakes. But if you make a mistake, correct it and don’t make the same mistake twice."

In last week’s Wild Card win against Washington, Abbrederis did make a mistake: a dropped screen pass in the first quarter. But he corrected it, came back and had two catches for 14 yards, plus an impressive two-point conversion reception while playing a career-high 28 snaps.

Coming off arguably his best game with the Packers, Abbrederis is now heading into what is incontrovertibly his biggest – Green Bay’s Divisional Round playoff matchup with the Cardinals. He said he’s preparing for it just like he would any other week, even though the guy with just nine NFL receptions is expected to suddenly be the team’s No. 3 wide receiver Saturday night. And, despite saying the word "mistake" seven times in five minutes, Abbrederis isn’t concerned with pressure, slip-ups or doubters on the outside.

Who, exactly, might be naysaying Abbrederis isn’t clear, and perhaps it’s constructed negativity that is purely motivational. After all, the 25-year-old is one of the most beloved Packers simply by nature of his background. Born and raised less than 90 miles from Green Bay, in tiny Wautoma, Abbrederis’ story from Wisconsin walk-on to collegiate standout is well known. After leaving school tied for the Badgers’ all-time receptions record, the professional team he rooted for as a kid drafted him in the fifth round in 2014, and Abbrederis called it a dream come true.

Of course, for more than a year, it was a dream deferred. Abbrederis missed all of his rookie campaign with a torn ACL that required surgery and was sidelined early in 2015 with a concussion and then a rib injury. But he said he learned a lot while sitting out and watching his teammates, as painful as it was.

This season, he played 10 games, showing promise in performances against the Lions (four catches for 57 yards) and Raiders (three for 33). And now, with wide receiver Davante Adams likely out this week due to a knee sprain, Abbrederis has a chance to live out the most fanciful football fairytale from his childhood: helping the Packers toward the Super Bowl.

"Obviously it’s every kid’s dream, especially for a Wisconsin kid growing up, everybody wants to play in the NFL," said Abbrederis, wearing a gray, long-sleeved Badgers shirt. "And I feel like every little boy wants to play for their home team, so this is awesome." 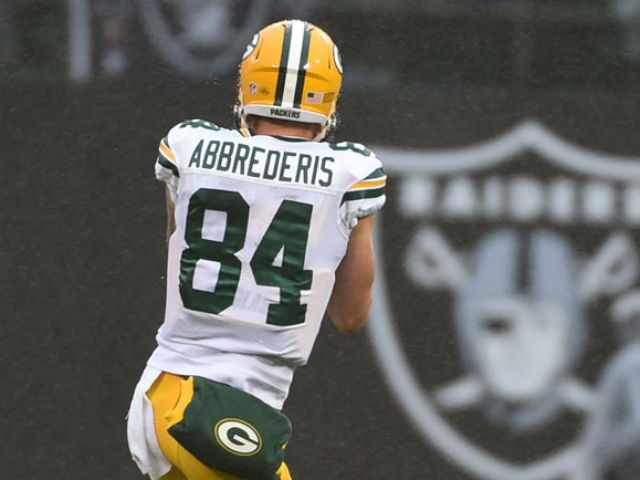 Considered a sure-handed receiver that runs crisp, smooth routes, Abbrederis said he’s worked hard to make sure he’s always in the right spot at the right time. In the process, he’s gained the hard-to-win trust of Rodgers, who’s spent all season searching for playmakers that can get open down the field and replace or at least resemble Jordy Nelson.

A few weeks after he declared that the little-used wideout deserved more playing time, Rodgers on Wednesday reiterated his support for Abbrederis, saying he’s showed enough to take on an expanded role in the offense.

"I think Jared’s done a good job for us when given opportunities," Rodgers said. "You look at the tape, and he’s open a lot of times even when the ball doesn’t go his way. So we’ve got to find ways to put him in position to do what he does best and find a way to get him the ball."

Head coach Mike McCarthy, the man who decides who gets to be on the field and which plays are called, echoed those sentiments this week.

"He’s doing a lot of good things, particularly the work and his two-point play was something that was practiced," McCarthy said of Abbrederis beating a Washington cornerback on a quick slant last week. "It’s nice when you get the defense and the mechanics of protection, and he just ran a great route."

Abbrederis said Rodgers’ praise "means a lot" and gives him even more confidence in himself. He said the receivers have been rotating in practice just like they always do, so he hasn’t had any notably increased involvement this week. As always, he’s just trying to avoid – or perhaps amend – mistakes and "get better each day."

Healthy, confident and trusted by his quarterback, Abbrederis isn’t daunted by the prospect of living out his dream and playing in the biggest game of his life Saturday night in Arizona.

"I got playoff experience; I got last week," he said with a laugh. "It’s another game. I mean, it’s a big game, obviously. I played in some big games in college, but it’s different – this is the NFL, it’s the best of the best.

"But it’s another game; you can’t make it bigger than what it is. Go out there, have fun, make plays and you’re going to have mistakes here and there – I mean, obviously, you don’t want to have one in the game, but if you have one, just move on and do your job."