Packers' best was better than Patriots'

The Green Bay Packers edged the New England Patriots, 26-21, Sunday afternoon at Lambeau Field in what many called a Super Bowl preview. If that was the case, then the Packers' best beat the best the Pats had to offer, especially their top cover corners.

GREEN BAY – The hooded one, seemingly devoid of emotion and all things that make humans identifiable as living, breathing creatures, blinked first.

It was a group effort, for sure, but rookie wide receiver Davante Adams should get a lot of credit for the Green Bay Packers’ 26-21 victory over the New England Patriots.

Not long after I tweeted this …

... did Bill Belichick, the Emperor Palpatine of the NFL, do exactly that.

The Patriots head coach began the game with Darrelle Revis singled on Randall Cobb and Brandon Browner on Jordy Nelson. So, Rodgers looked to No. 3 wide receiver Davante Adams in the first quarter, who continually beat Logan Ryan. There were misfires early, but Rodgers and Adams connected enough – three times for 90 yards on six targets – to force Belichick’s hand.

He moved Revis to Nelson and Browner on Adams in the second quarter, which left Kyle Arrington and Devin McCourty to chase around Cobb. If they couldn’t handle Adams, they weren’t going to hold down Cobb, who caught four passes for 55 yards to set up a Mason Crosby field goal that made it 16-7 Packers.

"I don’t knock ‘em for it," said Adams. "They’re going to do what they gotta do to try and stop us."

Then, at the end of the first half, Nelson did get the best of Revis on a slant for a 45-yard touchdown with 23 seconds remaining to make it 23-14 Packers. Nelson had been held without a catch the entire first half before that final drive.

"What Davante did early, they had to change it up a little bit," Nelson said.

On the coaching side, to combat the one-on-one matchup problems presented for Cobb with Revis, McCarthy moved him into the backfield to create favorable mismatches – like Cobb on a wheel route beating linebacker Rob Ninkovich easily for 33 yards.

"That was something that we were wondering how they were going to play it," Cobb said of those formations. "We got a good feel for it in the first half and to be able to see those matchups and create matchups and make it a little easier for us."

The Packers offense has struggled this year when Nelson and Cobb haven’t gotten open, and the Patriots presented a unique problem for the offense in that Browner and Revis could cover them without much help. But with Adams playing well, and the tight ends doing just enough (4 catches, 52 yards, TD), it forced an adjustment that ultimately worked in the Packers’ favor.

"We talked this week about making the most of your opportunities and the fact that they’re a matchup team," Rodgers said. "So we needed to win those matchups up front and then obviously on the perimeter, so we challenged those guys before the game to win those matchups and Davante did a great job."

Patriots tight end Rob Gronkowski is listed at 6-foot, 6-inches and 265 pounds. Packers safety Ha Ha Clinton Dix? Six-foot, 1-inch, 208 pounds. Clinton-Dix had already tried to bring "Gronk" down high earlier in the game, and quickly realized the folly in such an endeavor. But he wanted to remain a physical presence throughout the game, let him – and Tom Brady – know he was there.

And, for the most part, Clinton-Dix and his teammates in the defensive backfield held their own. Gronkowski had seven catches for a quiet 98 yards, but more importantly, no touchdowns for 56 minutes and 29 seconds of the game.

"Most definitely," he said with a sheepish smile. "I’m the rookie. I’m the youngest one of the pack, so I knew they were going to try to challenge me and I was up for it."

The ball found Gronkowski’s hands in the end zone, but Clinton-Dix made sure to keep his hands on the big tight end as well – and he eventually wrestled the ball out.

"It couldn’t get any better," Burnett said of Clinton-Dix’s effort. "He didn’t give up. He kept fighting for it, and boom, knocked the ball up. That’s a thing of beauty."

"I am pretty sure I caught it, but at the last second the defensive back made a nice play and hit it out of my hands," Gronkowski said. "It was a good play by him. When my number is called, I have to come down with that play."

Clinton-Dix and the Packers defense had made the plays to win a game.

"(Julius Peppers) always talks about it in meetings and before practice, he says he wants the defense to go out and close a game for once and I think we did that tonight," Clinton-Dix said. 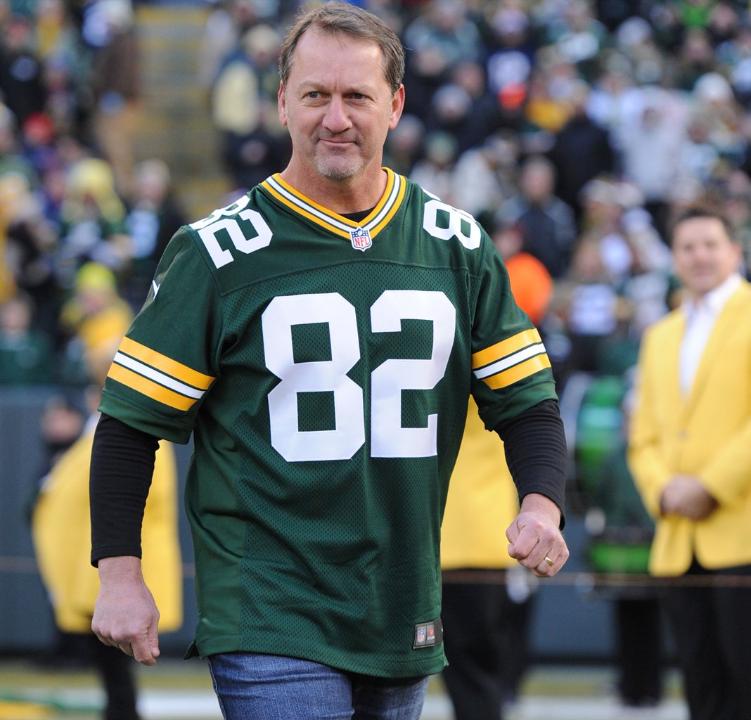 Don Beebe was introduced during the pregame festivities as the team honors it’s alumni before every home game, so I dropped the former Packers wide receiver a text – I haven’t seen him since coming to OnMilwaukee.com in the March of 2012 and wanted a chance to catch up.

I got to know Beebe not as an NFL player, but as a head coach with Aurora Christian, a private school in Aurora, Ill. I covered Beebe’s Eagles football team – he was their volunteer head coach – for several years, including two seasons in which he ran an offense that set state records (in 2008) and eventually won back-to-back state titles (2011, 2012).
We spoke right when I moved here for a "Milwaukee Talks" interview, and again a few months later when his biography was published.

Well, Sunday presented that opportunity to catch up in person as he was at Lambeau for the first time in around seven years. His son Chad, now a wide receiver at Northern Illinois University, was with him, too.

As we chatted outside the alumni box, I found out Beebe is done coaching, at least for now, as his life story is headed to either the silver screen or a television network. It was funny though, because as we talked, Nelson had broken away for his 45-yard touchdown catch and run before the end of the half.

Both Beebe’s – both wide receivers – wanted to see the replay to see what kind of route he had run, and how McCarthy had moved him around for a better matchup. Once a receiver, always a receiver.