The Green Bay Packers dismantled the Minnesota Vikings 42-10Thursday night at Lambeau Field, putting together their most complete game of the year. The defense toyed with third string quarterback Christian Ponder and Eddie Lacy finally got untracked offensively as the Packers improved to 3-2 on the year.

Such was the case Thursday night at Lambeau Field, as the Green Bay Packers blew out the Minnesota Vikings 42-10  behind the play of the league's 26th-ranked defensive unit that produced a multiple-turnover game for the third straight week, leading to 14 points off those takeaways – including a 49-yard interception return for a score by linebacker Julius Peppers.

The defense also held Minnesota running back Matt Asiata in check, forcing Vikings quarterback Christian Ponder to make plays to sustain drives – which only fed into the Packers’ hands.

Green Bay registered three sacks, picked off two passes and forced five punts and recovered a  fumble in the first half alone, which afforded Aaron Rodgers and the offense excellent field position – five drives started at their own 33-yard line or better – and led to three scores.

"It definitely helped out a lot," running back Eddie Lacy said of the defense's play. "Those guys, they came out (and) they played a great game. Coming off of a good game last week with all of the turnovers they pretty much picked up where they left off. It gave us a spark. We have a short field, whether it’s because they got a turnover or because of the field position after the punt, and it gets us ready, like yo, we have great field position, let’s see if we can get it in."

Even on a rainy night, Rodgers was able to connect with Randall Cobb (8 yards), Jordy Nelson (66 yards) and rookie Davante Adams (11 yards) for quick-strike touchdowns on short fields, and the Packers essentially put the game away in the first half by taking a 28-0 lead.

The running game got on track, too, as Lacy set up the Packers’ opening score to Cobb in the first quarter by rushing for 53 yards on three carries – which was a season high for yards in a game – setting up an easy pitch and catch between Rodgers and his receiver.

Lacy would rush for 59 yards in the half – and James Starks adding an additional 10 – and such early effectiveness allowed Rodgers to run play action deep to Nelson on the Packers’ third possession of the half.

In the second quarter, the Packers defense ended the four full Vikings possessions that quarter with a punt, Peppers’ interception, a Jamari Lattimore interception that set up Rodgers’ touchdown pass to Adams, and an Asiata fumble that Morgan Burnett forced and Casey Hayward recovered.

"Obviously everything rolled together pretty good at the beginning of the game," Nelson said. "Watching Peppers run that thing was awesome and Jamari getting the pick right after that and setting us up, so we were able to feed off each other, get the turnovers and get the points and put a little distance between us and kind of seal the game early."

If there was any thought in Minnesota’s locker room about a stirring second half comeback, that was extinguished with two Lacy touchdown runs in the third quarter.

The second-year runner recorded his first 100-yard game of the season with a 105-yard effort, and his day – along with that of Rodgers – ended after the end of that period with Green Bay up 42-0. Lacy also caught three balls for 27 yards.

Rodgers finished with 156 yards and three touchdowns on 12 of 17 passing to seven different receivers.

Green Bay’s offense, which looked pedestrian for most of the first three weeks of the season has come to life over the last two, due in large part to the fact its defense has given it additional possessions through turnovers, or by pushing opponents deep off the starting line of scrimmage with sacks or tackles for loss.

Heading into this season, Packers head coach Mike McCarthy and defensive coordinator Dom Capers had wanted to rotate in more personnel along the defensive front, and that design seemed to click against a depleted Vikings offense that took the field without rookie quarterback Teddy Bridgewater (ankle).

"It was very impressive – we got the guys who can get it done, we just have to continue to do it and continue to build off it," said defensive lineman Mike Daniels, who had 1 ½ of the Packers’ six sacks.

The lone blemish for Green Bay came late, when Vikings scored twice in the fourth quarter on a Ponder run and a Blair Walsh field goal following a Matt Flynn interception.

It was a night of firsts for several Packers. While Peppers’ interception return wasn’t his first score, it did lead to his first Lambeau Leap – but only after safety Morgan Burnett had to tell him about it.

"It was actually pretty tough to get up there. I was pretty tired after that run, so I barely got up there. It was tough." 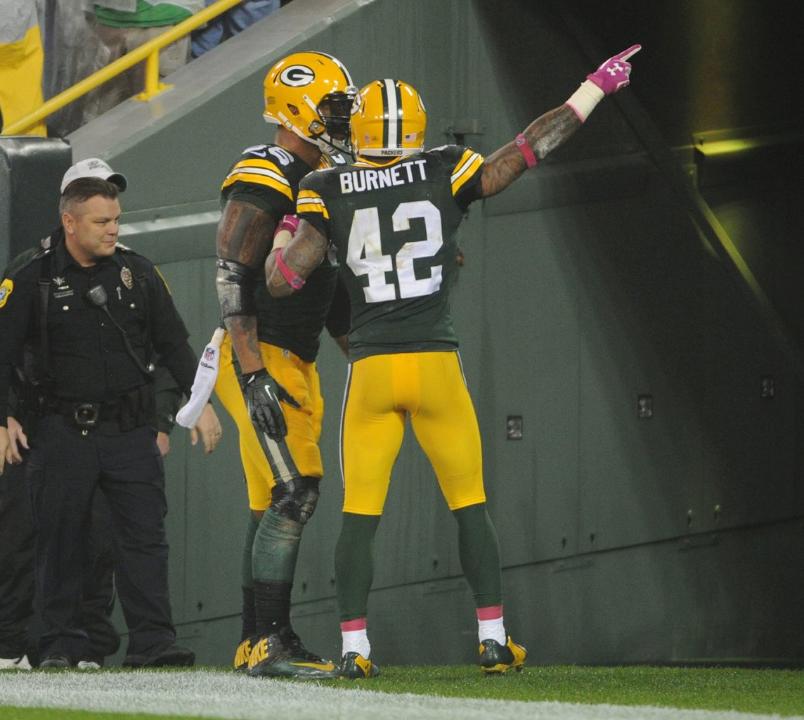 Jordy Nelson grinned thinking about Peppers’ attempt to get over the wall to the fans.

"There is a science – the farther you get out on to the sidelines, the higher the wall gets. It makes a huge difference and you better get a running start. I thought he was big enough he could probably just lift himself up and sit down. And I’m sure he’s a little bit tired." …

Adams also made his first official leap after hauling in that pass from Rodgers. Fellow rookie Jeff Janis made his first professional catch in the fourth quarter on a pass from Flynn. … Rodgers became the second-fastest quarterback in NFL history to reach 200 career touchdown passes as he did it in his 99th game. Dan Marino reached the milestone in 89 games. … Peppers became the first player in league history to record 10 interceptions and 100 sacks. "He had a huge milestone today and that’s pretty impressive what he’s been able to do over his career," Nelson said. "Obviously a great player and has made some big plays for us so far this year."