We've seen this act before. Twice before, actually. And both times the Green Bay Packers returned from a trip to Seattle as losers. This time, much more is at stake with a a berth in Super Bowl XLIX on the line and the Packers believe they're ready to author a different conclusion.

GREEN BAY – The Green Bay Packers are in a unique situation this Sunday in the NFC Championship game at Seattle in that they head in as an underdog to the defending Super Bowl champion Seahawks.

This, despite finishing the year with the same record, the league’s top ranked offense and, likely, the league’s most valuable player under center.

But yet, even locally, there is doubt the Packers can overcome the league’s top-ranked defense and the hostile environment at CenturyLink Field.

If any of the players listen to radio, watch television, or sift through online media, this is what they’re likely to see:

Even Wisconsin zoo animals are picking against them: 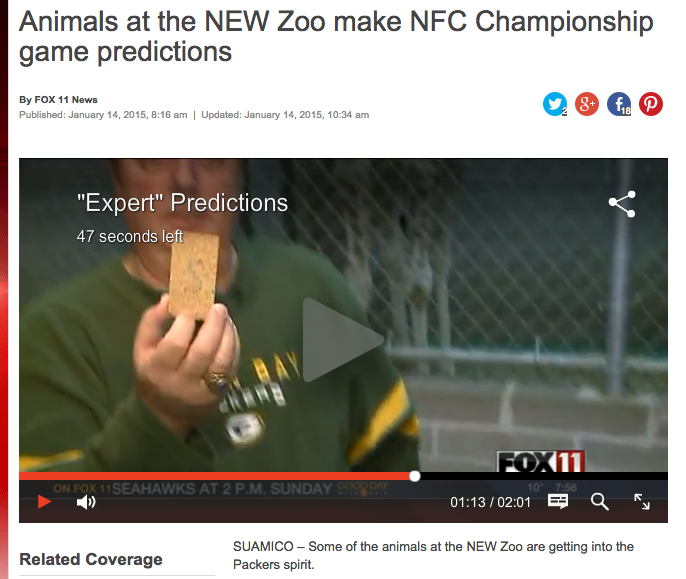 "I don’t have anything to say to them," Packers defensive lineman Mike Daniels said when asked about his response to such critics.

But, doesn’t it take some of the pressure off?

"National media doesn’t mean anything to us," safety Micah Hyde said. "Since I’ve been in the NFL, even in college, we don’t listen to that stuff. But at the same time, we’ve always been relaxed. This whole season. We’re relaxed right now going into it."

Some of Daniels’ teammates had different perspectives on the outside perception however, including one player who has worn both hats as the underdog who did the impossible and the Goliath who was cut down – corner Tramon Williams, who was part of the 2010 wildcard Super Bowl team and the 2011 squad that went 15-1 and failed to live up to that standard once the postseason began.

"We like it that way," Williams said of the team’s underdog status. "It’s typically that way for the most part but over the years we’ve put together a really good team. You always hope to come in as the underdog, but you can’t fly in under the radar forever. But, that’s the way we want it. It’s not going to make the game any different. We still gotta both go out there and play our game. Hopefully we execute the most."

Another member of the Packers who was on both of those teams with Williams, tight end Andrew Quarless, took a different tact, instead feeling like a favorite who has to add a little bit to their game.

"I don’t feel like an underdog," Quarless said. "But they’re definitely a tough bunch. They’re going to bring the aggression so we’ve got to match their intensity and even past their intensity. They come out and play tough."

Russell Wilson uses a variety of tricks to fool defenders and create extra time for his receivers, and running room for himself, one of which is a pump fake that can be pretty convincing.

It’s a skill that has caught the Packers attention – in that they know he does it well – but there’s one way to combat it.

Tramon Williams chuckled and admitted it’s sometimes not that easy for defenders, saying it’s hard to not want to leave your feet, but Matthews shrugged the idea of that being an instinctual act off – at least when it comes to him specifically.

"For players who aren’t trained to hit the quarterback, their instinct is to jump," said Matthews, who led the Packers with 11 sacks this year. "You train yourself. Train yourself and it becomes second nature. It’s second nature for me."

So, what does Packers kicker Mason Crosby think about this slick move Kam Chancellor pulled last week against Carolina?

"If he actually uses any of the linemen to help himself through, it’s a penalty, so they have to come clean over the line so our guards are aware of that and Brett (Goode) as our snapper is aware and try to lift and just get him to at least touch them," Crosby said. "It’s impressive that those guys can jump through. Some great athletes."

The Packers have had three field goals and two extra points blocked thus far this year, and the Seahawks got to a kick in 2012.

"It’s all timing. Every kick is a little bit different," Crosby said. "I just have to focus on kicking the ball. I can’t really worry about all that other stuff. I’ll leave that to the protection and the guys in front of me and make sure that I hit the ball through when I’m called upon."

Speaking of the Seahawks’ 6-foot, 3-inch, 232-pound safety, Packers tight end Andrew Quarless said the best way to counteract the two-time Pro Bowler is to go right at him – like teammate Eddie Lacy did earlier this year.

"I mean, he’s definitely a good player – somebody I’m looking forward to going against," Quarless said of Chancellor. "He’s not a perfect player but me personally I’m ready just to go at him. Don’t be intimidated. Go right at him and make him make a play. Anybody of his standard, of his play, me personally I go at him."

Think you’ve consumed everything and anything Packers? Probably not. Here are five favorites of ours you may have missed:

The Packers have their own "Beast Mode."

The roster is filled with young players … but you wouldn’t know it by how they act .

Going on the road? Unfortunately the Packers haven’t packed much success when doing so .