Statistically, in every phase of the game, the Packers were average in 2015. None of their players were among the NFL's leaders in a major category. So this strange season deserves an unconventional selection for team MVP.

By both quantitative and qualitative measures – whether looking at numbers or re-watching games – the Packers were a mediocre team in 2015.

Granted, yes, a 10-6 record is certainly above 8-8 average; not good enough for a fifth straight NFC North title, it got them a Wild-Card berth into the playoffs, where they beat Washington and almost pulled off an absurd upset at Arizona in the Divisional Round. Their roller-coaster season was wild and, at times, fantastical.

But statistically, in every phase of the game, the Packers were ordinary.

None of Green Bay’s players – not Aaron Rodgers nor Eddie Lacy nor Julius Peppers nor even Tim Masthay – were inside the NFL’s top 10 in a major statistical category.

So picking a deserving team MVP for this year is a bit like selecting the nicest January day for Wisconsin weather. Perhaps "most valuable player" must be reconsidered as "best of the lot." Rodgers, the reigning league MVP, was an easy choice for the team award in 2014.

But for this season, a strange and somewhat disappointing campaign, we have to go with a more unconventional, and thus bizarrely befitting selection.

Your 2015 Packers MVP is Mason Crosby, the placekicker. 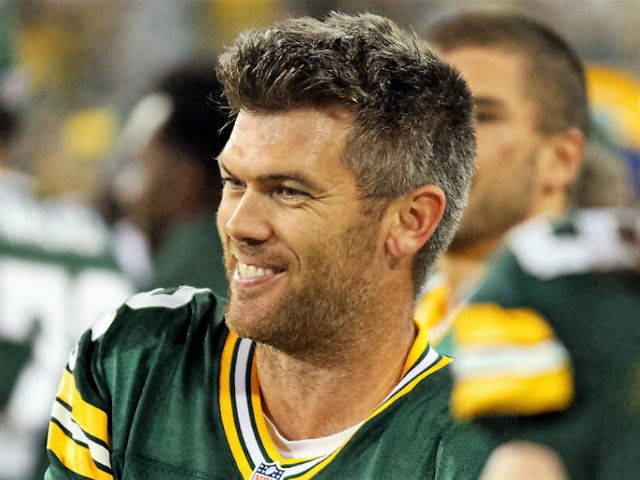 But seriously. Here’s why.

Crosby had one of the best seasons of his nine-year career, which was itself a rare accomplishment for a 2015 Packers player, nearly all of whom took a statistical step back. He made 24 of 28 field-goal attempts, or 85.7 percent. That success rate may only have been good enough for a tie for 18th in the league, but let’s dive deeper into the silver-haired kicker's performance to explore his most valuableness.

As mentioned, Crosby missed just four field goals, all of which were from beyond 40 yards. In a Week 4 win at windy San Francisco, he hooked a 44-yarder wide left; in a Week 13 victory at Detroit, he hit the left upright on a 41-yard try. Then there were the two over which he had no control. The 49-yarder at Oakland in a Week 15 win that was blocked due to a protection breakdown; and the 52-yard shank at home in Week 10 against the Lions, the potential game-winner that was struck so badly and fell so short it surely must have been divinely intervened upon in order to help Detroit win in Wisconsin for the first time since 1991.

Afterward, Crosby said of the kick, "I flat missed it," but we’re blaming the football gods. Or Masthay.

By either removing the blocked attempt against the Raiders or by counting it as converted, Crosby would have been in the top 10 for field-goal percentage. Is that speculative statistical manipulation? Maybe, but we don’t have a ton of great options here.

In the first year the NFL moved back the extra-point line from 2 yards to 15 yards out, Crosby was one of only six kickers that made every attempt. He tied for seventh in the league in field goals from 50-plus yards, hitting 4 of 5. And with 108 total points, he led the Packers in scoring, although that’s common for kickers.

In the postseason, Crosby converted all four of his field goals during Green Bay’s two-game run. The pair he hit against the Cardinals were the Packers’ only first-half points; they also set the NFL record for most consecutive field goals made in the playoffs, with 20. Clutch Crosby hasn’t missed an attempt in the postseason since 2011. 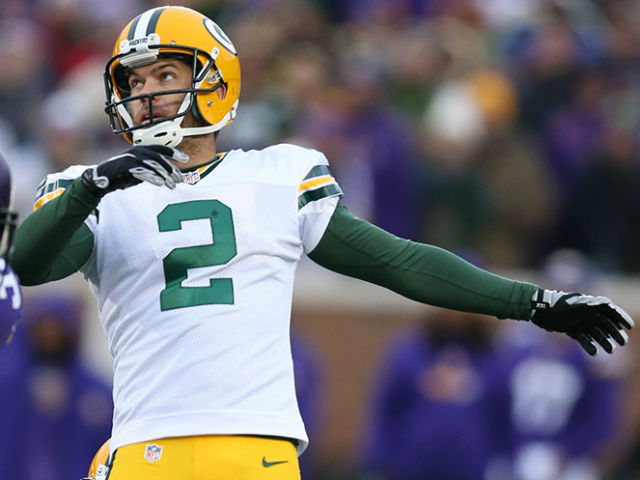 But the play that makes him most deserving of being Packers MVP was not a kick; it was an incredible display of defense and desire in a Week 17 home game against the Vikings. With less than six minutes left in the regular-season finale and Minnesota leading 20-13, Crosby kicked off into the end zone. Speedy returner Cordarrelle Patterson brought it back 70 yards and looked likely he was going all the way for a touchdown, but Crosby, the last hope and at the very last second, made the saving tackle and forced a fumble, which the Packers recovered.

Unfortunately, the offense couldn’t cash in the turnover for points, but it was thanks to Crosby’s play that they had the chance to tie or win the game and remain division champions. According to Pro Football Reference, only two other kickers in NFL history have forced a fumble, so he’s pretty much a special teams legend.

Crosby suffered through a terrible slump in 2012, when he hit a career-low 63.6 percent of his field goals and was on the verge of being released. Since then, though, he’s made more than 85 percent, in cold weather, poor conditions and critical moments.

"I always talk about 2012 was a tough year, but I’m thankful for it every day because it really taught me a lot, on and off the field," Crosby said Monday. "I think these last three years have really shown that and shown my resiliency and shown the way that I want to go about kicking and doing my job every time I get the chance."

Crosby has overcome plenty of adversity, been lauded for possessing the nebulous intangibles of being a team leader and, at 31, is entering not only his kicking prime, but also the open market. Though his contract has expired, he hopes to return to Green Bay.

"This has become home for me and my family and this is the team I want to play for, and I hope we can get something done so I can continue on and continue to be part of this organization," he said. "I hope I can be back here with my teammates next year."

As of now, Crosby, who had an average annual salary of $2.95 million, is an unrestricted free agent, and one that has significantly increased his value. The Packers would be wise to acknowledge that and retain the player than in 2015 was their most valuable.