On Monday, Green Bay signed free-agent tight end Jared Cook to a one-year contract. Here we list the top five free-agent signings the Packers have made under Ted Thompson.

On Monday morning, reports emerged that free-agent tight end Jared Cook had agreed to terms with the Packers and would sign a one-year contract with the team.

That was big news – even though, essentially, it was a 28-year-old underproductive player becoming the prospective backup in Green Bay – because general manager Ted Thompson, as has been overly well-documented, doesn’t sign free agents. At least not those who previously plied their trade for an organization other than the Packers.

But in Cook’s case, the interest was mutual, the fit made sense, the financial terms were agreeable and the dotted lines signed upon, producing a largely positive (almost audible "finally!") reaction from Packers fans long accustomed to and often exasperated by Thompson’s disinclination to signing outside free agents.

Of course, it’s hard to argue with Green Bay’s results under their white-haired, tight-lipped GM and his youth-oriented, draft-and-develop roster-building philosophy. When it comes to free agents, he prefers to sign his own players. And since 2005, Thompson’s first season in charge of personnel, the Packers have made the playoffs eight times – including seven years in a row – captured five NFC North division titles, gotten to the NFC Championship Game on three occasions and won a Super Bowl.

Detractors, however, would say the other side of the same coin is that on a team so perennially successful – and possessing one of the best players in the game in quarterback Aaron Rodgers – aversion to fully explore every avenue of talent acquisition and exercise all methods of team construction, principled reluctance to add perhaps the crucial veteran piece to an oh-so-close roster puzzle and broad disregard for the league’s open market does a disservice to the franchise’s annual ultimate goal of winning a championship.

In Thompson’s 12 offseasons as general manager, he has signed 12 unrestricted free agents, which even Lions fans can figure out is one per year. Four of those never even played in a game for Green Bay. And that doesn’t count Cook, who was considered a "street" free agent because he had been released by his previous team, the Rams; unrestricted free agents are players whose contracts expired. The last time Thompson signed an unrestricted free agent was in 2012, when he took a chance on defensive lineman Anthony Hargrove, who was later cut.

Thompson has inked numerous other players off the so-called street, including wide receiver James Jones last September and outside linebacker Erik Walden midway through the 2010 Super Bowl campagin. But he often adds players like that by necessity – because of injuries or underperformance at a particular position, and usually just before or during the season.

In the offseason free-agent signing period, which for practical purposes lasts from approximately early March through early May, Thompson almost always stays out of the NFL spending spree.

But, in the wake of the Cook deal, which the Packers announced Monday afternoon and is reported to be for one year and up to $3.6 million (including incentives), we decided to take a look back at some of Thompson’s best offseason free-agent signings from the last dozen years.

Here are the top five free-agent signings, street and unrestricted, the Packers have made under Ted Thompson. And no, Marquand Manuel didn’t make the list.

The inside linebacker was signed on March 18, 2008, to a two-year, $5.2 million contract after spending four seasons with St. Louis. In Green Bay he proved to be a versatile and valuable backup, especially in pass coverage, often replacing A.J. Hawk in the nickel defense and also showing ability as a blitzer. In his first two seasons with the Packers, Chillar played in 26 games and totaled 111 tackles, three sacks and nine passes defensed.

Near the end of 2009, he was rewarded with a four-year, $21 million extension. But he only had 16 tackles in eight games the next season due to a shoulder injury and was released in 2011. Still, Chillar was a niche player who filled a key role on a Super Bowl-winning defense – the kind of hole-filling free-agent signing for which many Packers fans clamor every offseason.

Released by the Vikings, Guion was quickly signed by Green Bay to a one-year, $985,000 contract on March 17, 2014. After nose tackle B.J. Raji tore his biceps and was lost for the season in August, Guion became one of the Packers’ most invaluable players. He recorded a career-high 32 tackles and 3.5 sacks, anchoring the defensive line as Green Bay came within a late meltdown in Seattle of reaching the Super Bowl.

Guion was suspended for three games last season and also the subject of some negative (though not unfounded) media attention, but he has yet to miss a game due to injury and was re-signed by the Packers to a three-year, $11.25 million contract in February. A free-agent bargain when Thompson brought him in, Guion has become a worthwhile asset at a hard-to-fill position. 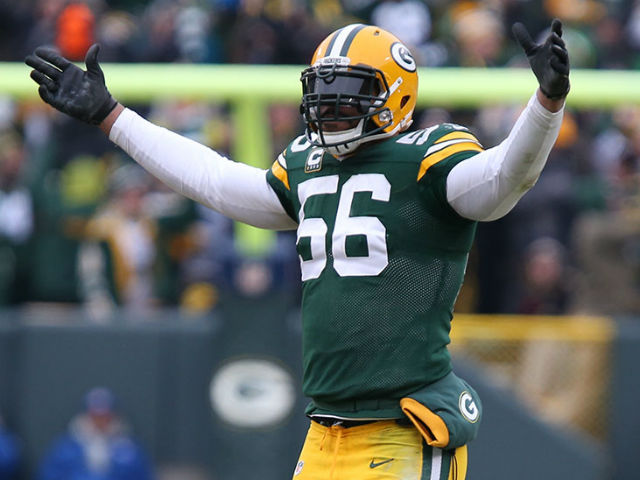 After the Bears cut the then 34-year-old Peppers for salary-cap reasons, Thompson saw an opportunity to make a rare, high-impact free-agent signing. On March 15, 2014, he inked the eight-time Pro Bowl defensive end to a three-year, $25.5 million deal, which included a $7.5 million signing bonus, and watched the rejuvenated Peppers register 44 tackles, seven sacks, four forced fumbles, three recoveries and two interceptions at outside linebacker, before adding 2.5 sacks and two more forced fumbles in the playoffs.

In 2015, Peppers led the team with 10.5 sacks, his output and consistency allowing Clay Matthews to play inside linebacker for almost the entire season. An absolute rock of durability, Peppers has played all 16 games for the last eight years and will return for his 15th season in 2016.

In his second season as general manager, Thompson made his first high-profile free-agent signing, contracting Pickett for four-years and $14 million on March 17, 2006. It proved to be one of the executive’s best decisions. Pickett, a mammoth nose tackle and elite run-stuffer, spent eight seasons in Green Bay, spanning two full contracts and playing 110 total games.

He was an integral part of the Packers’ No. 1-ranked rush defenses in 2009 and 2010, helping to fortify the line during the Super Bowl season. He is the last player on whom Thompson used the franchise tag, receiving the designation in 2010. After leaving the Packers, the affable Pickett only played one more year in the NFL, retiring after the 2014 season.

Who else could it be? Woodson, uber-talented but considered to have character concerns, turned his enormous potential into prodigious production and became one of the most important defensive players to ever wear the green and gold. Thompson signed the ex-Raider to a seven-year, $52 million deal on May 1, 2006 – Woodson admitted he’d have preferred to play somewhere other than Green Bay, but the Packers were the only team to offer him a contract – and after a rough first season, the cornerback flourished.

Not only was Woodson a five-time Pro Bowler, Super Bowl winner and turnover-producing machine, he became an undeniable team leader for the Packers. The NFL’s defensive player of the year in 2009, Woodson punched his ticket to the Pro Football Hall of Fame during his seven seasons in Green Bay and remained a solid defensive back until retiring at the end of 2015.

Which free-agent signing do you think was Thompson's best? Is there another deserving player who should be in the Packers' top five instead? Let us know in the comments!