The Green Bay Packers continued their dominance at Lambeau Field in a high-scoring victory over the Atlanta Falcons on Monday Night Football. While Aaron Rodgers added to his MVP candidacy, running back Eddie Lacy set the tone with a powerful performance.

Aaron Rodgers looked downfield, nothing. So, he dumped a pass off to Eddie Lacy, just over his offensive line.

Then, disaster – for Atlanta.

Lacy started up field, and defenders Paul Soliai and Joplo Bartu converged. Lacy hit the brakes, and 575 pounds of Falcons collided. To make matters worse, the pair tripped up safety Kemal Ishmael on his way to Lacy.

The Packers running back re-started to his right, and Paul Worrilow sized him up. Nope. Spin move, and Worrilow flew helplessly past. Another broken ankle tackle, and the safe outlet to the running back wound up being a 13-yard gain that set up the Packers’ third score of the first half in a 43-37 victory over Atlanta Monday night in front of 77,512 at Lambeau Field.

Call him a joystick. Say he was a human circle button. Whatever the descriptor, Lacy proved just how valuable he can be when he’s healthy (73 rush yards, TD, 5 catches, 33 yards, TD).

"I haven’t spinned in a while, so that felt kind of good," Lacy said. "Anytime you get to have a physical run and you get to run somebody over it definitely gets the rest of the team into the game."

Unfortunately, he couldn’t finish the game with a hip bruise.

"Yeah, I think so," he said when asked if he would be OK going forward.

Exactly a year ago from Monday’s game – Dec. 8, 2013 – Lacy was a rookie out of Alabama, playing in his 12th career game against these same Falcons. He was just learning how to manage the cold weather and his asthma in such conditions.

A year ago, he rushed 20 times for 65 yards with Matt Flynn under center, the focal point of the Falcons defense.

Fast forward 365 days and Lacy isn’t the option, he’s a option – and the distinction is important.

When asked if he felt fresher, Lacy said: "Definitely. We’re rotating a lot and that helps out too. And just being there for the check downs. I’m not running in between the tackles a lot and we get the check down and it’s a lot of smaller defenders trying to hit us, so that definitely helps out a lot, too."

That said, when he does get those smaller defenders in his sights, Lacy doesn’t exactly shy away from contact when he is in space.

As the Packers now head to Buffalo and the Tampa Bay before finishing the regular season at home against a stout Detroit defense on Dec. 28, Lacy is primed for a big finish, especially because Mike McCarthy won’t deviate from his plan of using Starks.

And when Lacy was knocked out with the bruise – "Whenever I ran in to two big dudes," he said with a smile – it was James Starks (75 rush yards, TD) who salted away the victory with 43 yards on the Packers final, game-ending drive.

"To have two backs like that is, I mean that’s very valuable," Packers right tackle Bryan Bulaga said. "They have their differences and they have their similarities. I can’t tell you their 40 times. I got no idea what that is, but I know they’re both two big, strong backs. 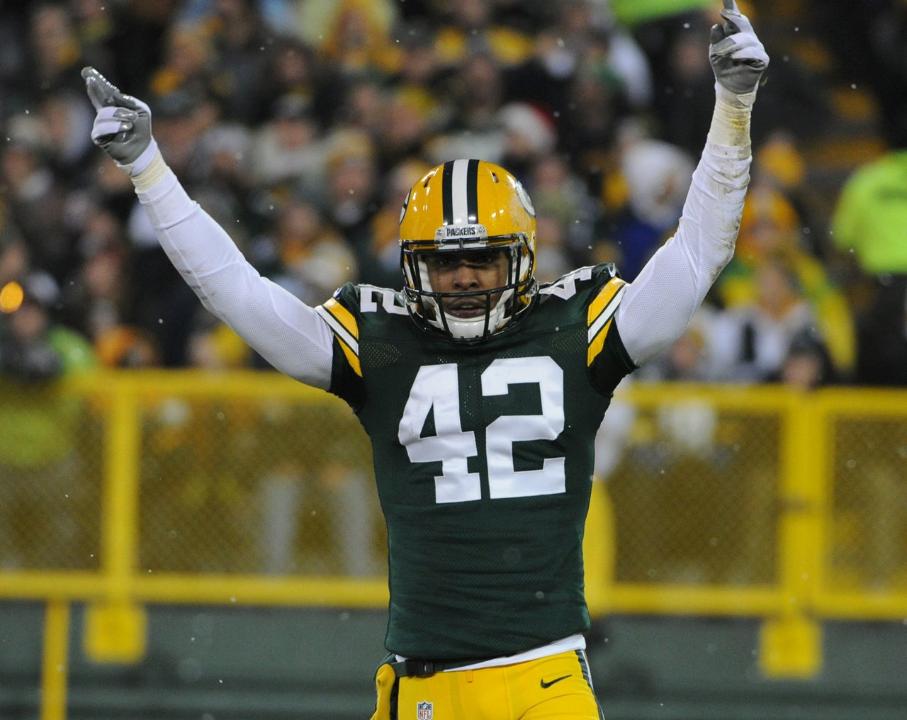 Matt Ryan rolled to his right late in the first half, a designed bootleg. It worked, as he felt no pressure from the Packers rush and had time to survey the field. He looked to his immediate right, where Julio Jones was bracketed by the sideline and Packers safety Morgan Burnett.

Ryan then looked away, down the middle of the field. No one was open. So he looked right again at Jones – and Burnett – and threw the ball.

It was one of the easier interceptions of Burnett’s career, and the safety returned it 32 yards to the Falcons’ 15-yard line.

"The defense puts you in position to make plays," Burnett said. "I was just doing my job. I thought he was trying to throw it out of bounds or throw it away and I just jumped up, reached and caught it and tried to make a play with the ball in my hands."

Five plays later, Rodgers found Lacy for a 2-yard touchdown on a shovel pass to give the Packers a commanding 24-7 lead with 4:20 left to go in the first half.

Heading into Monday night’s game, the Packers had plus-nine turnover margin at home, which helped to contribute to a plus-139 point differential.

The offense was clicking again before Burnett’s interception, but the play helped to once again give the Packers a large margin of error to work with on both sides of the ball.

Atlanta was up to the challenge, though — Ryan executed well in the second half, especially when he had time to find Jones and Roddy White (3 catches, 42 yards) down the field, making it more of a game than it looked like it would be after the first 30 minutes of play were completed.

The Falcons outscored the Packers 30-12 in the second half, with Ryan completing 18 of 26 passes for 263 yards and 4 scores. Jones caught six second half balls for 159 yards and a score.

"They had a great second half," Packers linebacker Julius Peppers said matter of factly. "I’m not really sure what was going on or what adjustments they made. You tip your hat and give credit to where credit is due."

Atlanta drew to within 40-30 before Packers defensive back Davon House stopped Jacquizz Rodgers on a 2-point conversion attempt with 4:23 to play.

"It was pretty big," House said. "The backside man, tight end, we decided to go press him. Once I decided to press him, the ball was snapped and he fanned out to Clay (Matthews). I saw the running back and the ball and I went to go hit him.."

That play kept the margin at two scores, which the Packers added to with a 53-yard Mason Crosby field goal shortly thereafter.

"Obviously you gotta make that kick because you miss that you give them field position in a good spot and they were moving the ball," Crosby said. "That was huge."

It was a key turn of events, House’s stop and Crosby’s field goal, as the Falcons would add one more score with 2:22 left.

"That’s the most important thing – getting the win," Peppers said. "Obviously a lot of things could have been done better but at the end of the day you play the game to win. You don’t play to put up a lot of stats. So, we have 10 (wins) and we’re sitting in a spot where we want to be." 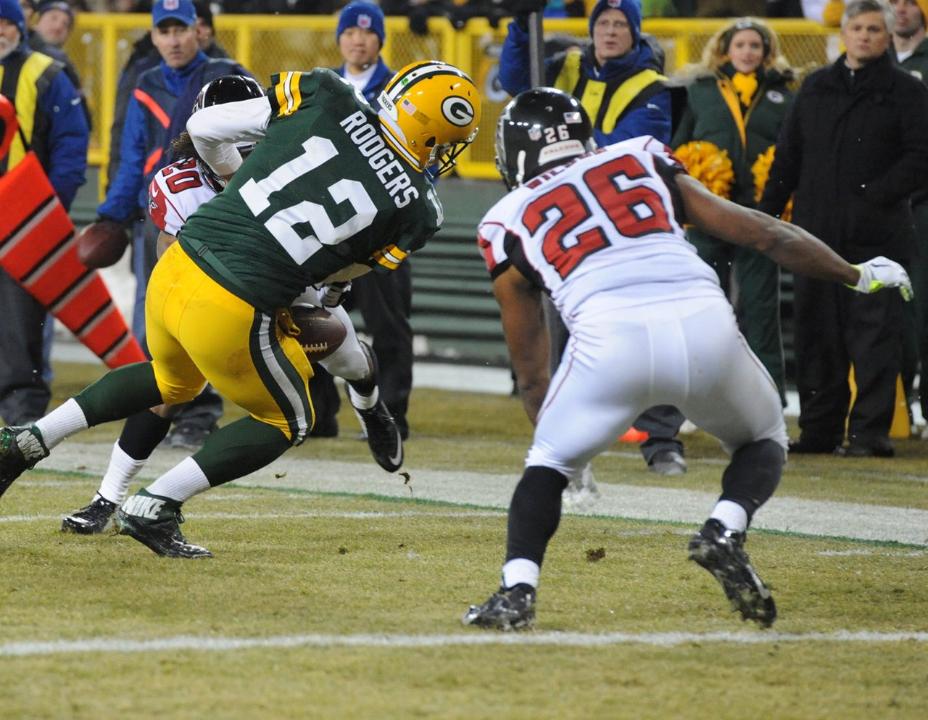 On the play above, Aaron Rodgers dove head first on a scramble toward the Falcons end zone, and the ball wound up coming loose. He recovered, but not before 296-pound Atlanta defensive lineman Tyson Jackson came barreling into Rodgers with a shoulder, a late hit that resulted in an automatic Packers first down at the Falcons’ 2-yard line.

It also led to a little back-and-forth between Rodgers and Falcons defensive back Josh Wilson.

"As we were unpiling there, I was getting off and kind of go pushed in the back and accidentally stepped on him," Rodgers said. "Then there were some words exchanged, and then I think we figured things out there later in the game."

The play ended the first quarter, but set up an easy 1-yard touchdown run by Lacy that gave the Packers a 14-7 lead.

Rodgers finished the night with 28 rushing yards on five carries, and the quarterback often opted not to slide – opening himself up for some punishment.

But, the carries were effective.

Then, with the Packers hanging on late 43-37, Rodgers took off for a 12-yard gain – in which Rodgers wisely slid for a key first down, forcing a Falcons timeout.