Coming off back-to-back blowouts, the Green Bay Packers received a challenge from the last place Minnesota Vikings Sunday afternoon in Minnesota, and the green and gold muscled up on both sides of the ball for a 24-21 victory.

It was just three days ago that I wrote "as Aaron Rodgers goes, so go the Green Bay Packers." Then on Sunday, the Packers loaded up on the shoulders of Eddie Lacy and squeaked past a game Minnesota Vikings squad, 27-24.

What was interesting was that the Packers proved they could run the ball against a slightly above average defense when it mattered most – the Vikings came into the game ranked 12th in the league in total defense (eighth against the pass, 12th against the run) and they managed to score enough points to win.

This game reminded me a lot of their last-second victory in Miami back on Oct. 12 – doing just enough to get by on the road.

I’m still not convinced this Packers squad can beat a Super Bowl caliber opponent – New England will go a long way in answering that question on Sunday afternoon – but they have won games that a good teams do since falling to Detroit in week three.

Say what you want about the Jets, but that’s a top tier defense. Rodgers and the offense were good enough for big scores early. They beat a top-tier defense in Miami on the road.

There’s always a "but" though, unfortunately.

But the Jets were quarterbacked by Geno Smith, opened the door for Ryan Tannehill’s coming out party and Teddy Bridgewater essentially handed the game to the Packers on several occasions.

The week of the Philadelphia Eagles game, I agreed with Dennis Krause and Doug Russell on Krause’s "Roundtable" television show that it would be a "defining game" for this Packers team. They hadn’t really beaten anyone with a winning record.

The Packers blew them out, and yet … I looked at the Eagles with Matt Sanchez under center and thought, are they as good as their record?

This is the NFL though. Who really knows anything? New England can drop 45 on the Packers and limit Rodgers and Wisconsin will be thrown into a tizzy before the Packers end the season on a four-game winning streak and win the NFC North.

What I have learned about the Packers is that they know how to win.

The Vikings made Rodgers and his receivers work really hard to get open, and to move down the field. They forced Lacy to turn into the "Beast Mode" of the Midwest. Nothing was easy.

Yet there was Rodgers, rolling to the far sideline, turning and heaving a perfect throw to Richard Rodgers for a touchdown.

There was Andrew Quarless, in the right place, at the right depth.

There was Mike Daniels, getting a sack when needed.

There was Lacy, salting away the final, key moments.

And it may seem inconsequential, but how about Tim Masthay pinning the Vikings twice inside their 20 and averaging 41 yards a kick when God knows when the last time he punted when it mattered.

Packers head coach Mike McCarthy said something interesting in his postgame press conference when he noted that "handling success" is the thing he’s most concerned with because his team prepares to win and expects to win.

It made me think McCarthy was already laying the groundwork for the madness that is coming this week – Patriots Week – one CBS broadcaster Jim Nantz couldn’t wait to call a potential Super Bowl preview just hours after each team won on Sunday.

There will be time enough for that, of course. And while Sunday didn’t necessarily prove the Packers are an elite team, it proved they can win tough games on the road, and that does count for something.

Play of the game 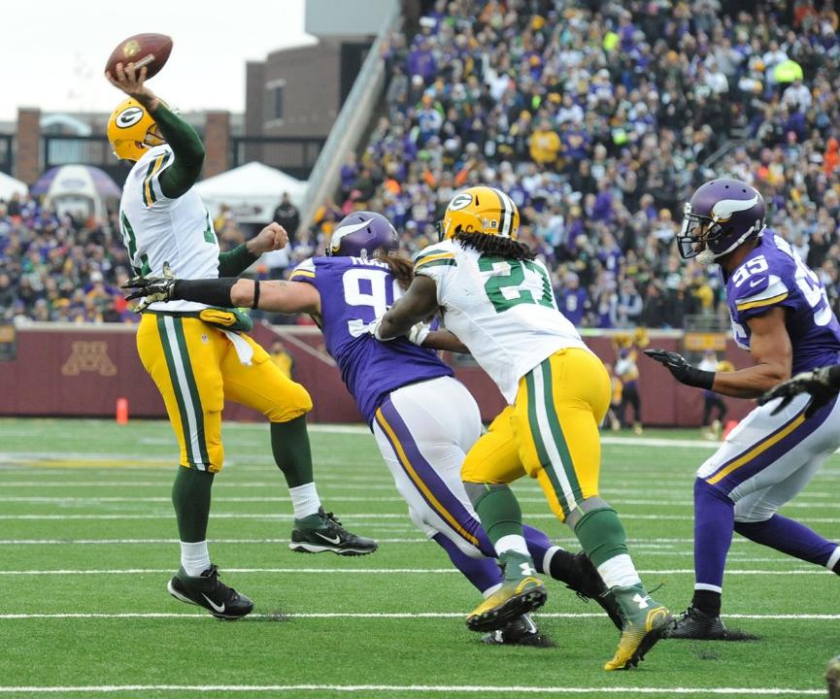 Yes, Lacy was the player of the game, but for as good as some of his individual runs were – including on the late shovel-pass touchdown from Rodgers – but how ridiculous does this look right here?

Rodgers no doubt knew Richard Rodgers was going to be there (it’s in the play) but the ability to quickly turn his body to even make the throw, and to have the arm strength to make it a no-doubt touchdown, was unreal. Great photo by Packers.com photographer Jim Biever here.

On the Rodgers-to-Rodgers throw back touchdown in the second quarter shown above:


You know it was a crazy touchdown pass when you hear the #Packers team chaplain yell "Oh my god!" on it. — Jason Wilde (@jasonjwilde) November 23, 2014