It's Milwaukee Beer Week, and there's no better news to share than the expansion of one of the city's favorite urban breweries. Good City Brewing will add square footage to its taproom, along with a rooftop patio and extended beer distribution.

There’s no better news for the start of Milwaukee Beer Week than news regarding the expansion of one of the city’s favorite urban breweries.

An expanded space, rooftop patio and extended distribution is on the docket for Good City Brewing, 2108 N. Farwell Ave.

Good City, which opened less than a year ago on Milwaukee’s East Side, has met with extraordinary growth during its first 10 months in business. And that’s led the brewery team to move forward with plans to accommodate both its growing tap room business and the demand for its beer across the state. We reported the news in March, but today received additional details about the expansion and what it means for the brewery.

Strong demand for its beer has led Good City to sign with Beechwood Sales & Service for exclusive distribution of its beer beginning May 1.

In kind, the brewery has signed a lease for the space adjacent to its current brewery and taproom. The 11,000 square feet of space will include 1,800 square feet of additional production space, allowing brewmaster Andy Jones to grow Good City's brewing capacity from 500 barrels per year to 2,500.

Construction has already begun on the space, which will allow the brewery to add two additional fermentation tanks, as well as a canning line that will allow Good City to launch cans of its Reward Double IPA, recent winner of Brewing News’ National Imperial IPA Championship.

Plans also include the addition of Good City Hall, an extension of the tap room and private dining space which will accommodate 130 guests, along with a second kitchen which will be used for prep space as well as catering. 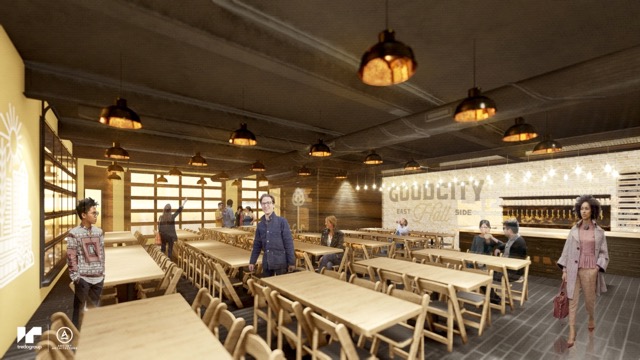 "Our business has been built around the tap room," notes co-owner David Dupee. "And this expansion will finally allow us to work with our guests to plan larger weekend events, including wedding receptions, corporate events and large-scale beer dinners."

Good City Hall will feature its own private bar with eight Good City Brewing taps, along with a new banquet menu for special events. Chef Guy Davies notes that the menu will provide a variety of more upscale options for clientele, including multi-course dinners featuring items like vegetarian entrees, seared scallops and fish, braised meats and dishes like lavender and charcoal salt-rubbed lamb chops.

"We’ve had great success with our beer dinners," notes Davies, "And this gives us the opportunity to expand what we’re doing to include larger events. I’m looking forward to getting back into some of the more traditional cooking I was doing before, as well as working with people to create custom menus for their events."

The addition will also include a new 4,000-square foot rooftop patio and bar, which is expected to accommodate 110 guests.

"Milwaukee is starting to see more rooftop spaces," notes Dupee, "But, we’re still a bit behind the curve. So, we’re really excited to bring this to the East Side."

In celebration of its first anniversary, Good City Brewing will host a birthday bash on Saturday, June 17. Details are forthcoming; however, the party will include the release of two new beers: an oak barrel aged version of its Detail Porter in 22-ounce glass bottles, as well as an East Coast-style IPA called Dr. J.

Dupee says the hope is that construction will be completed on the new spaces by July 1. Good City Hall is available for bookings beginning in July.