Fink's patio is the opposite of boring, and everyone knows it

They say it's what's on the inside that counts - and Fink's is certainly no slouch in that department. But it's the outside that's been catching people's attention in recent years - most recently with the addition of a cozy outdoor patio.

They say it’s what’s on the inside that counts – and Fink's is certainly no slouch in that department.

With a collection of old-school arcade games and pinball machines plus an impressive list of cocktails to help fuel your latest multi-ball attack and a cozy friend’s basement vibe – complete with a shelf holding real high school trophies earned by the owners and a cocktail book collection regularly referenced for ideas and inspiration, not merely for decoration and dust collecting – the Lower East Side lounge has become an essential hangout, whether for those waiting for a table at the always bustling BelAir Cantina across the street or just people wanting a place to soak in a good cocktail and good company.

But it’s the outside that’s been catching people’s attention in recent years – most recently with the addition of a cozy outdoor patio. 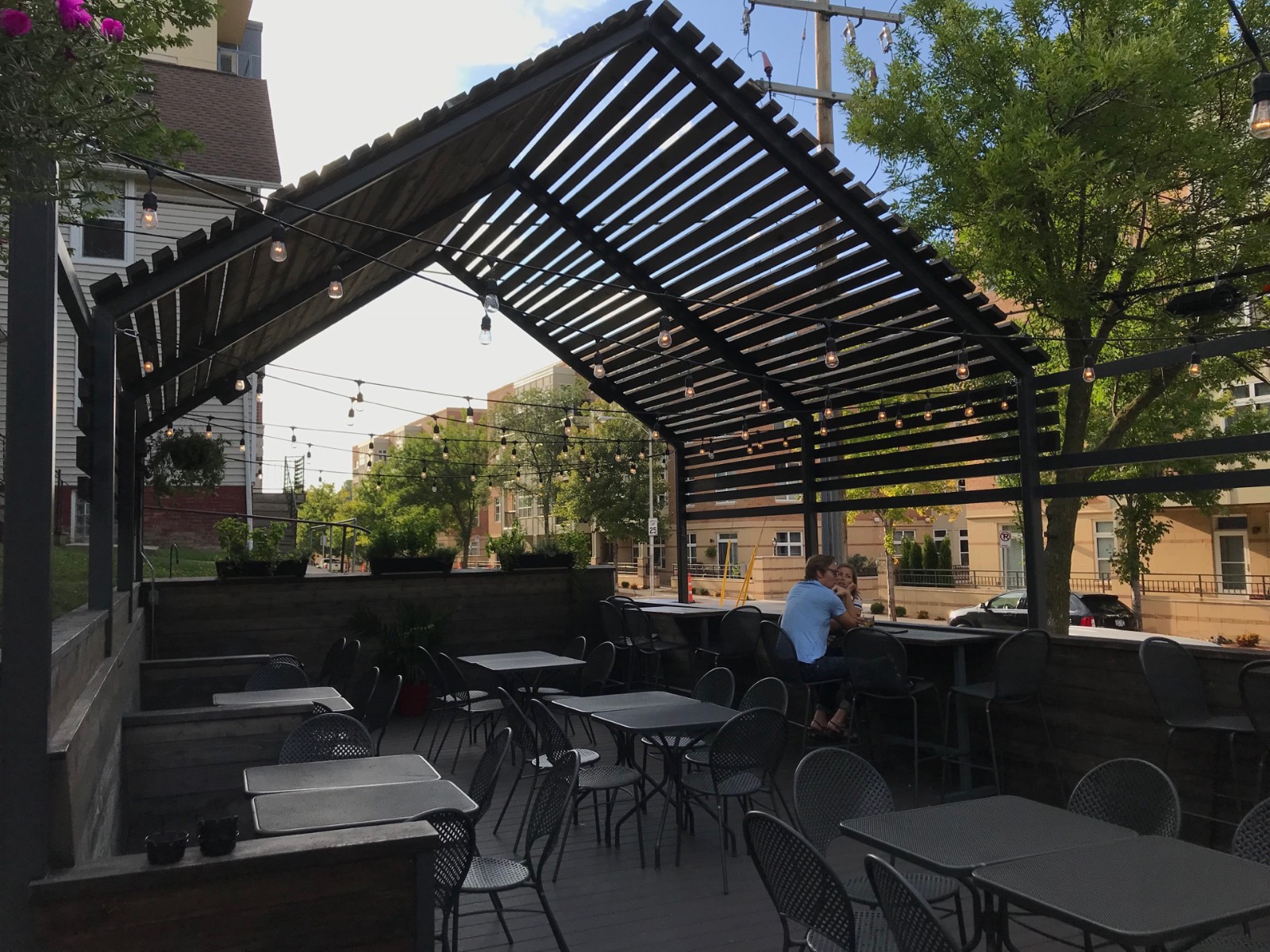 Opened in January 2013 – though it feels like it’s been a Milwaukee staple for far longer – in the former Redroom on the border of Brady Street and Riverwest neighborhoods, Fink's originally used the space next to the bar as just an extra parking lot. After a few years, however, the owners – the Bel Air triumvirate of Kristyn Eitel, Leslie Montemurro and Scott Johnson – figured there was a better use for the ragged, limited space.

"When I started here, it was a pretty beat-up parking lot," recalled Fink's manager Pete Twohig, who hopped on board with the bar four years ago. "You could fit, like, two cars in it. It was basically for my car."

So, in the summer of 2017, Fink's announced its new plan: an outdoor patio, which officially opened near the end of the season. The timing actually worked out, according to Twohig, who admits that, for the first month, they were still figuring out how to set up the space and how to make the most of the bar’s new open-air addition.

It didn’t take long, however, for Twohig and company to learn. The patio is now fully utilized, complete with a fire pit, popular outdoor games like bag toss and oversized Connect Four – in addition to the board games and trivia competitions stacked on the shelf inside the bar, free for the taking – plentiful seating and a perfect relaxed backyard atmosphere. It’s the ideal match for the cozy, easy-going neighborhood vibe of the interior as well as the drink menu, which serves up everything from cheap beers to intricately concocted cocktails, thoughtful mocktails to old fashioned alcoholic freeze pops, and everything in between. 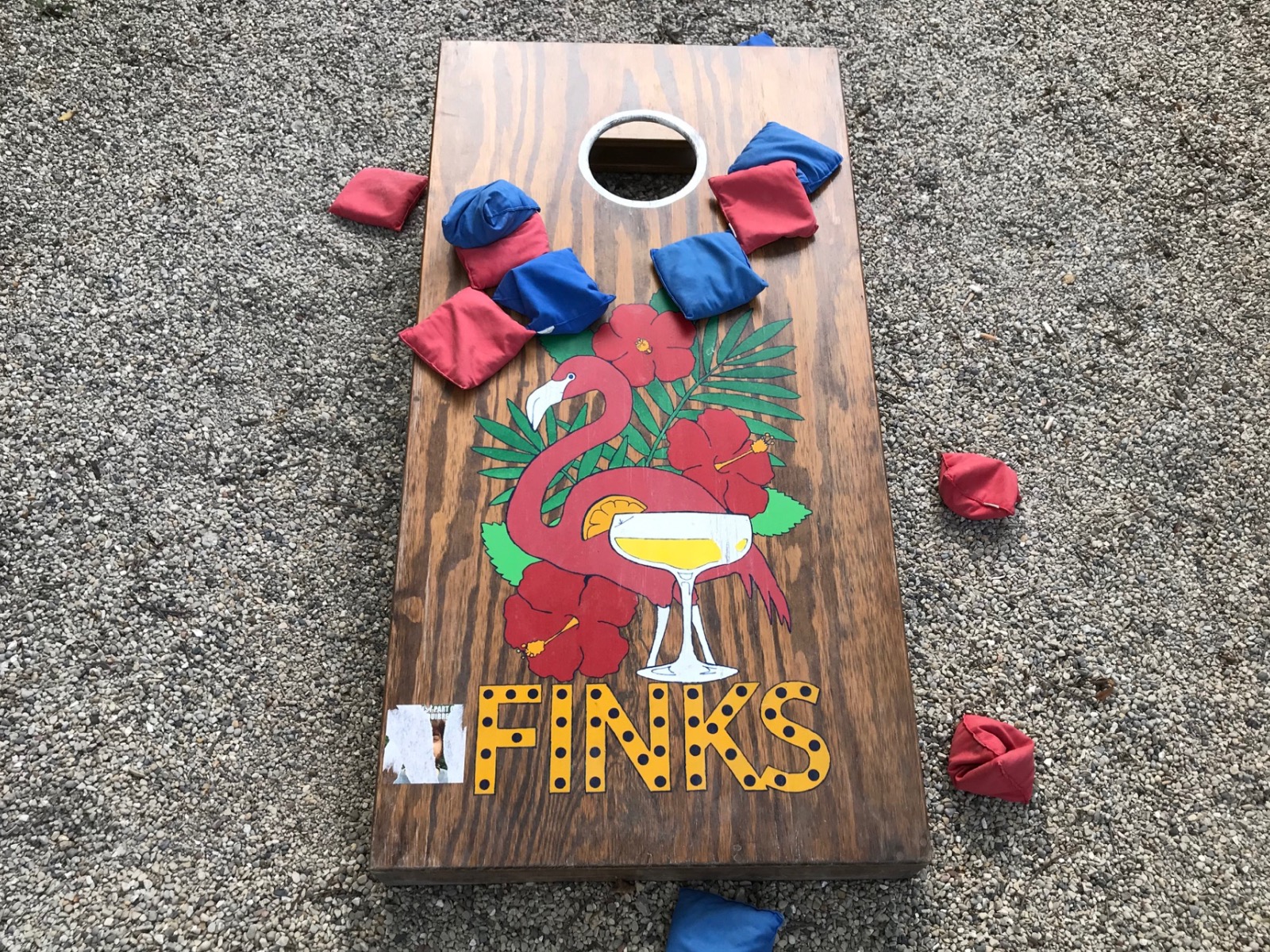 For those still in need of evidence of the cocktail lounge’s playful lack of self-import, the cocktail of the day when I dropped by for my visit was "rum ham," a combo of a shot of rum and a can of Hamm’s inspired by "It’s Always Sunny in Philadelphia."

"We have fun, high-end cocktails, but it also has a very everyman vibe," Twohig said. "You can still get a $2 beer, but you can also get a high-end Manhattan. People want to have a nice cocktail; they just don’t want the pretension that can go along with it." 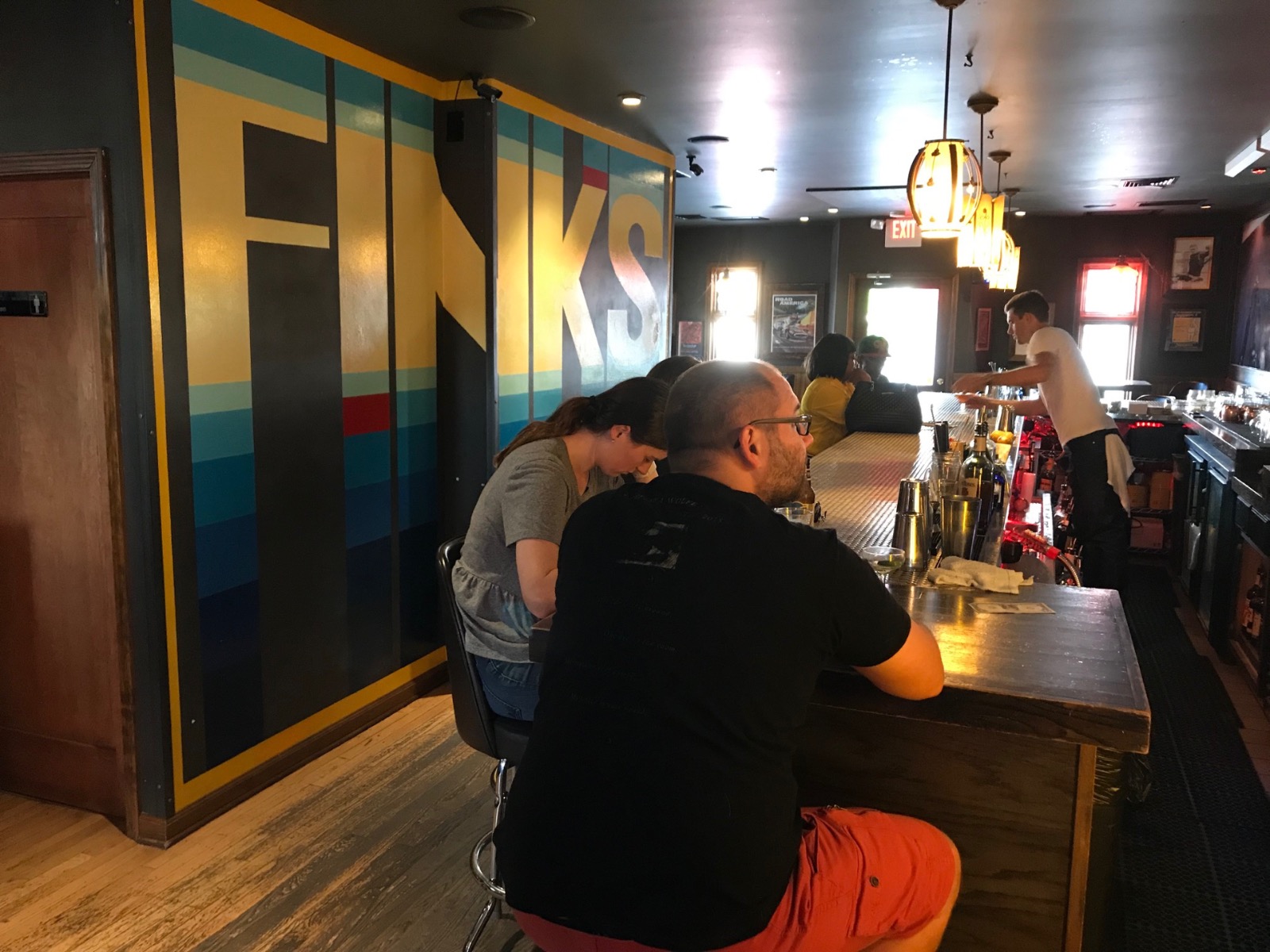 Two years prior to the patio’s arrival, however, people’s eyes were also drawn to the outside of Fink's – albeit for sillier, delightfully infamous reasons.

In June 2015, the bar turned its north-facing wall into quite the statement piece: a mural claiming "Couples are boring and everyone knows it." The artwork – created by sign painter and lettering artist Sarah Linkus – caused quite a stir when it was unveiled, with some taking the playful poke at couples very seriously. Eventually, somebody decided to take the sign’s message into their own hands and sneakily alter the mural to read, "Couples are boning and everyone knows it." 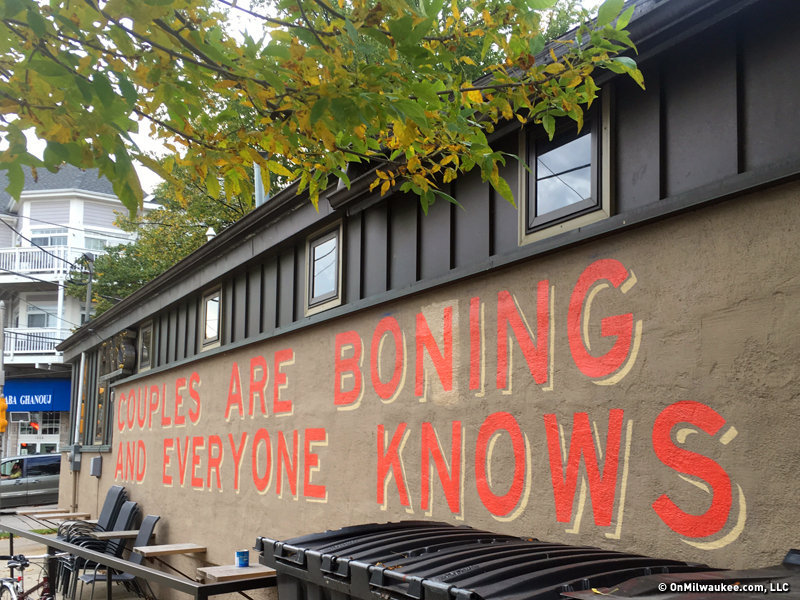 "I would get calls from the neighborhood; there was one mother who said, ‘I have to drive my son to school every day, and he has to see that,’" Twohig recalled, chuckling.

The piece was eventually flipped back, but after the art vigilante repainted the unwanted (though not unamusing) addition, Fink's decided a new piece was the only way to spark a truce with the unknown mural mangler.

And so, the Great Fink's Mural War was over, settled by a new hand-painted message that no one could argue with: a bright, glowingly yellow "Hello Milwaukee." Now, instead of inspiring debate, the patio’s boldly colorful greeting inspires countless sunny social media posts, growing into an iconic sign of Cream City.

"It’s recognizable, it’s fun and every day I see somebody taking a picture in front of it," Twohig said.

During the original mural kerfuffle, Fink's had coasters where customers could provide ideas for new rotating short phrases for the small patio wall – originally with a $500 tab for winning quotes. However, as you might expect from a crowd of dubious sobriety, the suggestions didn’t quite go as expected.

"There were some really strange ones and rude ones," Twohig laughingly remembered. "There was a lot of, like, truther stuff. Which was really weird. So yeah, we’re definitely not doing that." 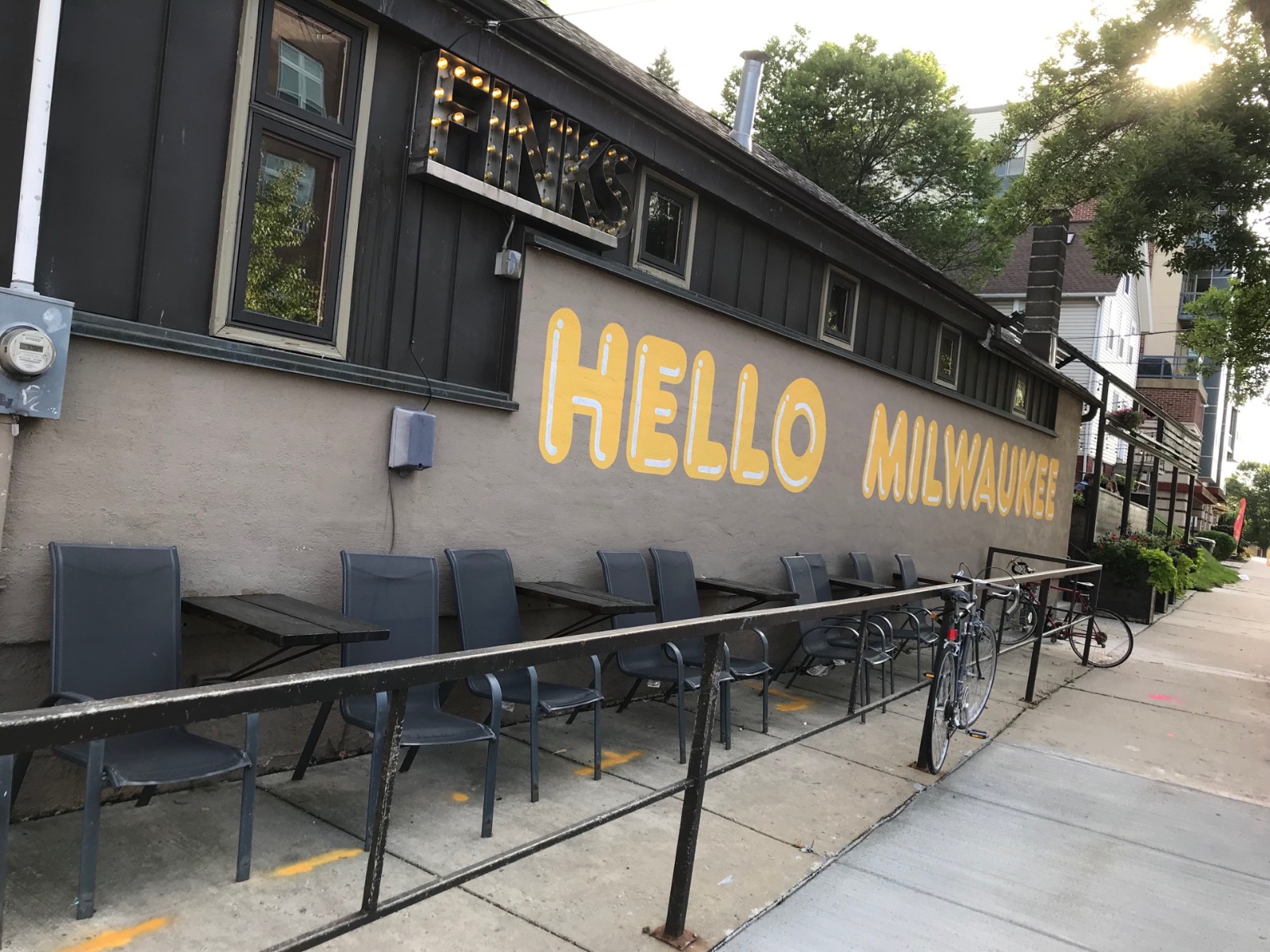 So "Hello Milwaukee" will stay the greeting to Fink's and its patio, for the time being. But other small but nifty aesthetic changes are being made. The patio just added another new sign, combining the Hamm’s logo with Fink's, with space for another potential mural underneath. No matter what goes there, knowing the cocktail lounge’s history with art, it’ll likely be something that’ll capture your attention (and maybe might need some security).

Then again, nowadays, the Fink's comfy patio can steal your attention – and steal hours of your night away – all on its own.