Summer is coming (eventually). And when it arrives, there will be a new spot to get some relief from the heat. Thanks to a new brick and mortar location, Pete's Pops will soon have a home base to make (and sell) its delicious pops.

Summer is coming (eventually). And when it arrives, there will be a new spot to get some relief from the heat.

Pete’s Pops, the mobile popsicle operation that’s made a splash at events and farmers markets around the city, is establishing a brick and mortar location at 3801 W. Vliet St. It will function as a home base for popsicle production, as well as a walk-up retail storefront where customers can purchase pops.

Pete Cooney says the commercial kitchen portion should be done in April or May, after which he’ll begin focusing on creating a retail space with a walk-up window.

"We’d like to design the space in a way that allows people to hang around and enjoy their pops," he says, noting that the walk-up window is likely to begin with weekend hours. "We’re hoping for a mid-June grand opening."

Cooney launched Pete’s Pops in 2014. And, over the past four years, the business has taken off, relying primarily on farmers markets and events. Over the years, Cooney has operated in a number of commercial kitchens in various locations across the city. However, after winning the 2016 Near West Side Partners’ Rev-Up MKE live pitch competition, Cooney says he committed to staying in the area.

"After I won the contest, I really focused my efforts on looking for a space in the area," he says. "I believe in the neighborhood and I really want to support its growth."

Thanks to his connections with the Near West Side Partners, he met Tom Straub, a local businessman and building owner who was looking for someone who could really help activate the space.

Cooney says the brick and mortar location was a necessary next step for the business, which had pretty much tapped out its capacity for growth.

"I knew I needed to create an infrastructure that would allow the business to grow," he says, "And part of that was finding a permanent location where we could operate without constraint."

Another piece of the puzzle was bringing in someone who could handle the day-to-day operations of the business. Fortunately, Cooney says, he found that in friend and colleague Edson Juarez, who he recently hired as full-time operations manager for Pete’s Pops.

"I went to college with Edson, and he’s always been a big supporter of the business," says Cooney. "For years, whenever I was in a pinch, I knew I could call him and he’d help me out. Now he knows the business as well as I do, and it’s good to have someone you trust who’s able to keep things running."

Cooney says he’ll still be a presence for the company, but putting the needed infrastructure in place will allow him to step back from the production aspect of the business. 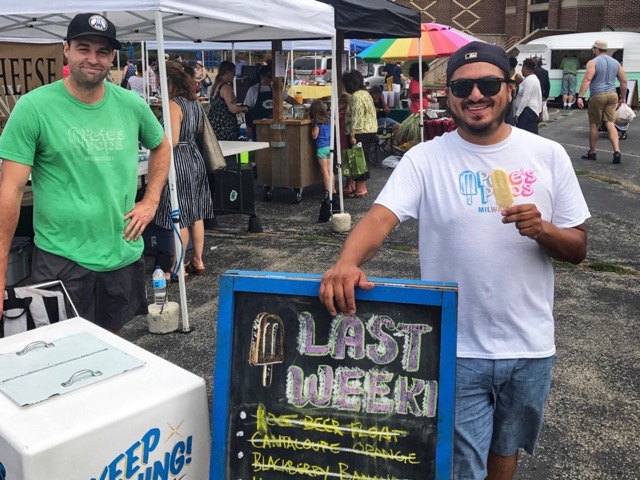 Juarez says he’s thrilled to be a part of the Pete’s Pops business.

"It’s been so fun to see how far this business has come," he says. "I moved back to Milwaukee from Atlanta at the end of his first summer. I always thought it was such a great idea for a business; there was nothing like it in the Midwest at the time, and I loved being a part of it. So for a couple of years, I’d just help out whenever I could."

Eventually it got to the point where Juarez was taking on more and more.

"Right now I’m doing a little bit of everything," he says. "But it’s really exciting. Having our own space where we don’t have to worry about stepping on anyone else’s toes will be great. We’ve had to say ‘no’ to a lot of events during the summer. But, this expansion really allows us to have a larger presence in the city."

Juarez says that having presence in the Martin Drive Neighborhood is a huge part of his excitement around the business and its growth.

"Being part of this community is really exciting," he says. "This neighborhood is filled with engaged neighbors and lots of kids. People are excited and have been really supportive of what we’re doing. We did quite a few events in the Washington Park area last summer, and we’re really excited to be able to do more of those this year."

Thanks to its growth, Pete’s Pops is currently looking for a full-time chef who will take the lead on recipe development and production of the pops, as well as part-time employees to work events during the summer. Interested parties can email resumes and inquiries to petespops@gmail.com.