PhiloCoffia takes barrel-aged coffee to the next level

Are you a coffee lover who also has an appreciation for bourbon, cognac or tequila? If so, PhiloÇoffia has your number. The new Bay View-based company specializes in barrel-aged coffee that offers up the flavor of barrel-aged spirits without any of the alcohol.

Are you a coffee lover who also has an appreciation for bourbon, cognac or tequila?

If so, PhiloÇoffia has your number. The new Bay View -based company specializes in barrel-aged coffee that offers the flavor of barrel-aged spirits without any of the alcohol.

"The company was built on a love for coffee, as well as knowledge," says owner John Ferrell, who chose the name specifically for its similarity to the Greek word "philosophia," which means "love for wisdom."

Ferrell, a Navy veteran who grew up in Waukesha, says he’s always been inclined to follow his curiosity. It’s a quality that’s led him down one entrepreneurial path after another. In fact, his first business can be traced back to middle school when he purchased and resold blow pops to fellow students to make his lunch money.

"I did a great business, while it lasted," he says. "But things fizzled out after about a month when the vice principal shut me down."

As an adult, Ferrell found his passion in the beverage industry where he got his start working for coconut water trailblazer Zico before moving on to start his own company, Ecos. As he worked more and more with coconut, he began experimenting with coconut oil to preserve coffee beans.

"What I noticed when I ground the beans was a really savory aroma and flavor, with significantly less bitterness when they were brewed," he says, noting that it led him to create a brand called Paleo Coffee, a bottled cold brew made with coconut oil.

But Paleo Coffee was just the beginning. After reading an article about the bourbon barrel-aged coffee from Hawthorne Coffee Roasters, his interest was piqued. So, he did some additional research, noting that the barrel-aged coffee concept was growing in popularity across the nation.

"I couldn’t stop thinking about it," he says. "And I knew I had to start my own company. I bought my first barrels within 72 hours. I was really impressed by the richness and sophistication you could get from the coffee without adding flavorings."

What he found was so compelling, he put his coconut water business on hold to focus on building the coffee brand.

"Bottled cold brew coffee is the fastest growing beverage segment on the market," notes Ferrell. "In fact, coffee has more investment as a food and beverage item than anything else. And right now, there’s nothing like this on the market." 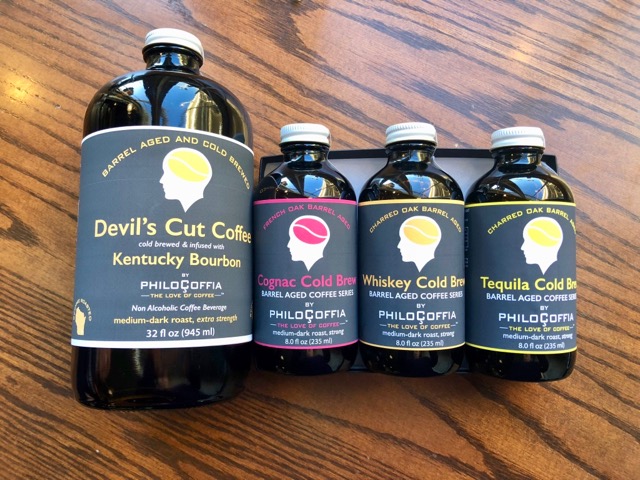 PhiloÇoffia begins with green coffee beans, which are aged in whiskey, cognac or tequila barrels for two to eight weeks. During the process, Ferrell says he adds spirits to the barrels to maintain a desired moisture content and to supplement the flavor of the beans, which gain between ten and twenty percent of weight during the process.

From there, he takes the beans to Ayhan Munzur at Cafe D’Arts in Waukesha, where they are roasted to his specifications. During the roasting process, the alcohol evaporates, but the flavor of the spirits remains. Once roasted, the coffee is brought back to the Lincoln Warehouse. Some is packaged as whole bean coffee. The rest is brewed using a hybrid cold brew process that uses water at multiple temperatures to extract a specific flavor profile from the beans in as little as an hour and a half.

"The process is equivalent to a cold brew pour-over, in terms of the flavor profile," he says. "During more extended contact, you have less ability to control the nuances of the flavor."

Ferrell says he’s excited to see the various ways that people will use the product, which he sees not only as a beverage to be enjoyed straight up, but also in cocktails.

"One of the ways Red Bull took off," he says "Is in bars. It diversified the product in a way that exposed it to a new, younger audience. And this is essentially the coffee version of Red Bull. Add vodka and you get a kick from both the caffeine and the alcohol."

He also sees potential in marketing the process itself to consumers. Ultimately, he says, he has plans to develop a home brewing system that would allow consumers to create a similar product at home.

PhiloÇoffia is currently available locally at Beans & Barley and Outpost Natural Foods Cooperative and as a privately labelled product at Cafe D’Arts in Waukesha. Customers can also order direct at PhiloÇoffia.com or through Amazon.