After three years of renovations, the historic William A. Webber House at 785 N. Jefferson St., will officially reopen its doors on Friday, Jan. 6 as The Phoenix Cocktail Club. But, you can get an early peek at the new digs on New Year's Eve.

After three years of renovations, the historic William A. Webber House at 785 N. Jefferson St., will officially reopen its doors on Friday, Jan. 6 as The Phoenix Cocktail Club, a snazzy new cocktail lounge which will offer Milwaukeeans both creative libations and a menu of internationally-inspired dishes.

But, if you’re interested in an early peek at the new digs, you can get your first taste of new venue during a special soft opening preview on New Year’s Eve.

Beginning at 7 p.m., the new venue will offer a full menu of cocktails, including an Asian mood-inspired riff on the Moscow Mule called "War In Bed," which features sesame washed vodka, Asian spiced ginger syrup, mint, cilantro and soy.

There will also be a special food menu, created by Phoenix Cocktail Club Chef Nathan Heck, whose experience most recently includes four years in the kitchen at Braise Restaurant in Walker’s Point.

The one-night-only menu will include a variety of snacks, entrees and boards priced $5-25. Snacks will include beet chips with blackstrap malt vinegar and orange chili aioli, duck chicharrón with plum sauce and truffle popcorn. Main dishes will include lobster poached in coconut sherry with saffron broth, a fig and rice tadka, fried curry leaves and hazelnut oil, along with a vegetarian bibimbap served up in a traditional stone bowl. 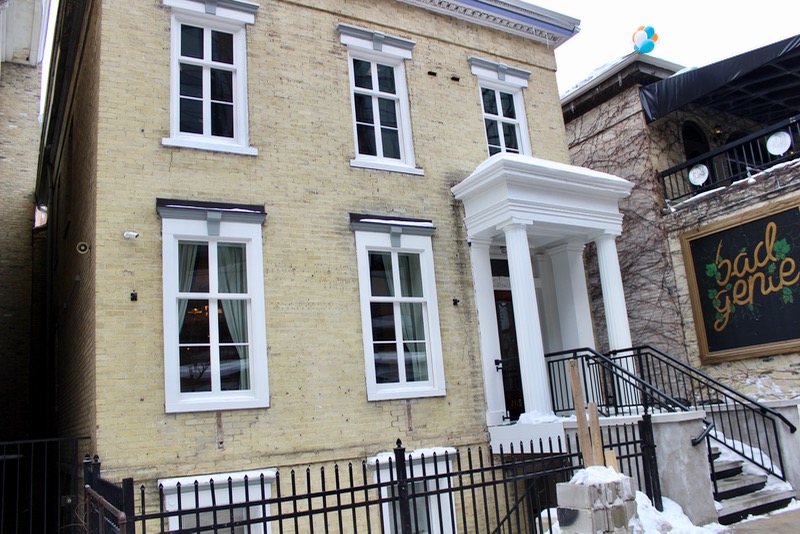 There’s little pretense surrounding The Phoenix Cocktail Club concept, which aims to provide a classy, yet laid back environment where folks can mix, mingle and enjoy well executed food and drink.

Their ambitious collection of cocktail offerings will be overseen by Adam Sarkis, formerly of Braise and Joey Houghtaling, a longtime time bartender and national cocktail consultant, whose resume includes local bars including Blackbird and Lucky Joe’s.

The drink menu – which will feature an expansive list of both classic and contemporary cocktails, slushies and ice cream drinks priced $6-14 – will be broken up into categories including Colors, Slushies and Mood Inspired cocktails, a concept galvanized by the Futurist Cocktail Movement of the 1930s. Twelve bar taps will feature three draft cocktails, along with a selection of beer from Wisconsin breweries.

And it appears there’s an impressive synergy between the cocktail offerings and the food menu.

"The philosophy at the bar is to have a good time … to offer people classic cocktails and fun riffs. And I’ll work the same way. I want to have fun with it and give people food that is new and different," says Heck, who notes that he and Sarkis had a history at Braise of bouncing ideas back and forth and sharing ingredients. "He’s used some of my pickle brines for cocktails, and I’ve used cocktail syrups in what I’m making."

Heck says he’ll start off with a relatively small menu. But, the focus will be on internationally-inspired dishes made with local ingredients. Heck says he’d also like to make use of other interesting locally sourced bi-products as well, including spent mash from Enlightened Brewing Company to use for breads and the dunder from the rum distillation process at Twisted Path Distillery.

"One of the things I love about cooking is going to markets and stores and finding things I’ve never worked with before," he says. "So, the goal will really be to introduce people to new things that they’ve never tried."

Menu items, which will be priced in the $3-15 range, will include snacks, cheese and charcuterie along with salads including duck larb and a ceviche salad. Small plates will include a Southern-style biscuit seasoned with fenugreek and topped with sundried tomato, halloumi, andouille sausage and fig jam as well as fried chicken skins with za’atar, labneh and burnt lemon cashew chutney.

Bowls will include a curry dish (Indian, Thai, Jamaican and Japanese) as well as a dish using one of the seven traditional Mexican moles. Bibimbap will also be a regular offering, and will feature additions that reflect Heck’s interest in housemade ferments, including kimchee and kraut.

Desserts will include offerings like Szechuan gingersnaps and doughnut holes with various toppings and fillings.

From tiki to beer dinners

Beginning in February, Phoenix will also roll out Tiki Tuesdays, during which the bar will serve up special tiki cocktails alongside a special menu of Hawaiian and dim-sum inspired dishes.

According to Heck, the venue also plans to roll out a series of beer, wine and cocktail dinners which will likely be held on Monday evenings.

Beginning Jan. 6, the Phoenix Cocktail Club will be open Tuesday through Saturday from 4 p.m. to close, with a full menu served from 4 to 10 p.m. and a more limited menu served after 10 p.m. Happy hour will be held daily from 4 to 7 p.m.