Does Portillo's taste as good outside of Chicago? We dine and dish

Milwaukeeans are warming up just swimmingly to the Chicago-born Portillo's concept in Brookfield - a good thing since a new location is on its way to Greenfield. But how is the food? We sampled some of the fast-casual chain's most popular items.

Judging from the seemingly incessant line of cars waiting at the drive thru, as well as the full restaurant we witnessed last week on our visit, it seems that Milwaukeeans are warming up just swimmingly to the Chicago-born Portillo’s concept in Brookfield at 17685 W. Bluemound Rd.

And that’s a good thing. After all, it looks like the second Wisconsin location is already on the docket for the swiftly growing fast food chain. The Greenfield plan commission has approved plans for a 9,000-square-foot restaurant as part of the 84South development at 8705 W. Sura Lane. Provided the plan passes muster at today’s Greenfield Common Council meeting, the restaurant is expected to break ground in the new location this fall.

But I’m getting ahead of myself. After all, I’m here to give you the skinny on my first visit to the fast-casual restaurant with the almost cult-like following … during which I sampled as much food as I could, with a little help from two of my colleagues.

But first, let me come clean on something: I’m not a Portillo’s devotee. Yes, I’ve eaten their food, and I’ve enjoyed it. But I’ve done it in Chicago. And I believe pretty firmly that some foods simply taste better in their places of origin. So I went into Portillo’s with moderate expectations. 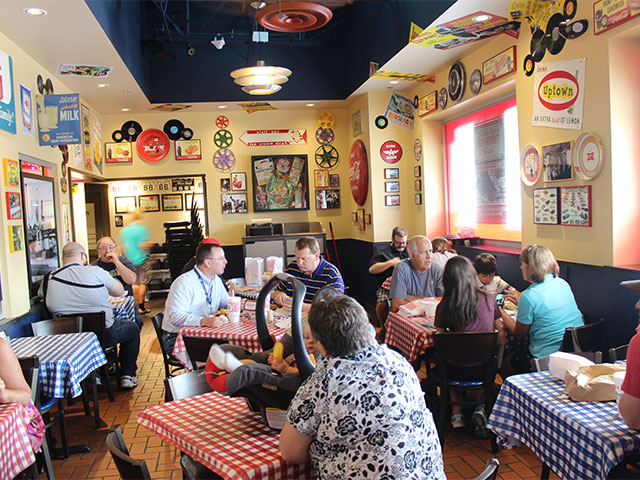 For those unfamiliar with the Portillo’s menu, it contains a selection of Chicago-style hot dogs and sausages, sandwiches, char-grilled burgers and Italian beef. A feature in Brookfield that currently exists at no other location is the Badger Brat featuring a Usinger’s bratwurst with sauerkraut and mustard. There are also salads, ribs, sides (including onion rings, fries and a fruit cup) and desserts including chocolate cake, strawberry shortcake and chocolate eclair cake. Among beverage options, the Brookfield location also offers beer and smoothies.

It’s useful to note that ordering takes place at a central location where customers are asked to form two lines. However, order pick-up is divided – with salad picked up at a station on the east side of the restaurant and grilled items and alcohol on the west. On our trip to the restaurant, it took roughly 25 minutes to wait in line and pick up our food before sitting down to eat. 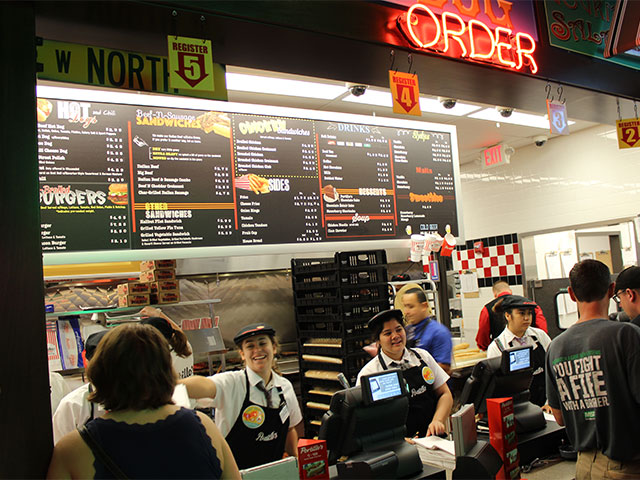 Here’s what we tried, along with a few impressions. 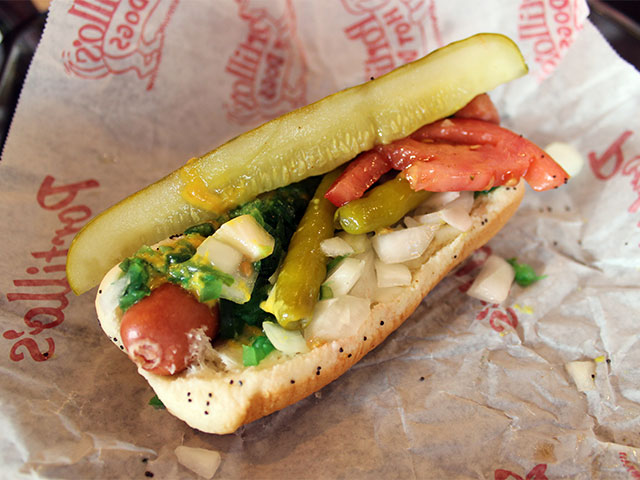 Yes, we ordered it with everything. That includes mustard, relish, celery salt, freshly chopped onions, sliced red ripe tomatoes, kosher pickle and sport peppers on a soft steamed poppy seed bun ($2.99). It’s a relatively petite dog, even with all the fixings, so order two if you’re hungry. Or opt for the jumbo dog for an extra $0.36.

The verdict? It was good. And yes, the custom blended Vienna beef dog is tasty. But there are other spots in town to get a Chicago-style dog, so this one item alone wouldn’t necessarily draw me out to Brookfield. But if it's what you're craving, go for it. 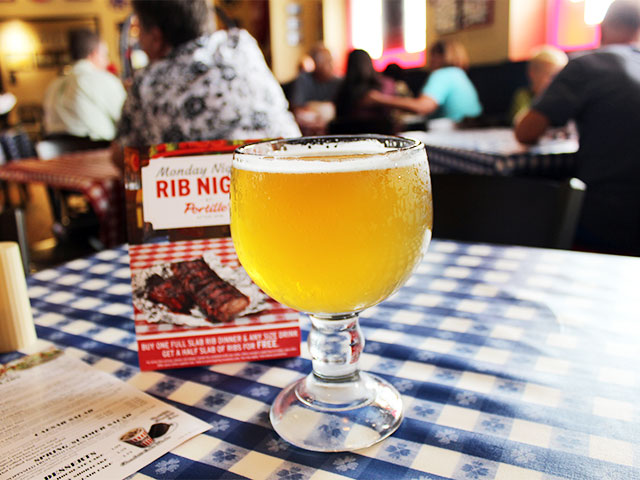 Yes, for $5.25, you can also get a schooner of Spotted Cow. And that’s kind of cool. After all, when’s the last time you drank out of a schooner? 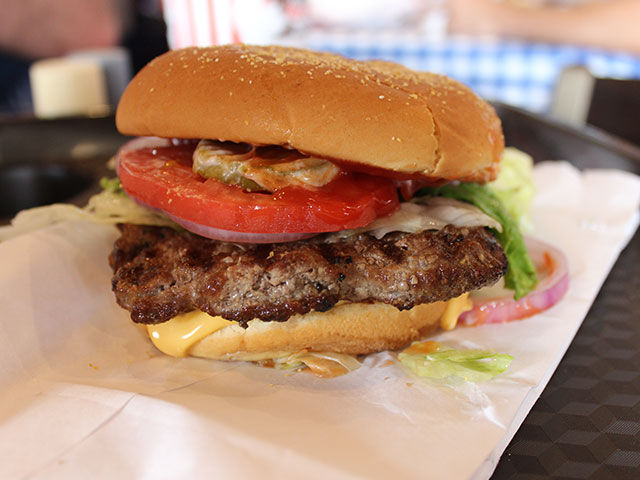 For $4.65, you get a ⅓-pound of beef with mayo, crisp lettuce, a tomato slice, sliced red onion, pickles and ketchup served on a toasted bun. For $5.20, you can add cheese, as we did.

Honestly, I think the burgers at Portillo’s fly pretty far under the radar. But they shouldn’t. The burger’s flavor was good (charred just enough for flavor), the sauce-to-ingredient ratio was close to perfect and, all-told, it was a pretty delicious burger. 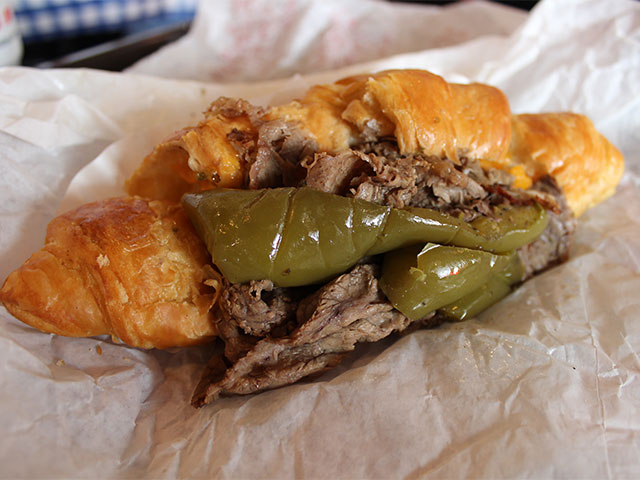 Italian beef layered with cheddar cheese and served on a toasted croissant ($5.89).

If you’re going to go to Portillo’s, getting the Italian beef is a good bet. We ordered ours with sweet peppers and extra gravy. And it was good. No, make that very good. But maybe not quite as good as the combo with Italian beef and sausage. 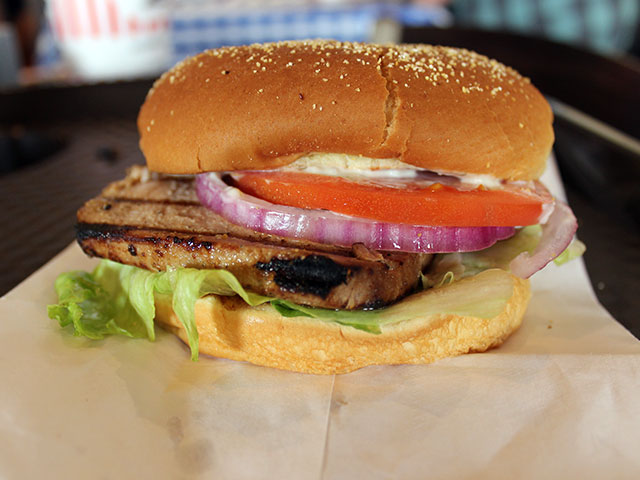 This was the first time I tried the Portillo’s grilled tuna sandwich (an option about which I've heard others wax poetic), and it will probably be the last, largely because, if I’m going to eat tuna, I’d prefer it to be a nice fresh filet that’s beautifully rare in the middle. And this is not that. But Portillo’s is a fast food joint, so I wasn’t expecting a life changing experience.

Unfortunately, the fish itself wasn’t great. When I tried a piece on its own, I noted that it had a pleasant charred flavor from the grill, which was good, but it was also a bit fishy, much like the sub-par frozen tuna steaks you buy all across the Midwest in grocery stores. Eating it intact as a sandwich (with nice flavor from the onion and tartar sauce) made it palatable. But this was the one sandwich I could do without ever eating again. 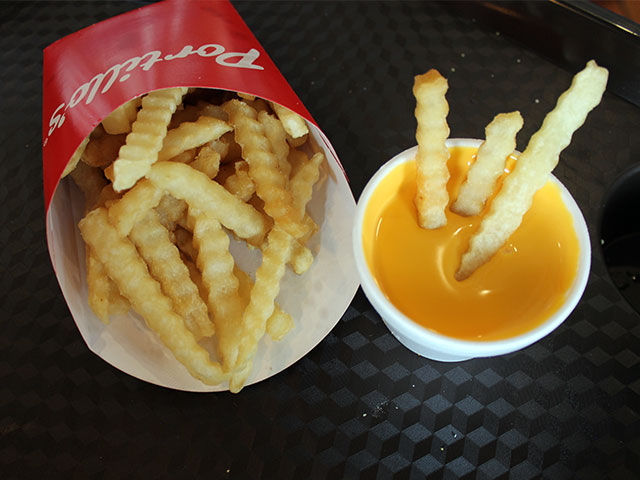 Sure, the French fries are the frozen crinkle-cut kind you can find just about anywhere. But they were perfectly crisp. And the texture assists immensely with their ability to hang onto just the right amount of cheese sauce. So, sure. Splurge for the cheese fries ($3.04 for a large). You’re at Portillo’s, after all. 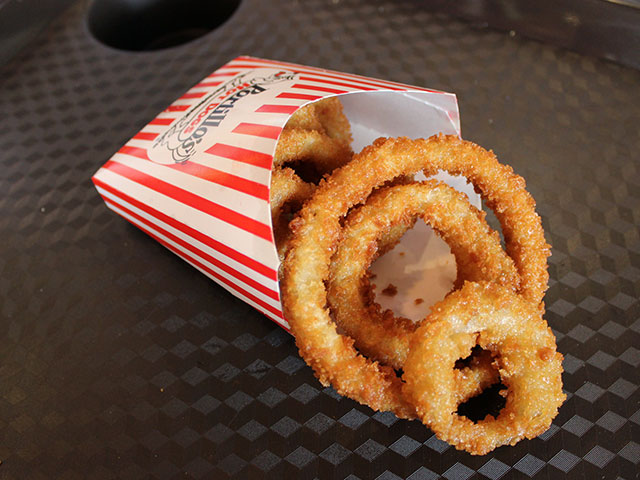 Or you could opt for their crispy onion rings ($2.29), which also aren’t a bad choice. They’re crisp on the outside and tender on the inside. And there are real onions in there, not the pureed bits some fast food joints try to pass off on unsuspecting folk. 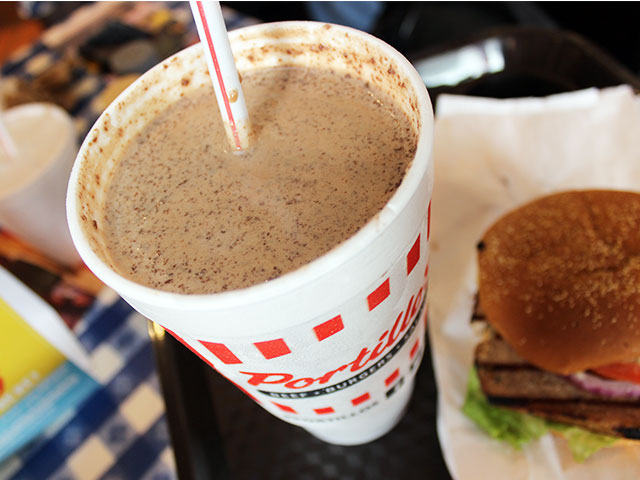 This was one thing I was eager to try – mostly to see if it lived up to the hype. After all, Portillo’s makes a pretty solid chocolate cake. So how could a slice of that cake paired up with ice cream and blended be bad? It isn’t. This blended beauty is smooth and airy with plenty of flavor, but no clumps to glob up your straw. A large will set you back $4.65, and that’s a deal considering it’s super filling. On a carefree day, I’d happily drink it alongside an order of onion rings for the perfect junk food meal.

Do I still feel like Portillo’s tastes better in Chicago? I’ll admit I do. But I’ll also concede that even in Wisconsin, Portillo’s offers up a solid, impressively consistent menu of comfort food favorites that are worthy of at least some of the hype.