In this series, we're focusing on one of Wisconsin's claims to fame: cheese. You won't be able to resist following along as we showcase some of the area's ooey-est, gooey-est and cheesiest dishes. And - during bar month - we'll be pairing them with complementary spirited accompaniments.

This article originally ran on March 6, 2018, but in honor of National Cheese Day – a holiday near and dear to any Wisconsinite's heart – we've rerun the article. Dig in!

In this series, we’re focusing on one of Wisconsin’s claims to fame: cheese. You won’t be able to resist following along as we showcase some of the area’s ooey-est, gooey-est and cheesiest dishes. And we’ll be pairing them with complementary spirited accompaniments.

The inspiration for this series was actually sparked when I headed over to Joe Mama’s Bar & Grill to try out the burger a few weeks ago [you can read more about that here]. As I perused my burger options, I found myself rapt by all the cheesy goodness on the menu. From housemade macaroni and cheese to reuben rolls, nachos and dynamite sticks (wonton wrapped pepper cheese), there are countless ways to sample one of Wisconsin’s most beloved staples.

I’d heard via the social media grapevine that Joe Mama’s fried cheese curds were some of the best around, so I decided it might be a good idea to try them out.

And so I ordered up a basket of the Lake Five Cheese Curds, which the menu describes as "little pillows of cheesy heaven" ($7.95). To go alongside, I ordered a glass of Lakefront’s Riverwest Stein, an amber ale with notes of citrus and grape, a bit of grassy hops and an almost oak-like edge. In my book, it’s a great all-purpose brew, which can be enjoyed with a good number of dishes. And it has a deep flavor that stands up nicely against the saltiness of cheese curds. 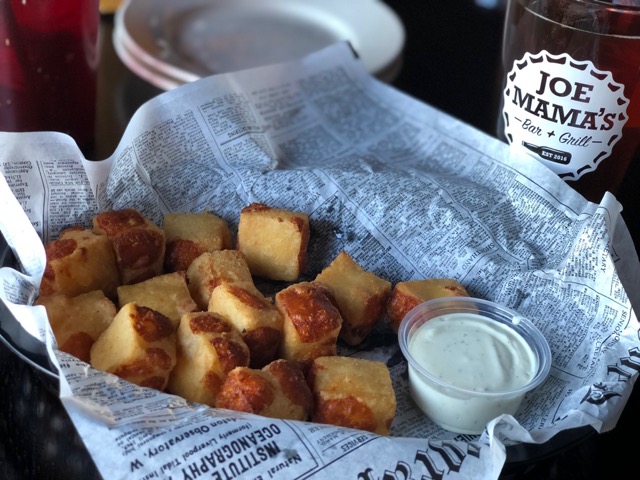 Now, the first thing to note about these curds is that they’re not really cheese curds, per se. Instead, the Lake Five Cheese Curds are actually cubes of lightly breaded fried cheddar. So they don’t have quite the same texture as a more traditional fried cheese curd. But that doesn’t make them any less delicious. After all, this is fried cheese we’re talking about.

Instead, they’re creamy and melty with a gentler pull than a curd. They’re crisp on the outside and gooey and cheesy on the inside. And they harbor a distinct flavor that’s pretty much a dead ringer for a grilled cheese sandwich. They’re nice dipped in Joe Mama’s ranch dressing; but I didn’t mind eating them as-is, with a bit of beer to chase down the saltiness.