It's Opera Week with the opening of three different productions

It's Opera Week in Milwaukee, with three vastly different performances opening over the same weekend, ranging from the most traditional to an opera with a puppet as a star, to a production of a light opera with the oddest collection of instruments.

Two of the big cornerstone groups of the United Performing Arts Fund will be joined by an upstart in opening three pieces that range from the most traditional to an opera with a puppet as a star, to a production of a light opera with the oddest collection of instruments you’ve ever heard.

The venerable Florentine hits the stage at the Marcus Center with the classic "Don Giovanni," the Mozart tale of the antics of one of the most seductive and non-selective lovers of all times.

It tells the tale of Don Giovanni, a womanizing scoundrel, who executes his devious conquests and hijinks only to be called by the fates for his transgressions.

Da Ponte’s libretto and Mozart’s brilliant score reveal the human condition and all its foibles.  This production is a revival of a 10-year old production that was received with great critical acclaim both in Milwaukee and in cities around the country.

The production is being directed by John Hoomes, the artistic director at the Nashville Opera and the man who directed the Grammy-winning "Elmer Gantry" for the Florentine. Maestro Joseph Rescigno will direct the orchestra, while Milwaukee’s brilliant Noele Stollmack will light the production.

The production will also feature Milwaukee native Emily Fons, who attended UWM before moving on to have a wonderful career both in the United States and abroad. She has sung the role of Zerlina before but will sing Donna Elvira in this production. She is a mezzo but will sing the soprano role for Florentine.

"Don Giovanni" will only run for two performances, Friday at 7:30 p.m. and Sunday at 2:30 p.m. Information on tickets is available at Florentine’s website.

A giant puppet, all eight feet of him, will be the centerpiece when Skylight opens a brief run of "The Beauty and the Beast" (Zemire Et Azor), the French 18th century opera by Andre Gretry.

The show marks the final out-of-the box production programmed by Viswa Subbaraman, the daring artistic director who resigned before the season began. Subbaraman was known for bringing little known work to Milwaukee, decisions met with an occasionally mixed reaction, both from audiences and from his board.

The puppet was built in the Skylight prop shop under the guidance of Lisa Schlenker, the company properties director. It will be operated onstage by four actors and is expected to be a fully articulated construction that will add an element of "wow" to the production.

Ortiz is a creative force in the world of musical theater, and for this production, he will direct in addition to designing the puppets and sets, working on the adaptation and completing a translation for the story.

"The Beauty and the Beast" only runs through March, March 26. Information on showtimes and tickets is available at the Skylight website. 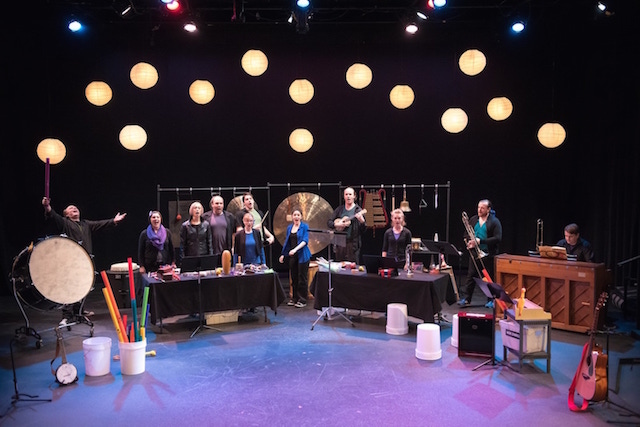 And finally, the plucksters at Milwaukee Opera Theatre will restage "The Mikado" with a totally unique approach that includes a wild variety of instruments and noisemakers.

My preview of the opera ran last week, and music fans in Milwaukee responded with great acclaim the last time this "Mikado" hit the stage.

The production at Next Act Theatre runs through March 26, and information on showtimes and tickets is available at the MOT website.