No, Scott Walker, professors' pay is not the problem

Walker's recent response concerning the vote of no-confidence and attack on professors' pay is insulting - not to mention misleading with its numbers on faculty pay and the number of students most UW instructors teach.

Faculty at UW-Milwaukee have joined those around Wisconsin by voting no-confidence in UW System President Ray Cross and the mostly-Scott Walker political appointees who make up the Board of Regents, including the former frac sand mining lawyer/Walker donor/regent who’s helped lead the way in rewriting tenure rules.

Walker responded by insulting our state’s top researchers as (paraphrasing now) overpaid, groaning fussbudgets who barely interact with students, and also by putting out misleading numbers on faculty pay and the number of students most UW instructors teach.

This is too serious an issue for this nonsense; the UW System is too important to the state’s future. As for professors’ pay, I thought conservatives supported people getting paid more if they worked hard, achieved more and attained terminal degrees? What happened to the American dream? Is the governor now arguing that everyone should make less than $50,000 a year, forever, no matter their degree of achievement and education? Isn’t that rather Marxist?

He does realize one of the top researchers in macroeconomics researches at Madison, right? Should he get $50,000, too? I am sure he would leave. That’s called free-market competition.

It occurs to me that Walker himself earns about $70,000-$100,000 more on the taxpayer dime than many full-time UW instructors, and about $47,000 more than the "full professors" at UWM whom he derided Tuesday. Bizarrely, in attacking full professors, he's singling out for derision the group of people who have achieved the most. Seems rather antithetical to stated conservative principles.

Walker also said that faculty teach an average of 2.8 students, but UWM's spokesman tells me that the number is actually 29 students per faculty member. Furthermore, the spokesman said, in 1994, the average was 21 students per faculty, so professors at UWM are teaching more students on average. The number only includes professors, not instructional academic staff (who often teach more classes than professors, who research as part of their jobs), but UWM PR says the number is well over Walker's faculty average if you include non-faculty teachers too.

It’s not that I think there should never be fiscal study nor potential reform in a system this large; it’s that I don’t think it should be built on facile, insulting rhetoric about greedy, lazy professors. Who decided research is inherently bad and why, anyway? Republicans like Tommy Thompson didn’t think that way. The cuts have been too big and too fast; any reform should be carefully studied over time with all stakeholders, not built on misleading rhetoric.

At least one legislator previously threatened to retaliate against UW for such professorial no-confidence votes with more "reforms." Such political attacks on professors’ free speech prove the need for strong tenure protections. If legislators now retaliate for this, they are proving the point.

Even worse, these ideological attacks are completely removed from the realities on campus, where diverse, talented students are striving to better themselves every day and innovative research is going on and important service performed. At UWM, that includes the most veteran students of any four-year university in a six-state region.

I see no evidence at the classroom level whatsoever that these reforms have been good. Rather, I see talented students succeeding against the backdrop of a destabilized environment, plummeting morale, rancor, outdated classrooms, declining resources, minimal technology and course offerings. (I am a senior lecturer who taught 10 classes this year at UWM, counting summer, by the way. My opinions are my own and do not represent UWM.)

Tenure is not, as Walker told the media, designed to be a "job for life." It’s designed to protect professors’ freedom of speech and academic freedom – which conservatives correctly champion when it comes to Marquette Professor John McAdams, but wrongly ignore when it comes to professors whose ideology they dislike. And sometimes vice-versa.

Republicans engineered budget cuts so fast and big that it almost seems like part of the motive was to force administrators to monetize everything, using weakened tenure provisions to cast aside the liberal theorists whom conservatives consider ideological foes and whose research they, thus, devalue as nonessential (or to hope they would leave on their own). I’d like to argue it’s not political, but it’s hard to do so when so much of the rhetoric centers around the perceived liberalism of professors.

I would note that I get the importance of and champion diverse ideological views being welcomed on campus and am deeply troubled that they are not always. Some of those professors I am now defending have called me names in the past, so I am well aware they might not defend my own academic freedom. This is also very wrong; however, on principle it’s important to defend academic freedom. For all. Period.

You can’t reverse engineer ideological tolerance on campus through massive, too-quick budget cuts and misleading rhetoric that ultimately hurts students and the state. You can’t use government power to target ideological foes to silence them. Well, I guess you can, but it’s wrong.

Professors have every right to raise concern about the Republican changes – which have damaged the System’s national reputation and ability to recruit and retain faculty, as well as caused reduced resources for research and students – and they shouldn’t have to fear retaliation from politicians because of it.

Professor-Republican ideological wars are bad for our state and students and distract from reasonable, thoughtful, long-term study with all stakeholders about whether any fiscal reforms or restructuring is needed in light of enrollment drops at some universities (versus, say, concerted efforts to grow enrollment at them. The Republican "reforms" aren’t helping).

Assuming there’s bloat in the UW – and in a budget this size, I’m sure there’s some – where’s the evidence that it’s concentrated in the instructional/research ranks since the rhetoric is fixated there? UWM allocates 46 percent of expenditures to academic units. Perhaps the bloat, if it exists, rests outside of them (administration, support services, etc.), not in the ranks of sometimes-liberal theorists whose research offends Republicans. Since Republicans have a pro-management mentality and grew the power of administrators, I doubt you’ll hear that talked about much. Of course, this would need careful study.

Furthermore, value should not be solely monetized in a forward-thinking society. Do we really want to deem research into history, poetry and philosophy as non-essential because it’s not a big revenue producer? (The past informs the future.) I think some Republicans would prefer if UW became the functional equivalent of a technical school or Phoenix University (or Trump U!).

Think that’s unfair? Listen to what they say. They envision a strict for-profit workforce development mission with a bunch of at-will, underpaid employees who don’t research. However, all states for decades have also accorded intrinsic value to disciplines that seek societal betterment. I prefer the balance we have at UWM now: a blended mission between research and workforce development (and remember not all UW schools are research universities anyway and that many researchers also bring in lots of grant money).

Ironically, it’s the workforce development mission most at risk as a result of Republican cuts: ad hocs that bring industry ties into classrooms who might not be renewed and student workers whose jobs are on the line. Almost no one talks about this. Seems counter intuitive, but this was completely predictable if you understand the power structure in the UW System. And for the record, I think UWM’s Chancellor Mark Mone and my dean, Rodney Swain, have done a valiant job dealing with the mess thrust in their laps by the legislature. I respect them, and I think they respect differing viewpoints and the blended mission.

And don’t say they haven’t tried to cut. UWM’s chancellor says the university has cut $26 million in spending. Walker doesn’t acknowledge this in his statement. And don’t say there’s a huge slush fund squirrelled away. That’s gone. Heck, in my department, we don’t even have office phones anymore.

Walker, in his statement Tuesday attacking UWM professors for uttering what he called a "collective groan," said full professors averaged $101,700 pay in 2013-14, well over annual pay for all Milwaukee County workers, which he pegged at $49,539. This is extraordinarily misleading for several reasons, in addition to being classic class warfare: 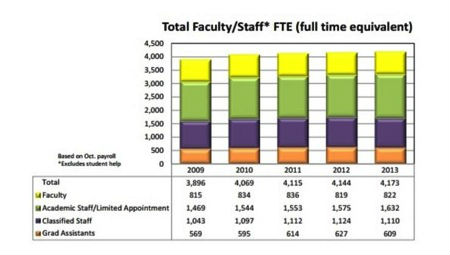 Milwaukee and Madison are also outliers, system-wide. I looked up all full-time instructors' salaries for each UW school as published by the Chronicle of Higher Education for 2014-15:

Walker also says that cost per student is up. I presume he’s using enrollment drops to get there, since UWM had a $40 million budget deficit. He makes no note of the millions they’ve cut in the last year. However, I’d note that state spending to UWM has plummeted, according to this UWM chart: 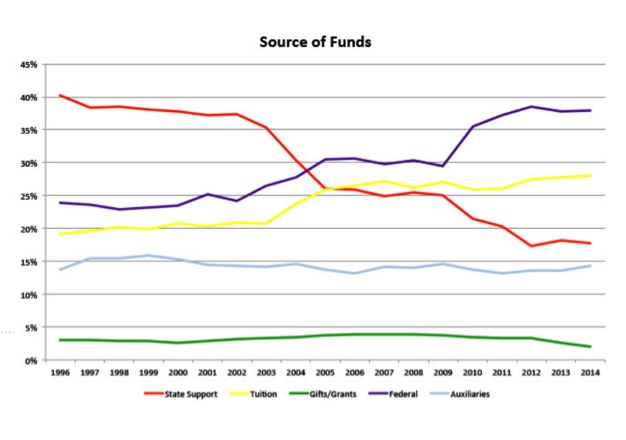 Walker also makes a big deal about tuition costs, and I do think they are a concern, as is overall college affordability. I supported his tuition freeze. However, UWM ranked 12th among peers in tuition costs. For example, students in Illinois pay a lot more.

He claims faculty have 2.8 students. He must be focusing on the sliver of people hired solely to research in the sciences, or something similar, to skew the number, because it’s a ridiculous figure when you consider academic staff (and I don't know a single professor who teaches that few students). And UWM PR says it's completely wrong.

In my department, class sizes usually range from 15 to over 150 (this semester, 80 students are enrolled in my classes). He might argue, but I’m just talking about professors! Well, that’s misleading, since the budget cuts affected the entire university and professors are upset about more than just tenure (furthermore, some academic staff have a tenure equivalent also weakened).

Walker called tenure "job for life," but it never has been. Professors could be fired for just cause before. And it’s very hard to get tenure.

The legislature created this crisis by plowing a surplus into more tax cuts and then announced it needed to fix it by insulting the people now voting no-confidence in the people not fighting back hard enough.

I fear politicians of any party (or their donors/political appointees) being the ones to dictate "what is intellectual value." Somehow I don’t think Republicans would be targeting the UW System if most professors were conservative and writing endless treatises supporting their ideas. Think about it. I’d be just as upset if the shoe were on the other foot.