Something big is coming. And it promises - not only to bring people together in celebration of life and German culture - but also to reinvigorate an urban plaza many have grown to see as a useless eyesore. Are you ready for the largest Oktoberfest in Milwaukee history?

Something big is coming. And it promises to reinvigorate an urban plaza many have grown to see as a useless eyesore.

Restaurateurs Craig Pruscha and Hans Weissgerber III have proposed plans for what they are calling "The Largest Oktoberfest in Wisconsin’s History." And, if all goes well, the free 11-day celebration will take place Sept. 28 through Oct. 8, 2018 on MacArthur Square.

"There’s a longstanding tradition of Oktoberfests in Wisconsin," notes Pruscha. "Even so, despite the fact that Milwaukee was the beer capital of the world at one point, we really don’t have an Oktoberfest that really does the city justice."

The event would take inspiration from the annual Oktoberfest Weissgerber has hosted at Pere Marquette Park. However, the scope for the new improved Oktoberfest is far more grand.

"The whole idea of Oktoberfest in Munich is that it’s a family event," notes Weissgerber. "It’s about socializing, meeting people. And there are nuances to creating this event that will be focused on making that happen." 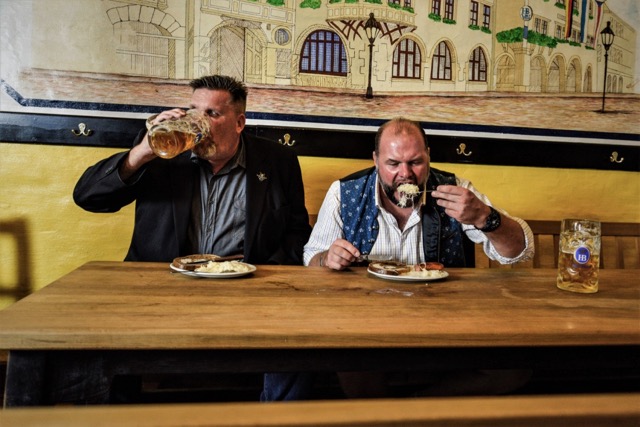 The event is about more than a grandiose German festival. Thanks to a proposal put forward to the city of Milwaukee to host the event at MacArthur Square, Oktoberfest harbors the potential to have a huge impact on Milwaukee’s Downtown.

"The space itself is modeled after the city centers (zentrum) found in virtually every German city," notes Weissgerber. "They’re big green spaces, surrounded by government buildings beyond which you’ll find the city’s business district. Holiday celebrations are hosted there, the Christkindlmarkets. Even the architectural styles are a reflection of Milwaukee being a true German city."

MacArthur Square, which may once have had promise of anchoring Milwaukee's Civic Center, has sat largely vacant for the past 50 years.

A visit to the plaza on any given day reveals signs of a space forsaken: broken tree limbs, unkempt grass and gnarly bushes filled with trash. Formerly grand fountains are now still mephitic ponds filled with fowl feathers and feces. In fact, the square, located just east of the courthouse is likely more recognized for the parking structure that tunnels beneath it. 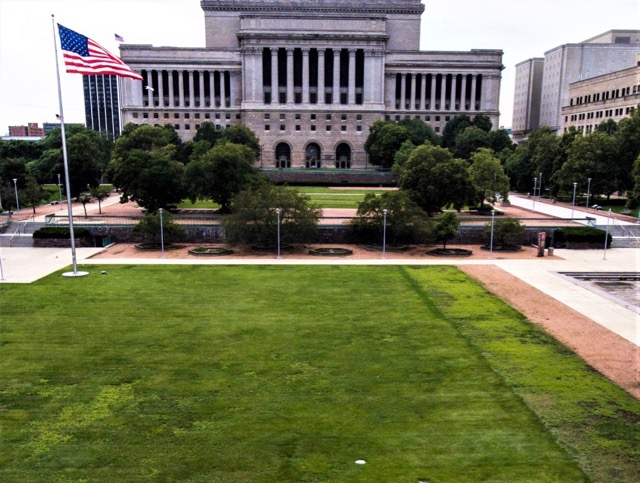 Flanked by numerous points of interest including the Milwaukee Public Museum, the Milwaukee County Courthouse, the Safety Building and the Police Administration Building, the plaza was once home to a number of Milwaukee landmarks. Designated with a historic marker on Sept. 17, 1945, the area was meant to pay homage to native Milwaukeean Gen. Douglas MacArthur for his leadership of Allied forces in the Pacific during World War II.

A three-legged clock tower featuring a 5,000-pound timepiece and dioramas of historic Milwaukee scenes that had been donated by the Schoenleber family, founders of the Ambrosia Chocolate Company, once adorned the square; but was torn down in 1990. Even the statue of Gen. Douglas MacArthur was relocated to the lakefront in 2014.

"We’d really love this event to be a way to reinvigorate MacArthur Square," says Pruscha. "It’s been so underutilized, and it’s a beautiful space. Everything is steel and stone, but it opens up to the city. The park has a fascinating history and so much potential."

Weissgerber says the event is also centered on the idea of unifying Milwaukee, creating an event that brings all sorts of people together in a fun, celebratory atmosphere.

"When you go to Oktoberfest in Munich and stand and look across the sea of thousands of people," he says, "everyone is having a good time. Above the sounds of the band playing, you hear laughter and conversation and glasses clinking. It’s a cultural festival. People who’ve never met are spending the day together. And it’s about eating and drinking and celebrating life."

Pruscha agrees. "We’re really investing in this event," he says. "The first year will be all about creating infrastructure and building an event that can be sustained for years to come."

"I’ve always had a passion for big events," says Pruscha, who also founded The German Christmas Market of Oconomowoc, "And this is a case of go big or go home. Our goal is to make Milwaukee the U.S. home for Oktoberfest."

Watch OnMilwaukee for additional details about Milwaukee's newest Oktoberfest as they develop.