At an event at the University Club on Monday, the Public Policy Forum released a report that looks at how the City of Milwaukee raises revenue and compares that to how 38 peer cities do it.

At an event at the University Club on Monday, the Public Policy Forum released a report that looked at how the City of Milwaukee raises revenue and compared that to how 38 peer cities do it.

The PPF's Rob Henken kicked off the event with an introduction, explaining that the research compared Milwaukee to cities with populations between 300,000 and 1 million:

What the report – which can be downloaded and read here – found was that Milwaukee was first, by far, in the country among the group in terms of relying on property taxes. In fact, property taxes are nearly the only source of local tax revenues in the city. Minneapolis was a distant second at 73 percent. 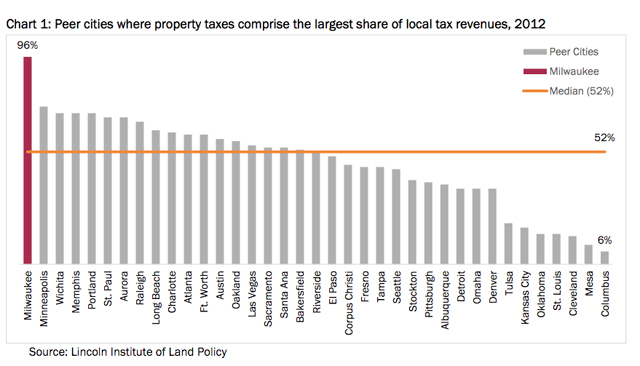 Henken used the Milwaukee Police Department as an example of how the combination of relying on property tax – the amount of which can be raised is limited by state law – and the state's stagnant shared revenue contributions to the city hurts Milwaukee.

In 2011, MPD funding was $236.9 million. That number was $255.8 four years later, eating up pretty much any new revenue growth during that time. And, as Henken pointed out, this led to no growth, only maintenance. MPD personnel actually fell by eight positions during the same period.

The report is a companion to 2016's "Making Ends Meet," which studied spending by the city.

Here are four takeaways from the report, as presented by Henken at the event:

Finally, the report created models based on four of the peer cities – Minneapolis, Cleveland, Kansas City and Pittsburgh – showing ways the city could diversify its revenue streams and potentially create a more equitable and reliable funding model to help ensure future growth. Among the means included in these models are taxes on income, retail sales, entertainment, hotels, restaurants, parking and services.

After the presentation, Henken moderated a panel discussion that included (from left to right in the photo below): 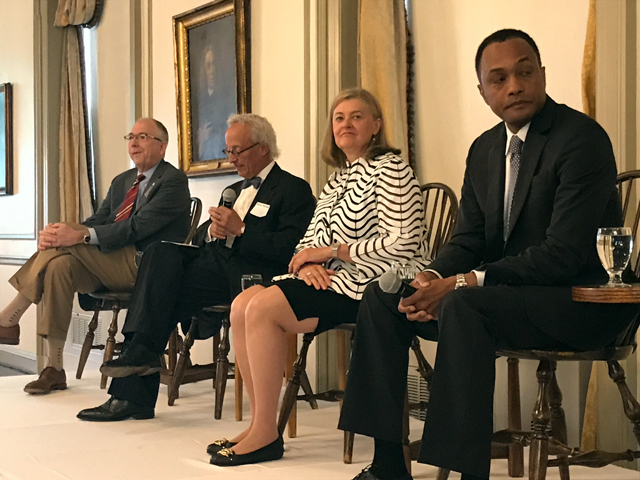 Here is some of that was said:

Alex Molinaroli: "What strikes me is the lack of control the city has of its own future, because of how the rules are set. Diversification gives you more control. We have a structural problem. I think there’s an opportunity to come up with a better solution. There’s a win-win in here somewhere.

"I have no idea what the political process is, but I do know this: The city needs to have a single voice; to decide what we agree on. It takes some time, but if we do understand the issues, there is a lot of common ground and we can go to Madison united."

Greg Wesley: "I’d like the debate (to be) around which of those taxes would be able to attract more residents to the city of Milwaukee."

Julia Taylor: "I think this is a longer-term discussion; a long-term fix for the growth of a healthy city. If we want to look at a more equitable process, I think more residents would be willing to go along with a slightly higher sales tax if (property tax) is reduced."

Barry Mandel: "I think we have to tread carefully on an income tax. The sales tax is a no-brainer, and have non-residents who use the investments we’ve made in our city pay their share. As part of the process, we have to take a look at the revenue streams of the state, the county and the city."

At the conclusion of the panel, Mayor Tom Barrett spoke briefly, too, saying that the budget delay in Madison has created an opportunity and an urgency to act quickly.

"Where I diverge from the great work that Rob and his team have done, I realize we don’t have a perfect world," he said. "My issue is not a hypothetical world, my issue is right now. I think we might have a week or two to have a discussion. We have plenty of time. I’m not joking.

"Even if the council or I wanted to talk about a tax, we are barred by state law to do that. We have absolutely no legal ability to do that. The state controls the lever(s). This is a serious issue, but we’re not past the point of no return."

Finding the good in local government

Milwaukee streets are a disaster