The newly revamped Pulaski Park on the South Side has sculptural benches, new futsal and basketball courts, a shiny new playset, a new bridge over the Kinnickinnic River and more. But perhaps the most exciting feature of the park at the moment is the newly restored river bed and banks.

Standing just off the corner of 16th and Windlake stands the Polish hero of the American Revolution, Casimir Pulaski, in a life-size rendering by artist Joseph Kiselewski, atop a 17-foot base.

Since early 1932 when the statue was inaugurated, Pulaski has stood sentinel in the park that bears his name.

Meanwhile, the neighborhood around him – which has changed over the years from heavily Polish to having a large Latinx population – has continued to use Pulaski Park. 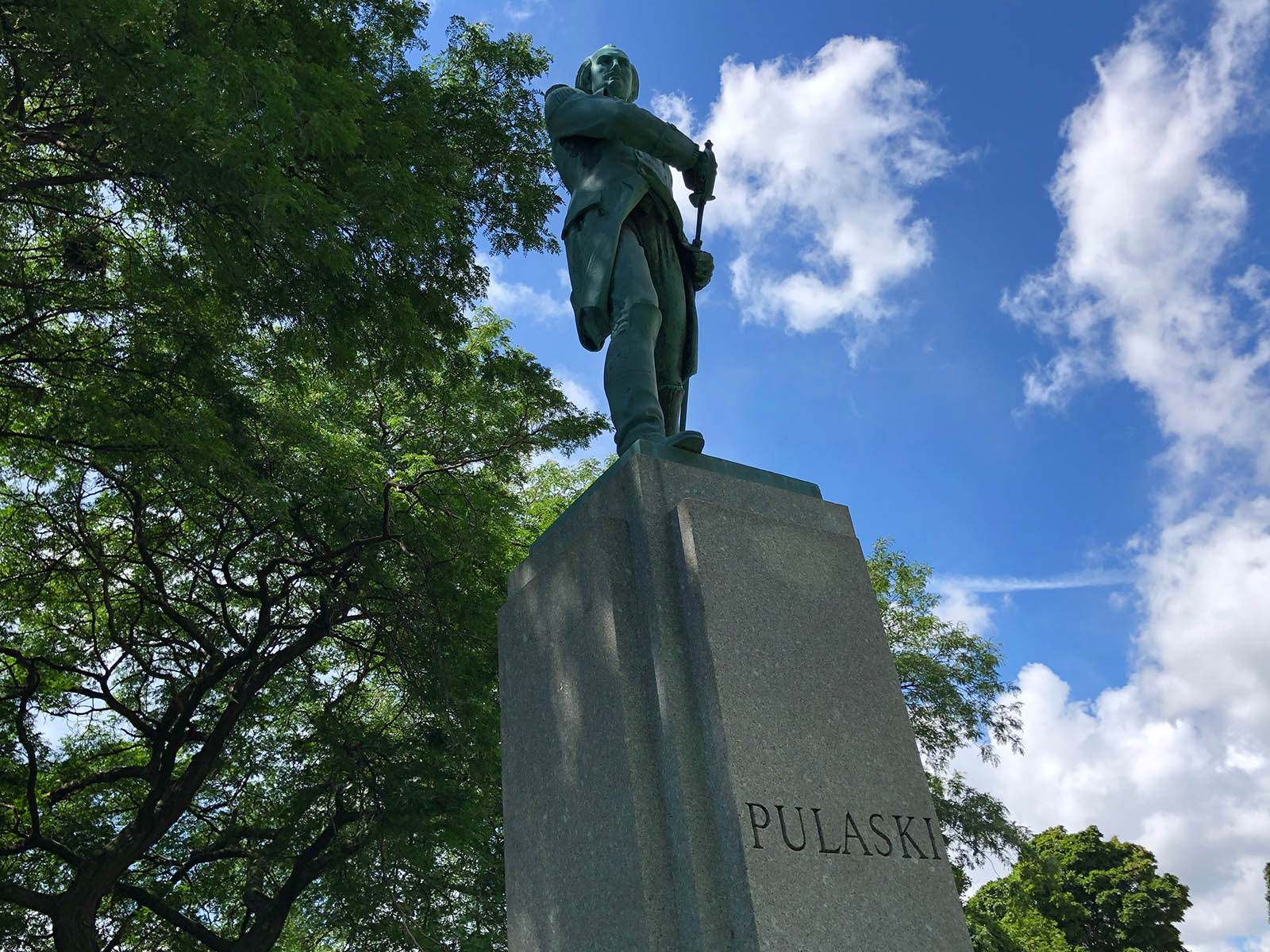 For decades it was a center of local baseball action and nowadays it has a wide variety of facilities, including futsal and basketball courts, and a shiny new playground, just across the bridge from a striking 1930s bathhouse, pictured below.

There are also colorful Marina Lee-designed sculptural benches throughout the 26-acre park, which occupies space from south of Cleveland up to Windlake, between 16th and 20th Streets (it's not to be confused with Pulaski Park in Cudahy). 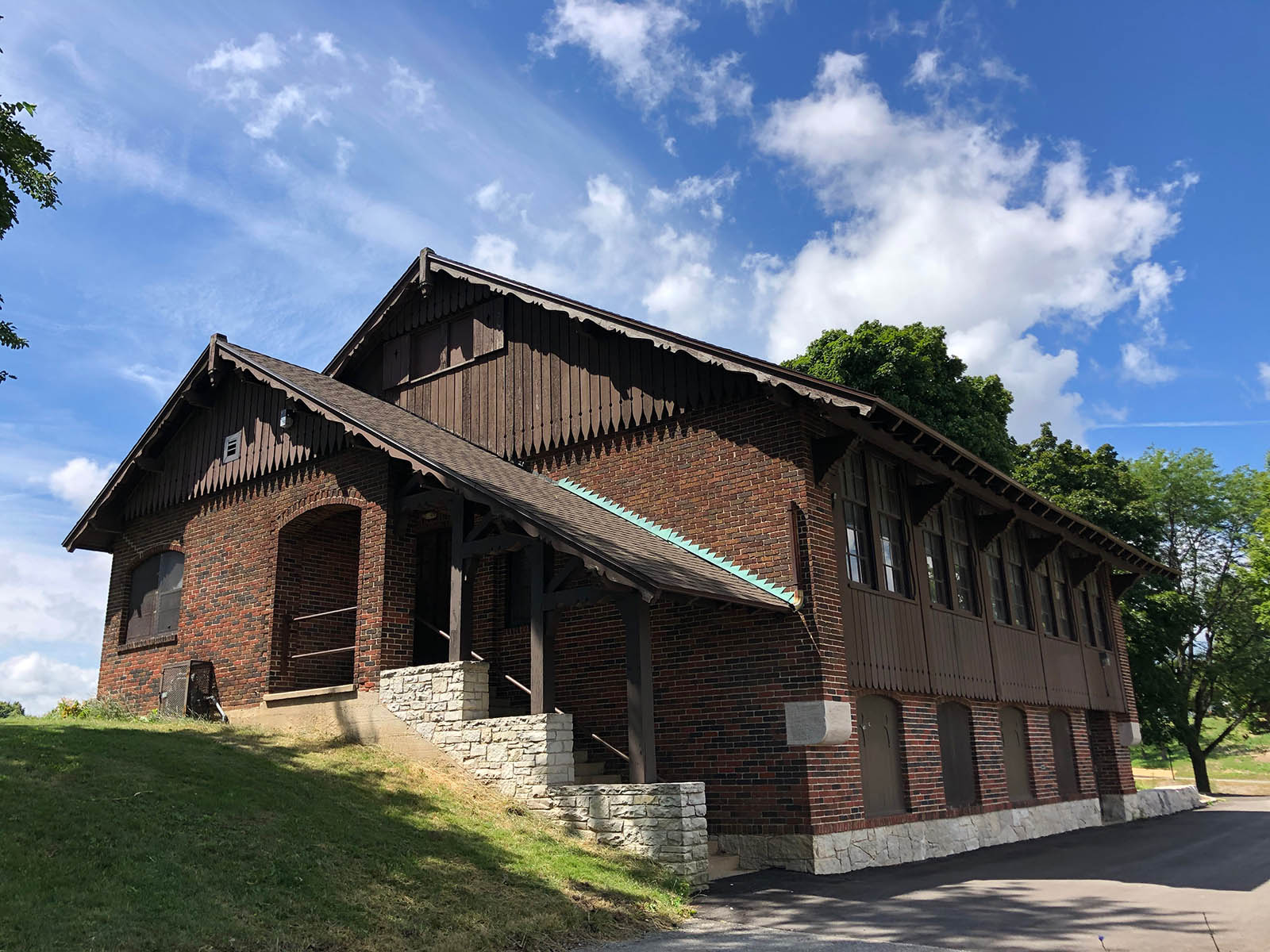 But perhaps the most exciting feature of the park at the moment is the newly restored Kinnickinnic River bed and banks.

In a 1923, Charles Whitnall proposed the parkway system that included the Kinnickinnic River Parkway and three years later the County began to acquire land for the greenways that were meant to boost sanitation and health by "taming" the waterways – to stop erosion and, in some cases, redirect waterways – and creating parkland.

The KK River Parkway in the Pulaski Park area was begun in 1931 as part of the Works Progress Administration (WPA) unemployment relief schemes. 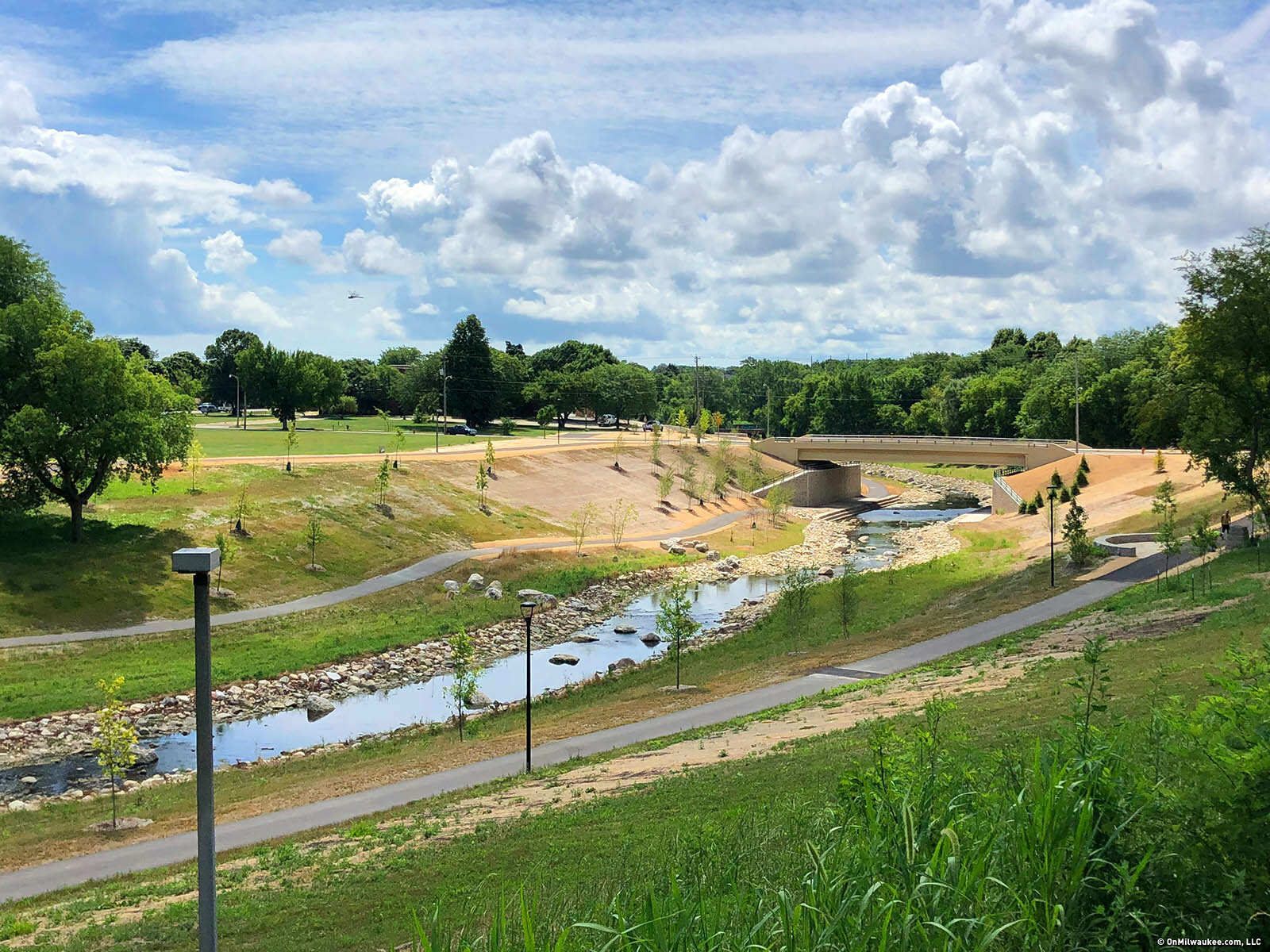 The lining of riverbeds took place for decades.

"In the 1960s, government officials thought the best way to protect the neighborhood and public health was to move the water through the river systems as fast as possible," according to an MMSD document.

"To accomplish this, many sections of the Kinnickinnic River and its tributary streams, including in Pulaski Park, were ‘channelized’ by lining the streams with concrete. The concrete channels were successful at quickly moving water through the system. Unfortunately, it also created safety, water quality and downstream flooding problems."

The concrete also paved over the river’s ecosystem, and anyone living in Milwaukee a few decades ago heard tragic stories on the news of children being swept away when these concrete waterways became whitewater rapids during and after storms.

At the moment, the Milwaukee Metropolitan Sewerage District is in the midst of an $85 million plan to remove two-and-a-half miles of concrete riverbed and riverbank and restore them to their natural state.

A chunk of that work is in Pulaski Park where you can go right now to see the result. More than 1,700 feet of the KK River has been restored here.

"This project is part of a larger effort by MMSD and its partners to reduce the risk of flooding, improve public safety by slowing down the river, improve the natural habitats within the river and along its banks for fish and wildlife, and refresh parts of the park to better support recreation and meet community needs," according to that MMSD document.

With public input and the assistance of partners like Sixteenth Street Community Health Center, located just south of the park on 20th Street, Pulaski Park has gotten a massive makeover. 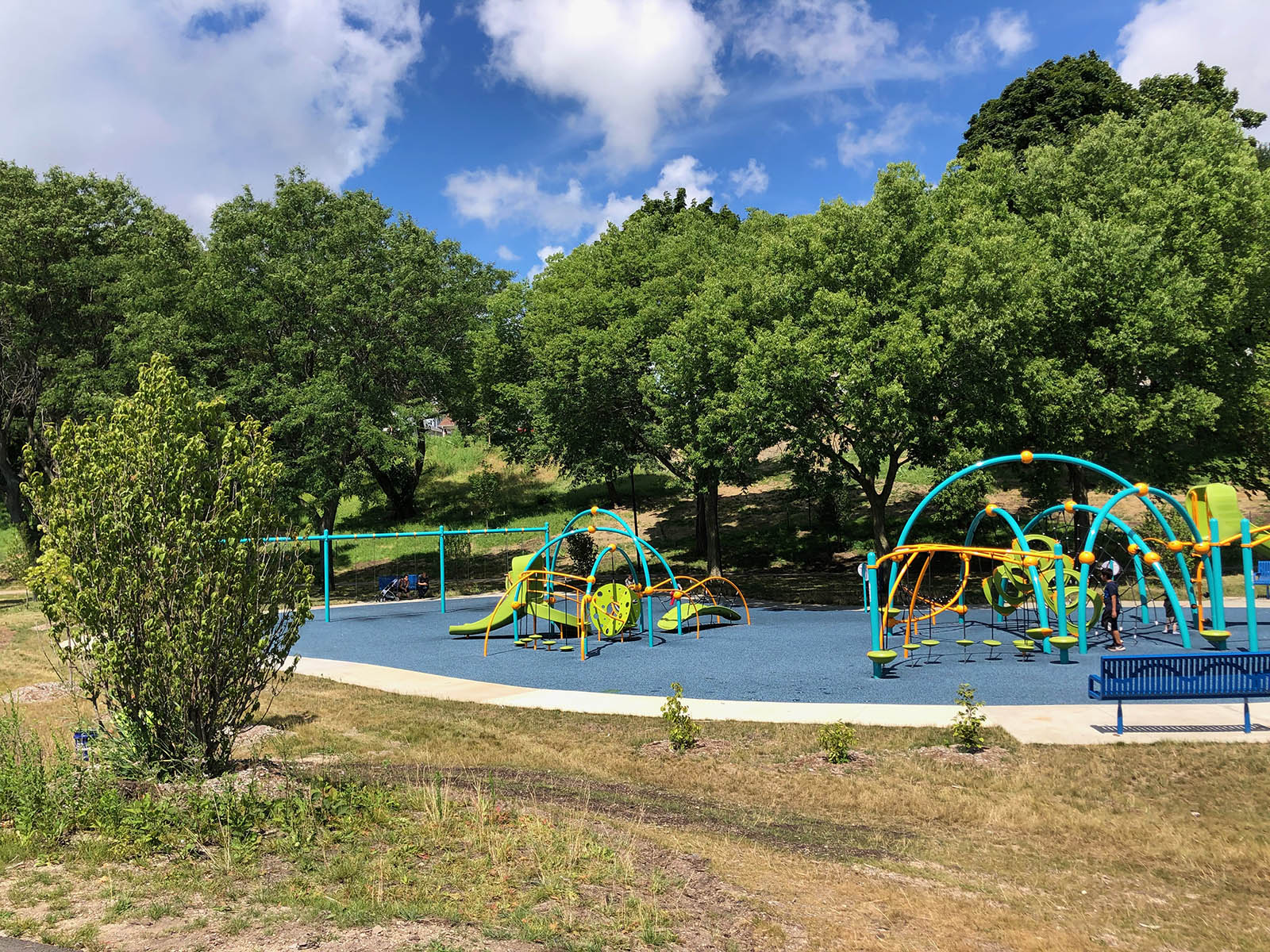 There’s that new playground and the conversion of the tennis courts to a futsal court. The basketball court was replaced and a new pedestrian bridge was built to span the river. Further south at the Pulaski Pool, a new patio overlooking the river was added, too.

But what’s most exciting is seeing the river looking again like a river instead of some industrial runoff drain. 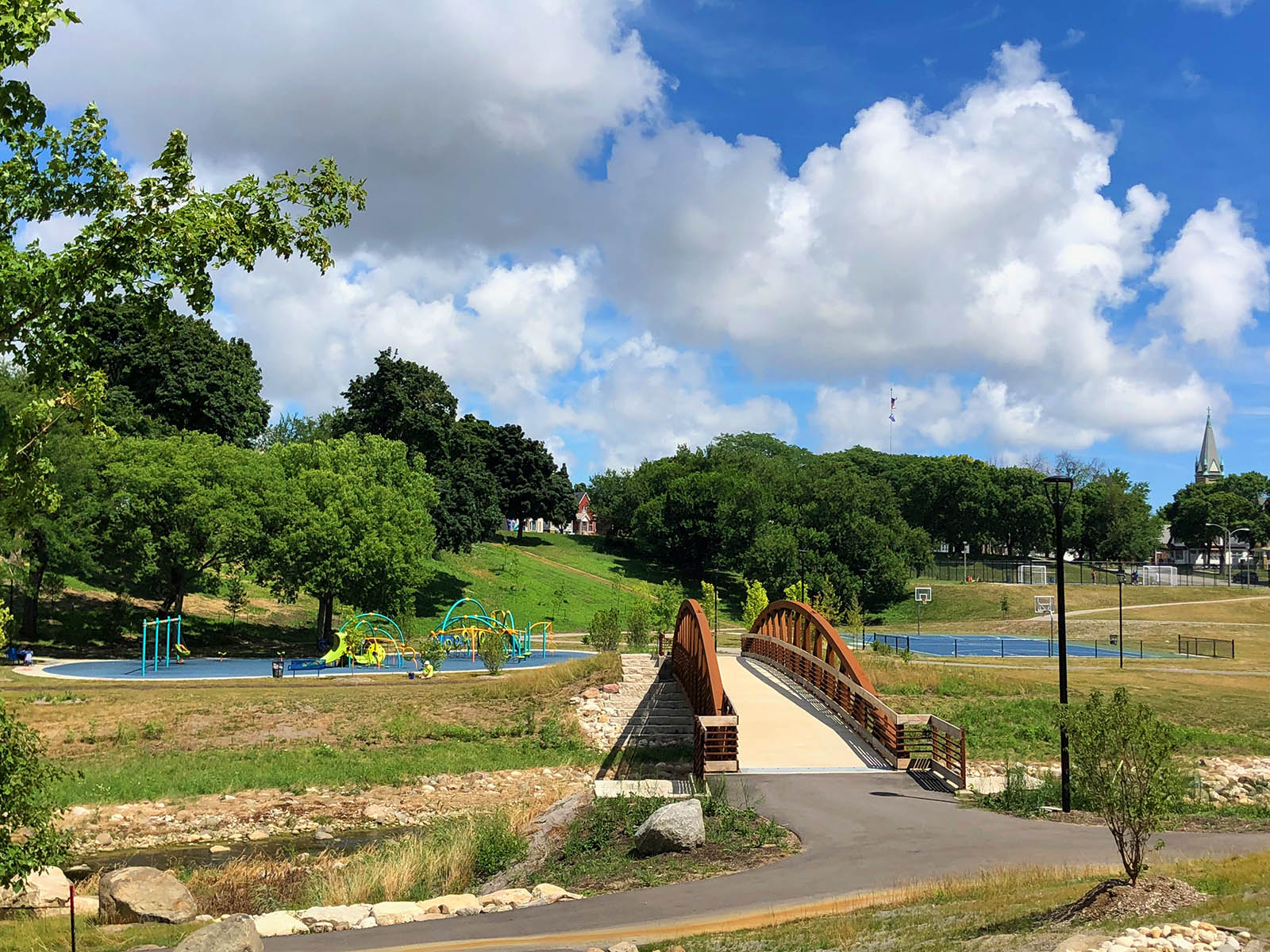 On the hillsides above it there are new native plants and trees and walking trails.

Not only are these plantings attractive, they serve a purpose, according to the MMSD.

"The deeper roots on these native plants will soak up more stormwater, minimize erosion and buffer the stream to prevent pollutants from reaching the river. These areas also provide great areas for butterflies, birds, and other animals to live." 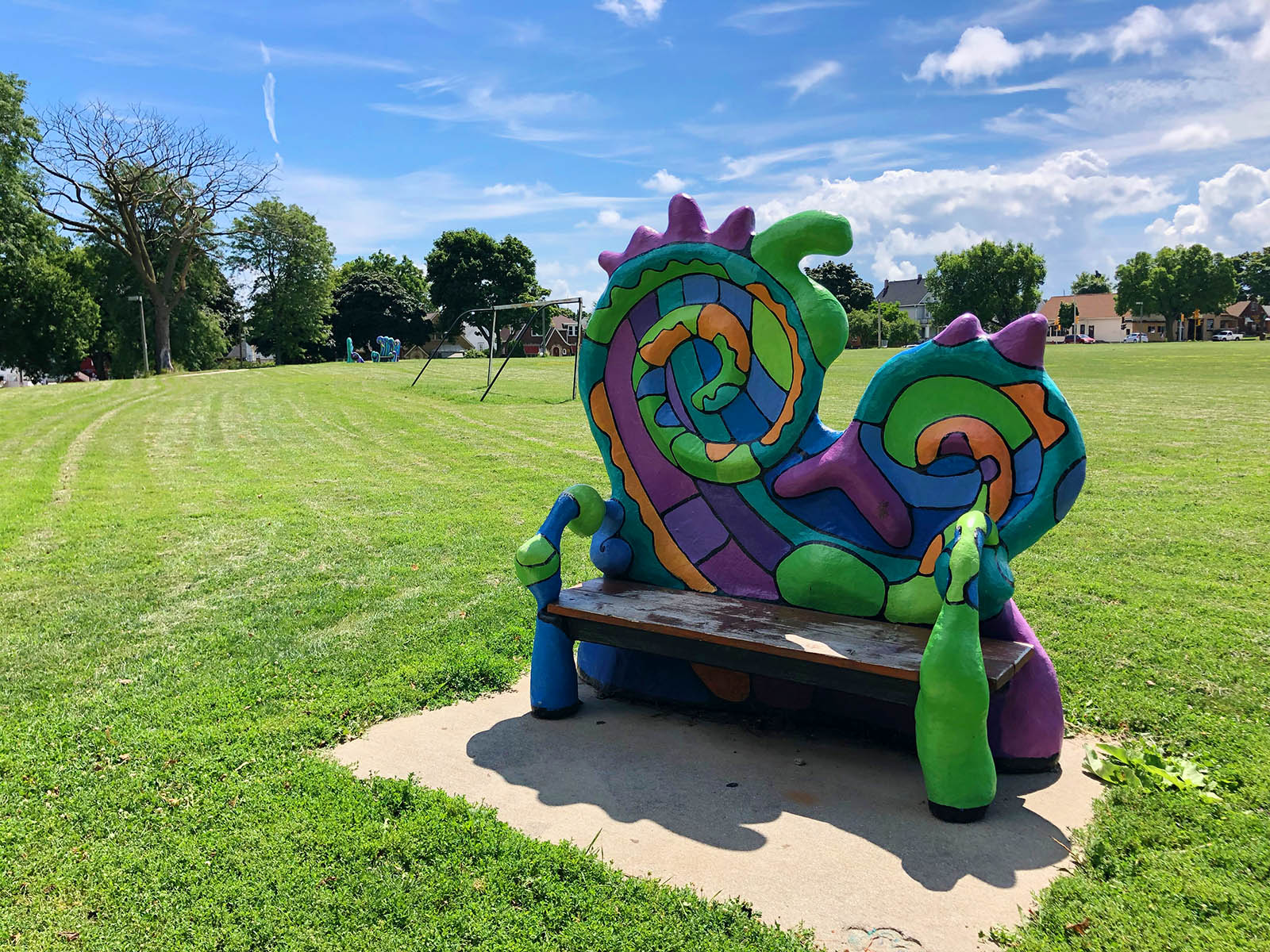 Less immediately noticeable but no less important are the fact that the project reduces the risk of flooding to nearly 700 homes and other buildings, boosts public safety by slowing the river and much improved habitats for flora and fauna in and around the river.

Next, the MMSD will tackle similar work along 2,100 feet of concrete river channel in Jackson Park, which, says Graffin, is still in the planning and design phase.