Most people who love unique and vintage eyeglass frames know of Downtown's Quality Optical. The family-run business continues to thrive despite an unexpected death and a dwindling supply of the popular "cat eye" glasses.

By Royal Brevvaxling Special to OnMilwaukee.com Published Jul 27, 2017 at 8:08 PM

Thanks to many dedicated people and businesses, Downtown is the heart of Milwaukee and the entire state of Wisconsin. This week, OnMilwaukee presents Milwaukee Downtown Week, sponsored, aptly, by Milwaukee Downtown, BID #21. For seven days, we will share stories, videos and photography profiling some of the neighborhood's best offerings and celebrating those who make it so great. Milwaukee Downtown Employee Appreciation Week, by the way, runs July 31-Aug. 4.

According to Penny Zaworski, what sets Quality Optical Service, 806 N. Old World 3rd St., apart from the rest is "detailed attention to personal service." Zaworski has owned and operated the Downtown destination for 22 years.

Zaworski says the customers keep her coming to work. Loyal customers who first came in and experienced her dad’s service won’t let their children and grandchildren go anywhere else. She likes how these second- and third-generation customers continue to come in and tell stories.

Quality Optical has also built a reputation for unusual frames, which brings in customers from all over the city. However, the late ‘40s and ‘50s era vintage frames that Quality Optical used to have cases and cases of has dwindled.

"The ‘cat eyes’ were always popular. But many of these had 12-carat gold frames, places were buying these up just to melt them down, and there’s no way an average person could afford frames like that now anyway," Zaworski says.

They still have the parts to fix all the vintage frames – as well as any others – and this remains a big part of their business.

"We still have stuff that nobody else has – not cookie cutter chain stuff," says Zaworski.

More unusual items still include many old-school ‘70s frames (that really were made in the 1970s), such as aviators and the thick plastic frames which seem ever-popular in hipster culture. Main-line brands include Saint Laurent, Cazal, Versace, Polo, D&G and DKNY. Plus, Quality Optical has a number of different suppliers for their specialty frames.

In addition to a lot of the originals, Quality carries some manufacturer replicas, and will order others. They are starting to carry a lot more frames from Europe. "These have different textures and colors, and are often edgier. But are we going to continue in that direction? We’ll see who continues making the cooler, edgier stuff," says Zaworski.

According to Zaworski, people aren’t buying two or three pairs of glasses like they used to. With the popularity of online optical companies, things just aren’t what they were 20 and 30 years ago, but since Quality Optical repairs frames, they often get a frame-only sale -- and a new repeat customer.

Quality Optical also does re-cuts, which means they will cut lenses to fit into a new frame.

Quality Optical offers one-hour service, sells contacts and glasses for sports and work, as well. And then there’s the $10.95 board, lined with brand new frames that are overstocks and manufacturer close-outs. 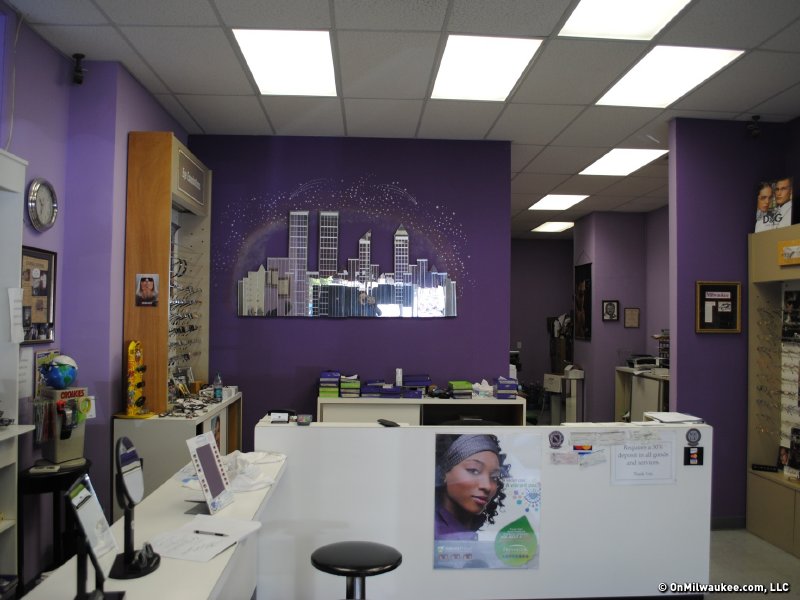 For the past 11 years, Josh Zydzik, who is Zaworski's son, has worked every day except Sunday at Quality Optical. Somewhat jokingly, he says that he’s "forced to work here" and when he’s not at Quality Optical, Zydzik likes to be golfing or shopping.

Including Zydzik, Quality Optical Service has two full-time and one part-time employee. Optometrist Jocelyn Vasco is available for appointments at Quality Optical on Wednesdays. He’s been with Quality for two years.

Everyone at Quality Optical is upbeat and seems to enjoy their work. The good-natured ribbing between family members Zaworski and Zydzik extends to the other employees, which helps create a pleasant, family-like environment for the customers, too.

Quality Optical has always been family run. Zaworski’s father, Walter Mamuzewski, opened Quality Optical 47 years ago. Her mom used to come in on Saturdays to do bills and other paperwork.

When Mamuzewski retired, Zaworski and her brother took over the optical shop. Her brother died of a brain aneurysm while at work in 2001. He had been complaining of a headache all that week. Zawaorski says that the day he died he really felt pain; he was acting out-of-sorts. He went into the back, where he died.

"I thought he was joking around with the counter workers in the hotel lobby, which he often would do. My brother was my best friend. We goofed around a lot; we worked together for years," Zaworski says.

Originally located in the Hotel Wisconsin, Quality Optical moved when the hotel was converted to condominiums. Even though the current location is bigger, there are boxes of stuff under the counter. Zaworski says she will always miss the Hotel Wisconsin location because being among the hotel’s employees and its long-term residents was like working in a big family.

"As the hotel started running down, so did my spot. It wasn’t until I got to the new, bigger, brighter spot, and had room for everything, that I noticed how it had deteriorated," she says.

Operating against common business wisdom, which often turns out not to be all that common and not all that wise, Zaworski moved Quality Optical to its current location in 2003.

"I was told we wouldn’t make it. You’re not supposed to move from an established location, but business doubled the first year alone," Zaworski says.

With a 25-year lease, Zaworski says she’s in for the long haul and even has a 15-year-old daughter who could get into the optical business one day.

"That would be cool, but I wouldn’t tell her it’s what she had to do," she says.

Quality Optical Service is open weekdays from 10 a.m. to 5:30 p.m., Saturdays from 9 a.m. to noon and evenings by appointment.