With a level of pep and enthusiasm normally reserved for cheerleaders, Rachel Platten skipped onto the U.S. Cellular stage Saturday night, singing the opening lines to "Beating Me Up." Despite setting the energy-level bar high, Platten was just getting started.

With a level of pep and enthusiasm normally reserved for cheerleaders at a homecoming rally, Rachel Platten skipped onto the U.S. Cellular stage Saturday night, singing the opening lines to "Beating Me Up." Despite setting the energy-level bar high, Platten proved she was just getting started. For the next 90 minutes, she skipped and danced back and forth across the stage, only slowing down during "Better Place" and "Love Yourself" (a Justin Bieber cover) to sit on a stool, which was more fitting for the songs. Her grin didn't falter, and it wasn't just her. Her drummer, too, had perma-grin; even the bassist, a slot typically reserved for a stoic musician, smiled and danced.

Platten is one of those musicians who talks to the audience between almost every song, explaining why she wrote a certain song or some tidbit about it. As a writer, I love hearing musicians talk about the story behind their music. The only problem this time, and it was probably the only criticism I have of the show, is that it was often hard to hear what she was saying.

While her singing voice is full and strong, her speaking voice is sweet and softer than you would expect. So when she spoke it was often drowned out by the instruments. Which is a shame, because when she spoke louder, or the musicians played softer, her stories were often poignant and sometimes funny. 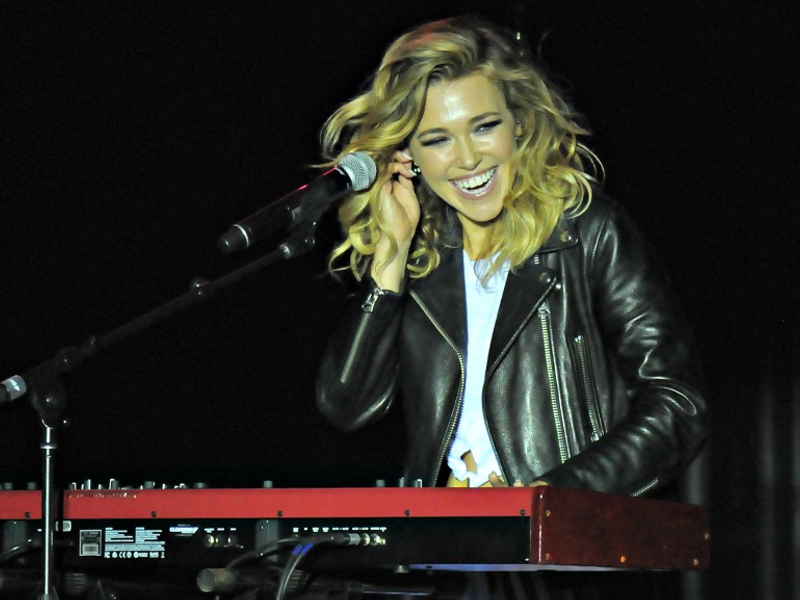 In introducing "Better Place," she explained how her sister never thought falling in love was for her, but then one day called up and said she'd met someone. Platten wrote the song for her sister. Her ever-present grin stretching wider, she said a few weeks ago she got to sing it for them at their wedding, and it was very special.

She encouraged the crowd to spread the love and think of someone who makes our world a better place. It doesn't have to be a significant other, she explained. The song applies to a best friend, a parent, a child, anyone who improves your life by being part of it.

There were a handful of similarly poignant moments throughout the show, and they were a large part of what took the concert from being an entertaining evening to being a memorable performance.

Another such moment came when she introduced "1,000 Ships." The song from her second album in 2011 "made a little blip." She got to tour the country and get a taste of "what was to come." She said when that fell apart, it broke her heart, but it was so much fun.

Several times, she mentioned how grateful she is for everything she's achieved, for the love she gets from her fans and how she tries to remember where she came from and not take any of it for granted.

Perhaps the highlight of the night was when she played a song she said she's always found inspirational and "that meant so much to me" ... a moving rendition of "Gin and Juice" by Snoop Dogg. She even invited the crowd to "sing these beautiful words with me." The juxtaposition of her lovely, melodic voice and the often-profane lyrics was a true thing of beauty.

And, of course, she couldn't end her show without playing the song that propelled her from being the opener for the opener for … you know how it goes, to a headliner, without playing her biggest hit, "Fight Song." She wrote the song when she thought too many doors had closed and her chance at being a successful musician was gone. But she wasn't ready to listen to the voices in her head that said she wasn't good enough. Instead, she listened to her heart, which said she could do it. So she wrote the song and it made her dreams come true. She then belted out her most energetic song of the night, while most of the crowd sang – or yelled – along with her.

After thanking the audience several more times, she got out her cell phone, took a selfie with the crowd in the background and skipped off stage with no less energy than she'd skipped on.

Liz Lincoln Steiner Editorial Assistant @LizLincolnMKE
Liz has been in Milwaukee for almost a decade, after growing up in Madison. It's possible she might like her adopted hometown better, but she would never admit that to her mom. When she's not slaving away at OnMilwaukee, she's probably watching a football game, cross stitching something profane, writing one of the romance novels she publishes under the highly secret nome de plume, Eliza Madison, or some combination thereof. Whatever she's doing, she's drinking Diet Coke.