Could Milwaukee be the next city with rainbow crosswalks?

During a recent visit to Vancouver, This Is It owner George Schneider saw something incredible: bright, rainbow-striped crosswalks, representing the city's support for LGBTQ pride. He liked it so much he decided to bring the idea home to Milwaukee.

During a recent visit to Vancouver, British Columbia, George Schneider was inspired by how deeply the city celebrates the diversity of its people.

Then he saw something really incredible.

Bright, rainbow-striped crosswalks, representing the city’s support for LGBTQ pride, stand loud and proud at the intersection of Davis and Bute in Vancouver’s West End. These visuals really impressed Schneider, owner of This Is It, 418 E. Wells St., and long-time advocate for LGBTQ causes, so much so he decided to bring the idea home to Milwaukee.

On Nov. 5, he pitched an idea on the This Is It Facebook page.

"It was just one of those things where you see something wonderful," said Schneider, "and you think, 'Who can we get to make this happen?' I hoped the Facebook post would inspire conversation and attract people of influence."

Less than a week later, the Facebook post has been liked by nearly 1,000 people, inspiring lively conversation and motivating Schneider to advance the idea further.

"The public has been very supportive," said Schneider, "but the main concern has been vandalism. In the three years since the Vancouver crosswalks have been installed, they’ve seen only one or two vandalism attempts. The other major question has been around maintenance, considering traffic, snow plowing and Wisconsin weather conditions. But if the city commits to this project, we know they’ll use the right pavement paint and simply repaint it as often as any other crosswalk." 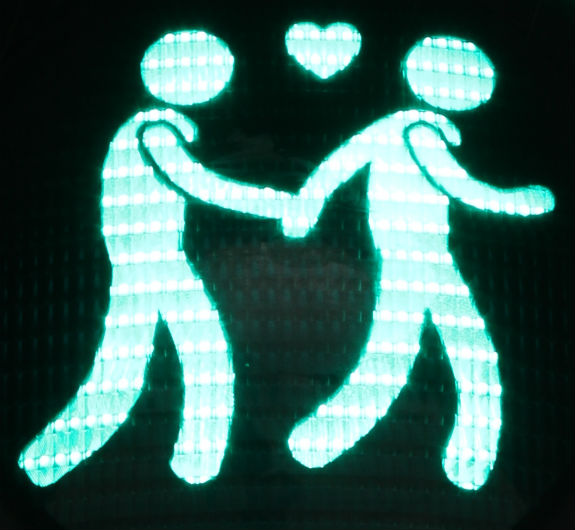 There is a precedent for decorative street painting in Milwaukee. Three years ago, the East Town Association partnered with the Commissioner of Public Works to honor Jazz in the Park with piano key crosswalks at Kilbourn and Jefferson and Wells and Jefferson. Last year, innovative street art was installed at the intersection of South 2nd Street at Freshwater Way (formerly Pittsburgh Street) to commemorate the Global Water Council and Reed Street Yards developments.

When it comes to LGBTQ monuments, our city hasn’t exactly been a leader. Although 18 national landmarks, including the White House, lit up for marriage equality on June 26, 2015, not a single Milwaukee building was illuminated. Some leading Milwaukee companies, including The Pfister Hotel and Northwestern Mutual, lit their facades with rainbow lighting in June 2016 to honor victims of the Club Pulse shootings. Milwaukee’s City Hall was also proudly decorated with the largest LGBTQ pride flag in Wisconsin for over a week. 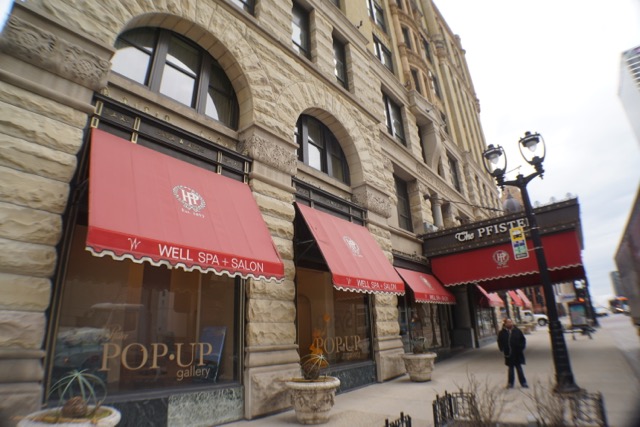 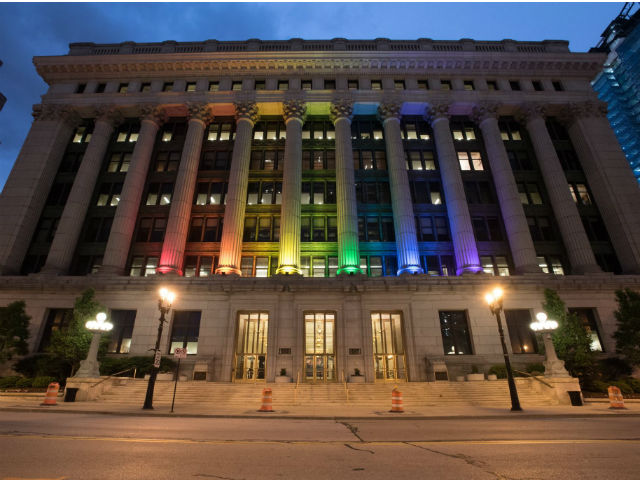 Curiously, the U.S. Bank tower, as the tallest building in Milwaukee and one of its most recognizable landmarks, seems to have abandoned its longtime tradition of illuminating the roofline with different colors for holidays, sporting events or national happenings.

"With the Milwaukee Streetcar coming to East Town, a rainbow crosswalk would be a wonderful visual for visitors to see and know they are welcome here," said Schneider. "It would carry lasting meaning as a continuous, year-round celebration of our LGBTQ citizens.

"But this is not just about This Is It. Crosswalks would be just as appropriate at the intersection of 2nd and National, in the heart of LGBT nightlife."

George knows a thing or two about LGBTQ visibility. When the Marquette Interchange was completed, he worked with the Wisconsin Department of Transportation to light the underpasses with pride colors during PrideFest Milwaukee weekend.

Without any exterior signage or storefront, This Is It was long considered a "secret" or "hidden" bar. That changed in 2013 when Schneider and longtime operator Joe Brehm decided to redecorate the exterior with bright accents and a pride flag. 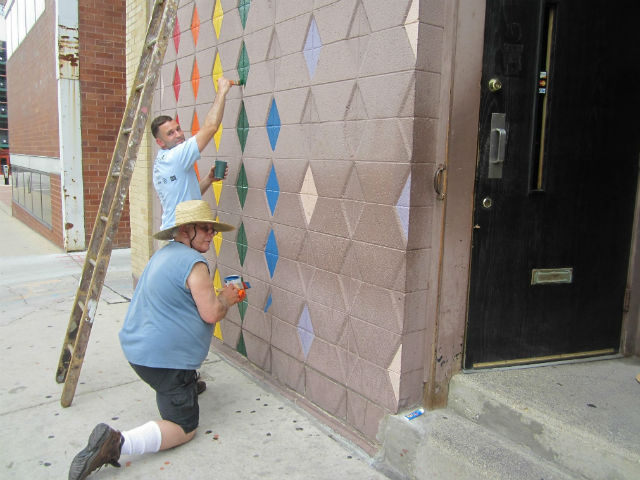 "We had a real problem with people not finding us," explained George. "While there were some who appreciated the speakeasy charm, we wanted to make a change that reflected that times have changed. The community as a whole had embraced us. We became an active member of the East Town Association. We wanted to establish a prominence. When LGBTQ bars are disappearing, sneaking into back doors and staying hidden is not the best course of preserving your future. And now, nobody has to call us to find us."

This Is It, now the longest operating LGBTQ landmark in Wisconsin and one of the longest running gay bars in the United States, will celebrate its 50th anniversary in 2018.  Management plans to honor the legacies of June Brehm, an early LGBTQ champion who opened the bar in 1968, and her son Joe Brehm, who operated the bar from 1982 until passing away in April 2016. 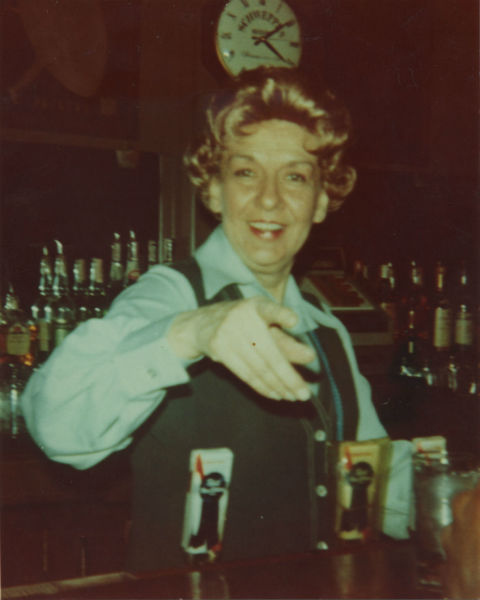 After a long day of touring tavern properties, June arrived at 418 E. Wells St., took one look around the room and said, "This is it – we’re not going anywhere else." She had many gay friends and sought to create a safe space where they would be treated as well as any other customer. This was a policy June defended with fury. As the legend goes, June became fed up with her business partner complaining about an ever-increasing gay clientele. She pulled out two $20 bills and asked him to tell her which was gay and which was straight. She said, "Until you can tell me the difference, we’ll serve whoever the hell we want."

As we approach a week after the election, the campaign for greater LGBT visibility in Milwaukee is growing. Individuals have already stepped forward offering sponsorship support for the rainbow crosswalk project. What began as a conversation has become a call to action.

Where can this go from here? Sandy Rusch Walton, communications manager for the City of Milwaukee, confirmed Friday that there is currently no formal process for requesting a decorative crosswalk. Since the city has done so few of these, the Commissioner of the Department of Public Works reviews each request on a case-by-case basis.

George is hopeful that the project will move forward.

"We’ve got a great city here," said George. "And it would be terrific for Milwaukee to take a stand against the hateful rhetoric of the past year. Crosswalks would say we are all-inclusive and supportive of all our citizens. So, let’s do it. It’s high time."

LGBTQ, This Is It, pride, Vancouver, George Schneider

Reclaiming the "B" in LGBTQ