Raised Grain Brewing Company is making progress on its Waukesha facility, which is due to open within a month or so.

Waukesha is likely to have a shiny new brewery and tasting room to enjoy sooner than later, as Raised Grain Brewing Company, 2244 W. Blue Mound Rd., prepares for an early- to mid-September opening.

Construction has been moving on the brewery since last February, and the team expects one of the final elements – delivery of brewing tanks – to happen later this week. You can see progress on the installation of their cooler in this time-lapse video posted on the web site.

Almost half of the 4,000-square foot space will be dedicated to the brewery’s tasting room, a space which will embody both the history and spirit of the Raised Grain brand.

"The name ‘Raised Grain’ is really derived from the idea that we’re elevating grain to its highest form," says co-owner Nick Reistad. "But, it’s also a woodworking term that shows we’re still a little rough around the edges."

And Reistad knows a little about that end of the business. His father, Greg, was a long-time cabinet-maker who once owned the A.J. Pietsch Co. – best known as the woodworking shop immortalized in the Old Streets of Milwaukee exhibit at the Milwaukee Public Museum. When he sold the business, he was able keep a good deal of the wood from which the building was made.

That wood, says Reistad, will form the top of the taproom bar, with sides constructed from Peroba wood repurposed from the veneer of old private rail cars. 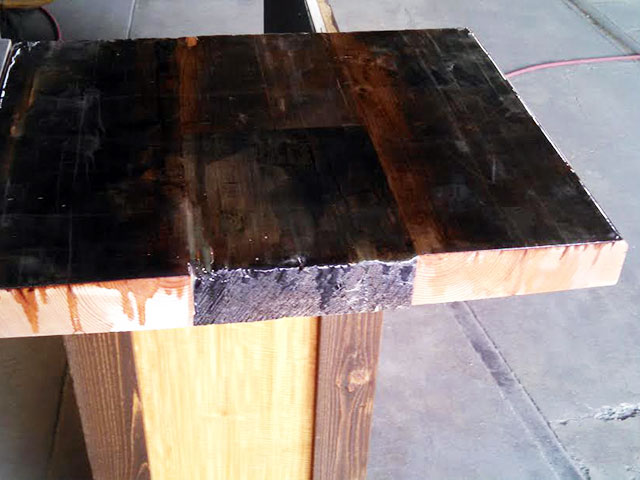 "We’ve chosen warming colors for the taproom," says Reistad. "So it will be a place that feels warm, even in the winter. We’re really focused on creating a comfortable environment where people can come in, hang out with friends, and start conversations with us about the beer."

Reistad, a professional cyclist turned marketer, is part of a team of three who own the new brewery. Other partners include dermatological pathologist and accomplished homebrewer, Dr. Scott Kelley and entrepreneur Kevin Brandenburg. All three grew up in the Brookfield area, but didn’t connect until last year, when Brandenburg saw an opportunity for them to work together.

"My parents and live in the same neighborhood as Kevin [Brandenburg]," says Reistad. "I knew him growing up, and I always joked about starting my own business. Eventually, I must have joked about it one too many times because he connected me to Scott [Kelley] and James [Gosset]."

The crew had a number of things in common, most significantly a passion for beer. So, in September 2014, they started talking about the potential for starting a brewery.

"We’ll be focusing on what we call ‘boldly brewed beer’," says Reistad. "Our aim is to take classic beer styles a bit farther, pushing the envelope wherever we can."

Kelley will oversee production as brewmaster, alongside Dr. James Gosset, who works as a vascular surgeon by day. Both doctors are also accomplished home brewers, and Kelley’s family has roots in the brewing industry (his father was a chief financial officer at LaCrosse’s G. Heileman Brewing Co.).

The crew isn’t cutting any corners when it comes to investing in the brewing process, says Reistad, who notes that they’ve installed a reverse-osmosis treatment system, which will allow them to build their profiles from zero.

Their medical backgrounds also give them a leg up, notes Reistad.

"There’s both great science and great palates behind their brewing," he says. "Being able to understand the yeasts and interactions that happen during the brewing process is a real advantage."

Raised Grain, which anticipates initial production of about 700 barrels in the first year, plans to roll out a fairly wide selection of beers at opening, including IPA’s, Scotch ales, stouts and just about everything in between. As many as 12 will be available to the public in the tasting room, which will also provide food initially with the help of local food trucks and carts.

"We’ll eventually roll out limited food options, including cheese," says Reistad, noting that the brewery’s Paradox Red (a tongue-in-cheek name, derived from the fact that the beer is being brewed by two doctors) pairs perfectly with Wisconsin-made Dunbarton Blue, a blue-veined Cheddar.