There is not a large number of works in Milwaukee Art Museum's Rashid Johnson show, called "Hail We Now Sing Joy," but all the works in the show, which runs through Sept. 17 in the museum's Baker/Rowland Galleries, are large ... and engaging for a variety of reasons.

There is not a large number of works in Milwaukee Art Museum’s Rashid Johnson show, called "Hail We Now Sing Joy," but all the works in the show, which runs through Sept. 17 in the museum’s Baker/Rowland Galleries, are large.

In fact, the first one we see upon entering is the colossal "Antoine’s Organ," which at more than 10 feet tall is the biggest of the Chicago-born, New York-based artist’s architectural grid installations ever on view in the United States.

The work is a grid of empty boxes – a bit like an old playground monkey bar set – filled with a variety of materials. It’s also a work that’s alive, at least part of the time; see below for more on that. 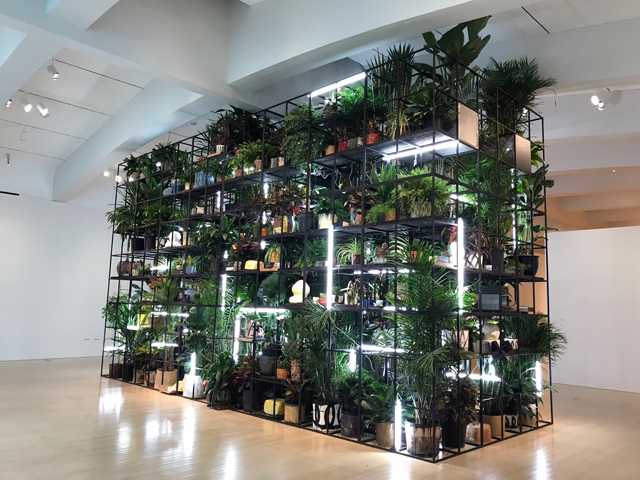 "Rashid Johnson’s work is on everyone’s radar right now as he tackles contemporary issues, including the complexities of living as a black American, that are especially important in today’s political and cultural climate," said MAM Curator of Contemporary Art Margaret Andera.

"‘Hail We Now Sing Joy’ gives visitors the unique opportunity to see a significant body of work from one of the current generation’s most celebrated artists."

The show is especially significant in that it is the first large-scale show in the Baker/Rowland Galleries to focus on a single contemporary artist. Johnson’s work was also featured in MAM’s "30 Americans" exhibition four years ago.

Here are a few things that caught my attention: 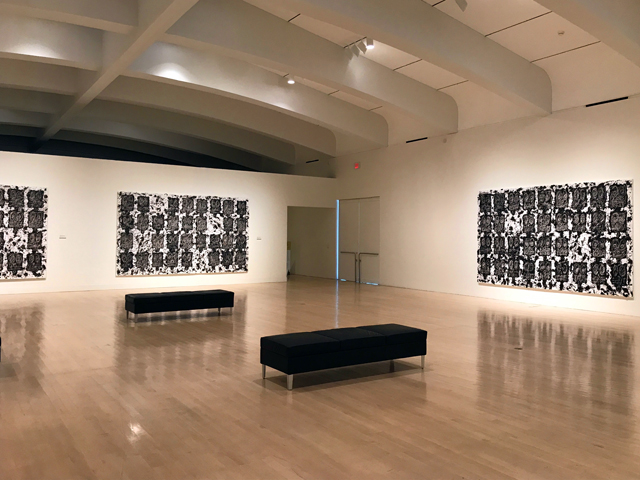 Other than "Antoine’s Organ," the exhibition is entirely made up by works from three series. "Falling Man" works mix plants, books, mirrors, shea butter and wax on ceramic tile, and include images of falling figures that a MAM release suggests "recall the pixelated animations from video games that Johnson played as a youth and can be interpreted as flying heroes or as chalk outlines from crime scenes." 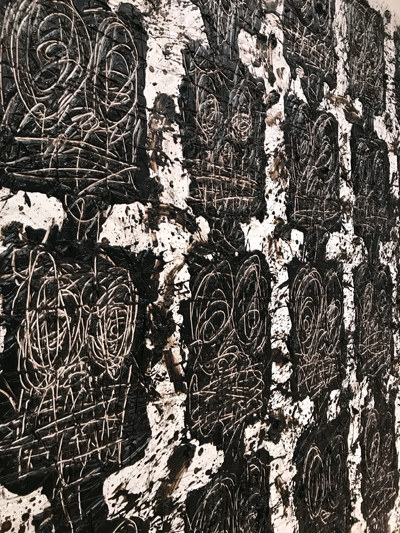 The "Escape Collage" paintings in the adjacent room show tropical scenes that Johnson has said grew out of his childhood ideas about success. "As a kid," he has recalled, "I remember thinking that if you could actually live in a place with palm trees, if you could get away from the city and the cold, that meant you’d definitely made it."

Finally, in the last of the four large spaces carved out of the Baker/Rowland Galleries are the striking "Anxious Audience" panels of white ceramic tile covered with rows of faces etched into black wax, showing a variety of agitated expressions, which have a simplicity and roughness that recall the work of the late Jean-Michel Basquiat. I found these to be the most striking works in the show for their stark images and the emotional impact of the range of facial expressions. The single empty space in each panel was also a little disconcerting, forcing one to consider the absence that each represents. 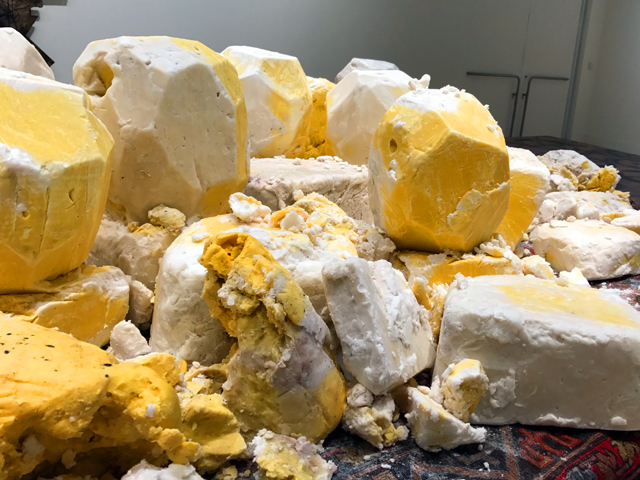 Three varied and wide-ranging series and one soaring installation, all fashioned from a rather small palette of materials, including live plants, black soap, wax, African shea butter, white ceramic tile, books. It’s impressive what Johnson can achieve with these simple, and often unexpected, elements.

3. Works visible inside other works 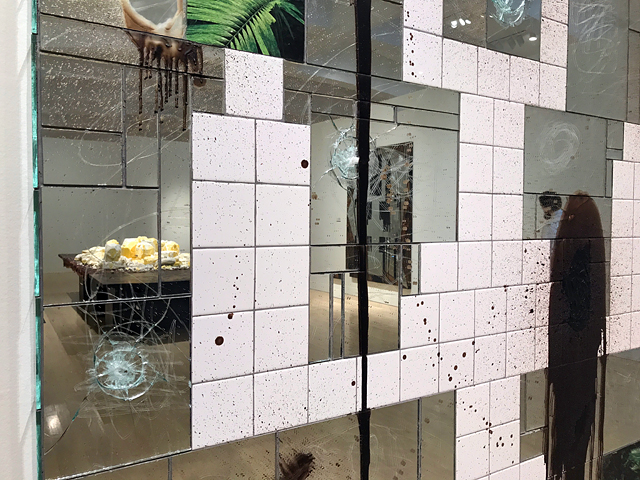 One material that makes Johnson’s work especially interesting can be seen in the gallery showing the "Falling Man" works: mirrors. The mirrors allow you not only to see yourself reflected in these works, drawing you in and forcing you to consider how you might fit into the world that has inspired these works, but also they provide glimpses – in reflection – of the other works in the gallery, creating interesting visual perspectives that may be unique to each visitor. 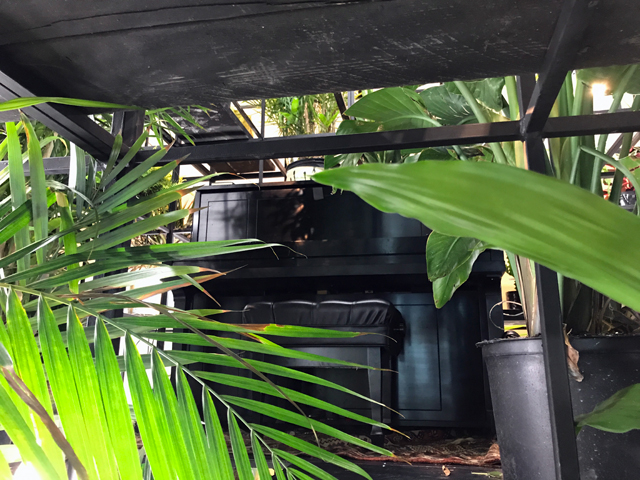 Amid all the lush, green flora, the small low-res video monitors, well-ordered stacks of books by African-American authors and piles of African shea butter chunks is a black upright piano. "Deep within this Edenic environment inspired by the African diaspora," reads the adjacent wall panel, "is an upright piano that musicians will play at scheduled times throughout the run of the exhibition. (The installation is) named for classically trained pianist and music producer Antoine Baldwin, also known as Audio BLK." 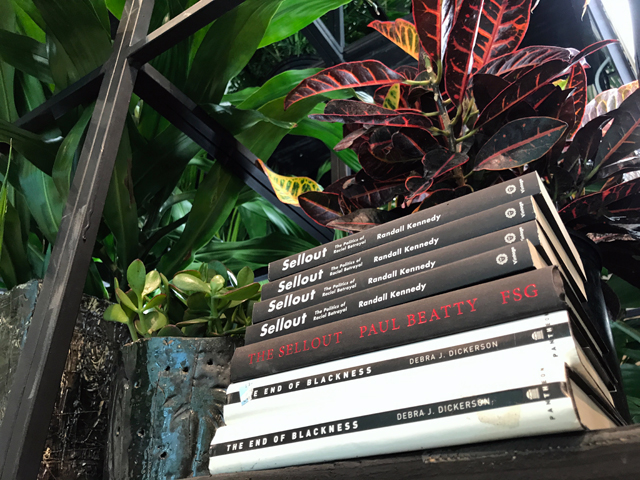 As a lifelong book lover and erstwhile independent bookseller, you’ll be unsurprised that I took note of Johnson’s use of the printed word in his works. Not by actually painting or scraping words into the works, but rather via the inclusion of small stacks of published books, typically multiple copies of a few works.

At the end of the exhibition there is a narrow yellow ledge with copies of books by Johnson, and nearby there’s a low table surrounded by chairs. The table holds multiple copies of Ta-Nehisi Coates’ "Between the World and Me," "Sellout," by Randall Kennedy, and Richard Wright’s classic "Native Son." 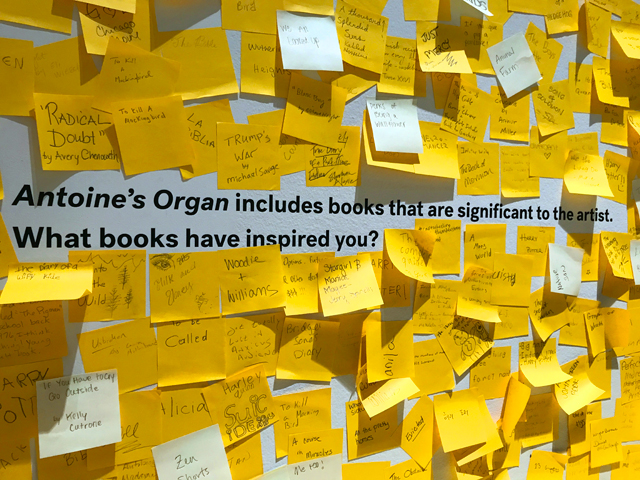 Johnson has included a wall that is now covered with yellow Post-It notes bearing the inscription, "‘Antoine’s Organ’ includes books that are significant to the artist. What books have inspired you?" (At least one "Falling Man" work also includes a small stack of books, two copies of "Eldridge Cleaver.")

Milwaukee Art Museum is closing again due to COVID