There's a new food truck on the streets. And it's run by brave, thick-skinned souls who have decided to brave the cold winter weather in order to bring nourishing fare to the masses.

There’s a new food truck on the streets. And it’s run by brave, thick-skinned souls who have decided to brave the cold winter weather in order to bring nourishing fare to the masses.

Raucous Daucus is the whimsical name of the truck, which is is named for the plant "daucus carota" also known as "wild carrot" (or maybe more so as Queen Anne’s Lace).

It’s an apt moniker. After all, co-owner Loulou Guolee, who runs the truck with her husband Johnny, has spent the last decade working as a personal chef under the moniker Carrot Bomb Catering, a business which focuses on scratch-made dishes made with ingredients sourced primarily from within an 80-mile radius of Milwaukee.

Outside the catering business, she’s also made a name for herself cooking meals for visiting bands and catering events at Turner Hall. In fact, she says Raucous Daucus is the product of years of contemplating how to make her catering business more accessible.

"The truck really seemed a logical next step for the business," notes Guolee. "People have been coming to me for food for so long, and it’s time to bring that to the streets, to people who can’t necessarily afford a personal or catering. Everybody deserves to eat great food."

And good food is what folks will get when they visit the Raucous Daucus. Although the truck doesn’t have a regular menu (dishes are seasonal and always changing), Guolee says
Winter options focus on items like hearty soups with homemade and rustic style breads along with weekly grilled cheese specials and entrees.

"We’re very eclectic in terms of what we offer for the catering business," she says. "We work with every client to create unique interesting menus. And that carries over to the truck. We always have at least one meat-based soup and a vegan soup. We’ve done a bone-broth based ramen and grass-fed beef chili with all the fixings. On the vegan side, favorites have included coconut curry dal and wild mushroom soups."

Pricing on items vary, but soups are generally priced between $4 and $6 (with quarts for $12). Loaded chili is $8-10 per serving and specials are typically priced in the $4-12 range. 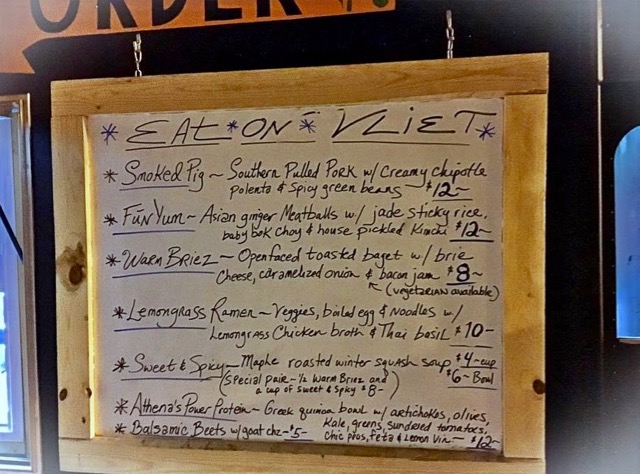 The truck itself displays a whimsical mix of hand-painted art – including an interpretation of the Milwaukee skyline, a black sheep and a rooster which Guolee refers to as the "Disco Chicken" – much of which was designed by Jeremy Kirk of Vantage Point Tattoo. There’s also the playful Raucous Daucus logo, which was designed by the equally creative folks at RevPop.

Guolee says the vision for the business really centers on collaboration, whether it’s partnering with area businesses for pop-ups (she notes they’re planning a future event at Dandan in the Third Ward) or working with bars who don’t typically serve food to create custom menus that fit their vibe and offerings.

"The collaboration element is really important," she explains. "I’ve been stuck in a kitchen for a long time. And now it’s about getting together with other chefs, artists and makers and really having fun and working together."

Among her ideas for partnerships, she mentions that she’s excited about the potential for partnering with artists or galleries to provide food for art openings or events. "It would be really fun to emulate the art with food," she says. "It’s that sort of thing that really sparks my creative energy."

Guolee admits that starting a food truck business during the Wisconsin winter isn’t the easiest thing in the world. But, she says it’s worth it.

"Starting in the winter is tough, but we’re breaking rules with everything about this business … from the name, which few people to the sheer variety on our menu," she says. "And yet, it brings tears to my eye, but on multiple occasions we’ve sold food to people of all different ages and walks of life … and I see them all sitting, sharing food together.

"That's really what I love about the truck: that it can be this big round table for the community. And we view food as medicine. So it’s as much about bringing great, healthy food to people as anything else."

Where you can get Raucous

Currently, the truck hosts a weekly event called "Eat on Vliet," during which Raucous Daucus is parked between 50th and 55th and Vliet Streets every Friday between 4:30 and 8 p.m.

"We’re really trying to encourage people to put on their boots and coats and come out and get food for dinner," says Guolee, noting that the truck generally offers larger sized portions, which can be purchased and taken home for feeding a family.

Guolee says she also plans to park the truck at the Polar Bear Plunge on Jan. 1, as well as other events around town.

Sweet, salty, bitter, sour: It's all about flavor at Bad English

Downtown food trucks: Your guide to mobile eats every day of the week